Anytime we issue a trade alert to members at EarningsBeats it must carry a minimum reward to risk of at least 2 to 1. In fact we rarely consider getting involved in a trade unless the potential reward to risk is at least 3 to 1 or higher.

The concept of reward to risk is simple; we don't want to put capital at risk unless it's worth while. This means there needs to be a disproportionate upside to downside potential in a trade to make it worth pursuing.

A perfect example of a high reward to risk trade is Square (SQ) where we issued a trade alert to members on April 6 with an entry price of $45.15, a price target of $49.50 and a stop loss of any close below $45. 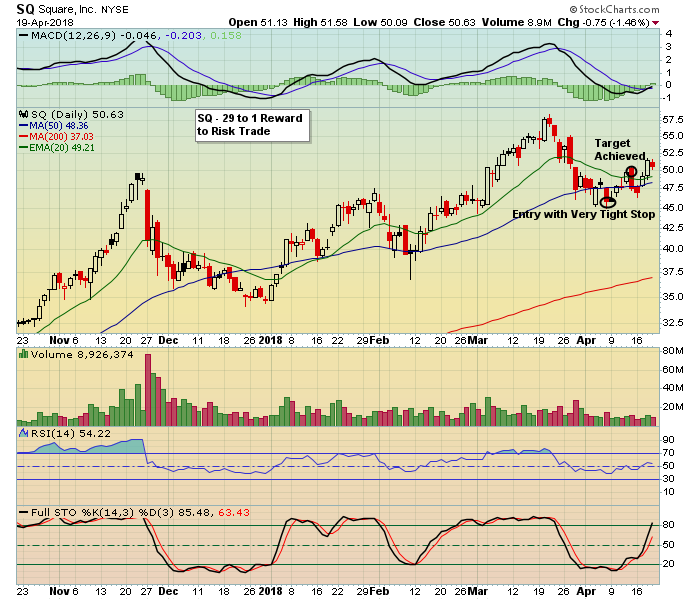 As you can see above, the stock did what we thought it would do, hitting our price target in just a few days while producing a return of 9.6%. On the flip side, the risk to the downside of just .15 was minimal, making this a 29 to 1 reward to risk trading candidate.

Of course a reward to risk ratio of 29 to 1 is rare. But it's not so rare to uncover stocks that have the potential of producing high upside to downside potential, especially stocks that report strong earnings, and especially if you are willing to be patient while waiting for a stock to come to you on your terms. An example is Gap, Inc (GPS) which recently reported solid earnings but had difficulty gaining any traction while pulling back to a key technical level; the 200 day moving average, a level it had remained above since August of last year. 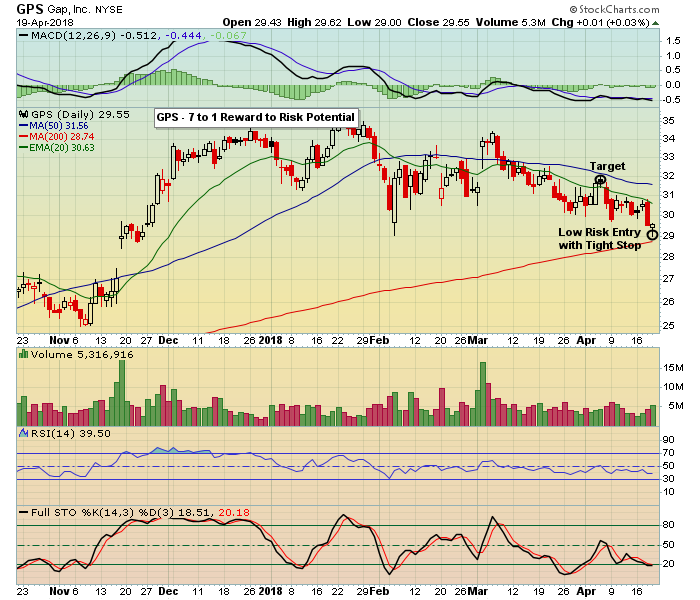 We issued an alert on GPS to members this past Thursday with an entry price of $29.36 with a stop of any Intra Day move below $29 and a price target of $31.80.  so a 7 to 1 reward to risk potential. The trade went against us representing a tolerable loss of 1.2%. Had it worked in our favor it would have represented a gain of 8.3% making it well worth the risk.

I'm pointing all of this out since Q1 earnings season is well underway and there should be an abundance of high reward to risk trading candidates surfacing over the coming weeks. In fact, I am going to conduct a webinar this Monday, April 23, where I will be discussing some potentially high reward to risk trading candidates, including companies that have recently reported earnings as well as some that will be reporting over the next few weeks. I will also demonstrate how we set specific price targets and stop losses, the two critical elements requisite to achieving superior risk adjusted returns. This is a FREE event so if you want to join me just click here.

When you get involved in a trade you are putting your personal capital to work. You need to do what you can to protect that capital and even better yet produce solid returns by focusing on those stocks that show high reward to risk potential.