When we were young, we learned many things from our parents, older siblings, and teachers.  Most of us generally accepted them as fact and did not bother to check to see if they were in fact true.  Hey, I remember my Father telling me that if a turtle bit me, it would not turn loose until there was thunder.  I guess it worked as I never got my fingers close to a turtle.  And I was always concerned when a black cat crossed my path.

George Washington, our first President cut down a cherry tree when he was a boy.  His father saw the tree and asked young George if he cut it down.  Young George said, “Father I cannot tell a lie, yes I did.”  What a fantastic story revealing that our first President and General of the Continental Army was an honest boy.  Great story to pass on to your kids when you catch them stretching the truth.  Be careful though, with internet search engines, they might find out that the story is not true and ask why you lied to them.  Parson Mason Weems wrote the story in the early 1800s (Washington died in 1799) when he was trying to humanize him in a biography he was writing.

Where was the battle of Bunker Hill fought?   Answer later.

Okay, one more.  How many believe that in the northern hemisphere, December 21st is the shortest day of the year.  Kepler’s Second Law of planetary motion can reveal the answer; a line joining the Earth and the Sun sweeps out equal areas during equal intervals of time (see graphic below).  The Earth tracks an ellipse around the Sun.  On December 21st the Earth is at is closest point to the Sun, which means the arc it creates on that day is much larger than when the Earth is furthest from the Sun on June 21st.  If an astronomical day is defined by a reference to a shadow made by the Sun, then it takes longer for that to occur on December 21st because of the larger arc.  Hence, December 21st is the longest astronomical day.  The confusion lies in the word “day” which is confused with the period of daylight.  In Astronomy a day is the complete rotation of the Earth relative to the Sun.  The Shortest Day comment would be correct if you asked what the day with the shortest period of daylight is. Hopefully, you know that a day is not 24 hours; that is just our way of attempting to measure it. If, by chance you do, please explain Leap Year.  And the Battle of Bunker Hill was fought at Breed’s Hill in Charleston, Massachusetts.  I have many more, but need to move on. 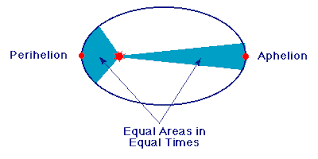 Be honest with yourself (directed at the non-StockCharts.com folks, of course).  Did you believe any of those and were surprised that they were not factual?  The purpose of that little exercise was to then ask this simple question:  What about investing and finance do you believe that just might not be factual?  Have you verified that factuality of everything you believe about investing?  Trust me, I didn’t for years, maybe decades.

So let me just hit upon a few of the big myths of investing.  Again, there are many.

Diversification will protect you

Chart A shows a number of Vanguard Mutual Funds from early 2000 until the summer of 2007.  Clearly diversification helped and appeared to work well even considering this was during the bear market from 2000 to 2002.  The Bear of 2000-02 was very different than the one of 2007-09.  I call this chart “Diversification Works.” 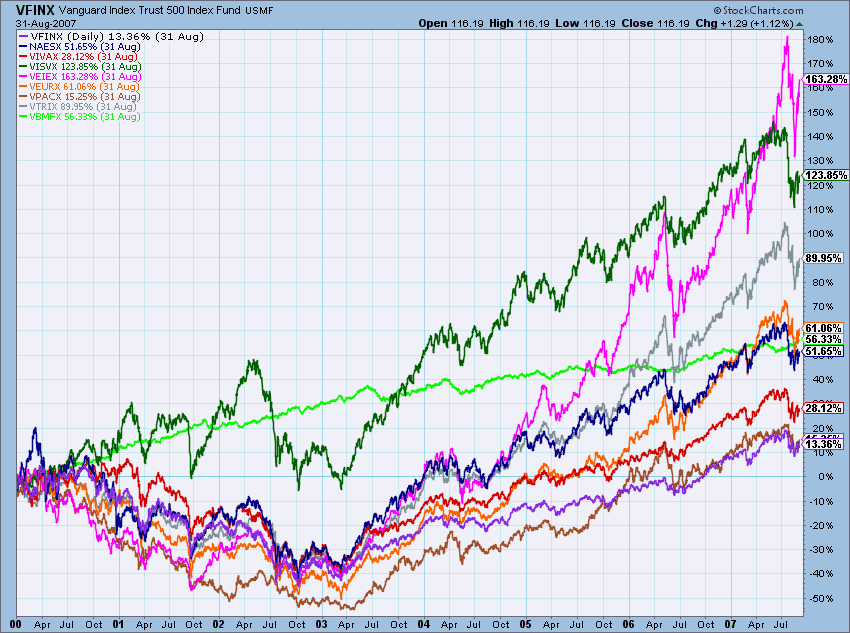 Chart B shows those exact same mutual funds from October, 2007 until March, 2009.  I call this chart “Until It Doesn’t.”  There is absolutely nothing wrong with diversification, use it; just don’t use it as a strategy.  Some have referred to it as a free lunch. 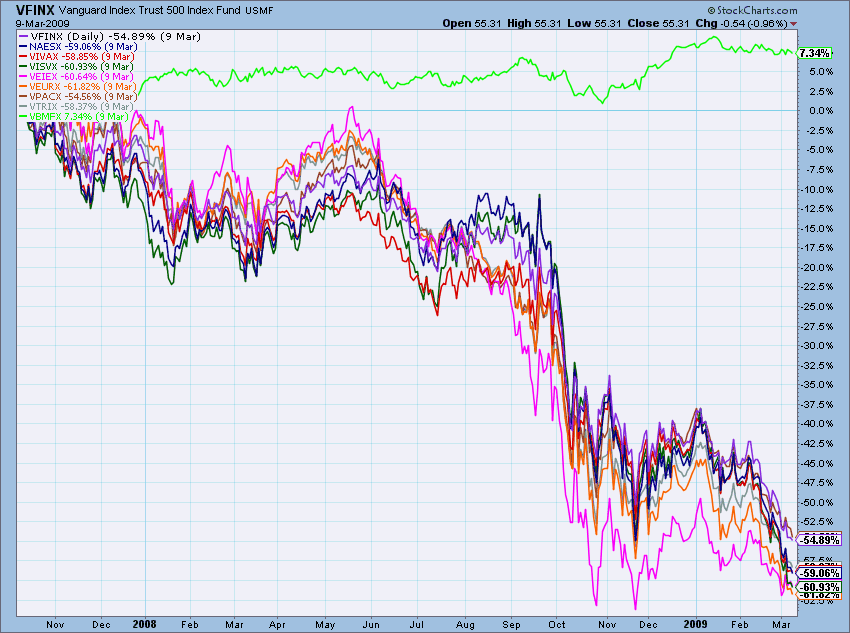 Compounding is the Eighth Wonder of the World

“Compound interest is the eighth wonder of the world. He who understands it, earns it ... he who doesn't ... pays it.” Albert Einstein 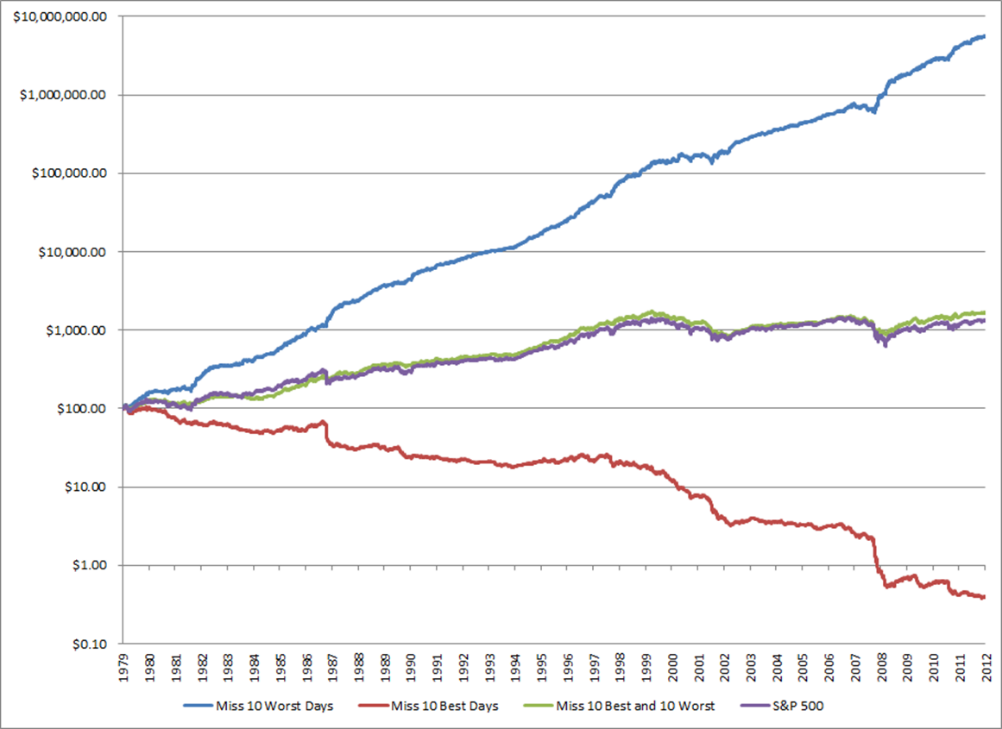 Economists are good at Predicting the Market

“If all the economists were laid end to end, they'd never reach a conclusion.”  George Bernard Shaw

I don’t think I have to explain my position on forecasting and making predictions as I have stated it previously many times.  I find it disappointing that the financial media parades economists through their studios all day long asking them what they think of the stock market.  I think it is because they are usually well-educated and have impressive credentials (impressive to some).  Keep in mind they do a really poor job of dealing with their field; the economy.  The Index of Leading Indicators uses the stock market (S&P 500 I think) as one of their eleven components to assess the future of the economy.  So if you are asking an economist about the stock market, it seems to me to be getting the cart in front of the horse.  John Kenneth Galbraith said once, “The only function of economic forecasting is to make astrology look respectable.”  If you ever need an economist, choose a one-handed one to avoid the typical response – on the one hand this and the other hand that.