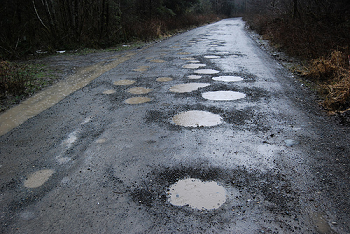 Avoiding Potholes on the Investment Highway

While driving on a busy highway the other day it occurred to me that there are many similarities between driving an automobile and making investment decisions.  I am a very careful driver and believe it or not have had only 2-3 flat tires since 1963.  I think that is because I pay great attention to the road and avoid potholes, debris, etc. and rarely drive on the shoulder as that is where all the bad stuff accumulates.  And don’t forget the huge amount of luck involved.  Avoiding potholes (in this case, anything that can ruin your trip) is not much different than being a rules-based defensive investor.  Sometimes making a point by using an analogy that is common seems to not only make the point better, but causes one to think.  See if any of the ones below apply to you.

I have always been the type of driver that uses a middle lane and avoids changing lanes each time the lane I am in seems slower than the others.  I believe that over time, my lane will get me there just as quickly and more importantly, much safer by avoiding frequent lane changes.  I often witness drivers who always appear to be running late, changing lanes with great frequency, and rarely do they get much further down the road than I do.  One trait of these frequent lane changers is that they seem to be focused entirely on the traffic immediately around them, they are not looking down the road at all.  You can witness this yourself, how many times have you seen someone change lanes only to come to a stop just a short distance away?  The stopped traffic was clearly visible before they changed lanes if they had just looked further down the road.  They were not planning ahead; only concentrating on the traffic immediately around them.

With many people, investing is approached in the same way as the frequent lane changers.  They are focused on the short-term performance and will move their investments from manager to manager (fund to fund, stock to stock) in the hope that the past performance of a manager will translate into the future.  Those who trade themselves are just as guilty jumping from one hot idea to the next.  Extrapolation is a dangerous technique when not used properly.  The late great Peter Bernstein when asked what is an investors’ biggest mistake, said “extrapolation.”  Instead of constantly changing lanes, stick to the one you are in.  Instead of jumping around on investment ideas, stick with the one that has always worked satisfactorily.

Often investors will rush into an investment like a mutual fund and then sit back and essentially ignore it, expecting the fund manager to take care of them.  What they probably do not know is that many, if not most, mutual funds must invest according to the objectives laid out in their prospectus.  For example if you invest in the XYZ Aggressive Growth Fund, the fund manager must invest at least 80% of the fund’s assets in aggressive growth issues.  He has no choice.  He must do this at all times, rarely with any exceptions.  In bear markets, he is going to perform poorly because will be 80% invested in aggressive growth issues.  Remember, he is not managing your money, he is managing an objective.  You are the one that needs to decide which objective to put your money and then manage it accordingly.  There are, fortunately some mutual funds whose objective is a process that is not tied to a benchmark.

I know you have witnessed these types of drivers many times.  They are talking on their cell phones, playing with their iPod or CD player (I almost said 8 track), putting on make-up, singing at the top of their lungs, or just talking to themselves (especially bad if they talk with their hands). The absolute worst are the ones texting on their smartphones; they weave around and generally are slower than the flow.   Bottom line is that these drivers are not focused on driving; these are usually the ones that gradually slide over into your lane and then look absolutely startled when you honk to warn them.  There is no greater fear than to look in the rearview mirror and see a large SUV approaching rapidly with the driver holding a cell phone up to his/her ear and the other hand resting on the top of the steering wheel being used to orchestrate the conversation.

Sometimes people just cannot devote the time and effort to managing their money the way they should.  Many professionals believe that since they have been successful in their professional life, that they can easily manage their money and with the same success.  Of course, many find out the hard way that it is not as easy as they thought.  Or more likely that their professional training did not adequately prepare them for money management and investing.  When I was a pilot I witnessed this trait often.  Many very successful professionals bought small airplanes and learned how to fly.  Because they had been successful as a lawyer, doctor, or whatever, they believed they could fly an airplane just as successfully.  Many mountain tops are littered with small plane wreckage, often of these now unsuccessful pilots.  Investing successfully is a full time job which requires a solid understanding of what you are trying to accomplish, knowledge of the tools you use, and the discipline to do it.

One of the nice things about a large luxury car is the quiet smooth ride it offers.  One of the dangerous things about a large luxury car is the quiet smooth ride it offers.  Because of the smooth quiet ride, many drivers become unaware of their speed.  In most cases their speed is increasing and they do not notice.  A 4,000-pound car at 70 mph is a lot of momentum (mass x velocity).  Most engineering calculations imply that the stopping distance will quadruple with a doubling of vehicle speed.  Investors can get into the same trap with a long running bull market.  There is an old saying, “do not confuse brains with a bull market.”  Four to five years is a long time and when it comes to investing, as it can dominate one’s mindset. The current bull move is now over six years in duration.  Many completely forget the devastating effect of a bear market, an event that has occurred 15 times in the last 128 years using the Dow Jones Industrial Average.  Those 15 bear markets averaged a drop of about 40% and lasted an average of 82 months from the top until getting back to that level (duration).  There I go...talking about bear markets again.

Okay, my apologies for really reaching with some of the above analogies, but if I made you stop and think about your own situation when it comes to investing then it was worth it.  Over the years I have used several phrases over and over when describing my approach to managing money and investing.  They seem to work pretty well as driving tips as well.

• The only thing worse than being wrong, is staying wrong – If you are lost, don’t hesitate to ask for directions.

• I attempt to keep a balance between safety and return – A powerful engine can be dangerous without adequate brakes.

You may have noticed in the last few articles I am discussing bear markets, corrections, and the like.  This bull market has been a long one but not necessarily a strong one.  As you know I do not predict, but do believe we are much closer to a bear market as each day passes.   Well, that was prophetic wasn’t it?  Sorry!  I just think it is time to pay much closer attention to the market so you won’t give back all of your gains.  Hopefully you are using technical tools to keep your emotions from the decision-making process.

Trade in the right lane,