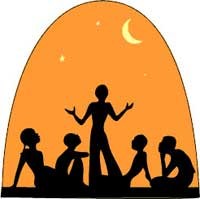 In an article, I published some time ago, The Many Faces of Technical Analysts, one example was the Story Teller.  I captured this idea from Barry Ritholtz when he asked the question “Are you a Trader or a Story Teller?”  Parts of that section are reproduced below.  In that article, I also discussed the Newbie, Hobbyist, Salesman, Practitioner, Academic, and Authors.

Another word for the TV experts, talking heads, special guests, pontificators, gurus, and those that are part of the endless parade showing up daily in the financial media.  I remember I was on a panel in front of about 75 advisors on May 6, 2010 in Dallas, TX along with representatives from GS, JM, and LG.  I’ll use initials instead of actual names to stay out of jail, however, these are big investment firms.  It was after lunch and the question from the moderator was, “What is your current portfolio holdings correlated with?”  I knew that we had just sold our last holding that morning and were 100% in cash, but that is not the story here.  The GS guy was first and spoke for almost 15 minutes, talking about Greek bonds, the Federal Open Market Committee, the outlook for medium term interest rates, the housing market, his firm’s outlook for GDP next month, the amount of cash on the sidelines, on and on and on.  Actually, he never answered the question he was asked but he sure did sound like he knew what he was talking about.  Everything he said sounded so well thought out and logical; he was clearly a professional story teller.  The JM guy wasn’t much different, except he covered a few other subjects and the same ones in a different order.  The LG guy sounded like a combination of the first two as he went on and on for what seemed like forever.  Then the moderator asked me and I simply said, “cash!”  Just then a guy jumped up with his Blackberry and said the Dow was down over 400 points.  Needless to say, the audience directed their questions to me.  They wanted to know how I knew this was going to happen.  I apologized for making them think I knew that and explained that as a disciplined trend follower using stops, the market had been going down for almost two weeks; our stops had taken us out.  Simply good disciplined trend following accompanied with a little luck.

Story Tellers come in all sizes and shapes.  You know who they are.  They are the ones who speak with such conviction and assurance that you find yourself believing them.  They rattle off data and statistics assuming you will believe it supports their predictions and opinions.  They are really good at this; they seem almost naturally gifted to stand up and spew forecasts as if they know it will be fact.  Trust me, no one knows what the market will do tomorrow, next week, next month, next year, or anytime in the future.  No one would ever put their life on the line for their forecast.  Personally, I think all forecasts and predictions should have consequences.  Unlike aviation where being wrong might be the end of your career; how about baseball, where you get three strikes and you’re out.  Three incorrect guesses about the future and you hit the road - permanently.  Sadly, the financial media would grind to a halt.

So why do investors/traders like to hear from these folks?  Many just do not have the personal confidence to enter trades without some support from somewhere.  Often, trades are placed after reading a forecast that falls in line with their thinking about the market.  This makes it so much easier to make the trade.  Too often this process is continued until the account is closed or they return to being a hobbyist or just one who loves charts and technical analysis, but has a real day job.  Now, don’t get me wrong, if you realize this is your situation, then you are well ahead of the masses.  Congratulations!