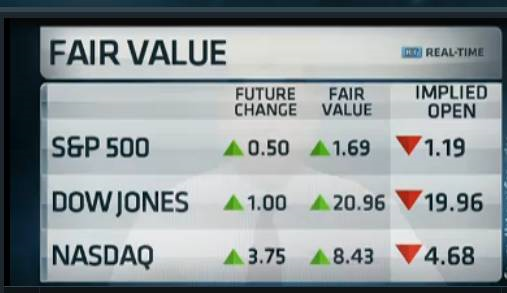 An intense but short-lived passion or admiration for someone or something.

I cannot begin to tell you how often I am asked about morning futures fair value to tell me if I’m going to invest that day based upon their proposed direction and/or level.  My response is always the same.  I don’t pay any attention to it because if there was any measurable effect, it is quickly dissipated in the first few minutes after the stock market opens. The infatuation with it stems from the onslaught by the financial media believing it is valuable information.  It just gives them something to fill the air with.  This article is to explain that the infatuation is misplaced because morning futures and implied open on an index are not actionable information.

The following is from my son, Grant Morris, CFA, who manages money for McElhenny Sheffield in Dallas, Texas.  He uses a rules-based trend following model that we created a few years ago.  It is very similar to the model I wrote about in my “Building a Rules-Based Trend Following Model” series this year in this blog.  Personally, I think we added some enhancements to my trend following approach which made the model even better.

During the pre-market hours, the financial media always quotes the morning Futures, the Fair Value, and the Implied Open level of the indices.  The Implied Open is equal to the Prior Day Close + (Futures Value – Fair Value). The first step in this calculation is determining Fair Value.

Arbitrage pricing theory holds that an investor should be indifferent between the choice of (1) buying the index (all of the individual stocks) and receiving the associated price changes and dividends over a specified time period, and (2) buying the Futures contract which will provide a cash settlement on the expiration date. If one choice was clearly better than the other, a risk-free profit could be gained and would be quickly arbitraged away.

Fair value is the theoretical assumption of where a futures contract should be priced given such things as the current index level, index dividends, days to expiration and interest rates. The actual futures price will not necessarily trade at the theoretical price, as short-term supply and demand will cause price to fluctuate around fair value. Price discrepancies above or below fair value should cause arbitrageurs to return the market closer to its fair value.

The following formula is used to calculate fair value for stock index futures:

The Implied Open can then be calculated based on the morning Futures price. The Futures contract was trading at 2731.25 just prior to the market opening on Monday November 19th.

The market actually opened at 2730.74, down from the previous day’s close, but not by quite as much as was estimated by the Implied Open.  See Chart A.

Implied open is really just a reference point. Surges of activity around the open generally render this price not useful to traders.  One of the cable business stations has a British guy who raves at calling the opening of the Dow Industrials and will read off every quote for the first few seconds.  He rarely mentions the S&P 500, Nasdaq, or Russell 2000.  Prior to the market he will look at the fair value calculated on morning futures and for example if it says +45.50; he will blatantly state that the Dow Industrials will open 45.5 points higher.  Watch this sometimes and you see it rarely does.  Many times, it is completely in the wrong direction.  And the other financial stations do the same thing, but in their own quirky perceived value way.  In the example above from Grant, the implied open and actual were reasonably close.  However, did that information assist you in anyway?

Keep in mind that morning futures are traded by many different types of traders.  The small-time traders have no effect on the price; it is the institutional traders (which are also people) and often algorithmic trading that makes the market move.  I’ve watched all this on my treadmill in the early morning and am convinced that all it does is get you excited, especially if you are aligned with what they are predicting; an excitement that is more than often vanquished about 5 minutes after the market opens.  And notice that once the market opens, the media doesn’t discuss the morning futures or implied open value for the rest of the day; because they know it doesn’t matter. If you read my series of articles on “Building a Rules-Based Trend Following Model,” you know that I never make a trade in the first 45 minutes after the open.  Why?  Entirely too much volatility and indecision.  Think about it.  Turn off the television!