The DecisionPoint Weekly Wrap presents an end-of-week assessment of the trend and condition of the stock market (S&P 500), the U.S. Dollar, Gold, Crude Oil, and Bonds. We have a happy coincidence with Friday also being the end of the month, so we can wrap the week and the month in this commentary. 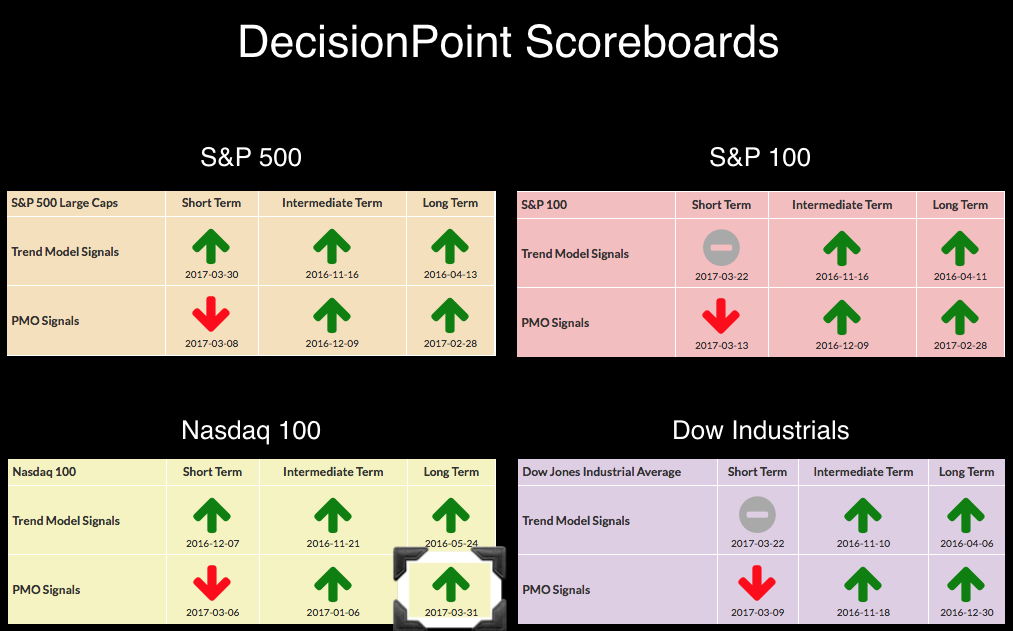 A new long-term BUY signal was generated this month when the monthly PMO crossed up through its signal line. 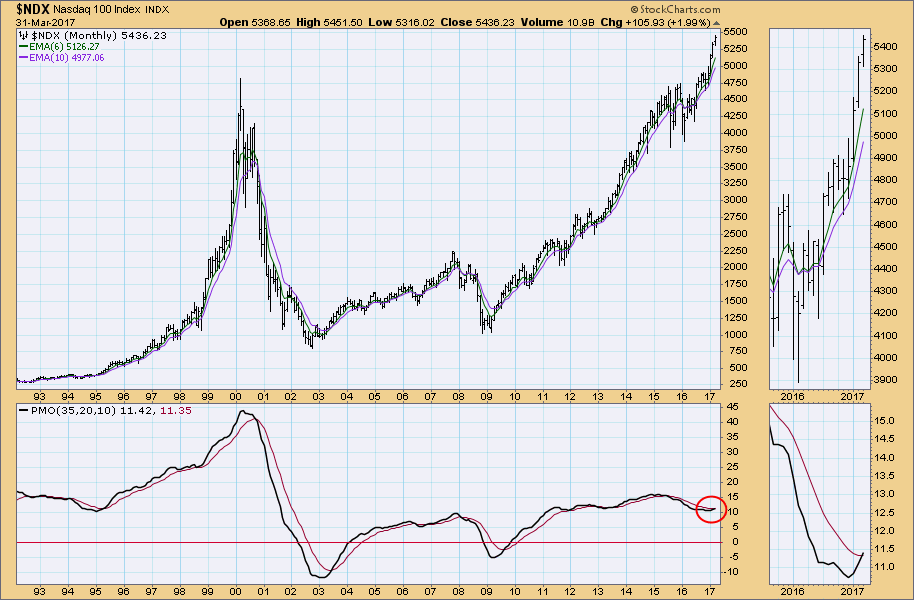 SPY broke down on Monday, but bounced back up. The PMO is still falling, so the short term remains negative. 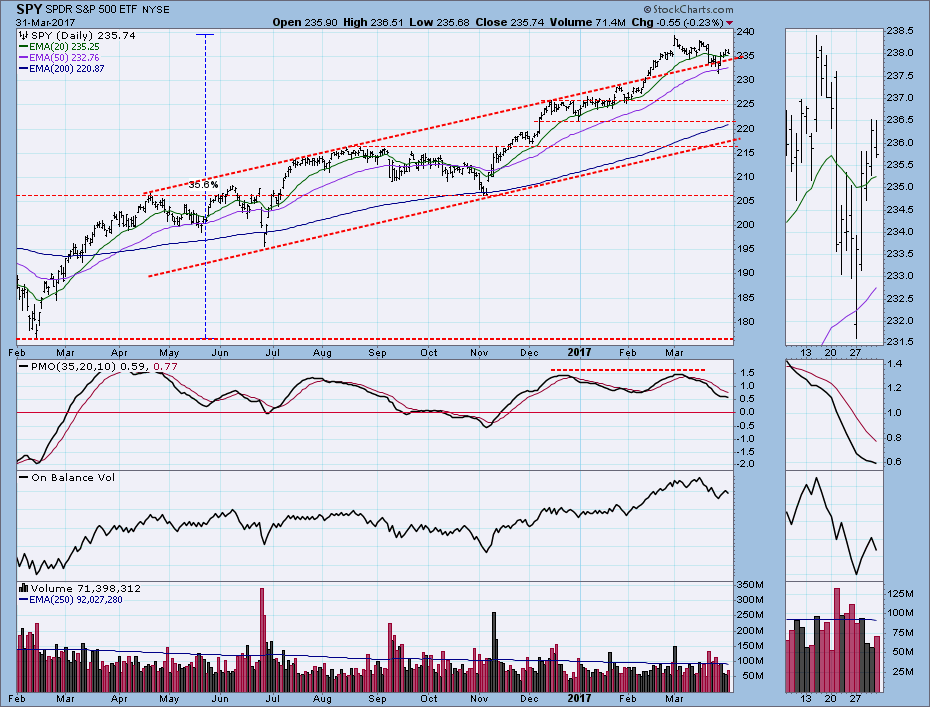 The weekly PMO is falling, and the rising trend line drawn from the 2016 low still looks like a reasonable downside target. 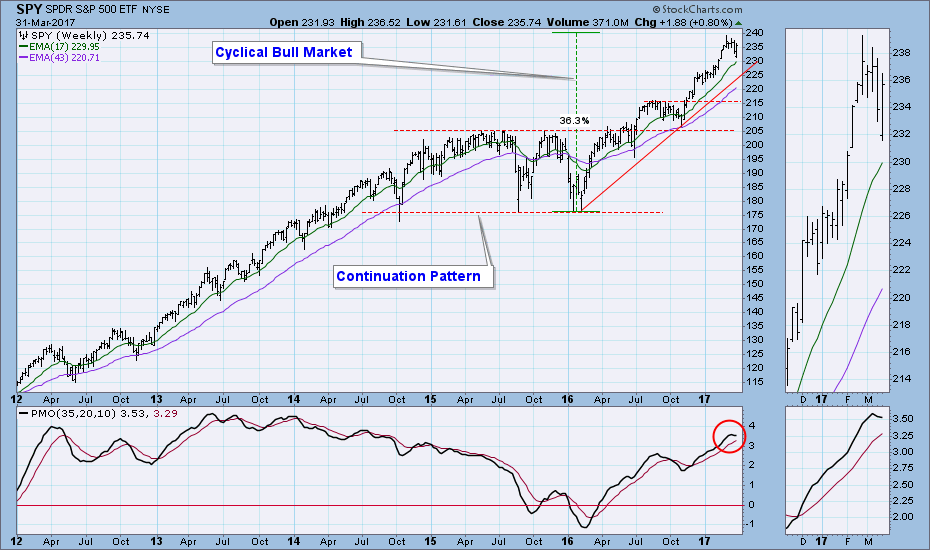 SPY is generally positive in the monthly time frame, but the most recent rising trend line looks too steep to be maintained and calls for a consolidation or correction. 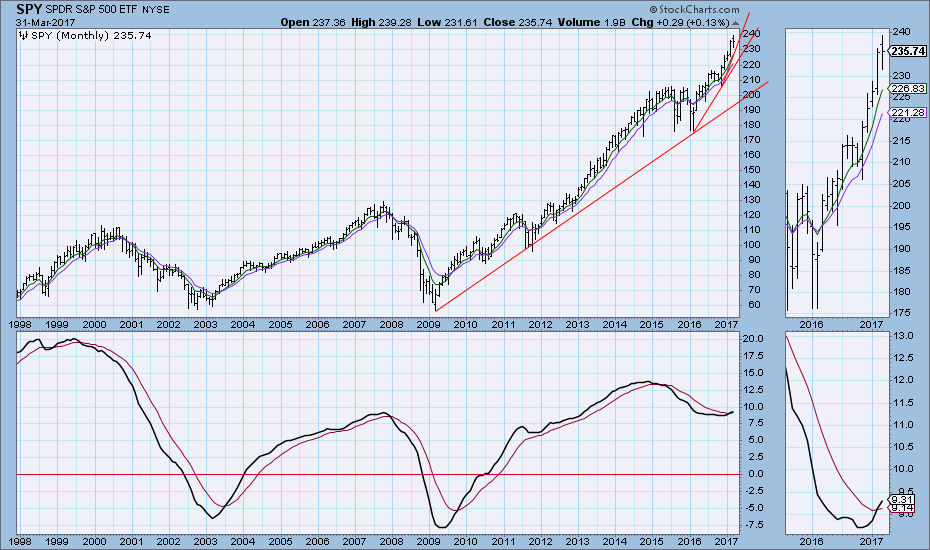 Short-Term Indicators:  These indicators have visibly decelerated, and we should look for them to top next week. 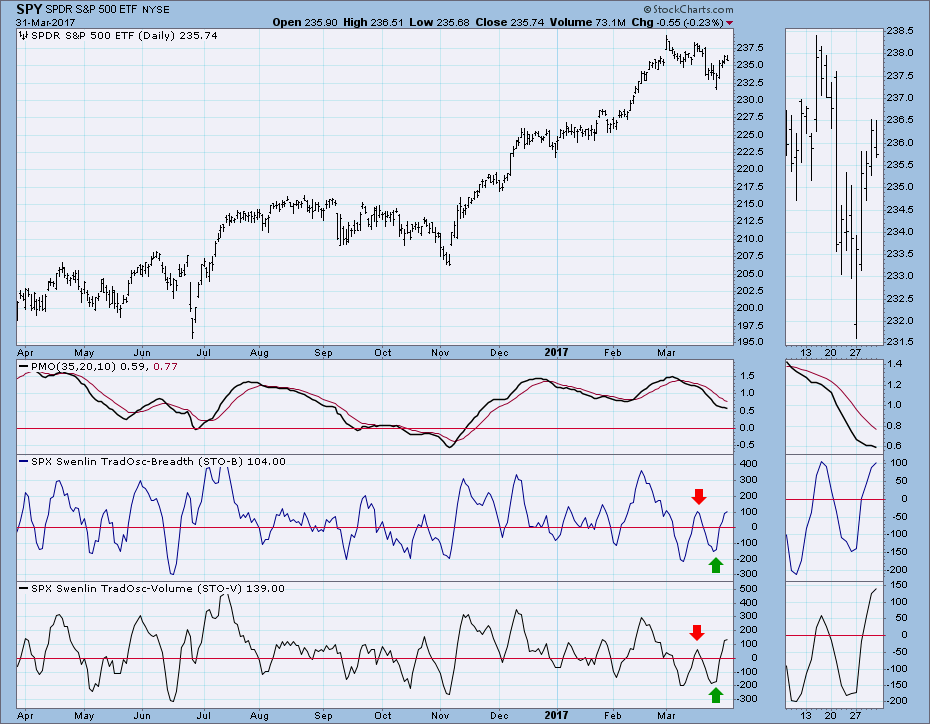 Intermediate-Term Indicators:  While two of the three indicators are rising, they look as if they are preparing to turn down again. 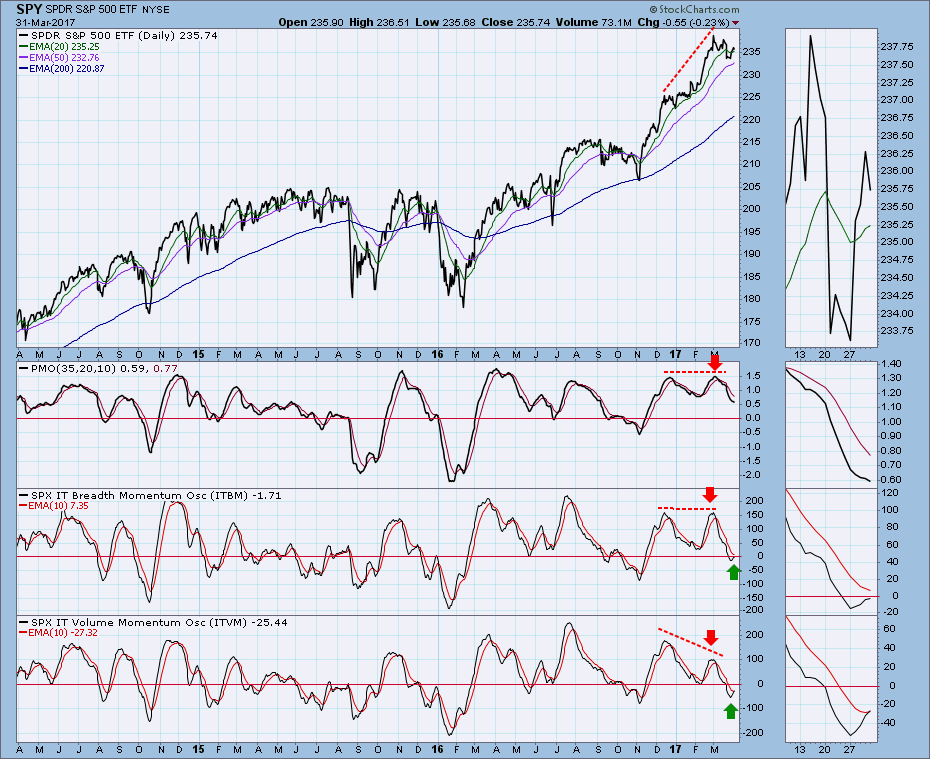 Conclusion:  The bull market remains intact, and the market doesn't seem to tolerate too much correction before it rebounds, such as what happened this week. There are reasons to be optimistic, but I think we'll need to see more churning or downside before the next up leg starts. The IT Trend Model BUY signal is very healthy and can absorb some punishment without the 20EMA dropping below the 50EMA (which would cause the BUY signal to change to NEUTRAL).

This week UUP dropped below the February low and officially established a down trend. The very next day it began moving higher again, making a third bottom, across which we can draw the bottom of a declining wedge formation. The declining wedge will most likely resolve to the upside, particularly with the dollar being in a bull market. 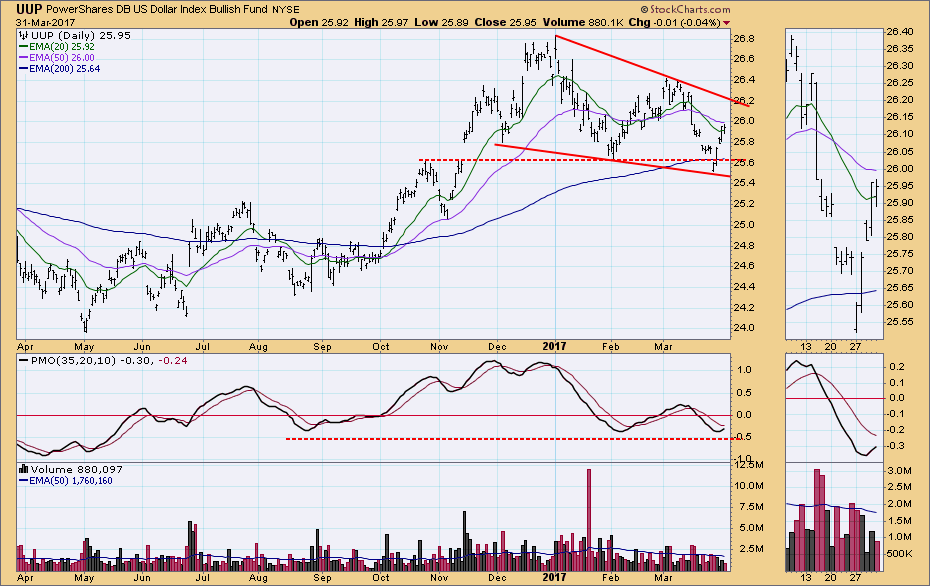 This time frame is negative. There is a negative divergence across weekly PMO tops, and the PMO is declining below its signal line. There is also a possible double top. 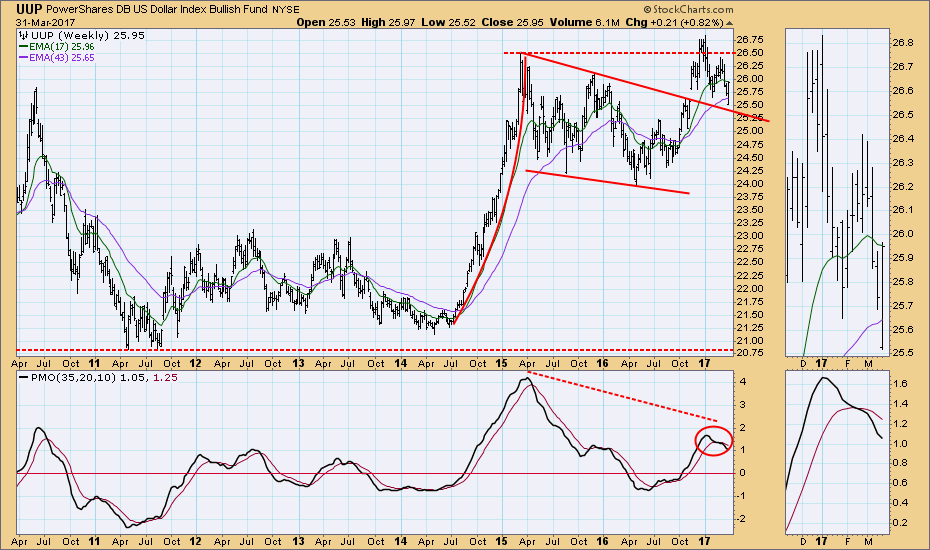 The monthly chart looks positive, but the PMO is too flat. 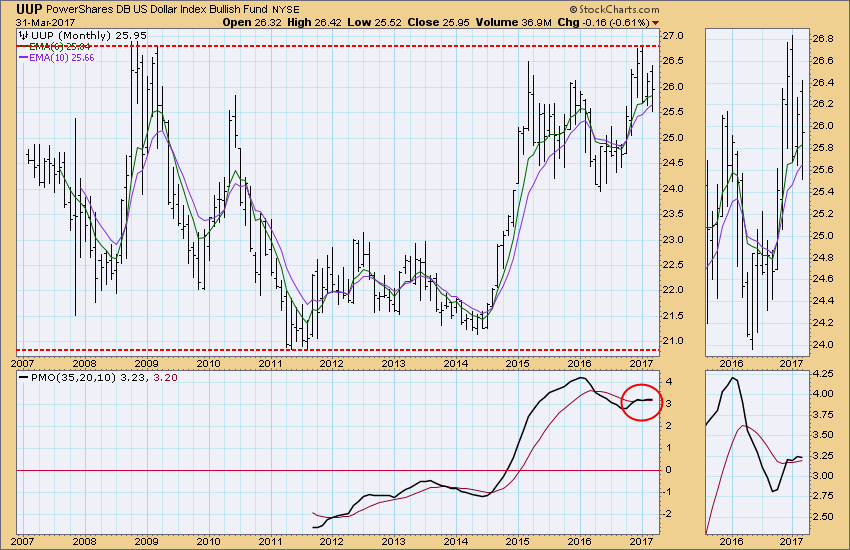 Gold nearly reached the level of the February top, but it turned down on Friday, hinting at a possible double top. Sentiment turned negative even before price began to top, showing that the positive sentiment of the prior two weeks was not deeply ingrained. 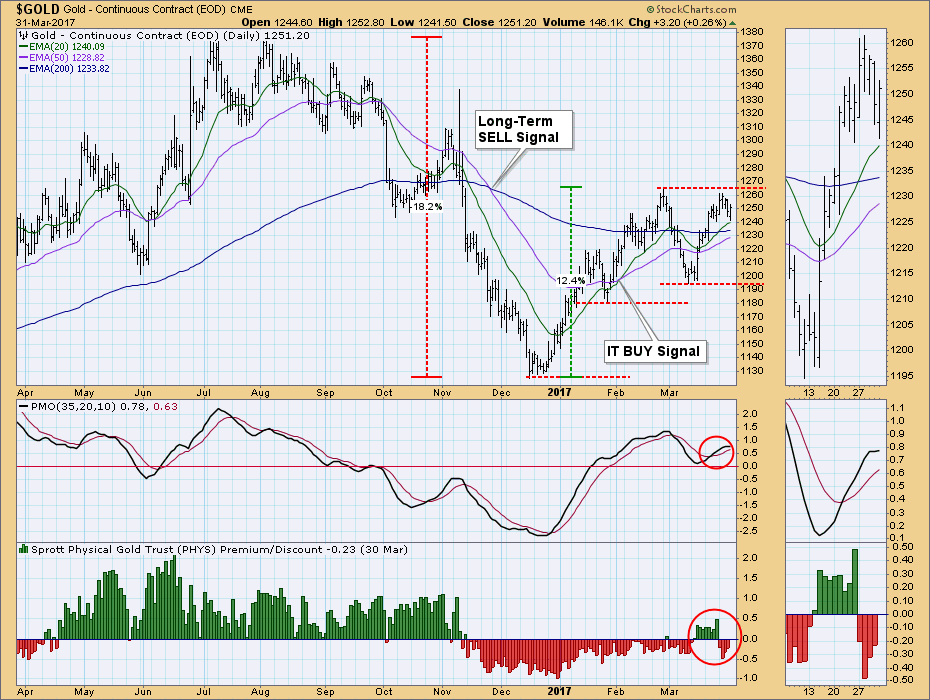 The weekly chart has a neutral triangle formation, but the PMO is rising above its signal line. Gold is basically positive in this time frame. 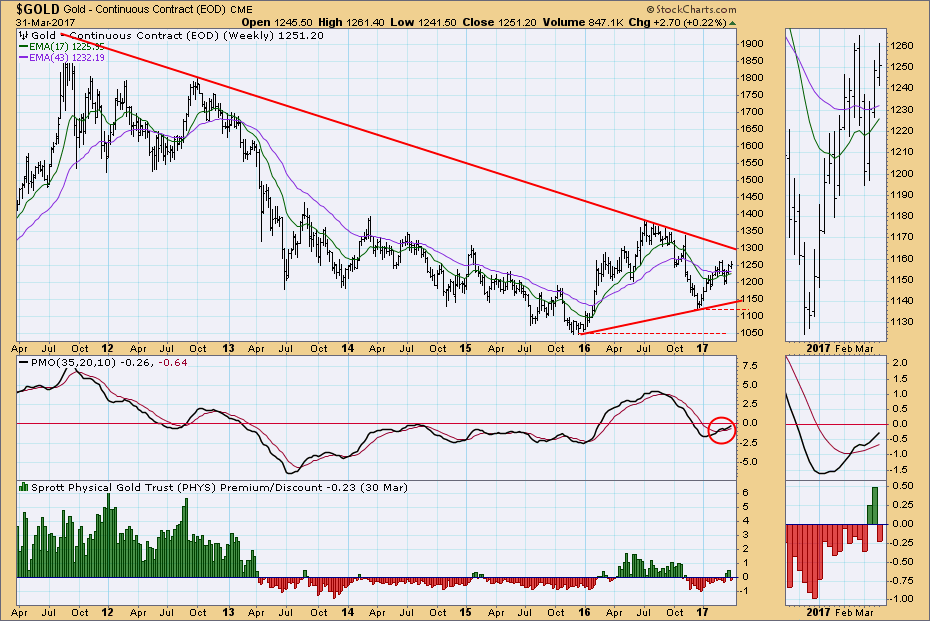 The monthly PMO is rising and above its signal line, making gold slightly positive in this time frame. 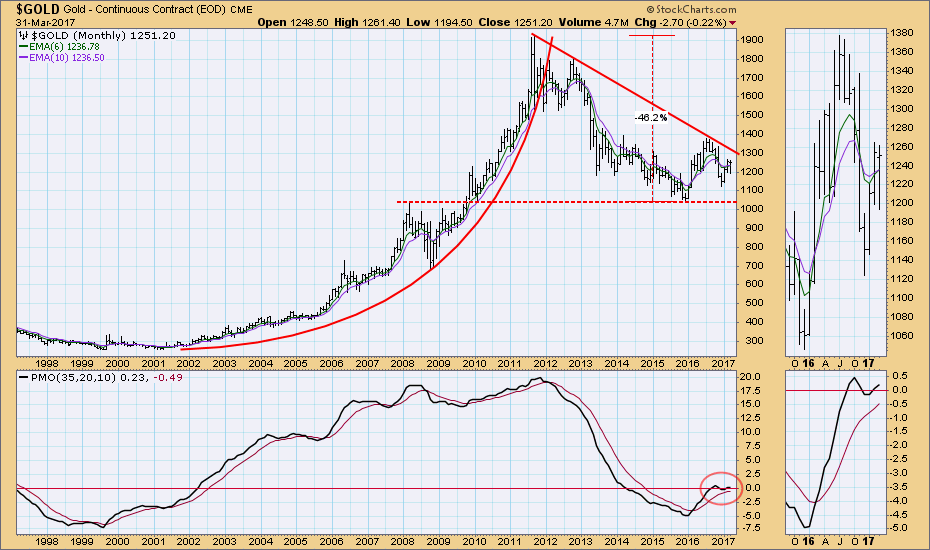 On the daily chart crude oil remains within a narrowing trading range, and a new PMO BUY signal indicates that the current rally from this month's low will most likely continue to the top of the range. The weekly chart shows the basing pattern, now about one year old. 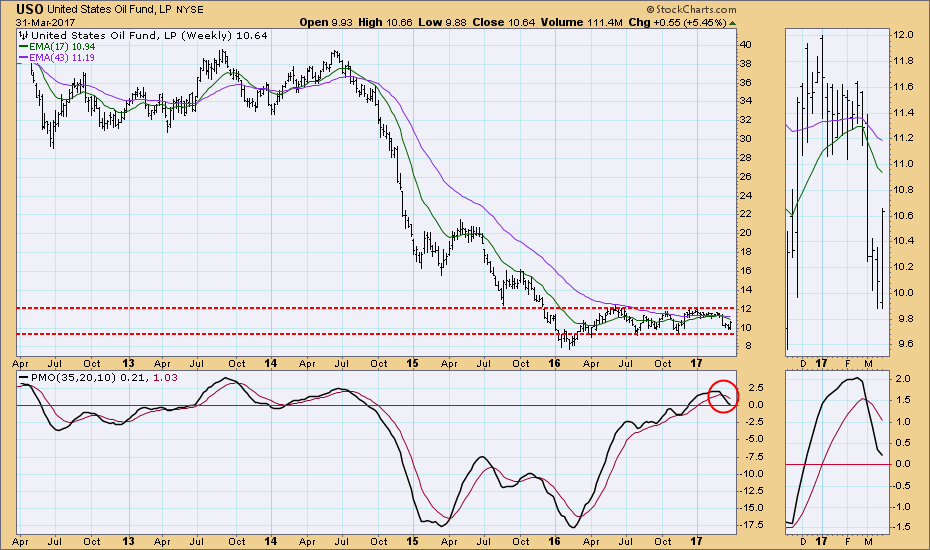 The monthly PMO is rising, but it is a function of the flat prices for the last year. If sideways price movement continues, the PMO will migrate all the way back to the zero line. 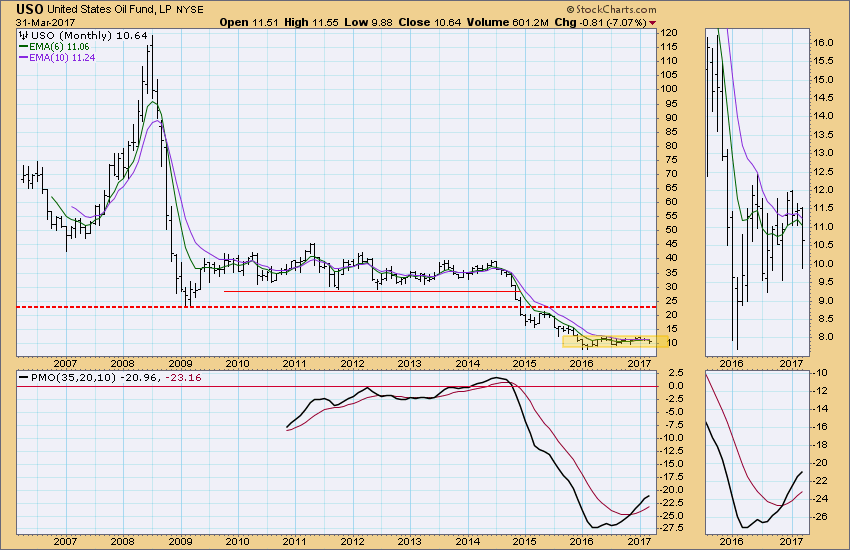 The new IT Trend Model BUY signal today is the result of sideways price movement. It could be signalling higher prices, but TLT has topped within its trading range, so I'm not optimistic. 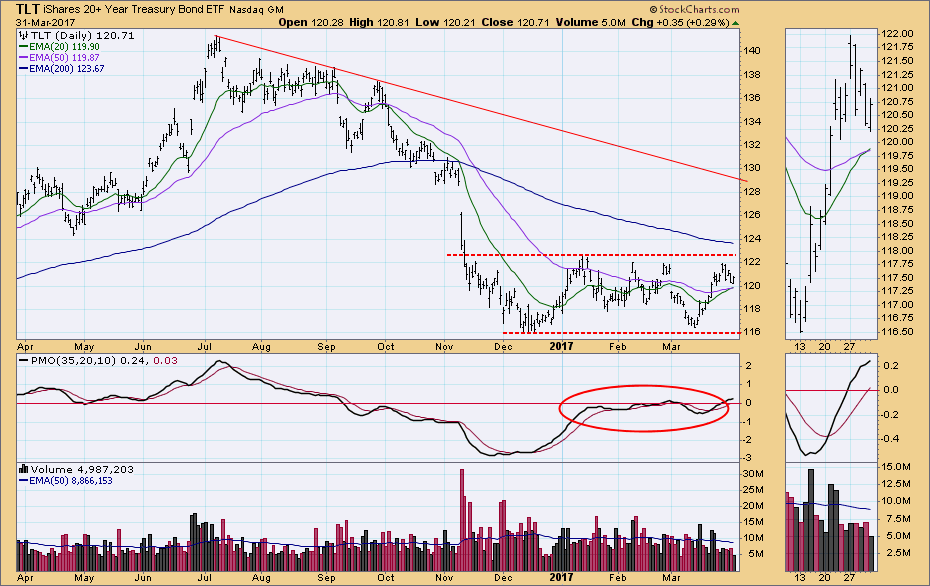 The weekly chart shows a new PMO BUY signal, but there is a PMO negative divergence as well. 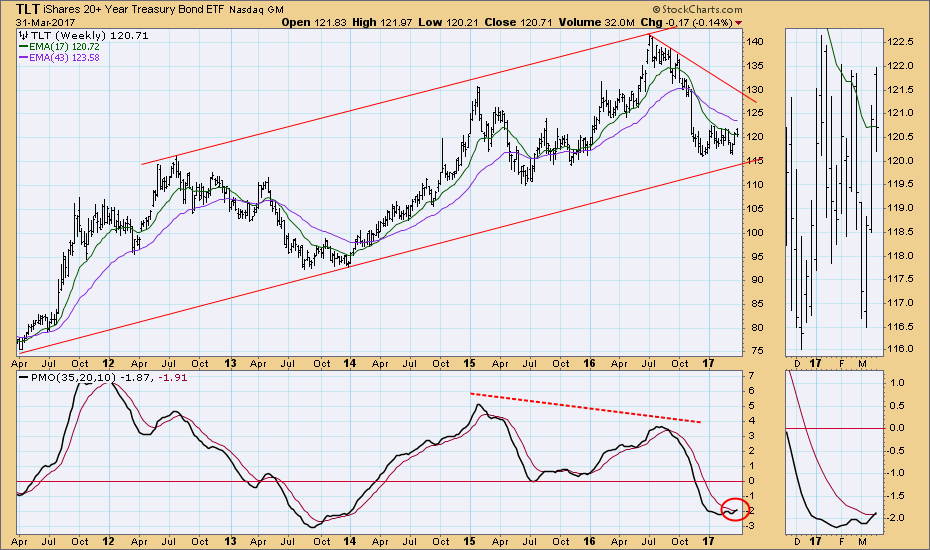 I decided to post a monthly chart of $USB because it has a much longer data set than TLT. Note the steady price rise over more than 30 years within fairly regular trend channel. At the end we can see price break out of the channel in what is probably a final blowoff. 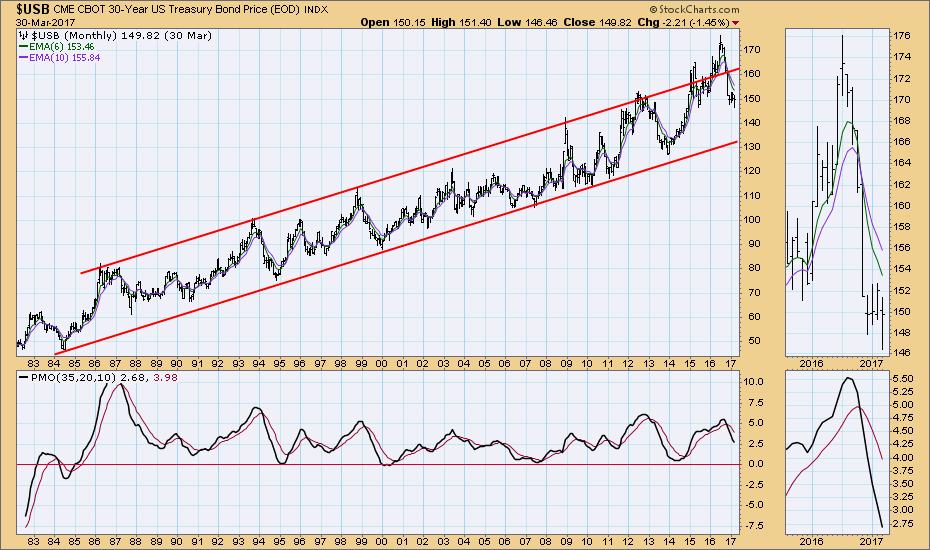