I thought that last week's breakout was the initiation of a new rally that would continue this week. But no. This week price moved back below the breakout level, but strangely this failure did not develop into a more serious breakdown either. Price just continued to churn sideways, which resulted in the PMO (Price Momentum Oscillator) turning down -- a very short-term SELL signal. 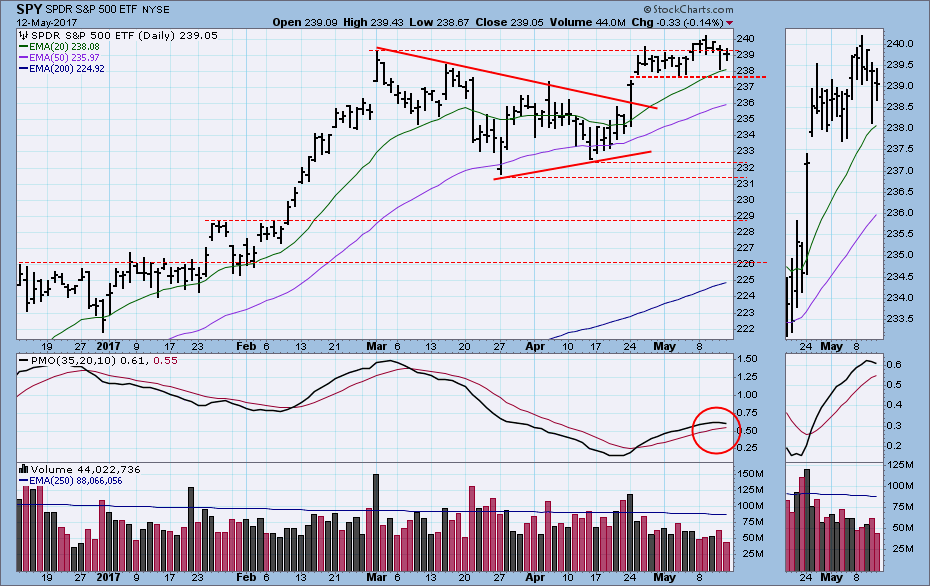 Price broke out through the top of a triangle formation in late April, but it has made virtually no progress since reaching the high set in March. There are negative divergences on OBV and on the PMO, which just topped. 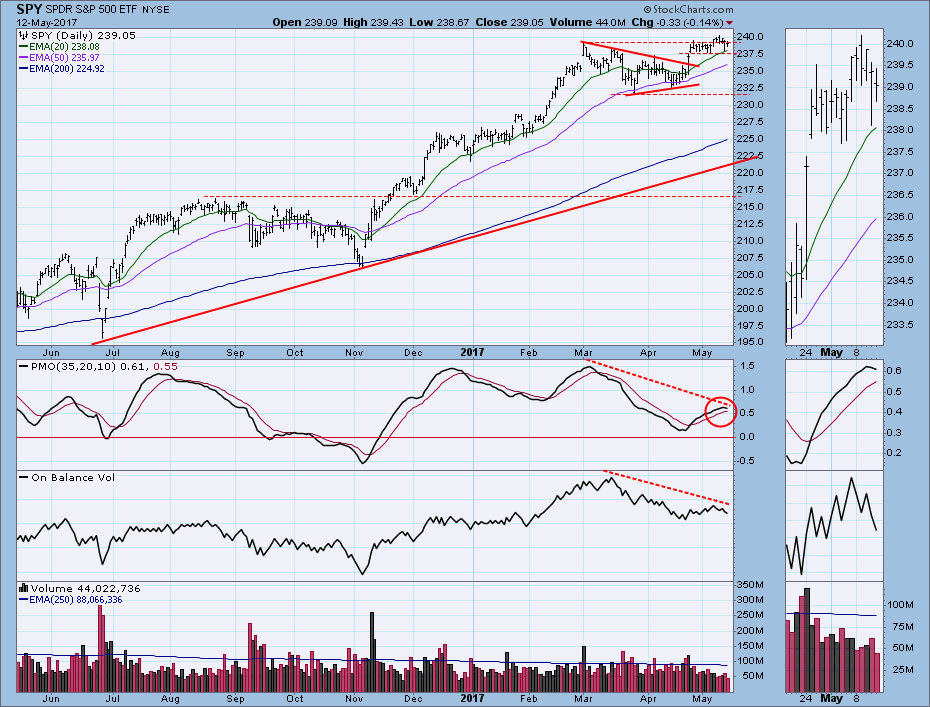 The weekly PMO is very close to topping below the signal line, which is a very negative configuration. 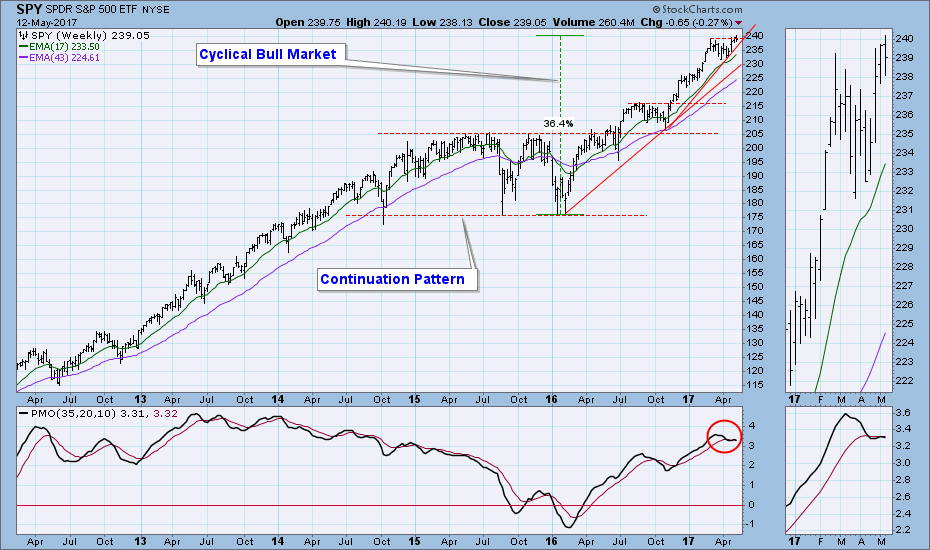 Short-Term Market Indicators: There are negative divergences across the two most recent short-term tops. 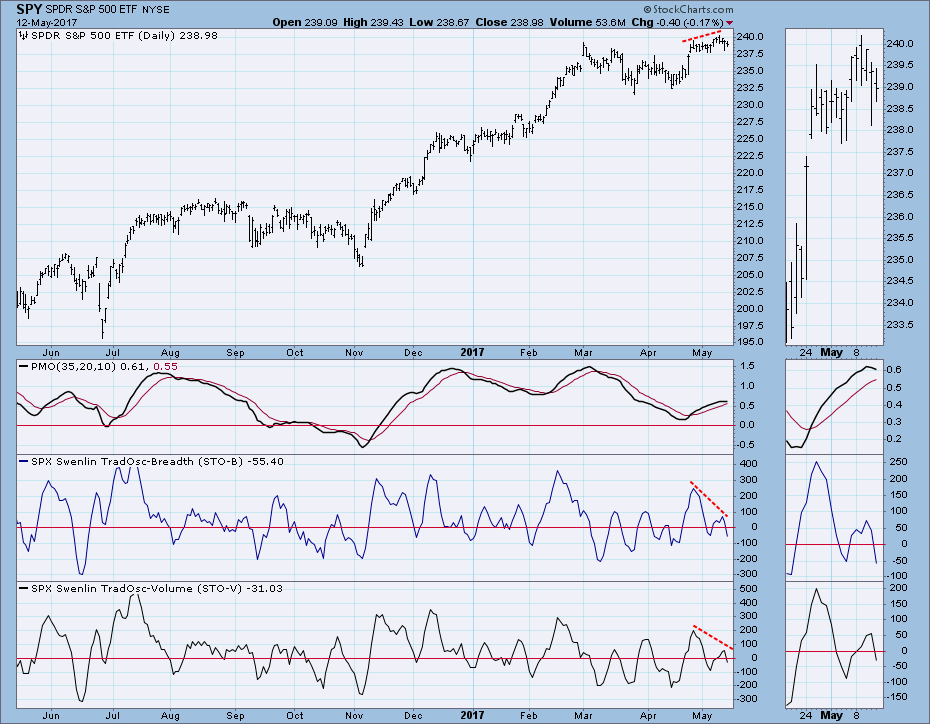 Intermediate-Term Market Indicators: More negative divergences, and the ITVM has topped very close to the zero line, emphasizing how weak volume has been. 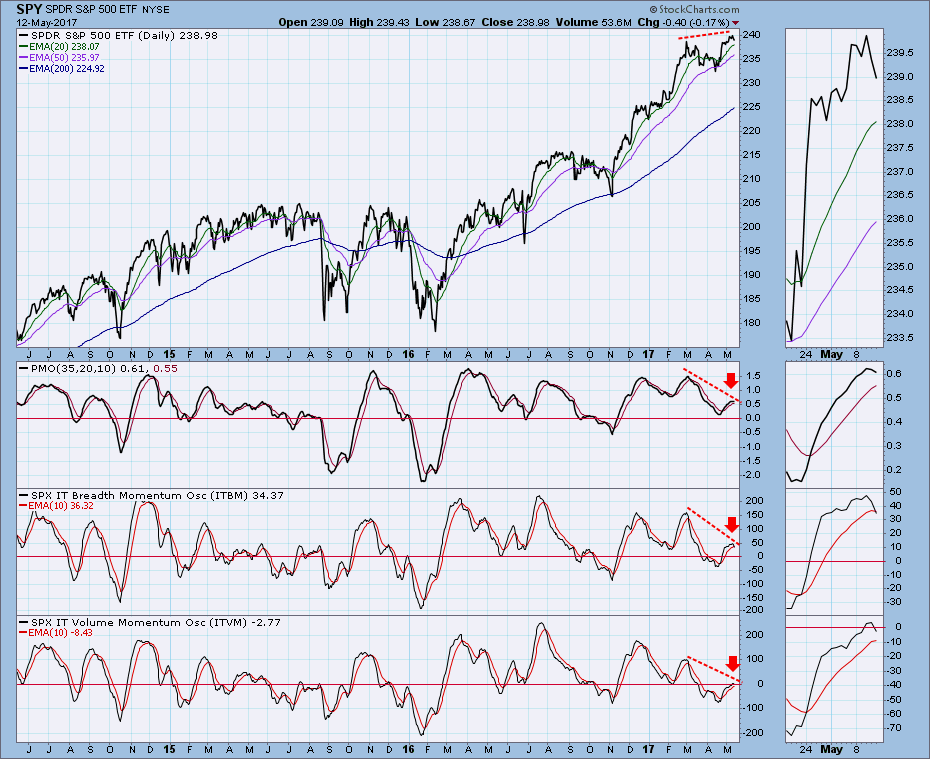 PMO Analysis:  I don't usually include this chart, but I think it gives an important view of weakening internals. It shows the percentage of S&P 500 stocks whose PMOs are: (1) above zero, (2) above their signal lines (PMO crossover BUY signals), and (3) rising. The percentages are unusually low, considering that SPY is near all-time highs. 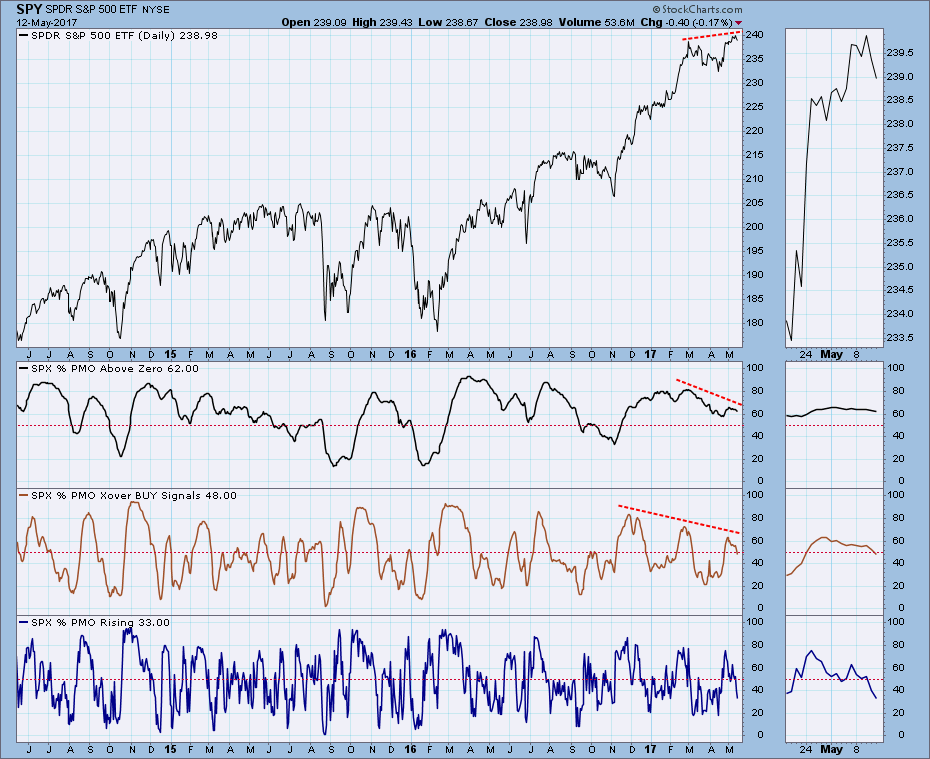 Conclusion:  My optimism from last week has been considerably dampened by the market's failure to continue to rally after breaking out and making new, all-time highs. Indicators, which last week offered encouragement by being bull market oversold and rising, have now topped and have formed negative divergences against price. How can the outlook change so quickly? Well, we are positive when indicators begin moving up from relatively oversold levels -- they have plenty of room to accommodate higher prices before they start to become overbought. But the price advance has not materialized (yet?), and the indicators have now topped at levels that are still oversold by bull market standards. We don't want indicators topping while they are still oversold. It is dangerous. Because of this, I am am feeling very cautious about next week.

Last week I thought there was a good chance that price would drop down through the bottom of the falling wedge formation, but a sharp bounce on Monday and Tuesday saved the day. Unfortunately, price broke down again on Friday, and we may see support challenged again next week. 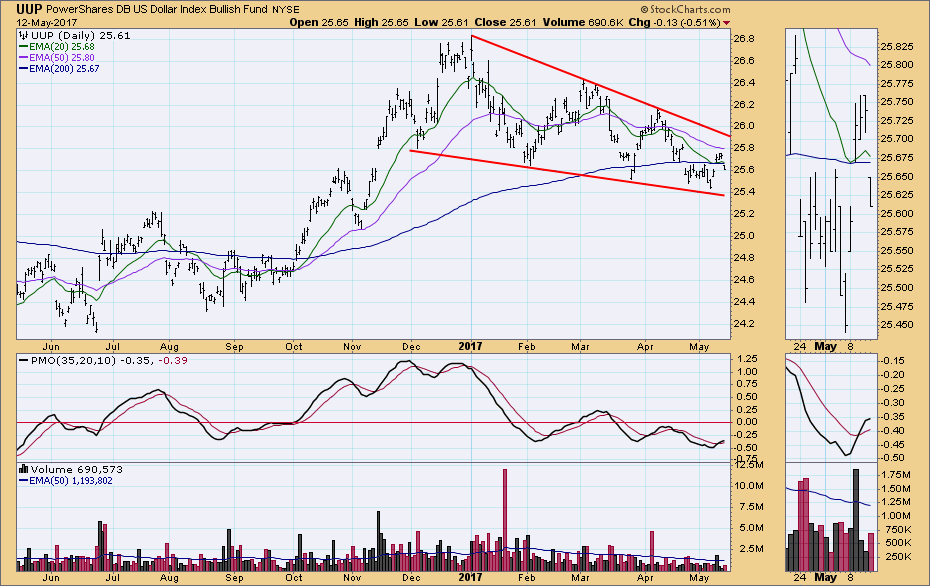 The bullish pennant formation still holds, but the weekly PMO is falling. There is a PMO negative divergence. 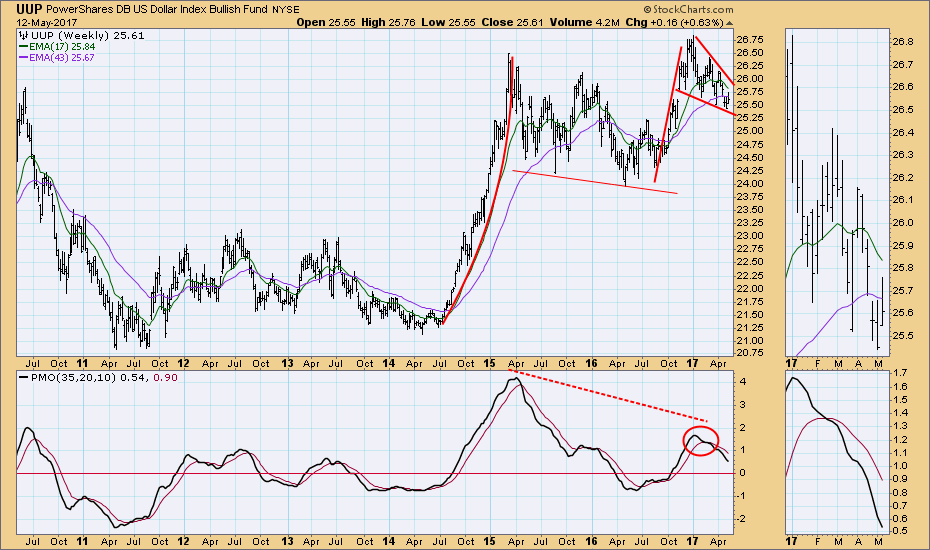 On Thursday gold generated an IT Trend Model NEUTRAL signal, as the 20EMA crossed down through the 50EMA. Note that a SELL signal isn't generated unless the 50EMA is below the 200EMA at the time of the 20/50EMA crossover. 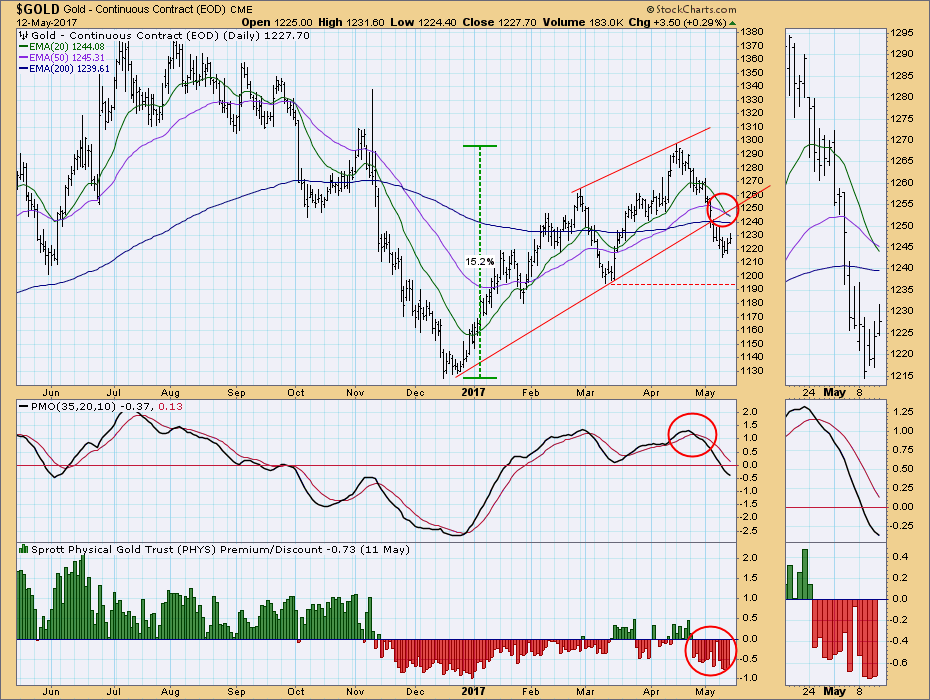 The weekly chart shows that price is in the middle of a triangle formation, and the bottom of the triangle is a reasonable downside target. 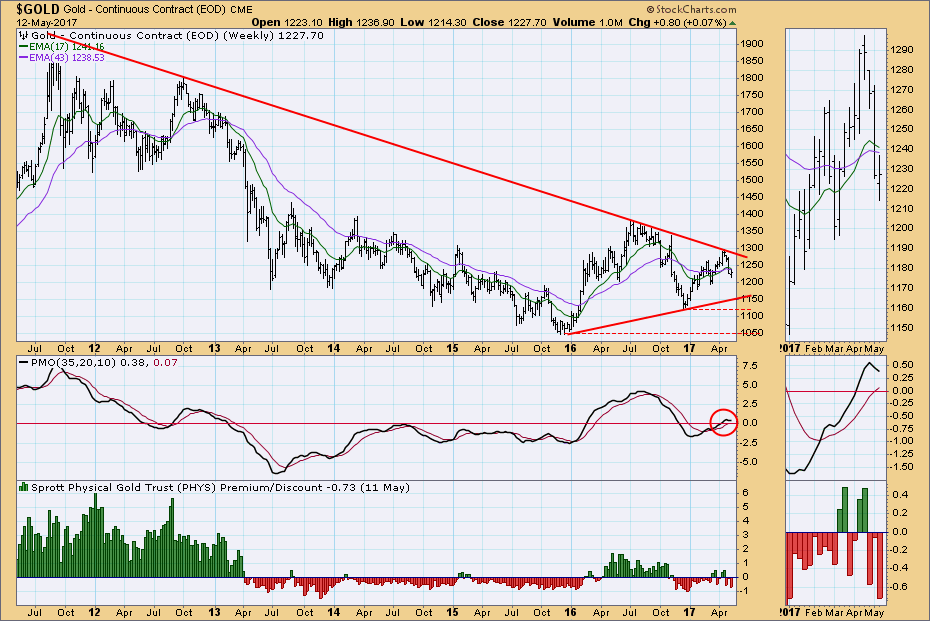 The annotations on the USO daily chart are possibly more complex than they need to be. Since the price bottom has also resulted in a PMO bottom, chances are that price is headed back up to the top of the trading range. 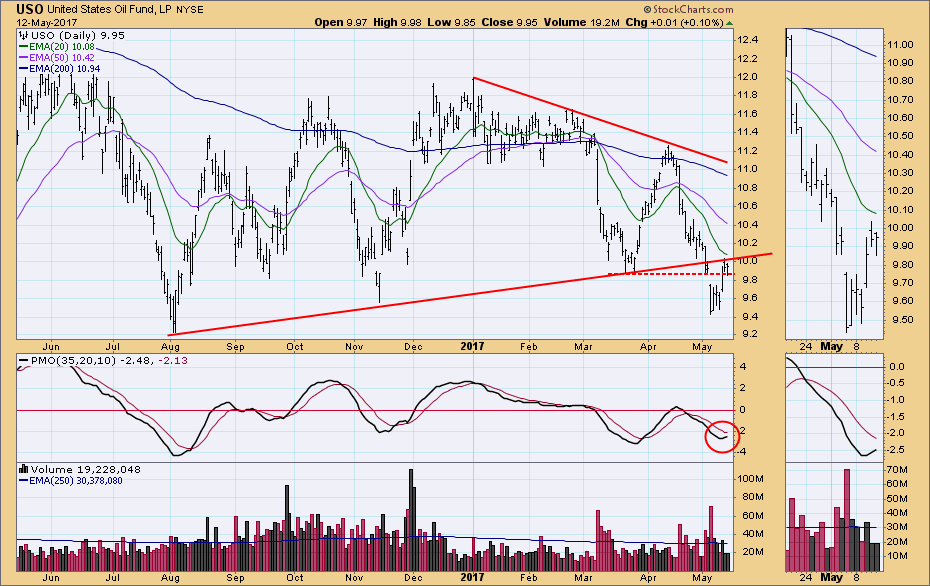 The trading range issue is more apparent on the weekly chart. 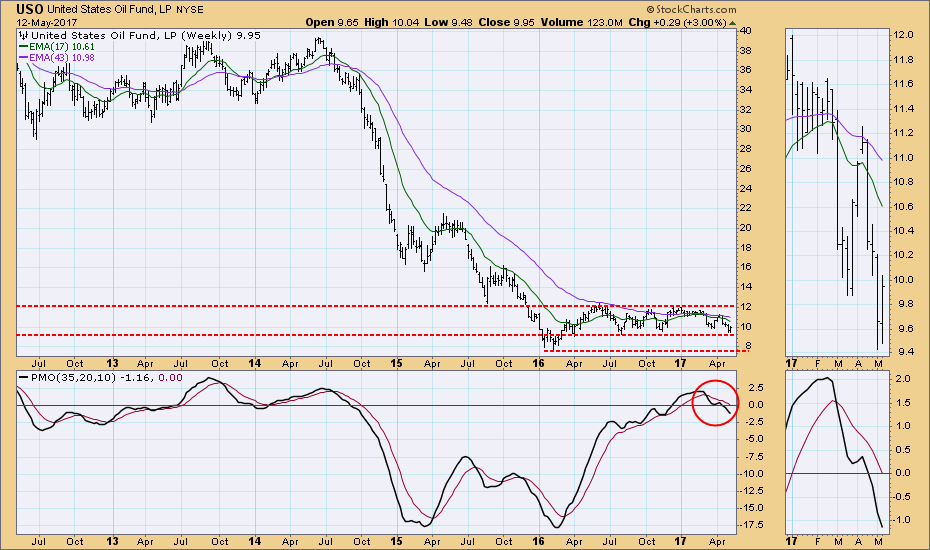 After a week of correcting, price bounced up nicely on Friday. The daily PMO will bottom next week if price continues higher. 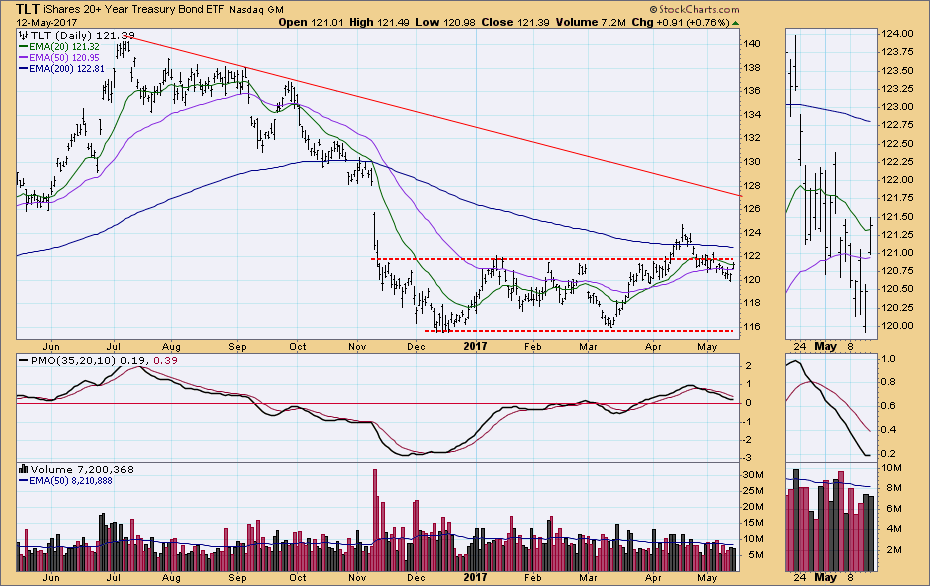 The weekly PMO is still rising, and price closed near the high for the week. 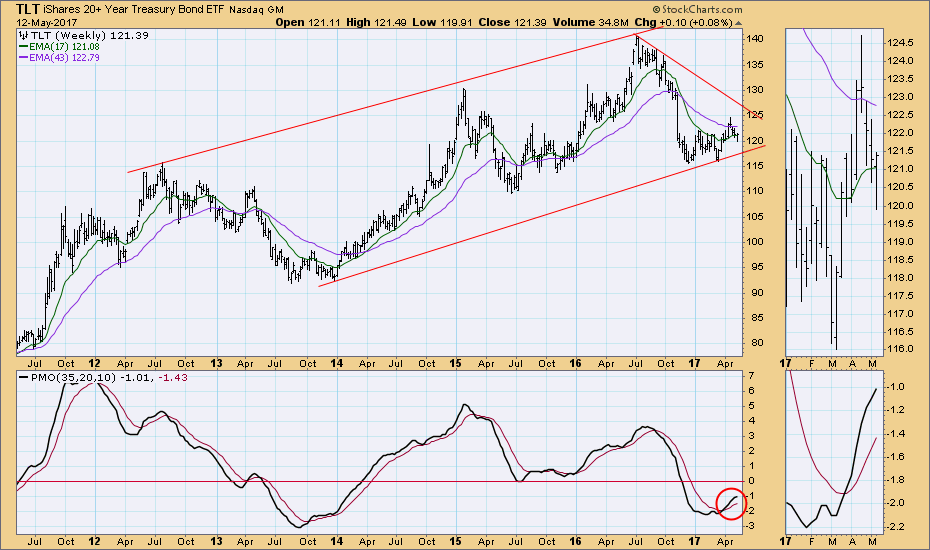