It's clear looking at the NDX Scoreboard that technology has been taking it on the chin. Today, tech titans like Micron (MU), Apple (AAPL) and Advanced Micro Devices (AMD) had a great day and consequently pushed the NDX upward. It wasn't enough to clear the ST Trend Model Neutral signal nor the PMO SELL signal. A look at the chart shows us that the ST Trend Model signal isn't likely to hang on if the tech rally continues as the 5-EMA is leaping skyward toward the 20-EMA. The PMO SELL signal, on the other hand, looks fairly intact with enough margin between it and its signal line to keep the SELL signal in place at least another week or so. It is quite encouraging to see price recapture support above 5900 and rising bottoms trendline support. 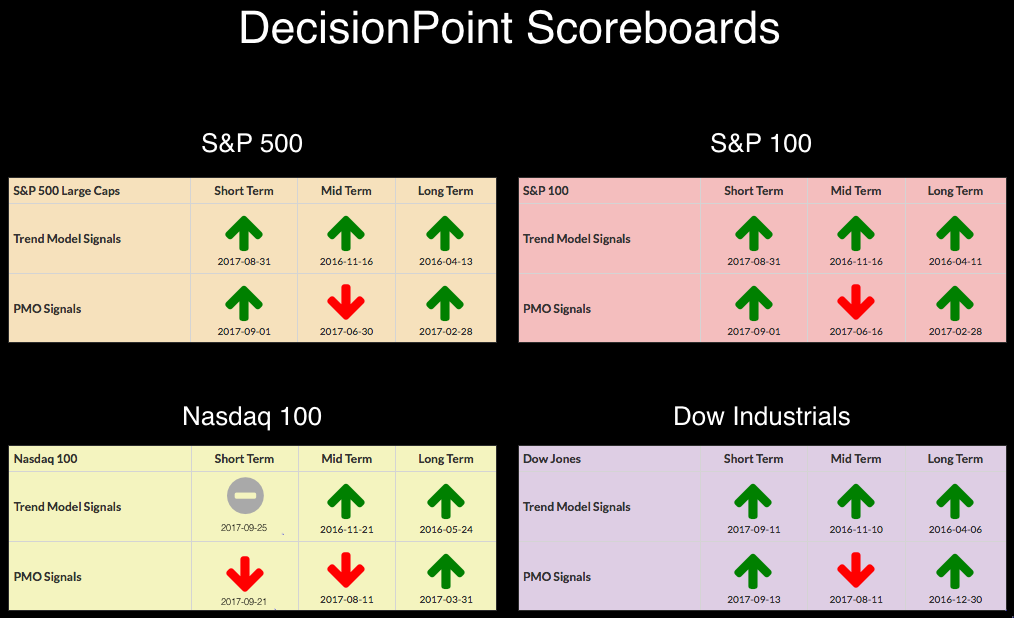 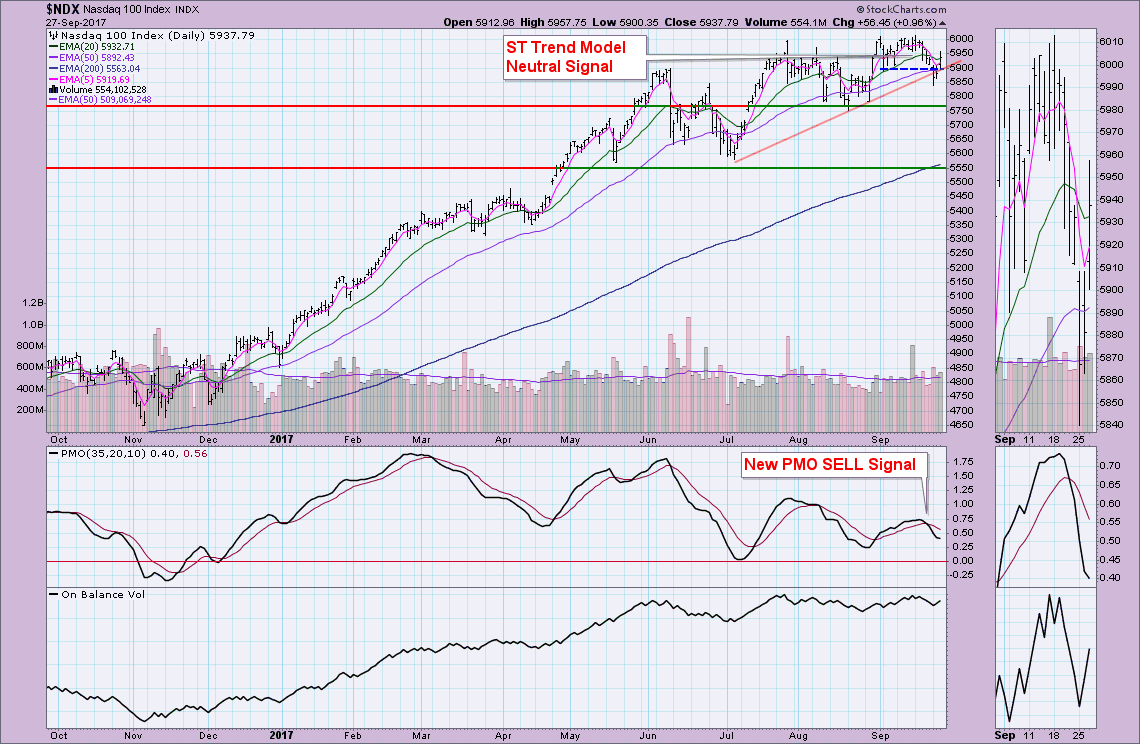 It was a rollercoaster day for the markets with the SPY gapping up on the open, retreating to negative territory, followed by a breakout to new intraday highs. My title is in reference to the SPY missing a new all-time high by only $0.01!

The question now is whether the pullback/consolidation of the past week is over. I don't think so. I believe we still have some more sideways movement left before logging a new all-time closing high. Of course, the SPY missed that all-time closing high by a razor thin margin, so I could be wrong very quickly! In any case, I'm not looking for a resumption of the rally just yet, although the PMO turning back up is very compelling. It's the indicators... 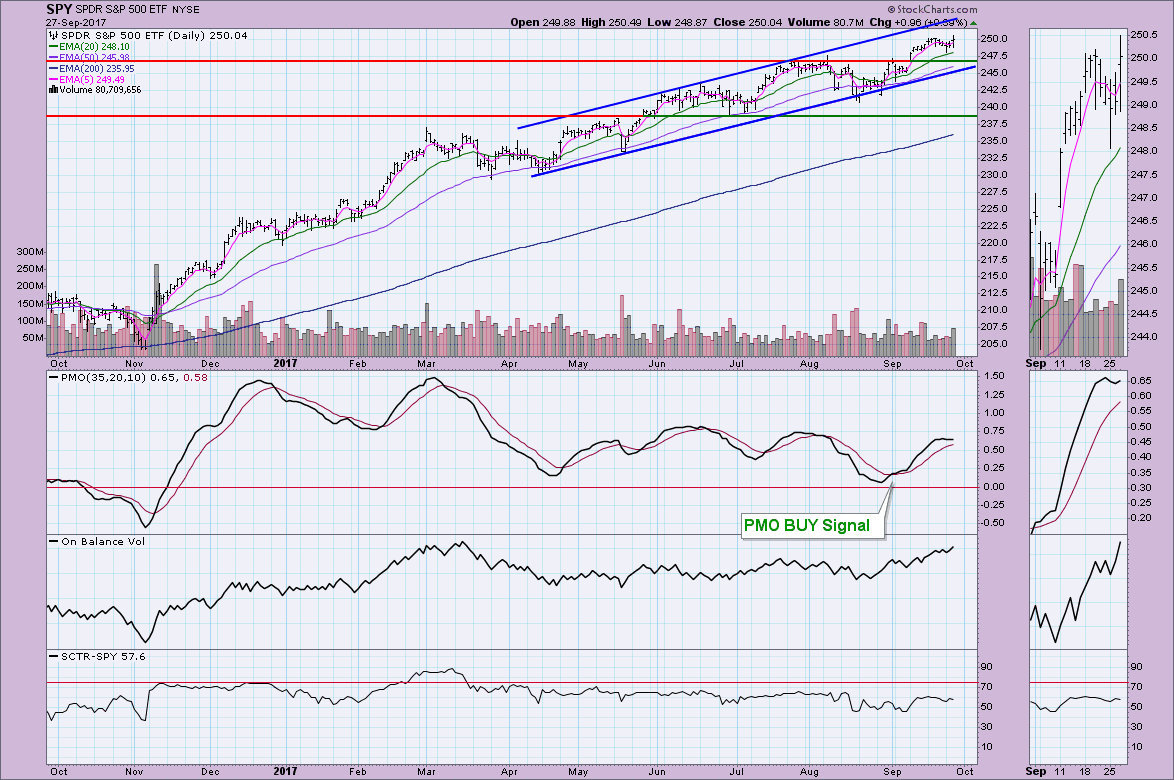 Ultra-Short-Term Indicators: We did see somewhat elevated breadth numbers that could suggest a buying exhaustion that would call for a decline over the next day or two. The VIX is not that helpful as the Bollinger Bands have shrunk. I think it is important to note that readings are staying above the average (remember, inverted chart) which suggests complacency or bullish sentiment. Sentiment being contrarian, that is somewhat bearish for the market. 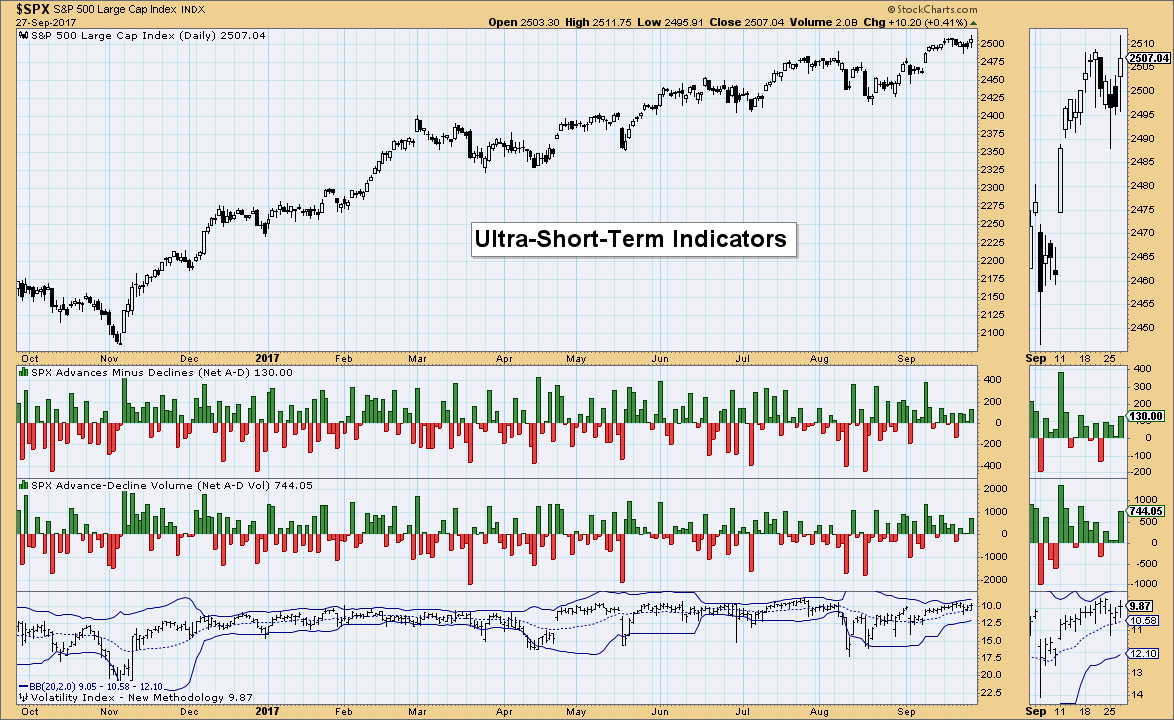 Short-Term Indicators: These indicators have been unwinding nicely. They appear to be turning back up for another crack at overbought territory. However, I think this could be another head fake like we saw in early August. I'm holding off getting too bullish short term. 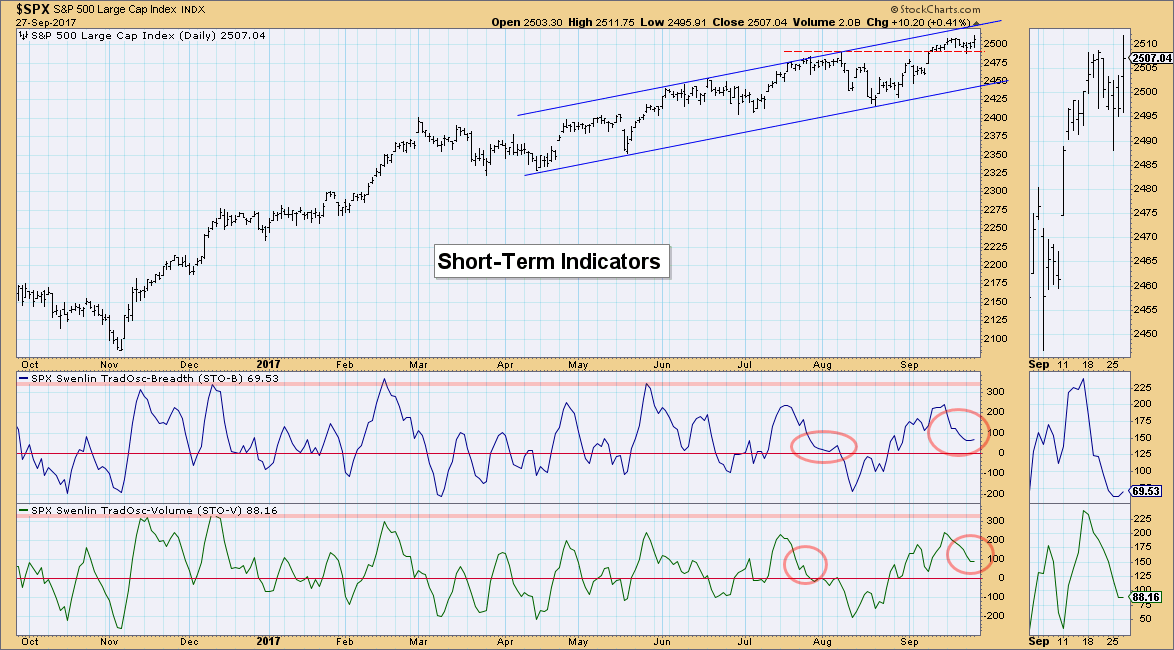 Intermediate-Term Indicators: I've remained bullish for the intermediate term and I stay there when I look at this chart. The indicators slowed their ascent, but they continue higher. While they are in near-term overbought territory, we can see that readings around 200 are not out of the realm of possibility. 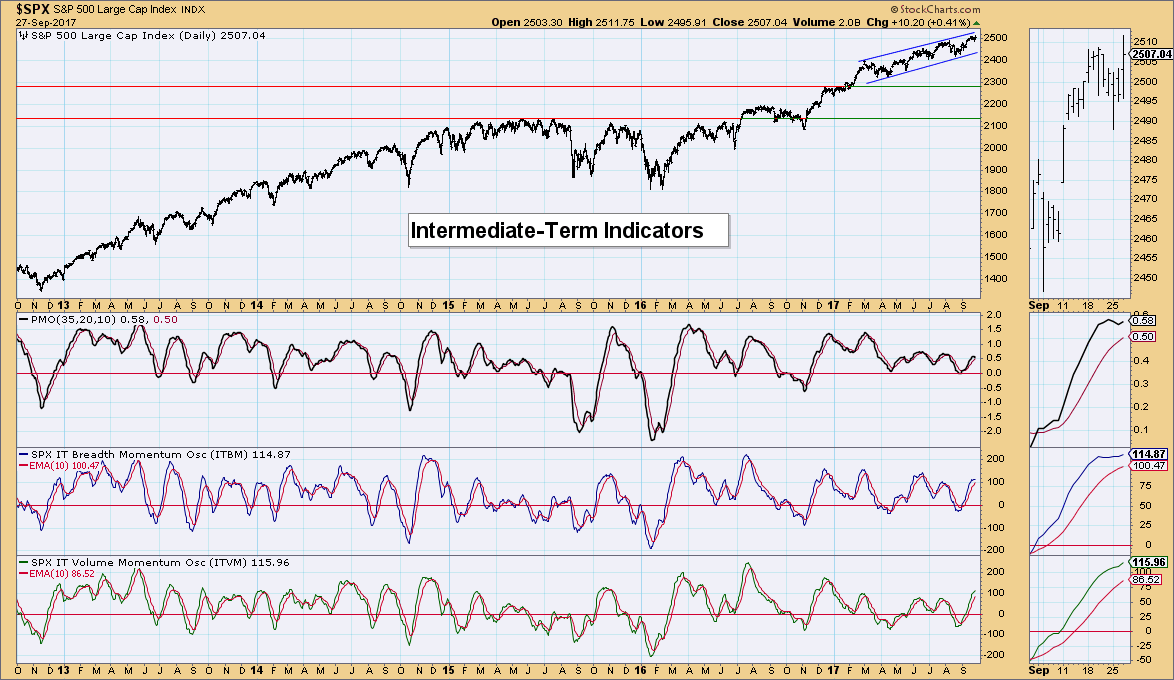 Conclusion: The market still seems toppy to me. I suspect there will be more sideways movement based on short-term indicators, but the rally should resume after the market pauses based on the intermediate-term indicators.

We're finally seeing some real rally out of the Dollar. A new ST Trend Model BUY signal executed Monday when the 5-EMA crossed above the 20-EMA. The PMO has finally broken its bonds and has traveled above the previous August tops. It is now challenging the PMO top from June, setting up a beautiful positive divergence! I think I can finally say that I am bullish on the Dollar. 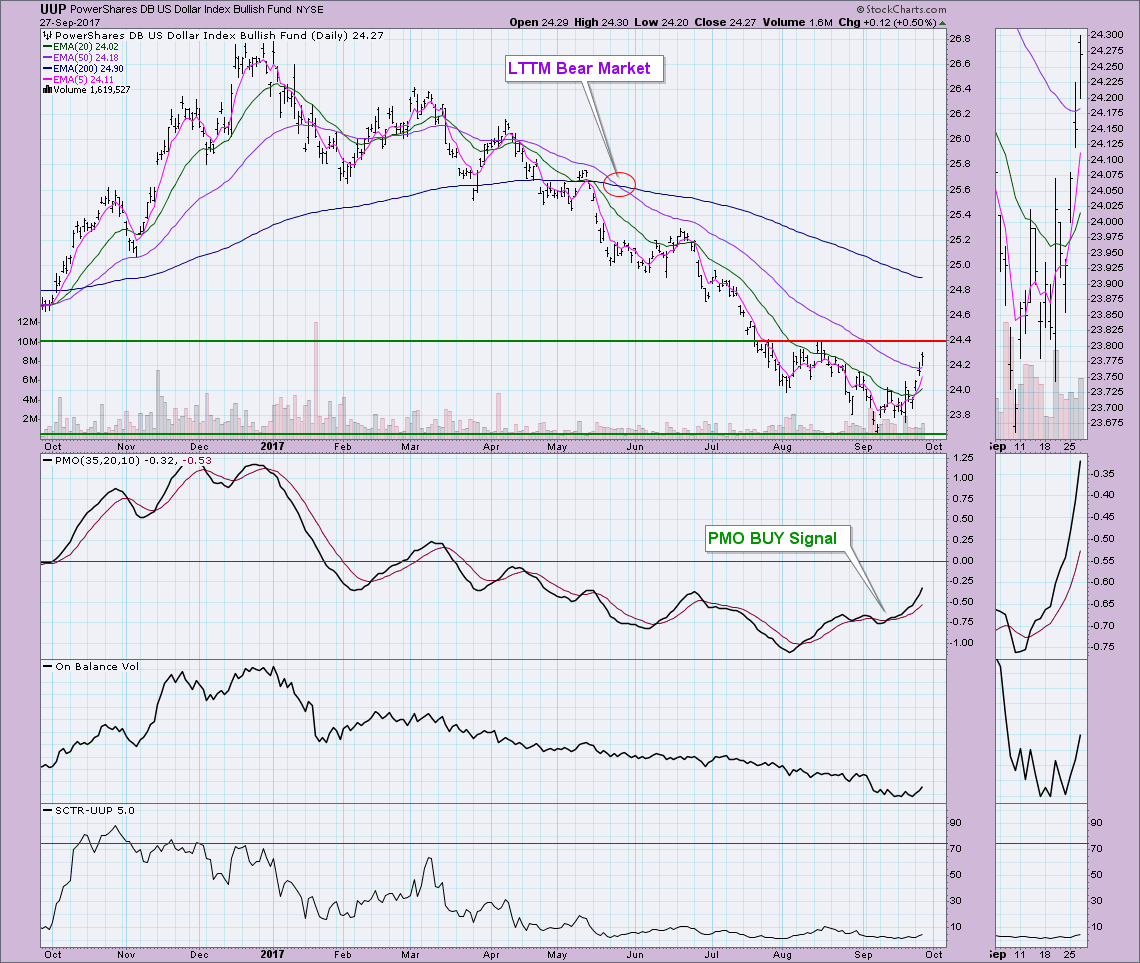 Gold was due for a pullback but we have a correction on our hands. With the Dollar rallying and likely to continue that rally, Gold will likely struggle. There is a possibility of support around 1265 where the February top came in, but I think the correction could continue on to 1210. The real test will be at the 200-EMA. If price can't pull it together and loses that support, 1210 will not be far off. 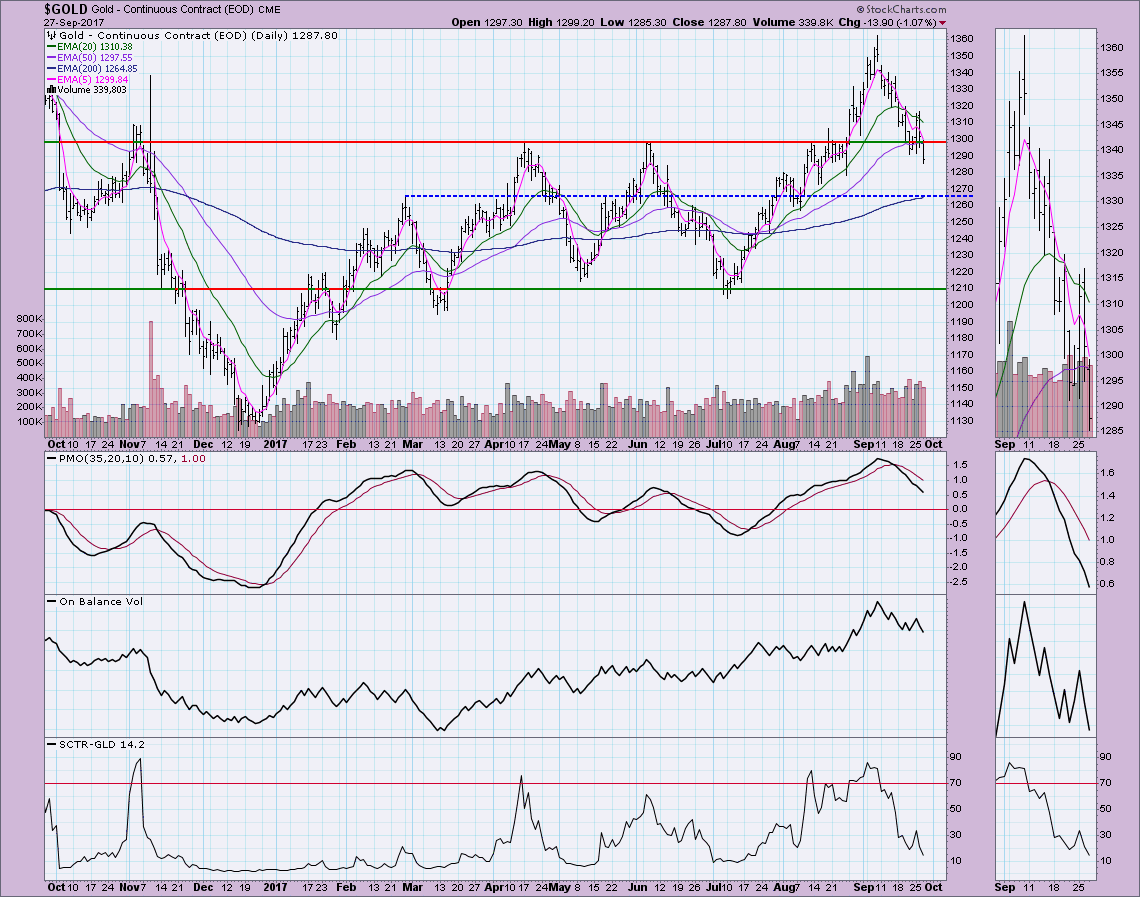 With the rally in the energy sector, Oil has been enjoying a great rally. I would hold off getting in right now. We may be looking at an exhaustion gap or island reversal. In order to close the gap from Monday, price would have to move to $10.25 or so. I'd get concerned if we see price dip below the 200-EMA. The PMO is getting overbought but is rising strongly. I do like the look of the bull flag in the thumbnail of $WTIC. Upside potential, interestingly, puts Oil around $54/barrel. 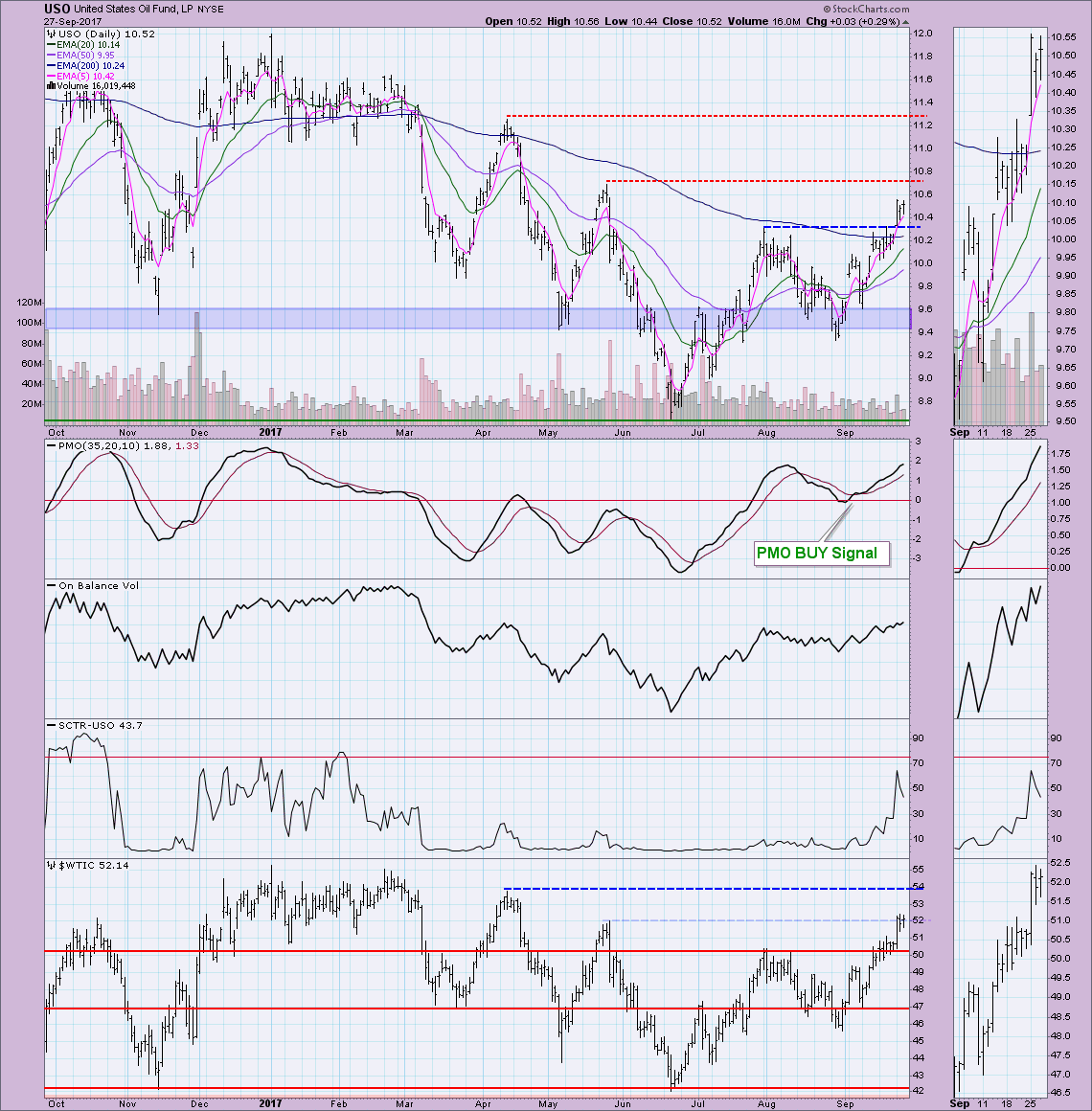 Nothing good here. TLT continues to suffer. The PMO is reaching near-term oversold territory, but with a chart this ugly, I expect the PMO to hit negative territory before it even considers bottoming. There's a good chance we'll see a rebound off the $122 level, but again, this chart is ugly and I know talking to Tom Bowley in the mornings on MarketWatchers LIVE (see the latest episode here!), that he expects Treasury Yields ($TNX) to continue rising. That would be bad for bonds. 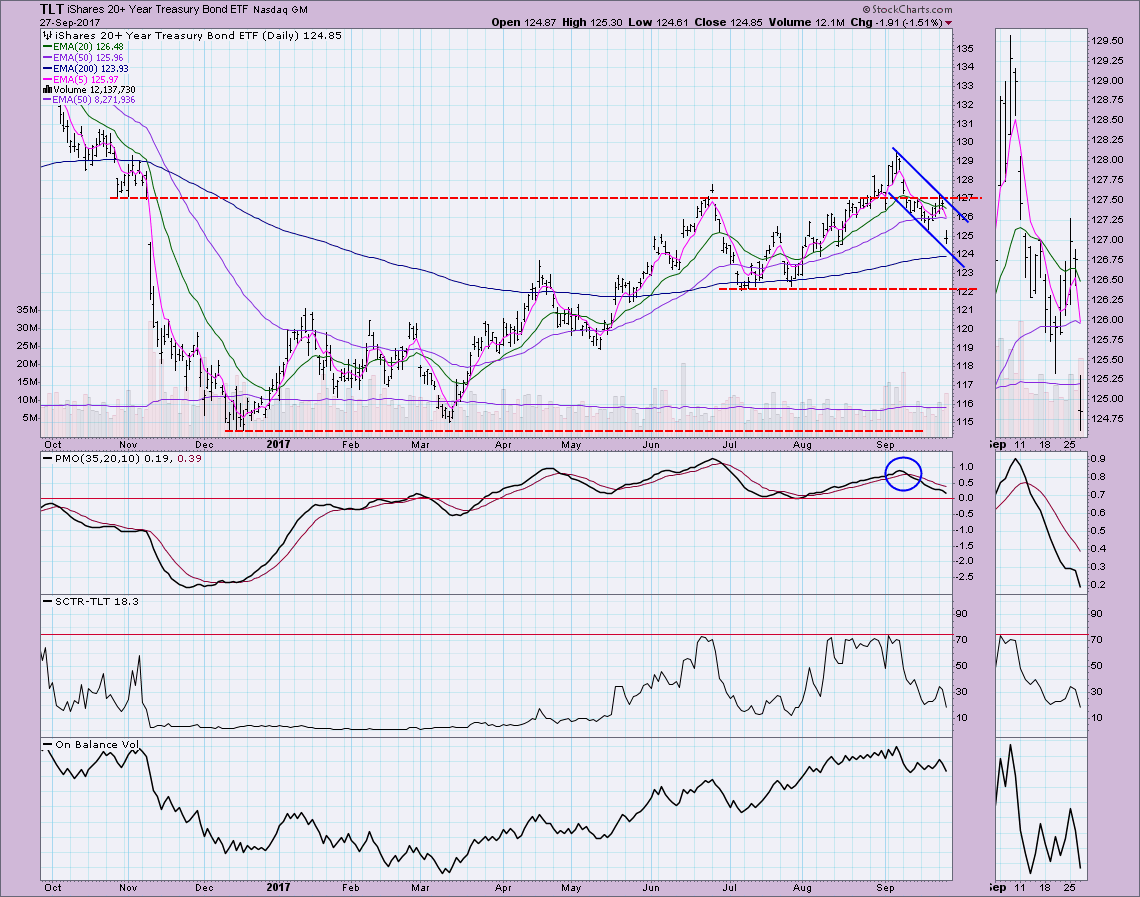