It may seem strange that all of the Scoreboards are green except in the area of intermediate-term PMO signals. A look at the weekly charts for all four indexes reveals all but the NDX weekly PMO are rising up toward IT PMO BUY signals. The margin is still rather large so I wouldn't expect to see these signals update until next Friday at the earliest. To see the weekly charts (including daily and monthly charts) of the four Scoreboard indexes, go to the DecisionPoint ChartList. The link is located at the top of the main DecisionPoint blog page. 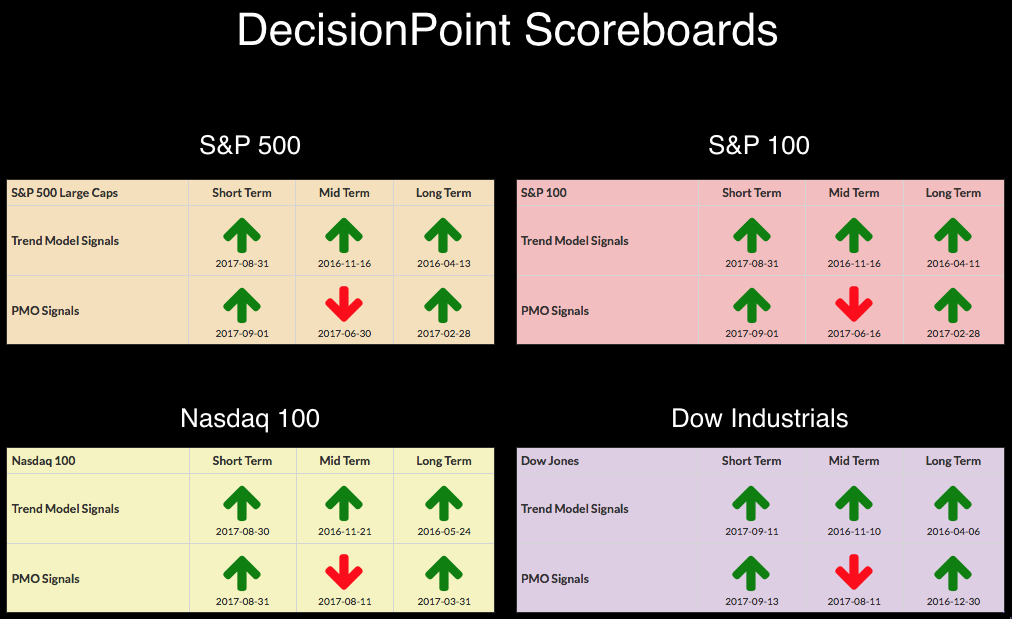 The intraday highs of yesterday were challenged, but resistance held. I've been looking for a short-term "pause" as our short-term indicators are very overbought. I suspect this area of consolidation will continue a few more days.

I've annotated a loose rising trend channel for the SPY. I continue to look for consolidation or a pullback, but it is hard to argue against the indicators on this chart, with the PMO being primary. It is rising strongly. However, note that the previous PMO top is still below the current reading which sets up a negative divergence (should the PMO turn down before reaching above that top). OBV looks positive and is behind the current move. 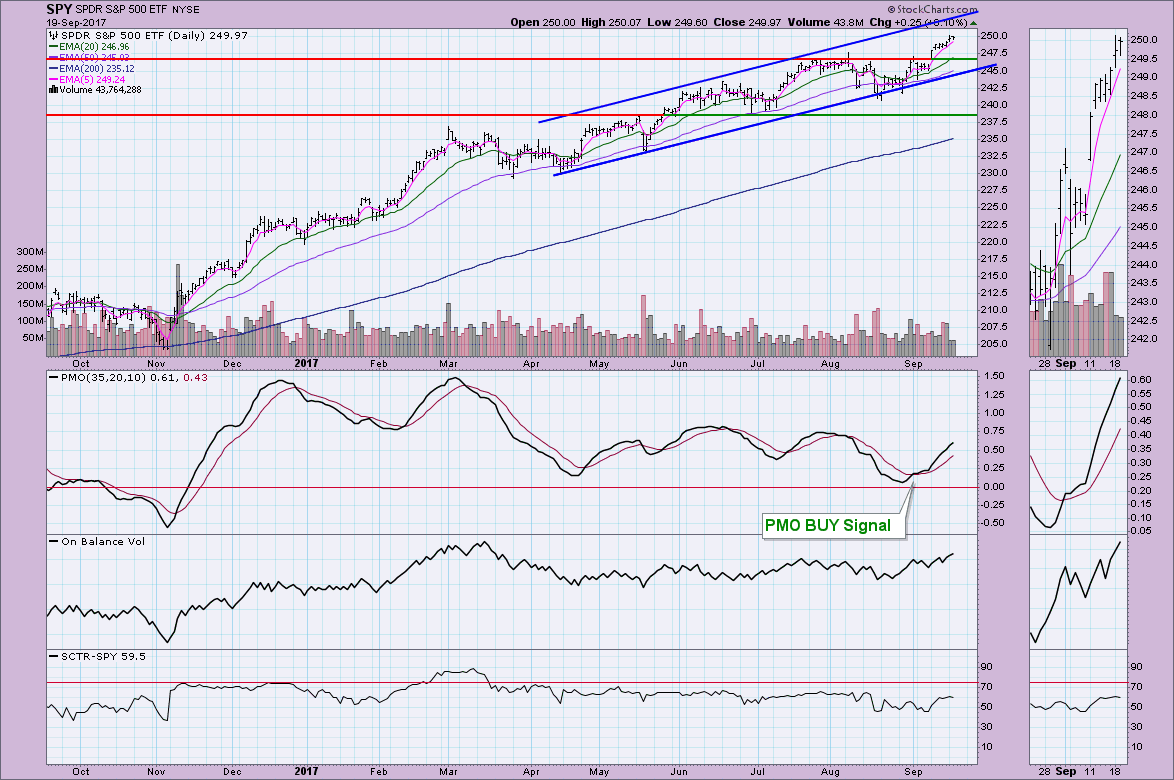 Ultra-Short-Term Indicators: I noticed that the VIX is finally starting to challenge the upper Bollinger Band. This generally sets up a one or two day decline (or consolidation). The bands on the VIX are getting very tight again and we know from earlier this summer that this indicator is less helpful. Ultimately, the market is getting a bit complacent based on the low VIX reading and that usually a time for a pullback. 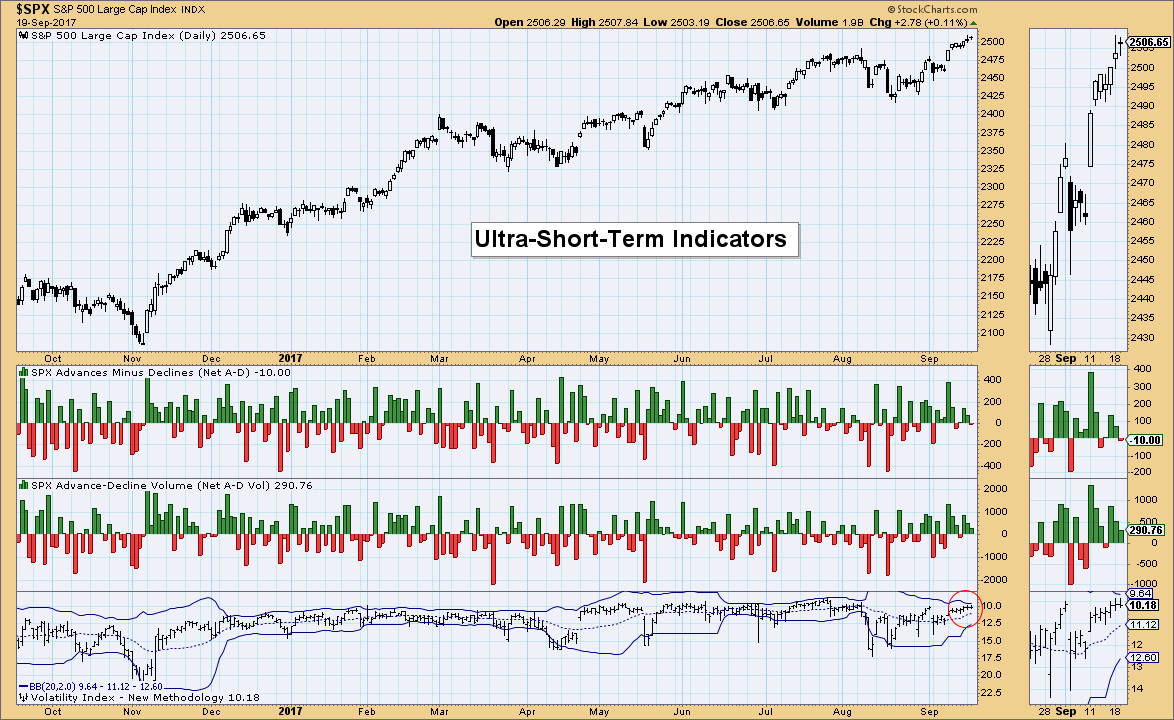 Short-Term Indicators: The rising bottoms of the STO-B have now been broken as it moves lower. This is exactly what is needed right now and two days of moving mostly sideways on the 10-minute bar chart explains the decline of the STO-B and STO-V. We don't need to see these readings dip below zero. In fact, if they turn up before going negative, I find that shows internal strength. For now, more consolidation or decline is needed to finish the job. 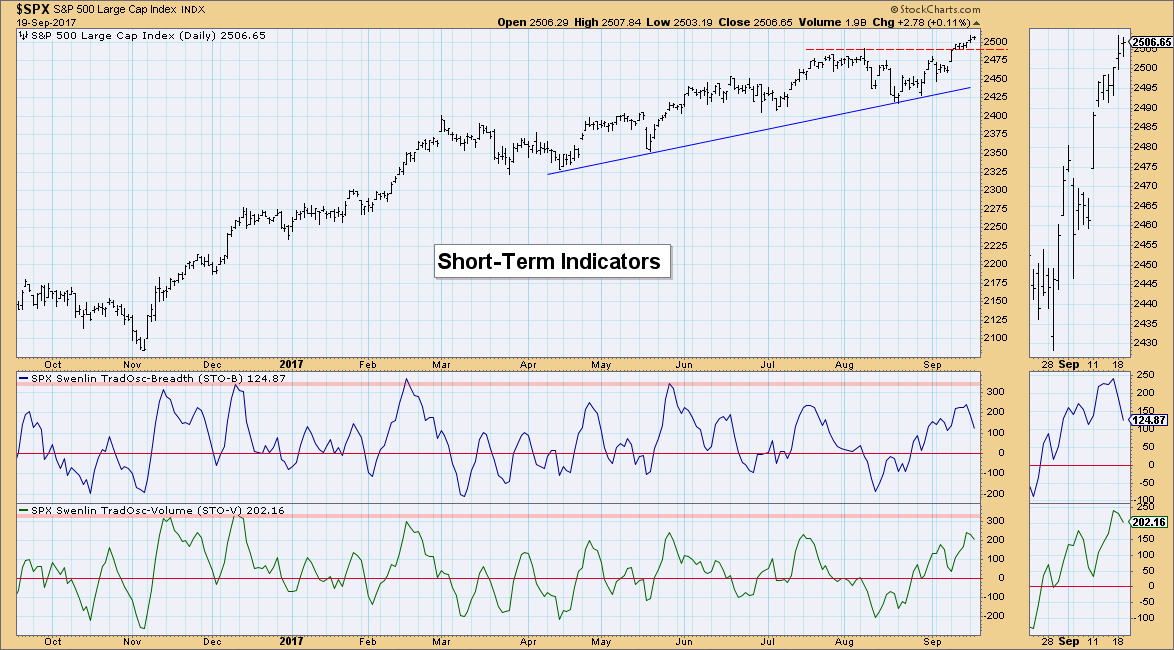 Intermediate-Term Indicators: After short-term indicators unwind, the intermediate-term indicators tell us to expect the rising trend channel to be maintained. While they are getting near-term overbought, there is still plenty of room for them to meander higher. 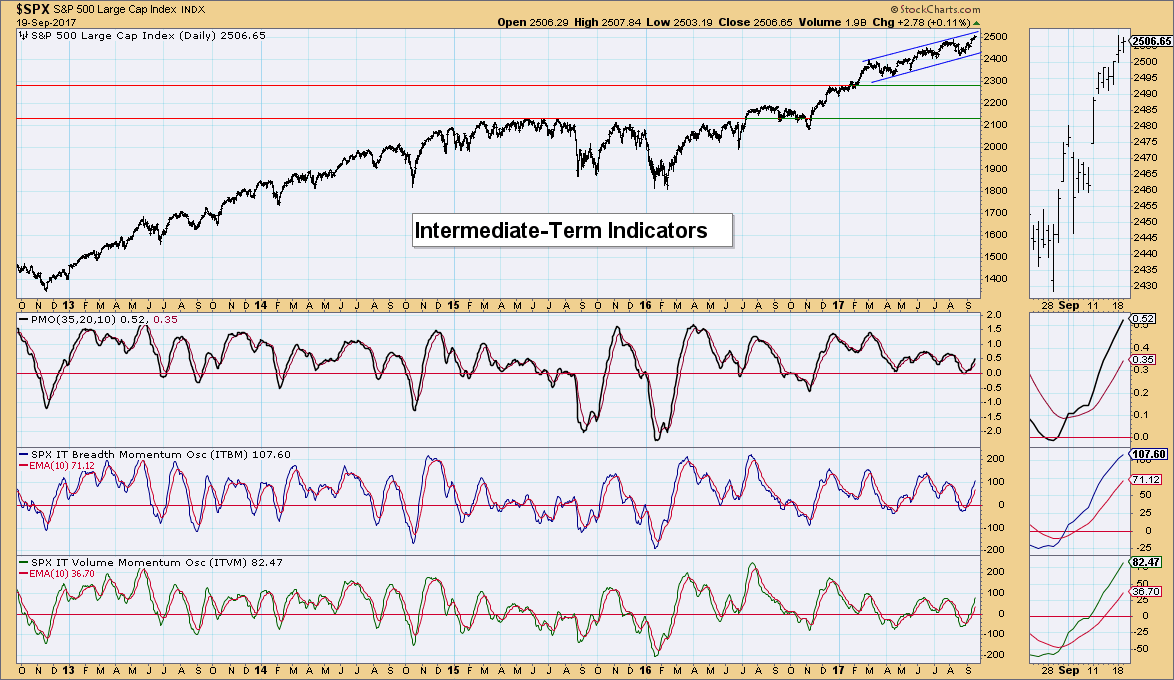 Conclusion: The intermediate-term picture remains rosy, but the short-term picture is a bit more murky. Based on the VIX and declining overbought short-term indicators, I still expect to see a pullback or at least some consolidation. The PMO on the SPY suggests a decline isn't necessarily ahead, but the PMO can be viewed as an intermediate-term indicator and it is in concert with the ITBM and ITVM. I'm looking for a boring week and some excitement in the next two.

The Dollar is desperate to breakout in the short term, but it continues to fail the test of the declining tops trendline. The good news is that support is holding at this month's low and the PMO is on a BUY signal. It appears the PMO is preparing for a positive divergence between PMO tops and price tops. The OBV, however, is still in a negative divergence with price. 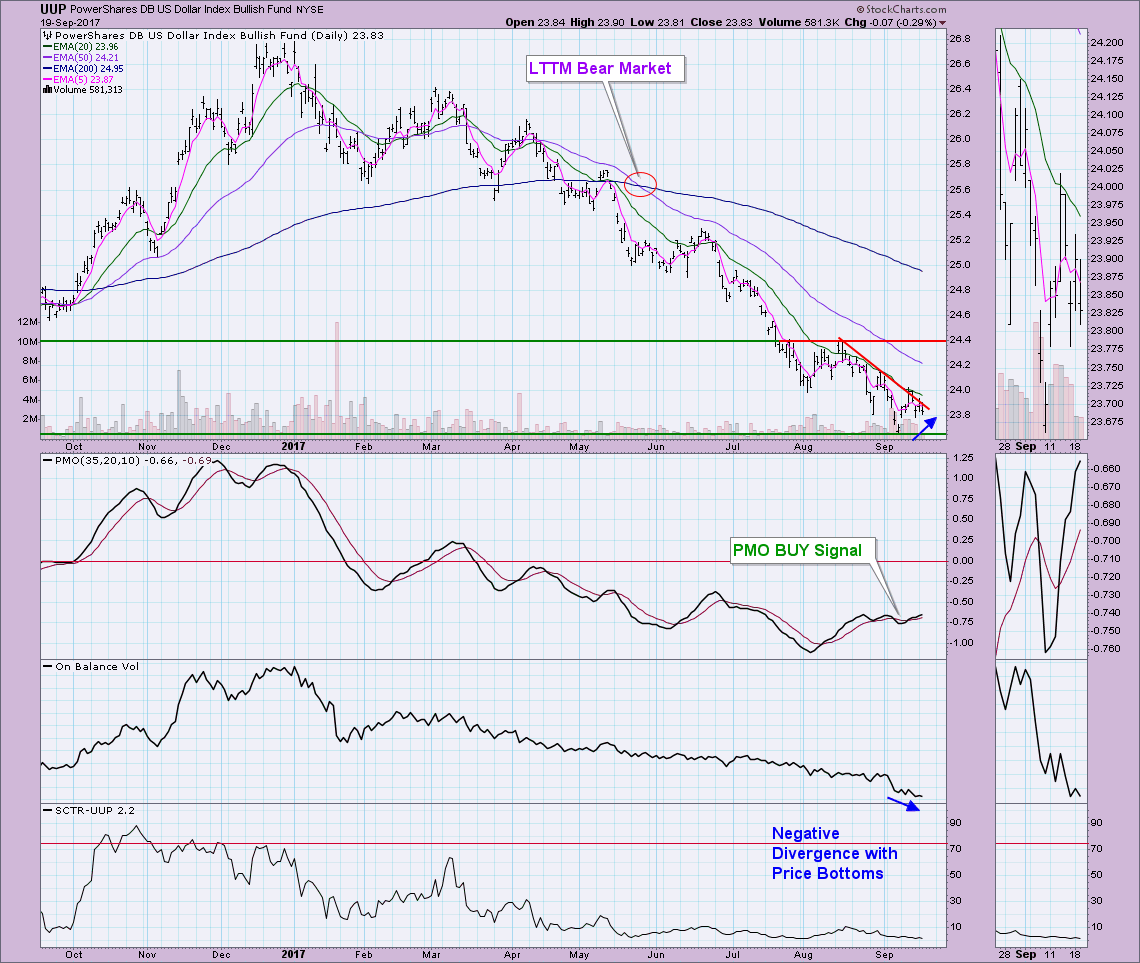 The recent PMO SELL signal prepared us for this pullback on Gold. I suspect a test of $1300 before the rally can resume. The steep rising bottoms trendline was broken yesterday. It isn't out of the question that Gold could fall below the $1300 level based on the overbought extreme that the PMO must clear from. For the past year, the PMO has had very clean and accurate crossover signals. Caution is warranted and maybe a stop just above $123.50 for GLD. 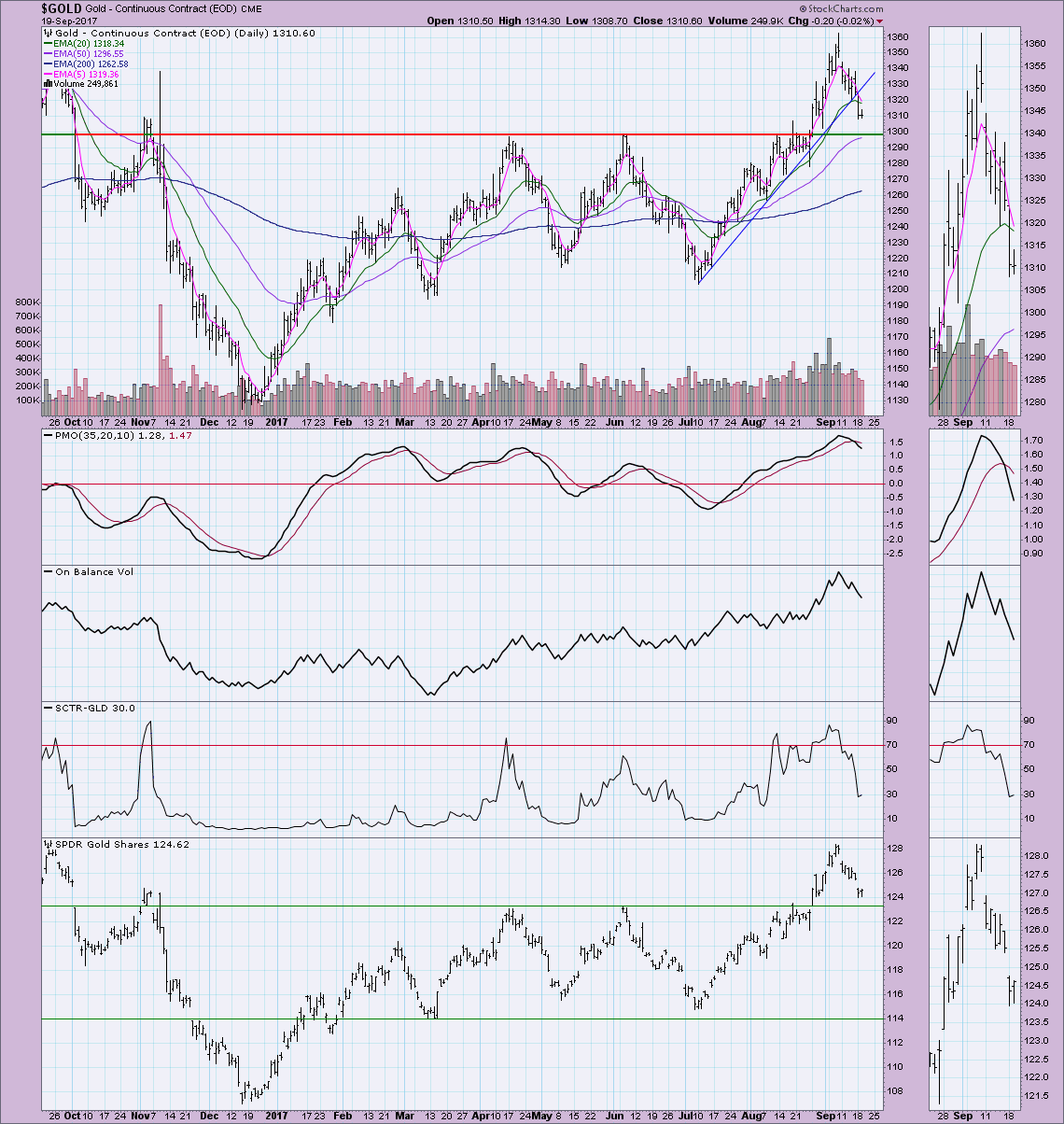 Everyone is bullish Oil these days, but I continue to have heartburn when I look at this chart. I've suspected for the past month that overhead resistance at $10.30 would prove very difficult to surpass despite the PMO BUY signal and positive OBV. I was starting to have hope when I saw the SCTR recovering, but another day with USO unable to surpass overhead resistance is troubling. If the PMO tops here, we have a strong negative divergence. Oil itself has broken above the declining tops line as well and unlike USO has had intraday readings above horizontal resistance at the July/August top. I'll not get bullish until it can overcome that resistance level. It is good to see price remaining above the declining tops trendline, but this latest rally is still suspect to me. 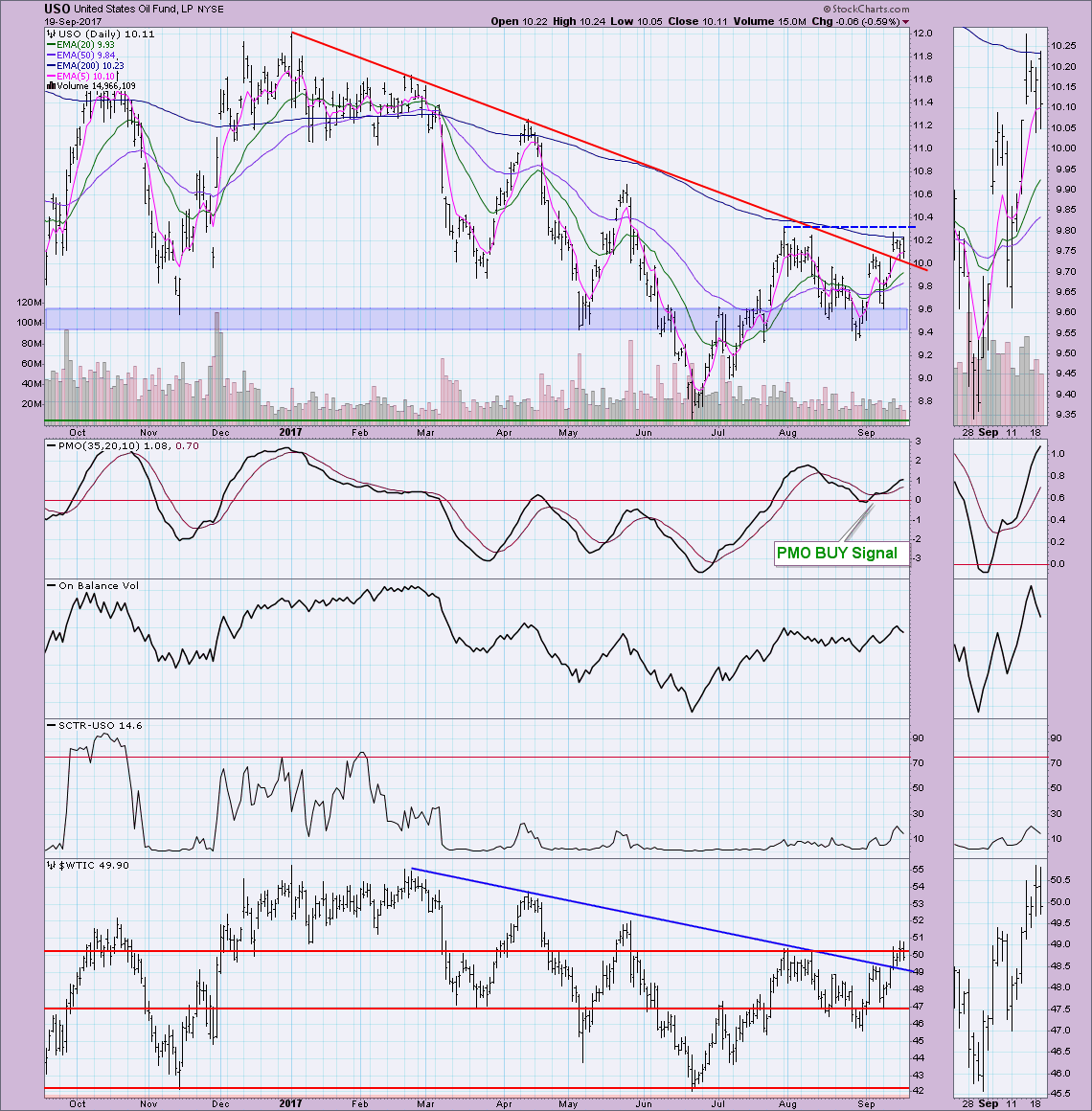 The picture remains negative for Bonds. The 50-EMA was just broken. the PMO is very negative and if you compare PMO tops to price tops, we have a negative divergence. I don't think this is the bottom for Bonds. I'd be looking toward $122 for support. 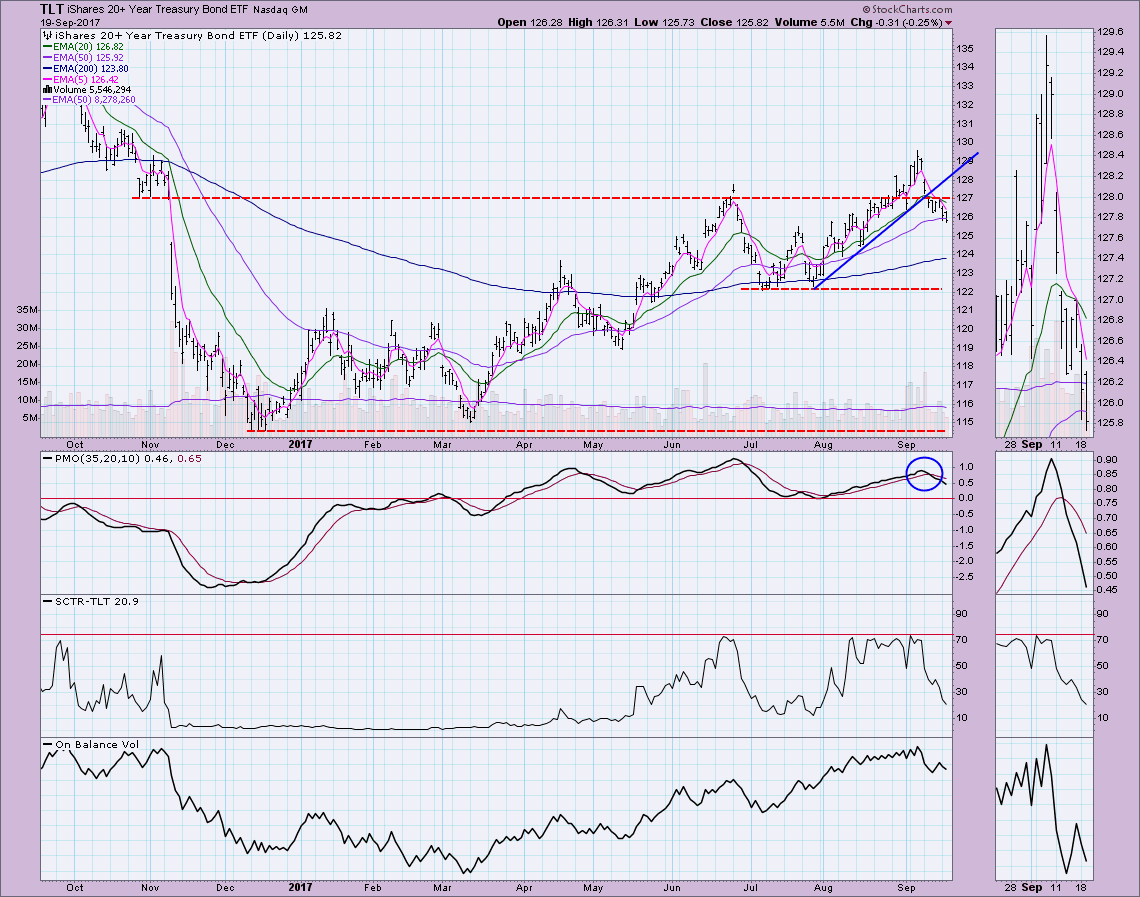