No new changes on the DecisionPoint Scoreboards at this time, but we should see the IT PMO signals change on Friday. I was notified by my Technical Alert that weekly PMO crossovers occurred on all but the NDX. These signals will need to stay intact at the end of trading on Friday for them to become documented signals. 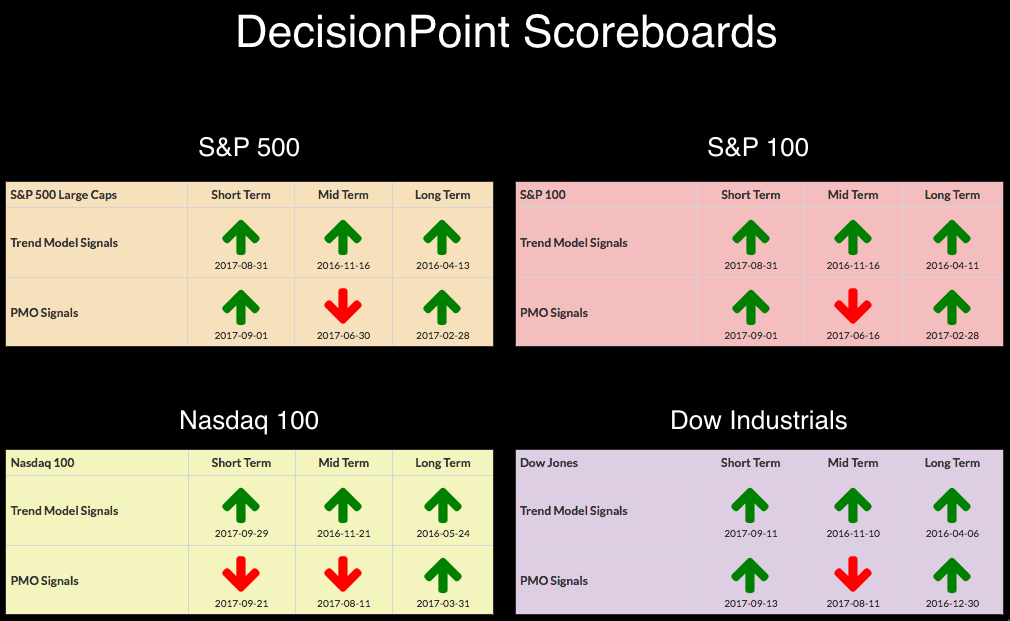 The Utilities sector has had a bad month, but they may have begun bottoming. The 20-EMA crossed below the 50-EMA while the 50-EMA was above the 200-EMA which triggered the IT Trend Model Neutral signal. I notice that the OBV and heavy buying over the last two days could mean we are looking at some accumulation at a possible bottom. At this point, volume is the only bullish attribute on this chart. We still aren't seeing a breakout above short-term declining tops trendline. 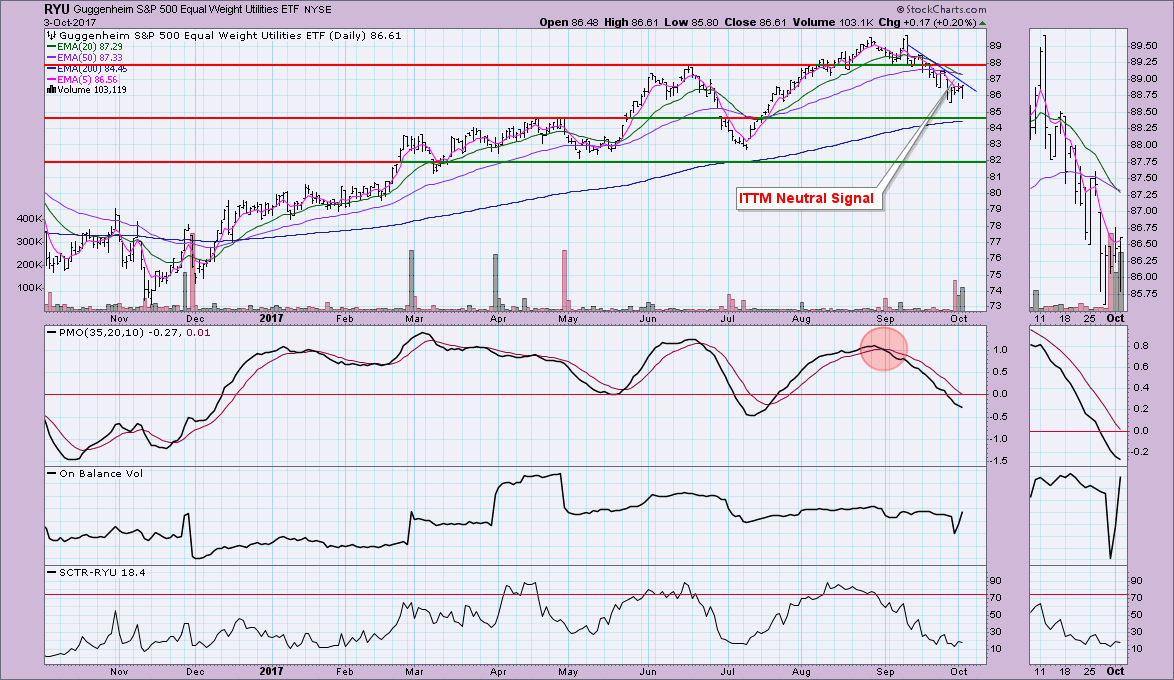 It's impossible to ignore this rally when you see it on the 10-minute bar chart. Interestingly, the angle of ascent has been rather steady. I'll be watching to see if we get a pullback that breaks this ascension.

I think this is a fairly good place for price to pullback. We see that today's high tapped on the top of the rising trend channel. While this could mean a drop to the $247.50 to test the bottom of the channel, the PMO looks a bit too healthy for us to see that steep of a decline. More likely we will see consolidation, although discussion of tax cuts could interfere and continue to fuel the rally somewhat artificially. 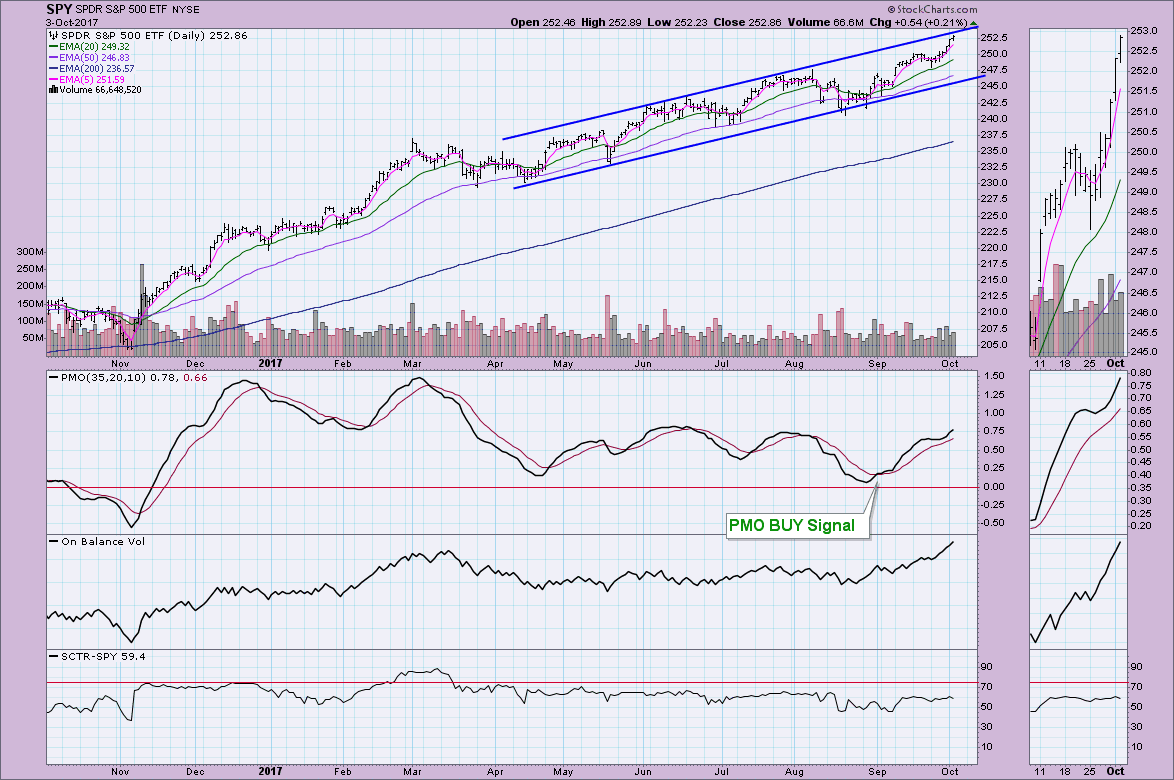 Ultra-Short-Term Indicators: Readings show elevated participation this week, but today saw a slight decrease. The VIX is meandering along the top of its average which suggests internal strength via market complacency. 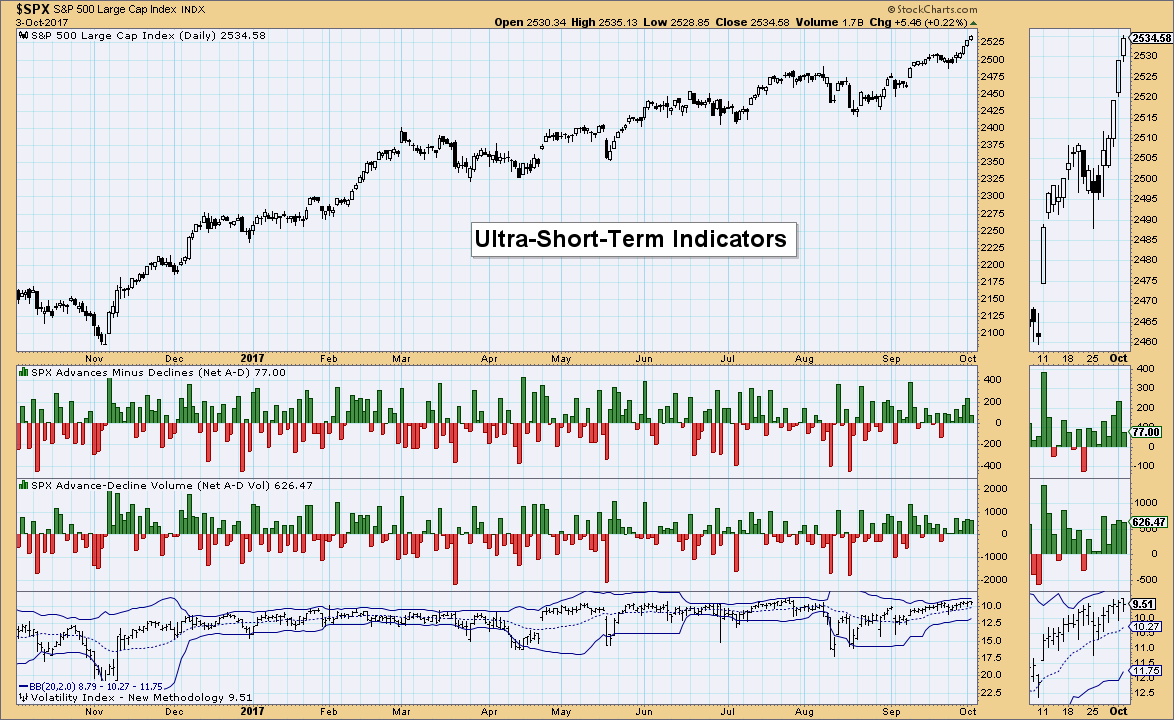 Short-Term Indicators: These indicators continue higher quickly. We're now seeing some overbought readings that will need to be cleared. We can see that the slight decline/consolidation mid-September provided it. We see that on the SPX, price did breakout slightly from the rising trend channel. While this could be seen as an initiation, I suspect it is a buying exhaustion lining up. 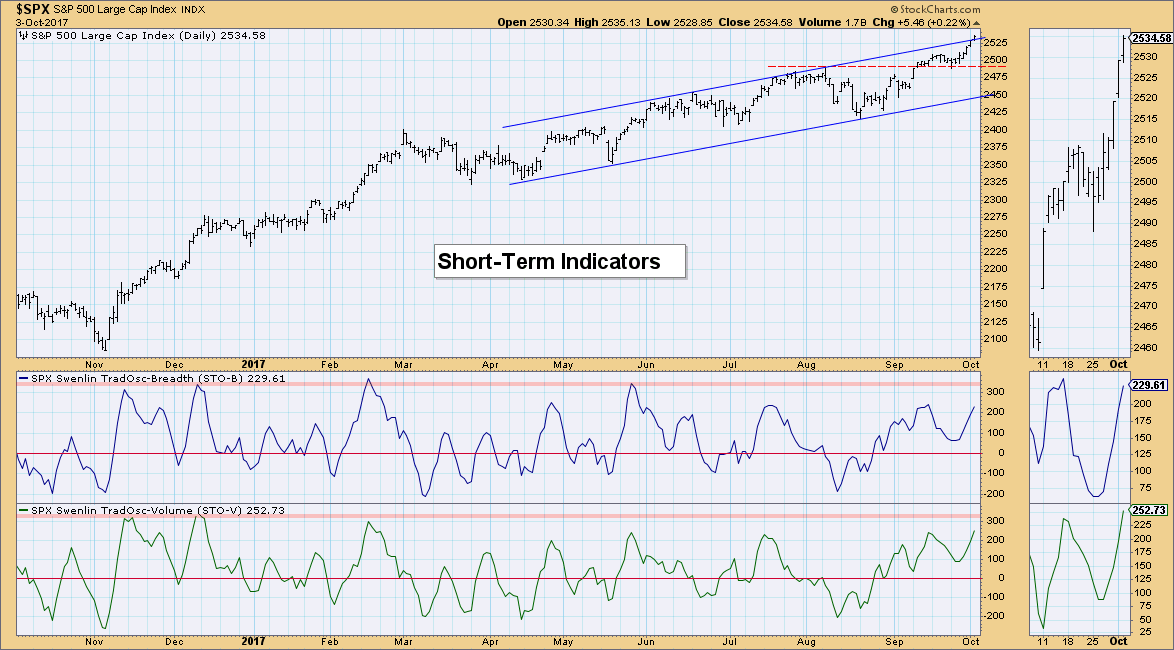 Intermediate-Term Indicators: These indicators look great, but they are now near-term overbought and heading for overbought extremes. 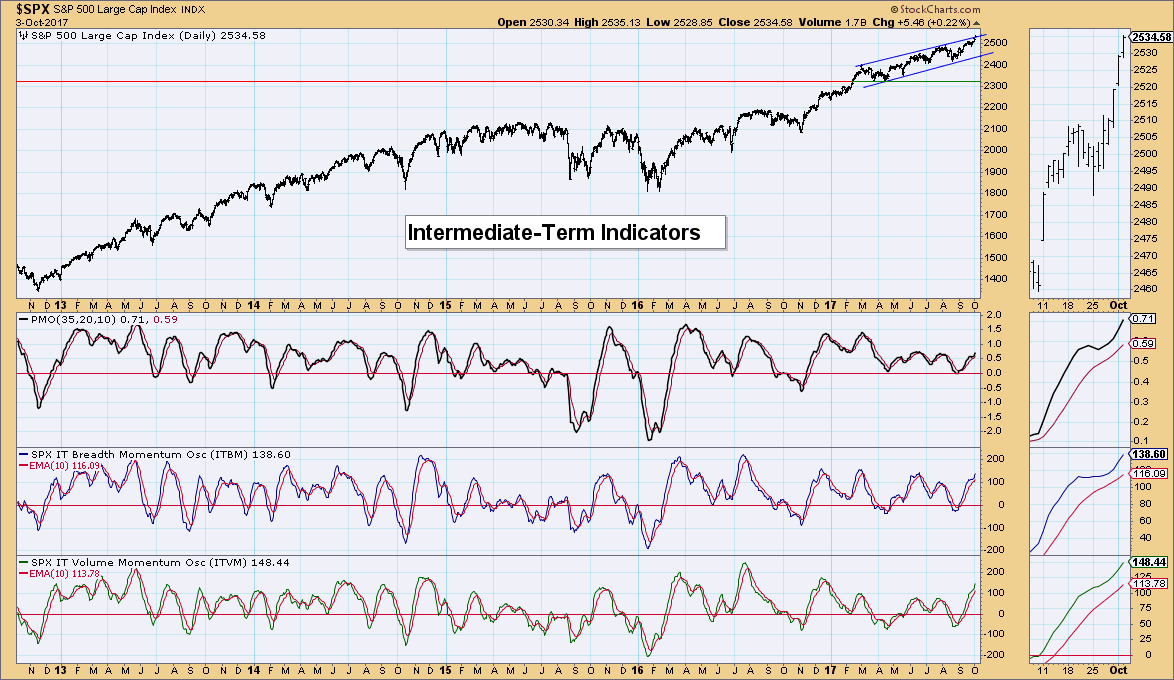 Conclusion: I think the rally isn't over, but I do believe its steep rise is going to be compromised with some consolidation or a pullback. I think this week we'll finish fine, but next week could have some decline in store given the overbought ST and IT indicators.

I note three gaps that formed this week and last. They appear to be a breakaway gap to begin and two runaway gaps following. UUP is at a critical point. Overhead resistance is now being encountered and the final gap could end up being an exhaustion gap that pulls price down to close the last gap or maybe two. Unfortunately with gaps, you usually don't know exactly what you have until they execute. The PMO is very healthy but OBV tops are declining. The Dollar is overdue for a comeback, but I think we will have to close up the last two gaps before resistance will be broken. 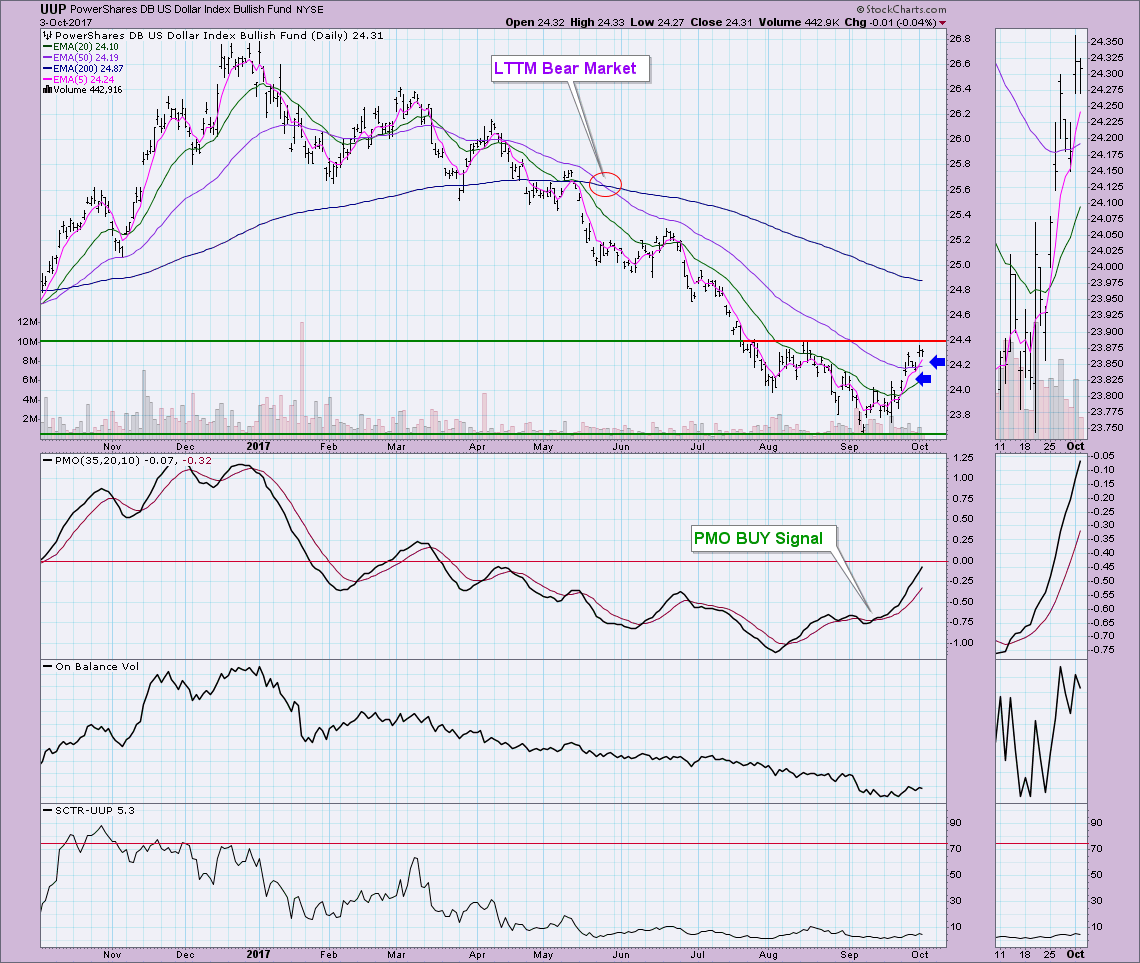 Gold is reaching support at the February high. I suspect we will see a rebound here around 1260, but likely a dead cat bounce before price tests the 1210 area. I've been very bullish on Gold, but I'm not anymore given the declining indicators and the Dollar above being ready to rally again. 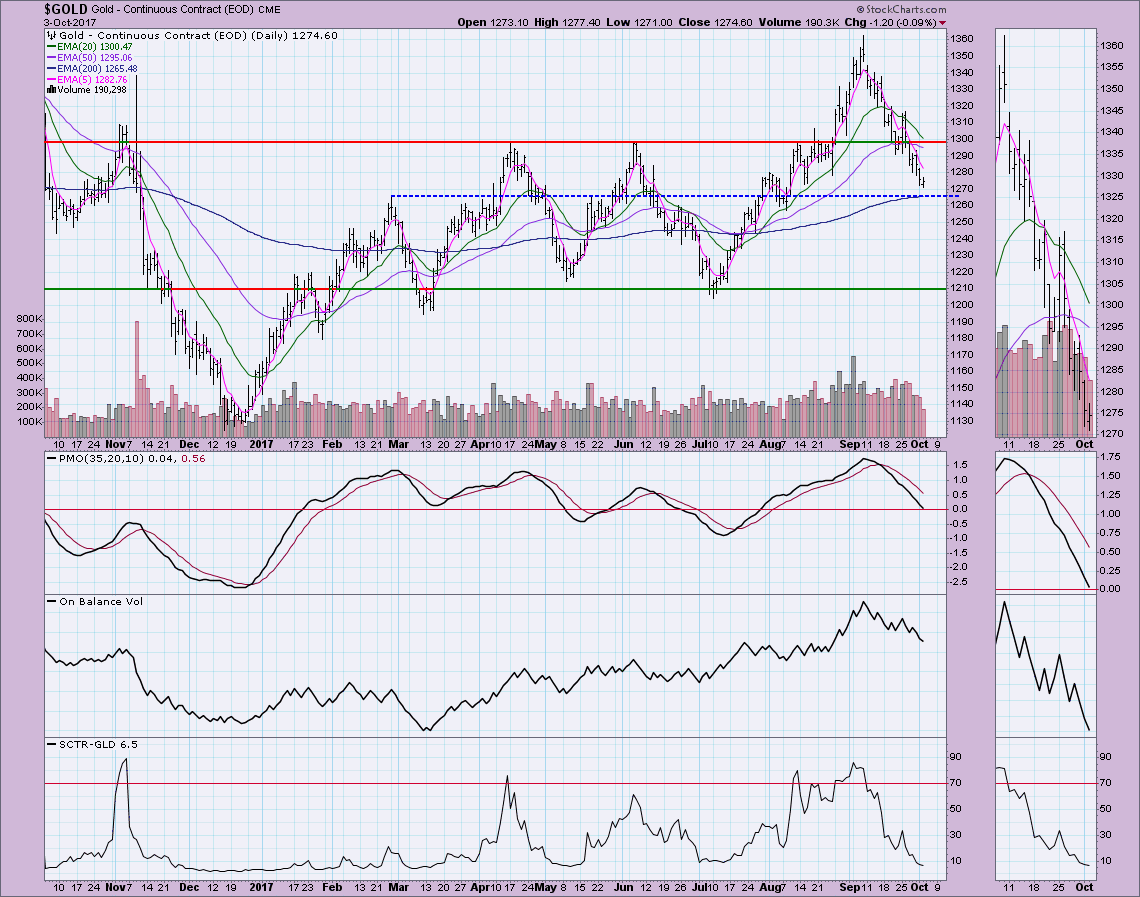 USO formed an island reversal last week and now might be setting up yet another; this time to reverse back up. However, the failure to pop through resistance at $10.70 and the loss of support at $10.30, the topping PMO in overbought territory, the plunge of the SCTR and bearish confirmation on the OBV, I would vote for yesterday's gap down to be a breakaway gap that will bring price lower. 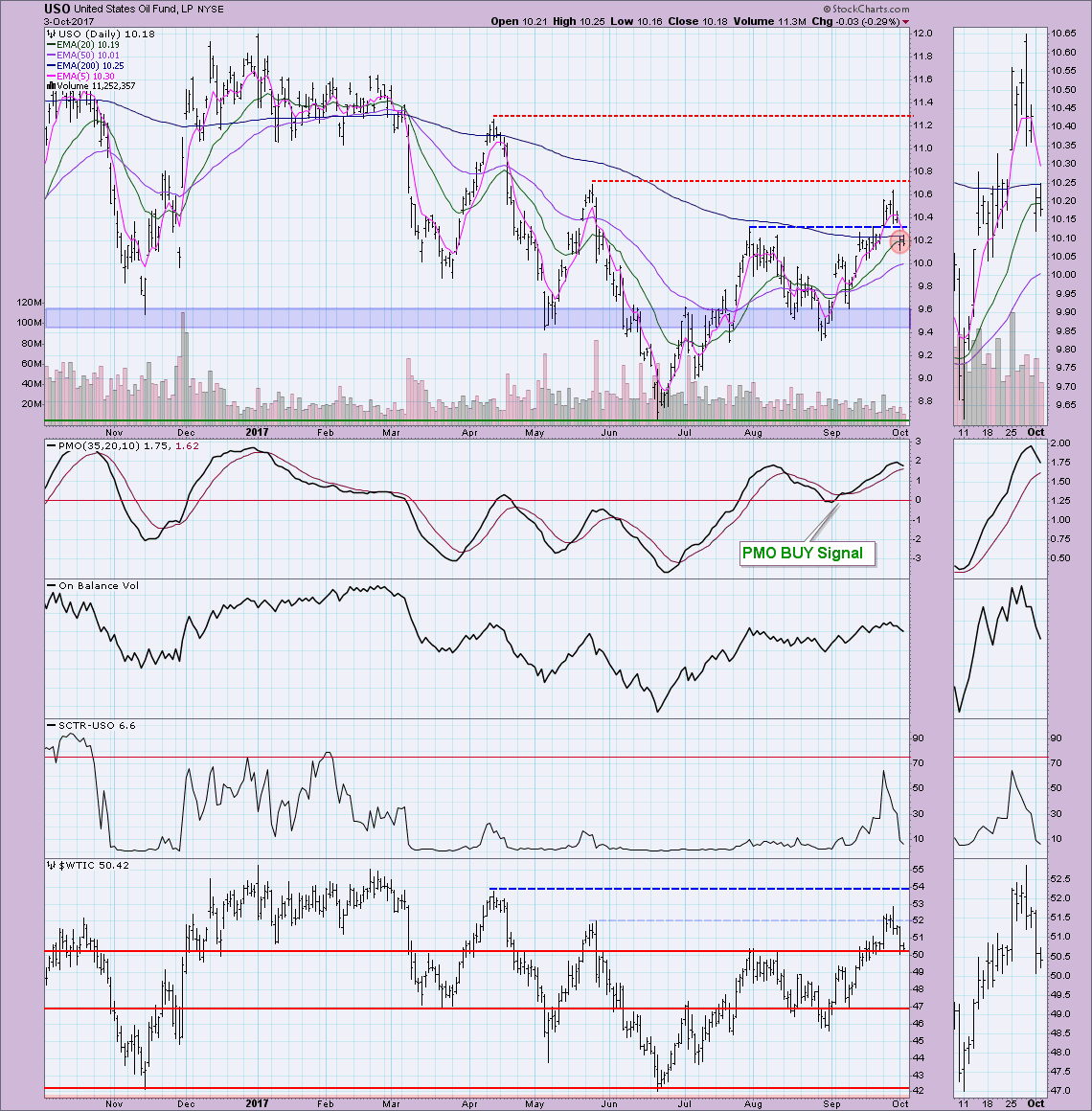 Another island has formed on the TLT chart. This could very well turn out to be an island reversal with price closing the gap but not breaking out of the declining trend channel. The indicators support the idea that prices will simply continue lower and that last week's gap is a breakaway gap to the downside. I don't see this as an island reversal. I expect to see price test the support at $122. 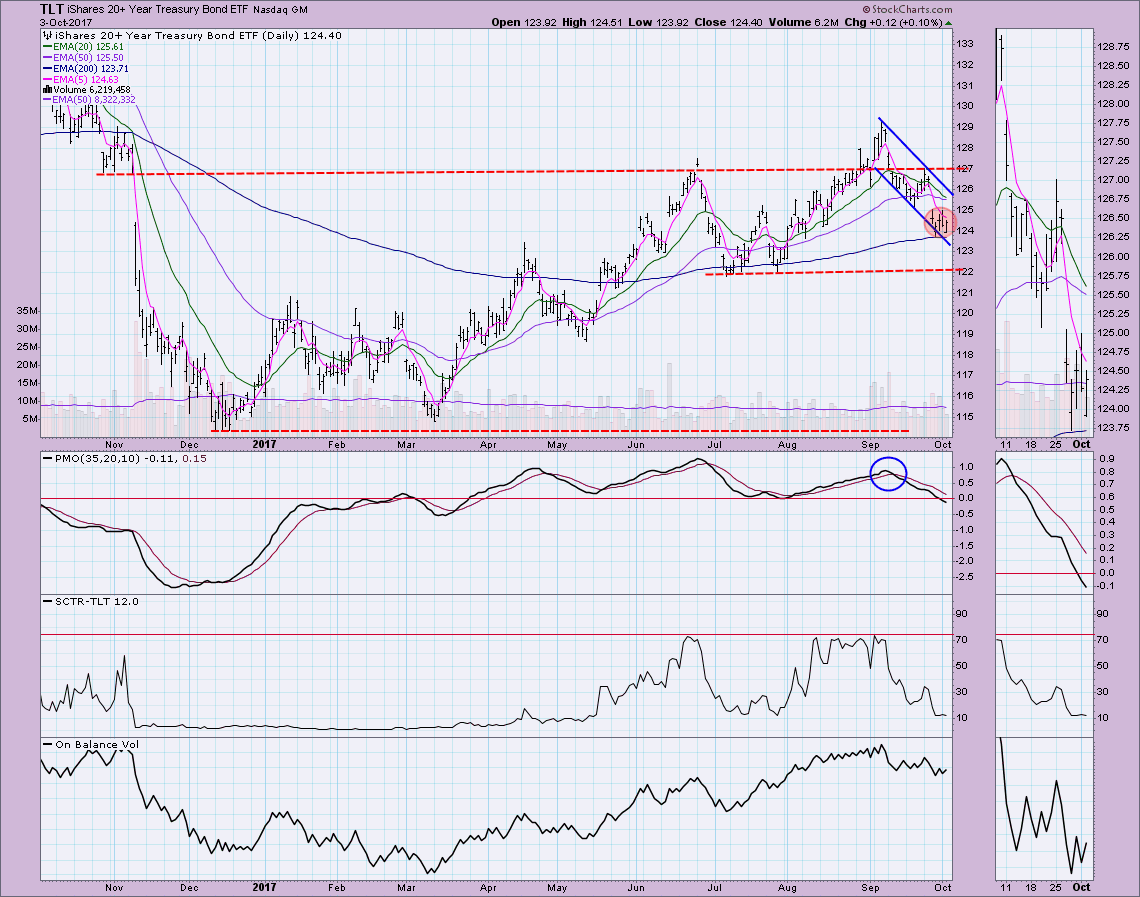