Yes, the PMO BUY signal on the SPX has already disappeared. Unfortunately with the margin so thin between the PMO and its signal line (thousandths of a point), this likely will change again tomorrow if the SPX can close higher. What is interesting...the SPY never managed a PMO BUY Signal and it has now topped below its signal line. 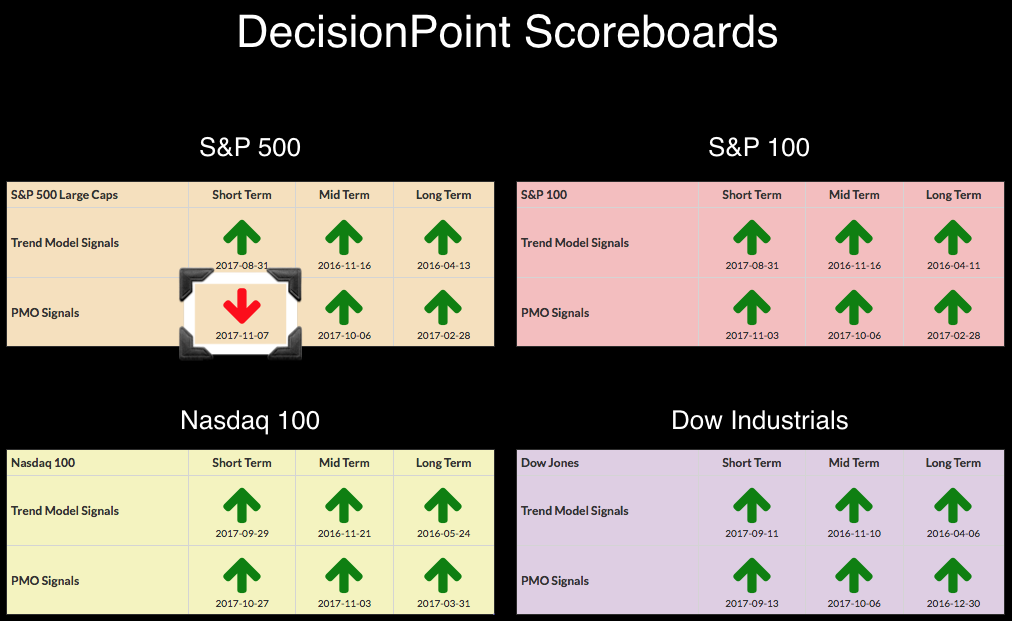 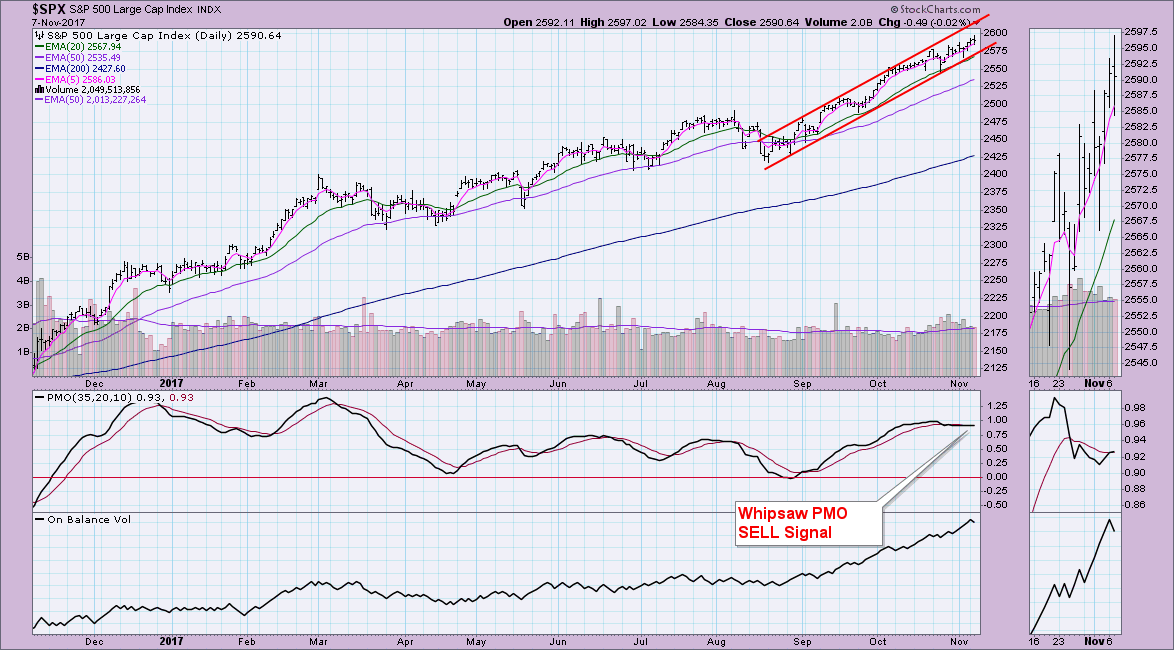 It was an interesting trading day. The market shot up on the open and then fell apart, finally finding support at Wednesday's top. A new all-time high was set intraday, but not a closing all-time high.

Is the market going to pause? Looking at the PMO on the SPY, I would say, "yes". I don't think it will be a long pause and I doubt we'll see a big pullback. The price trend is still strong and healthy and the OBV doesn't show signs of distribution, only accumulation. The saturation point has not arrived. 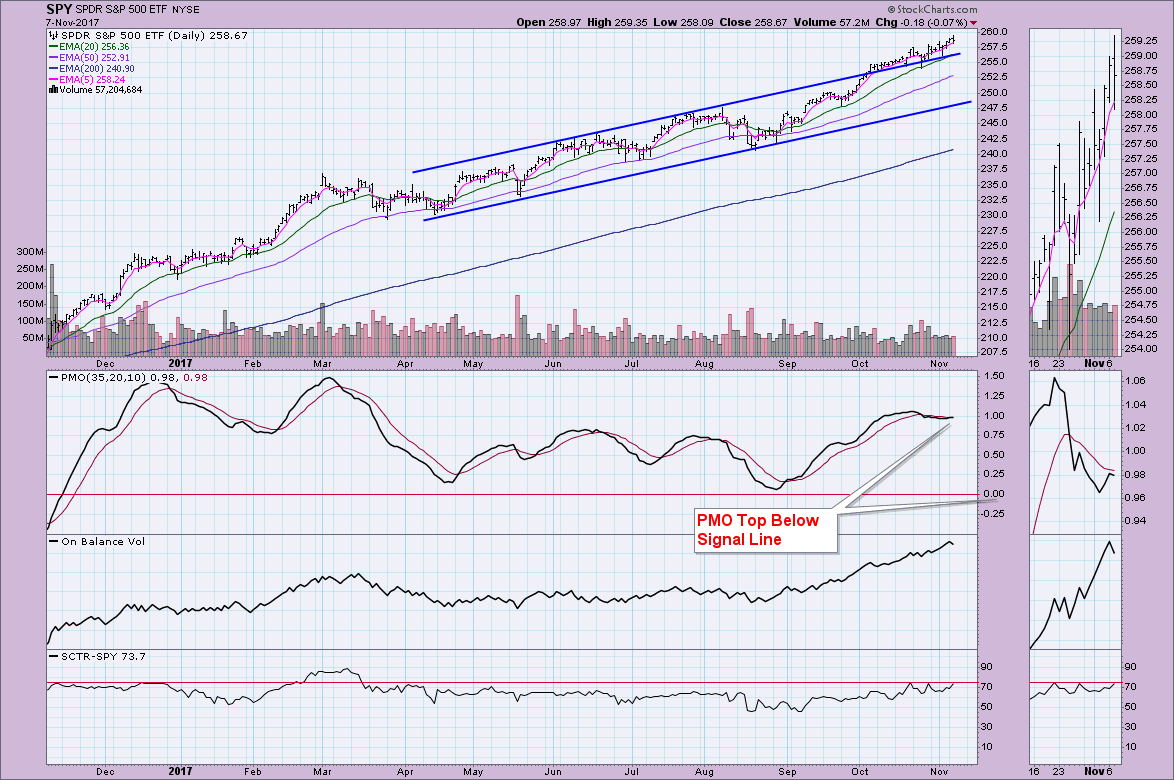 Climactic Indicators: I was hoping we'd see some climactic readings today, but the rally in the morning pretty much negated any climactic readings. I do think it is worth noting that the VIX has spent the last week hovering between 10 and 11. The complacency is stunning. But how can one argue against it when the market is making it so easy to be complacent with the hurricane force bull winds blowing. 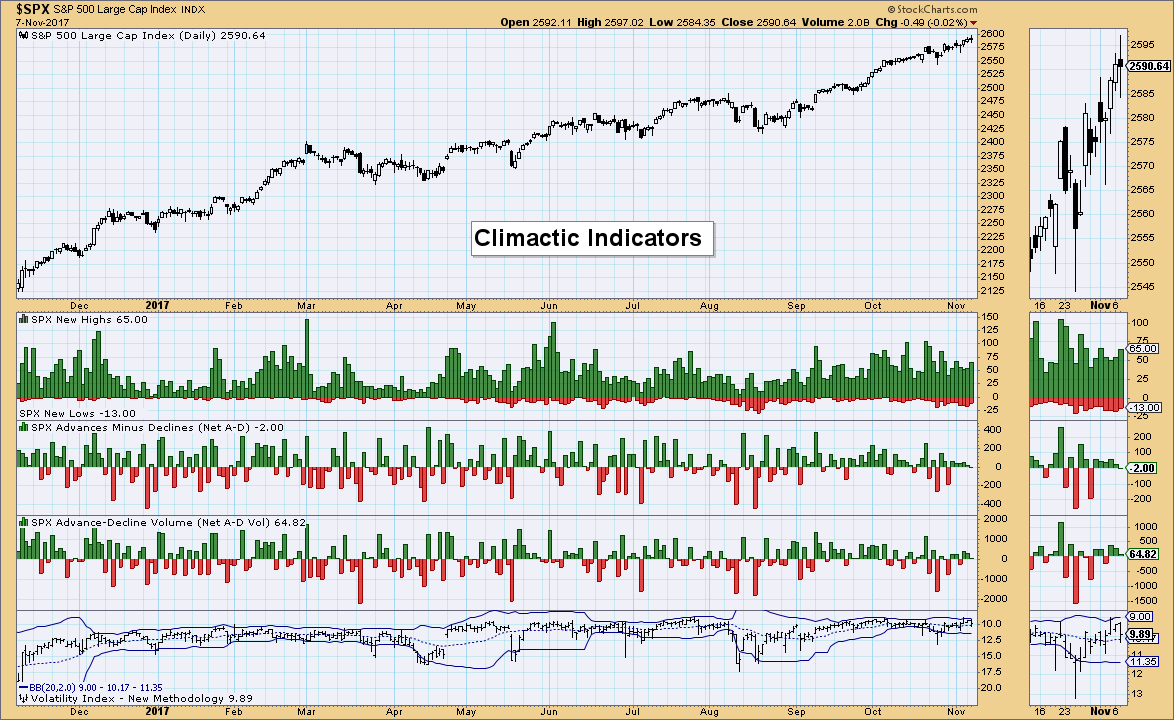 Short-Term Indicators: These indicators have been rising and we can see that since they bottomed, the market has done fairly well. I'd like to see them rise above previous tops in October, but given the rise, it's hard to be bearish in the short term. I have noted that typically when we see the IT indicators bottom at the same time as ST indicators, the rally following tends to be more healthy. 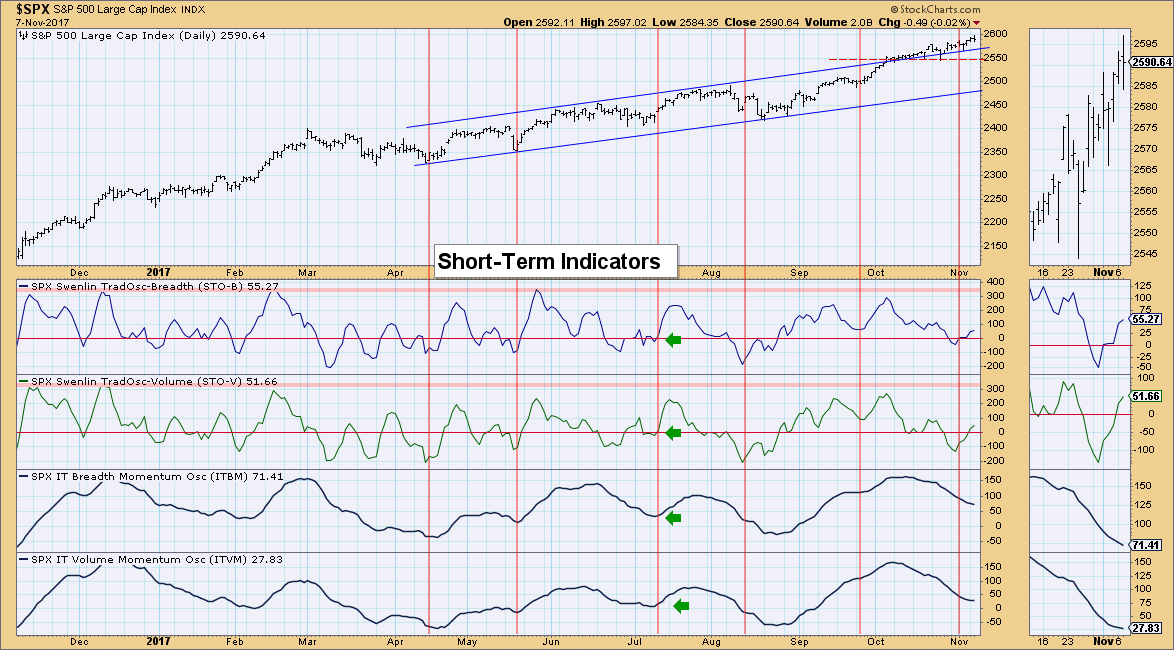 Intermediate-Term Indicators: It is fascinating to see these indicators unwinding with very little decline necessary. They are already trying to bottom. However, until they do (and give us a positive crossover), the IT picture is still on the neutral side. 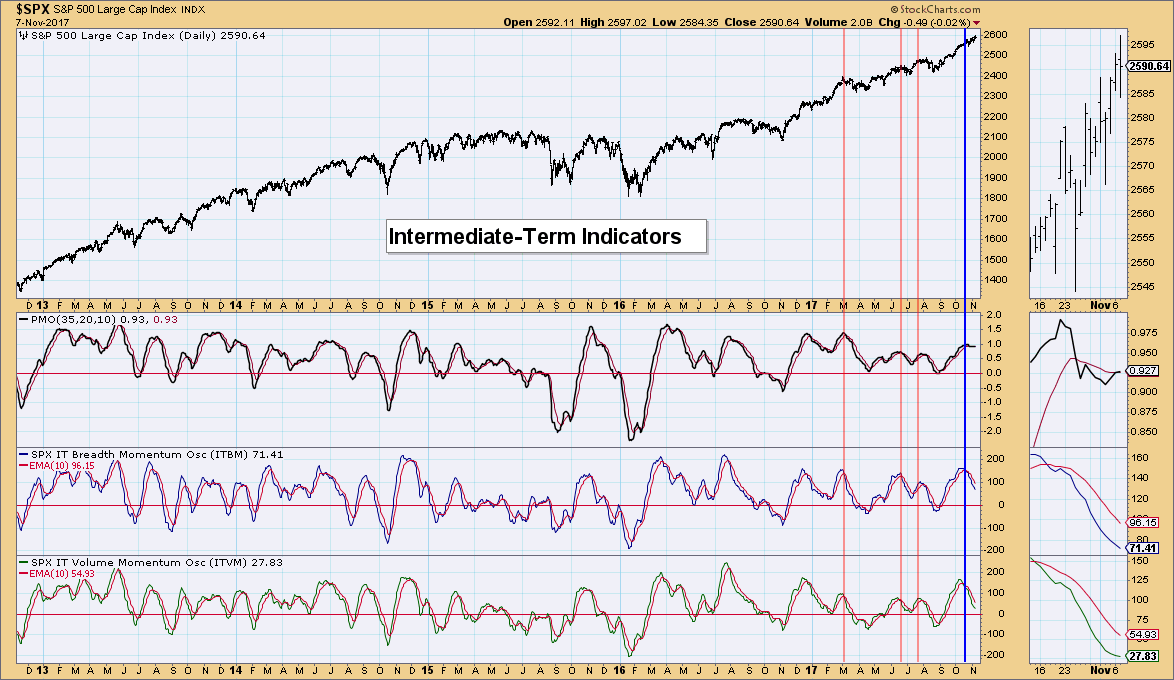 Conclusion: Seeing the PMO topping below the signal line on the SPY and the destruction of yesterday's PMO BUY signal on the SPX does have me uneasy; however, volume patterns are healthy and ST indicators are rising. IT indicators don't look terrible, but they are still declining which leaves me in the neutral position as far as the general market.

The head and shoulders pattern executed in textbook fashion, so I would expect the minimum upside target to be reached. I note that the PMO is decelerating somewhat but that is characteristic of the period of consolidation we saw in the last week and half. The 200-EMA is the next resistance area, but I don't think price for UUP will be hindered much by it. A strong dollar could pose some problems for the market based on overseas business costs rising, but it has been in such a decline for so long, I doubt it will be a problem for this teflon bull market. 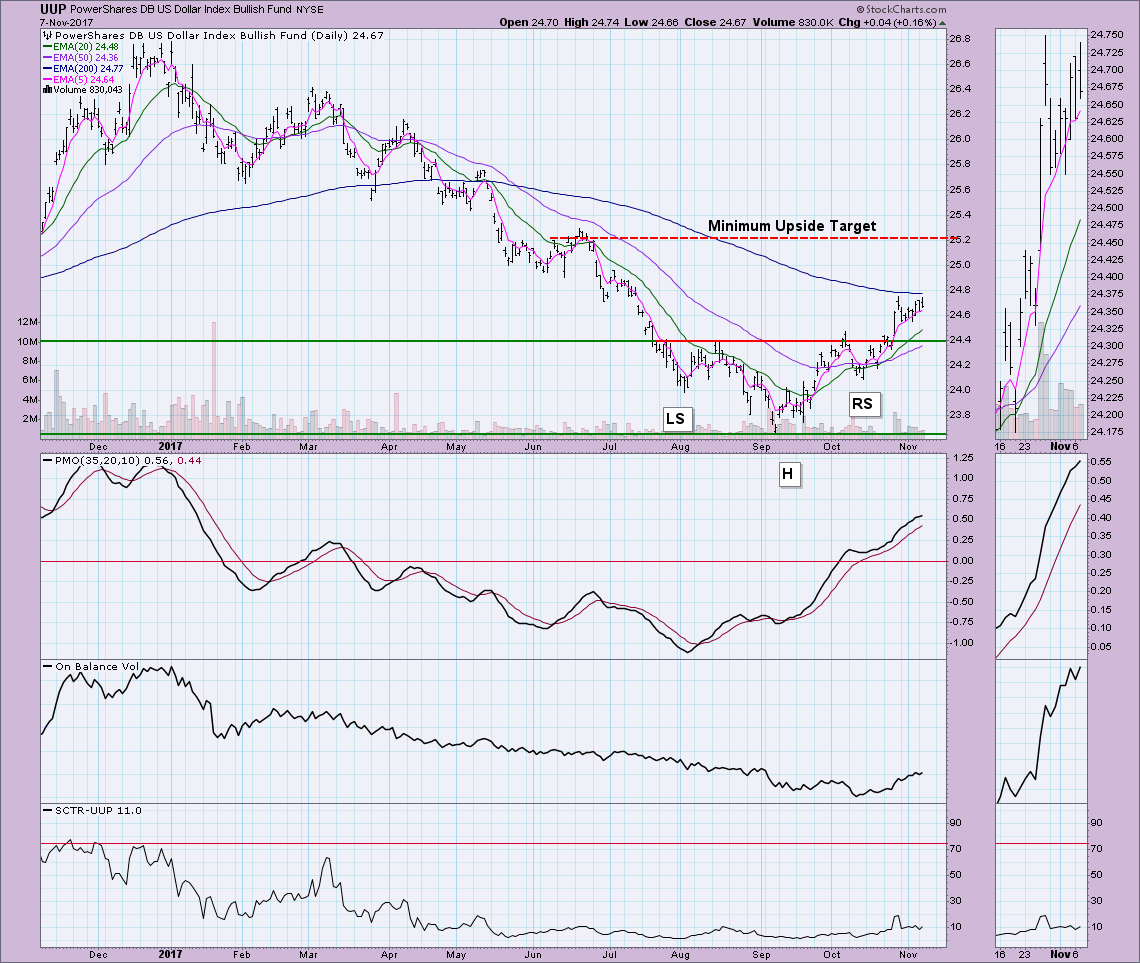 I have been waiting for Gold to breakdown and test the 1200 mark. Support is stout and Gold seems determined to hold on to the 1265 support line. We still aren't seeing the kind of discounts that would prepare Gold for another run up. The PMO is trying to rise and post a BUY signal. We're seeing a steady rise in the SCTR. I remain bearish on Gold, but if we get a solid PMO bottom and positive crossover, I'll likely switch sides. 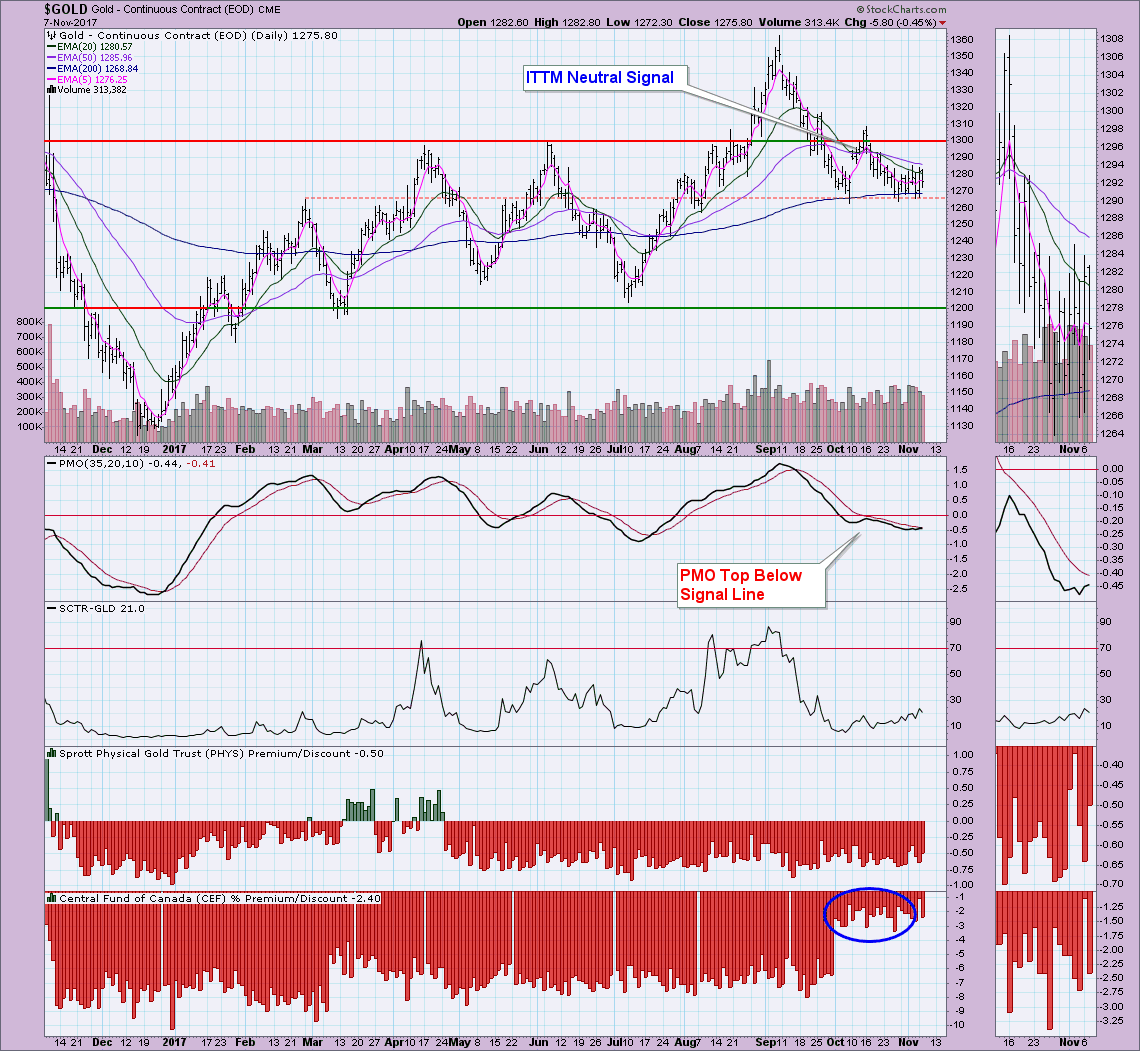 If you haven't watched today's MarketWatchers LIVE show and you are interested in information about Oil, Gas and the energy sector in general, you should. Greg Schnell covered this subject quite nicely. It's very bullish on the energy sector and Oil. I posted a few of his charts in today's MWL Recap that you might want to take a look at. I think the only thing that could be considered a negative is that the PMO is getting very overbought. But how overbought is it? 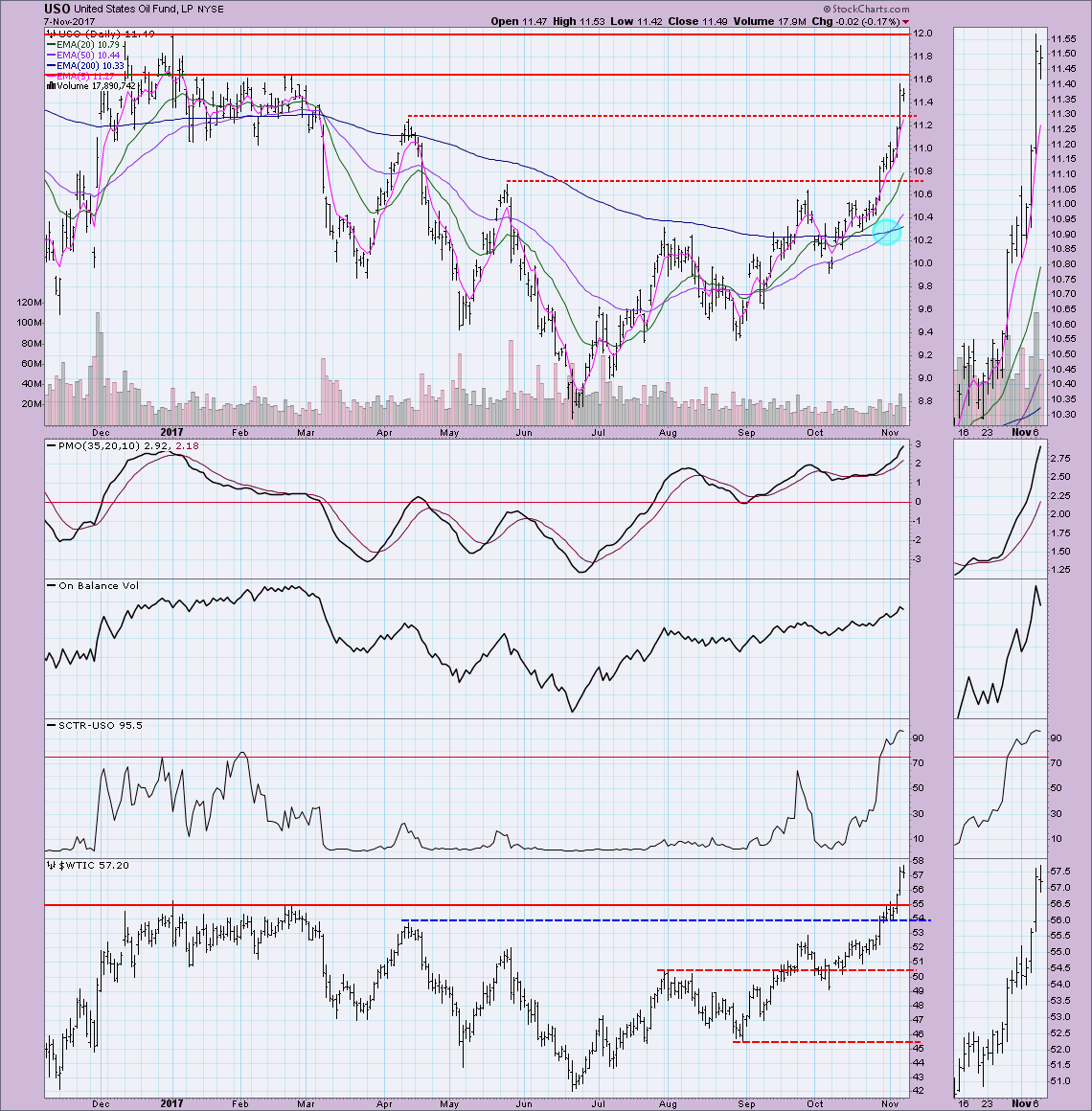 Here's a long-term version of the chart. Yes, it is overbought. However, we've seen it higher and we can also see that when it has had extreme price declines, the PMO was stretched well past the "normal" PMO range. The same could very well happen here. Oil has been depressed for some time, this quick rally was bound to push the PMO outside its range. So while it could be considered a negative, I'm not worried about it yet. 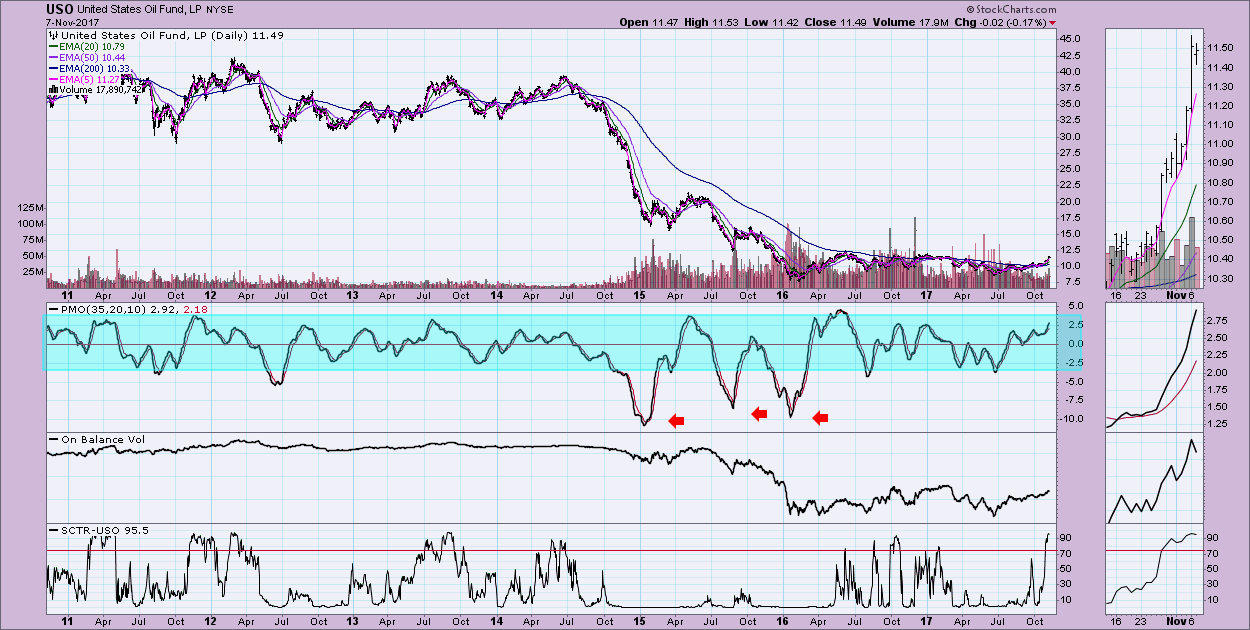 Bonds have also been enjoying a nice rally. I originally was looking at a head and shoulders with the October top forming a right shoulder. Well now I think you could make a case that we are building a right should now. Price it at resistance and a decline here could form a head and shoulders. It's too early to think about that pattern and the chart still looks very bullish with the PMO rising above the zero line, the SCTR improving greatly and OBV pointing straight up. 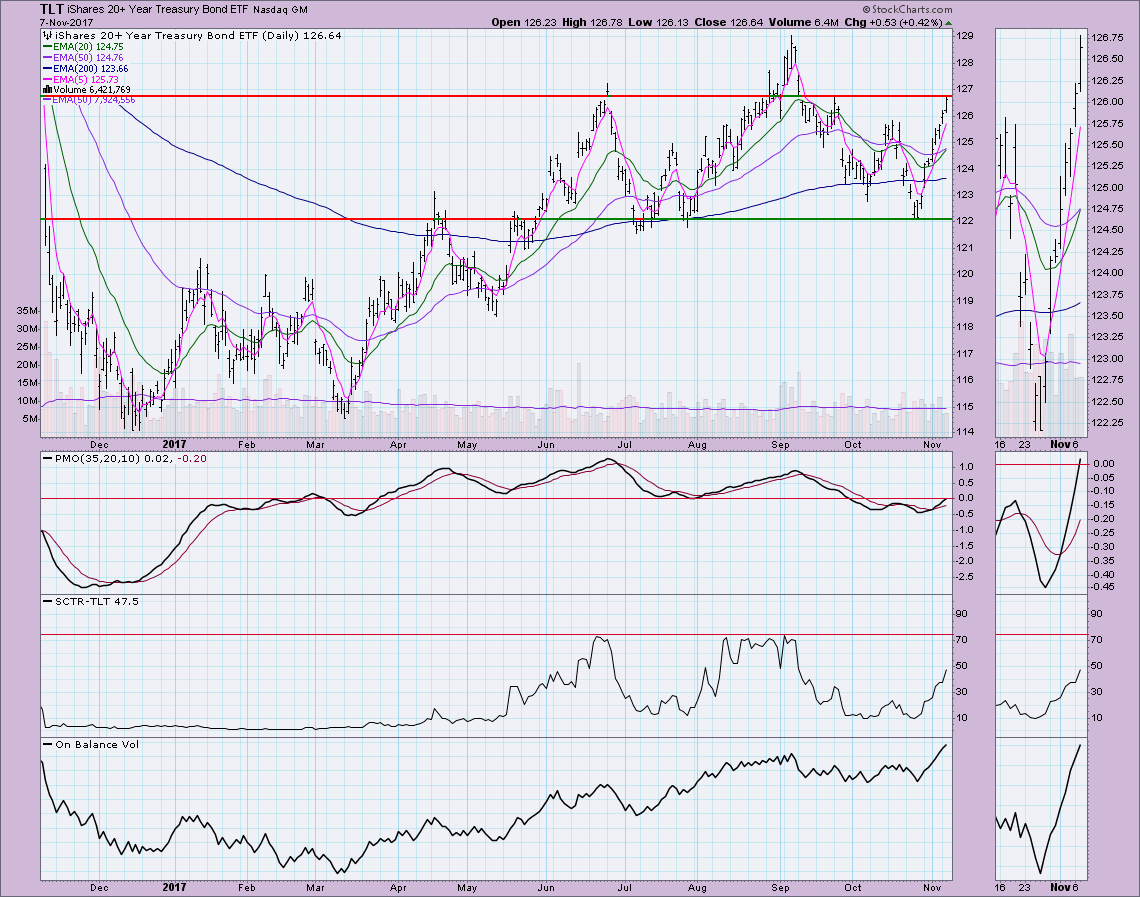