Thanks mostly to a pop on Tuesday the market once again moved to new, all-time highs. Typical of holiday trading volume was lower than average, except for Tuesday, which had a surge confirming the price advance. Positive market action on a holiday week was no surprise, considering the persistent strength of the current bull market. 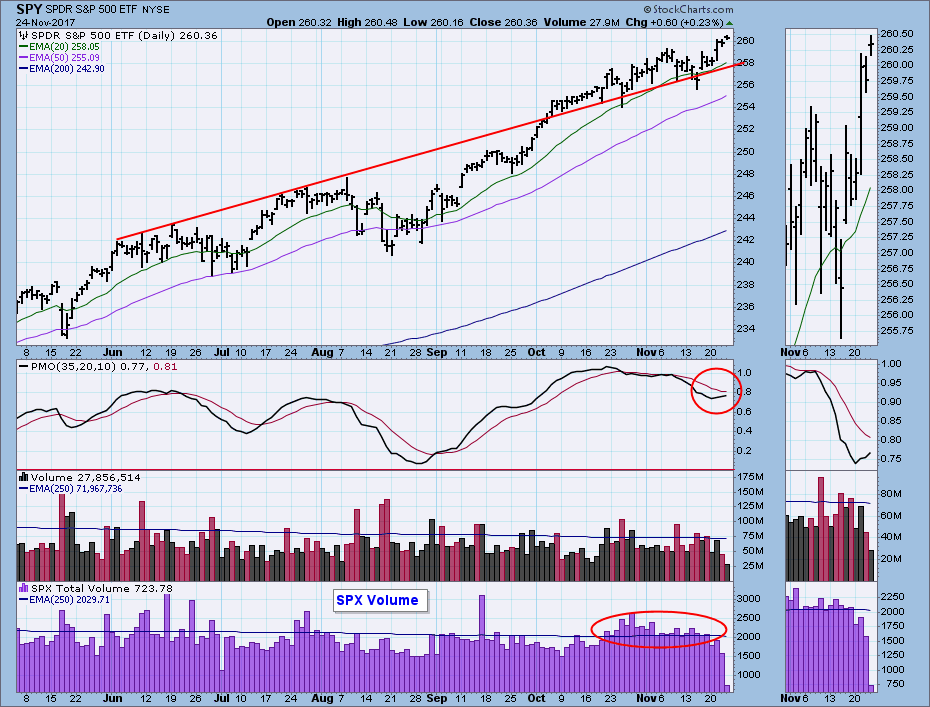 Daily Chart: The daily PMO has bottomed, but it is somewhat overbought. Nevertheless, there is plenty of room upward before it hits the top of the one-year PMO range. The high SPX volume we have been seeing (excepting this week) is probably distribution taking place, but that could continue for some time before prices finally start down (whenever that might be). 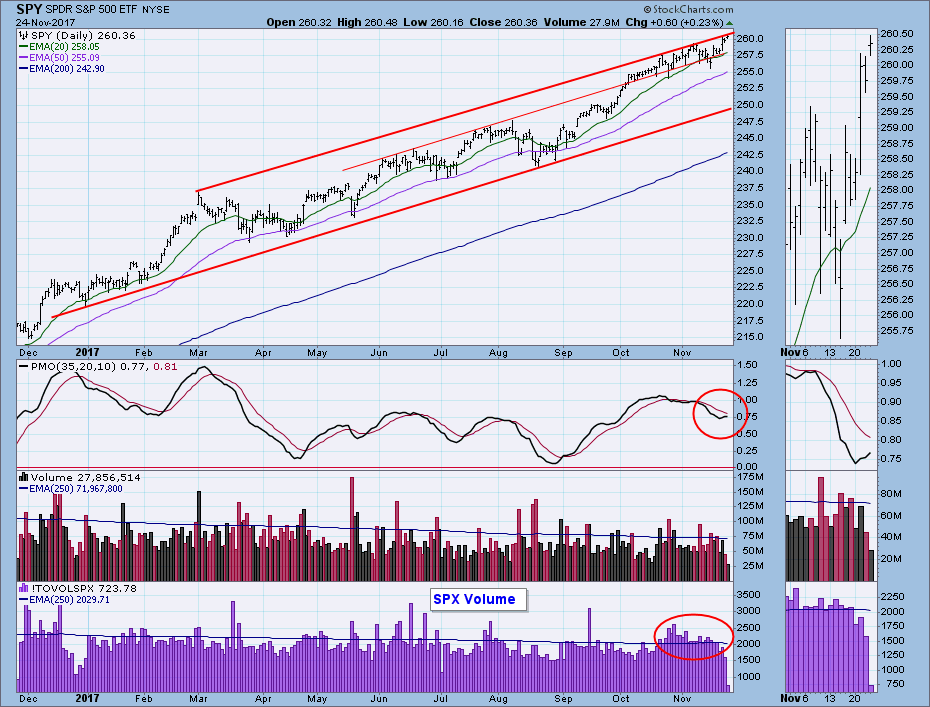 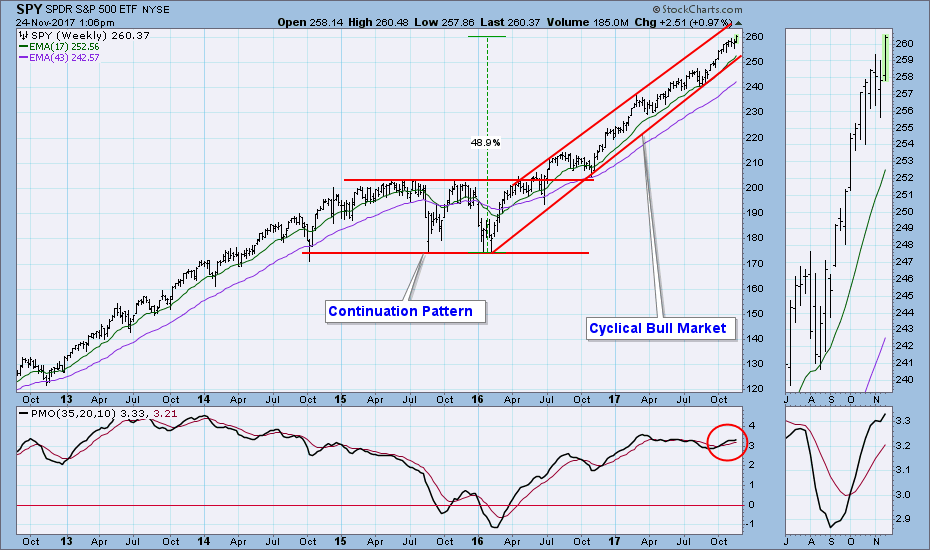 Short-Term Market Indicators: There is plenty of room on these indicators for a continued rally. 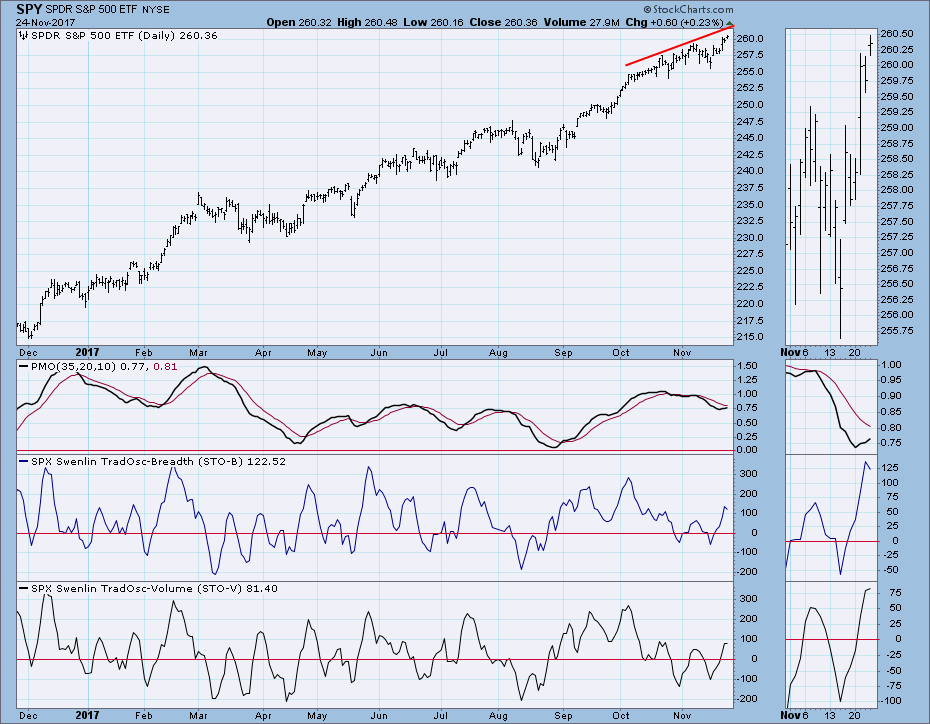 Intermediate-Term Market Indicators: A few weeks ago I highlighted price action following indicator tops. Of the five I chose to highlight, four were price declines and one (green circle) showed that a rally took place while the indicators moved back toward zero. When the indicators bottomed, the price advance accelerated. Currently, we can observe that price continued to advance, while the indicators corrected, and the indicators the indicators have just bottomed in the neutral zone. This is a very positive setup. 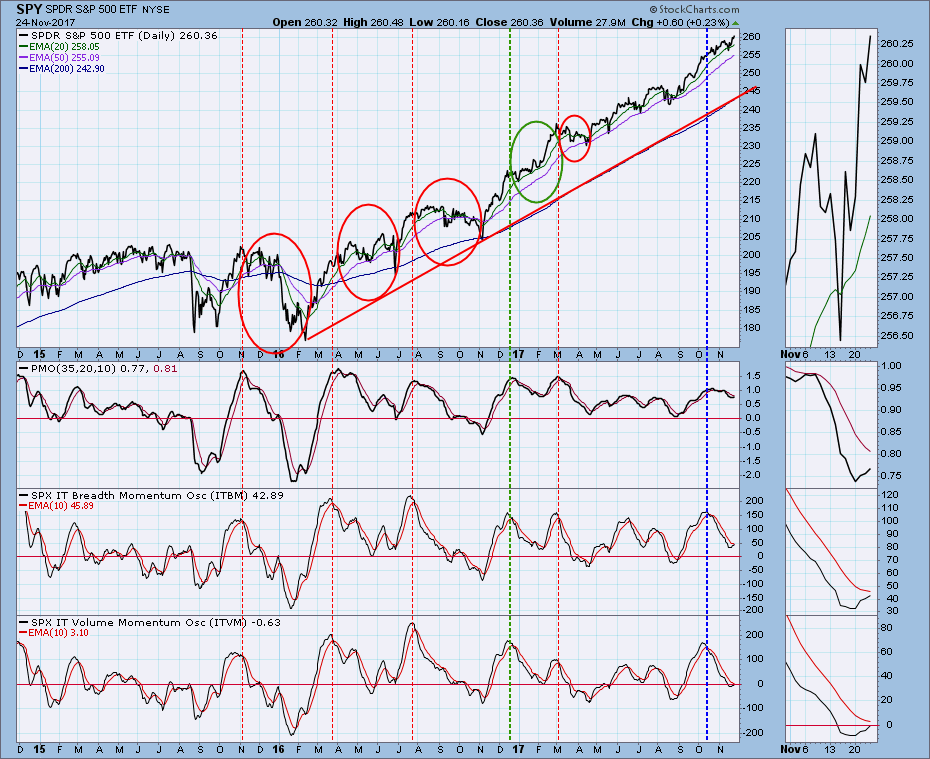 Conclusion: Last week I said: "The weekly PMO top concerns me, but generally, the market still refuses to show weakness beyond a minor dip. The internals will accommodate a continued rally, and sentiment has too many people looking for a top. We are in the zone for a Santa Clause rally, and my best guess is that prices will continue higher until the end of the year." The only part of that that needs changing is that the weekly PMO has turned back up, so the picture has improved in that regard. I'll be looking for the rally to continue, and maybe accelerate, next week.

Daily Chart: While UUP price action last week could have been interpreted as a pullback prior to another attempt at a breakout, the assault on overhead resistance earlier this month failed totally this week, as price initiated another down leg from the November top. Unless price reverses upward, I expect that an IT Trend Model SELL signal will be generated next week. 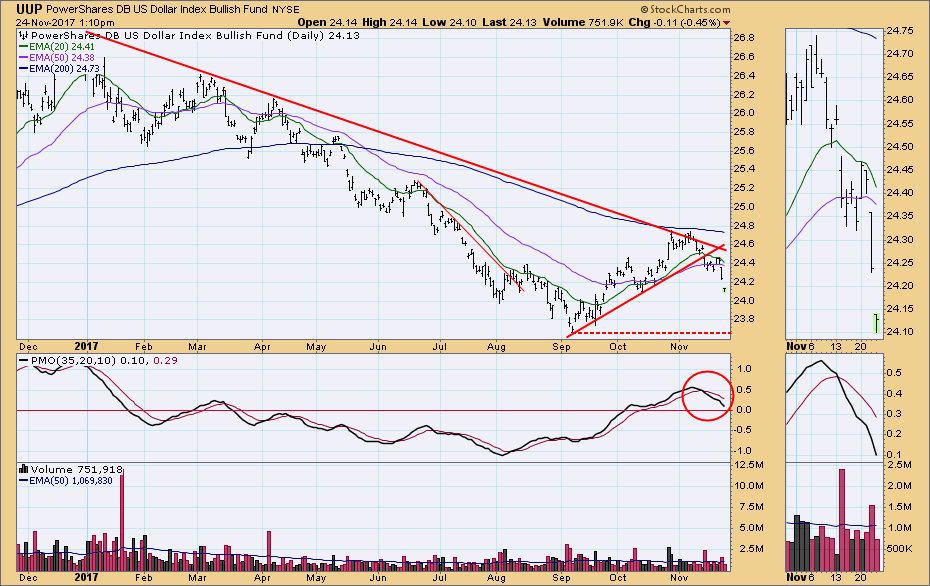 Weekly Chart: The UUP weekly PMO has topped, which implies that the coming retest of support may fail. 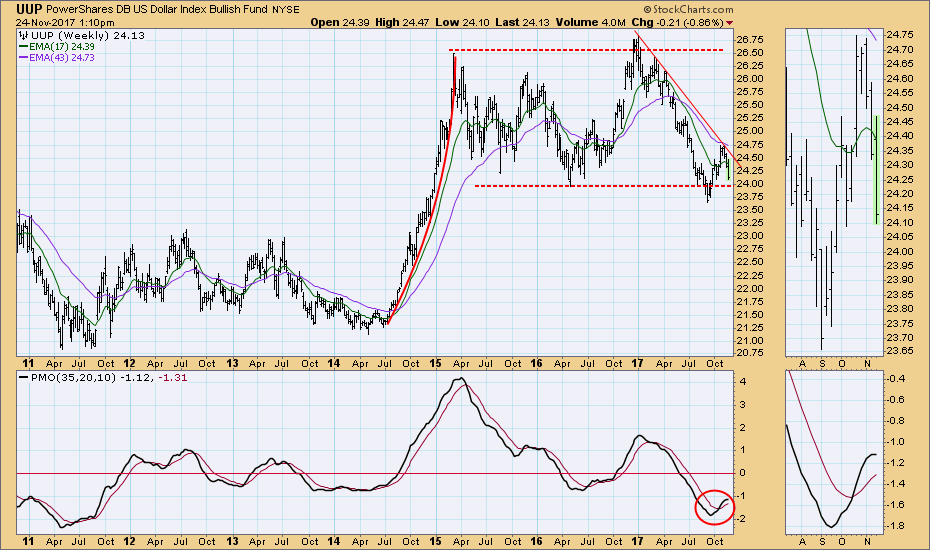 Daily Chart: In spite of the weakness displayed by the U.S. dollar (see above), gold continues to struggle. Instead of making a clean breakout above the declining tops line, it merely drifted through the line sideways. I am still showing the possibility of a double bottom, but, unless we see improved price action next week, I fear I will have to abandon that scenario. Sentiment remains bearish and offers no support. 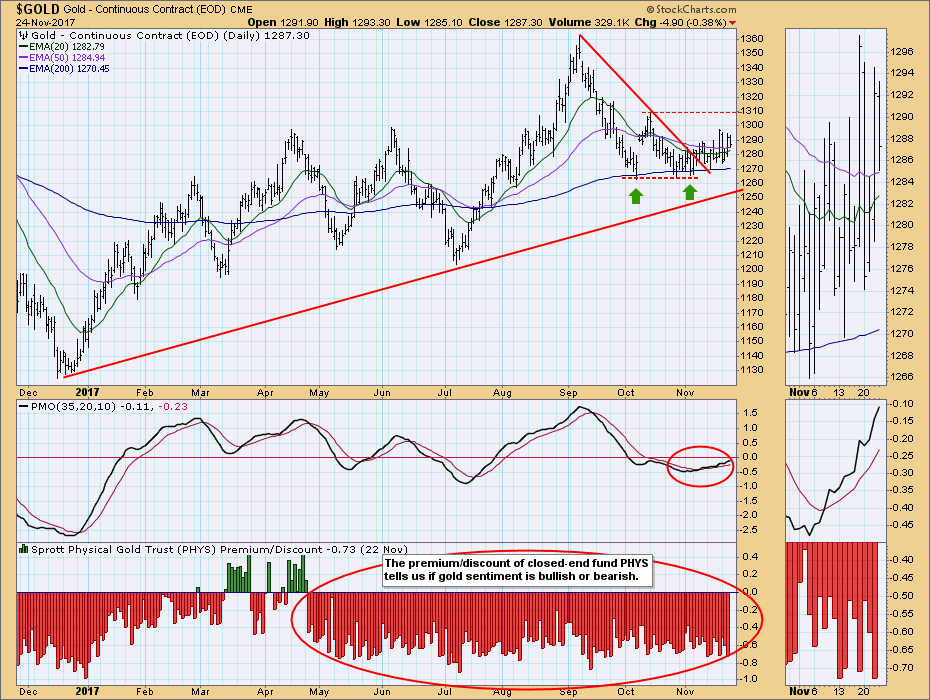 Weekly Chart: The weekly PMO topped this week, but it appears to be a result of gold's failure to advance, rather than a warning of a top. That said, PMO tops below the signal line encourage more caution. 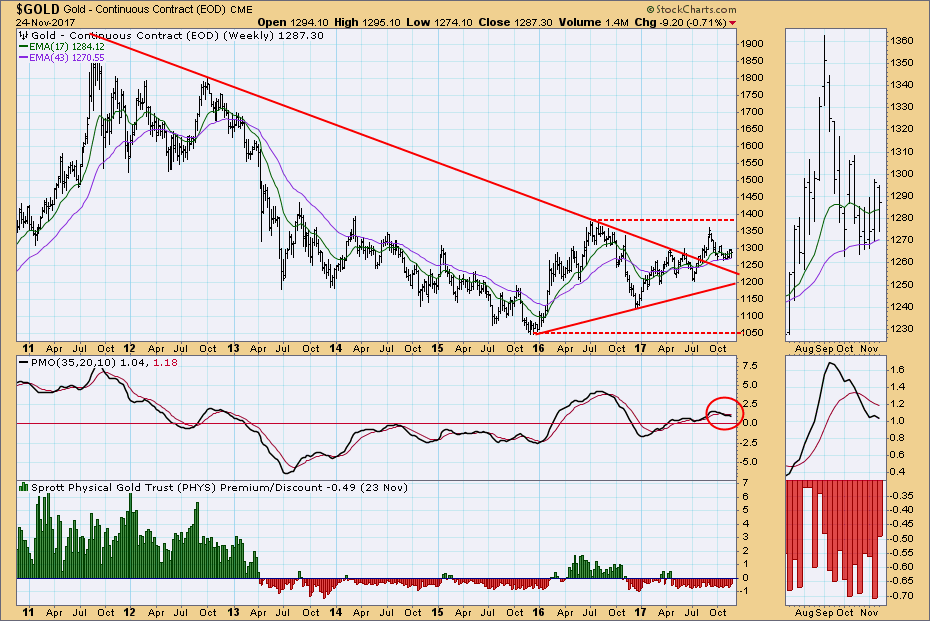 Daily Chart: USO maintains a parabolic advance off the June low, as evidenced by the series of rising trend lines with ever-increasing angles of attack. The daily PMO briefly dipped below the signal line, but quickly reversed that situation. The problem now is that the PMO is overbought. 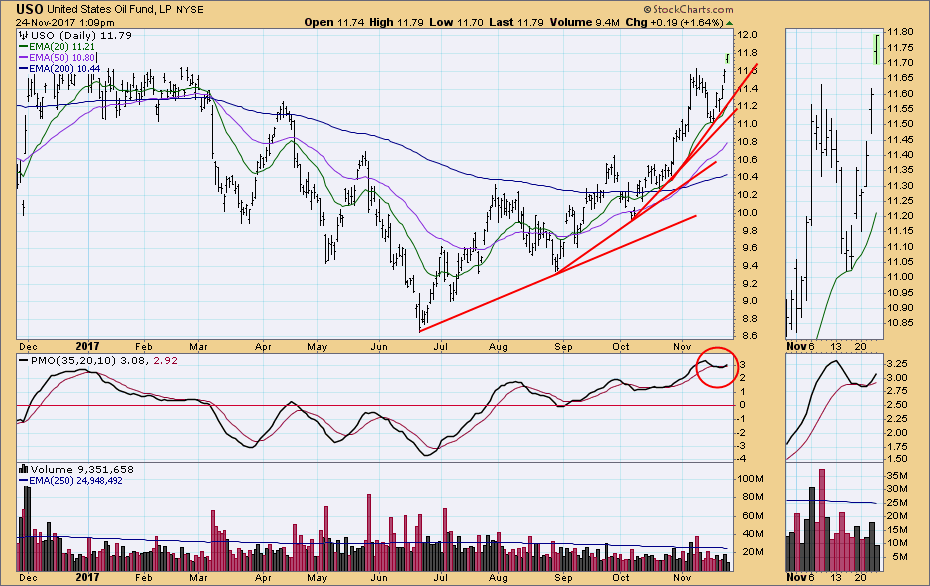 Weekly Chart: USO has almost reached top of the trading range, and the weekly PMO has reached a level that has proven to be overbought for the last nine years. 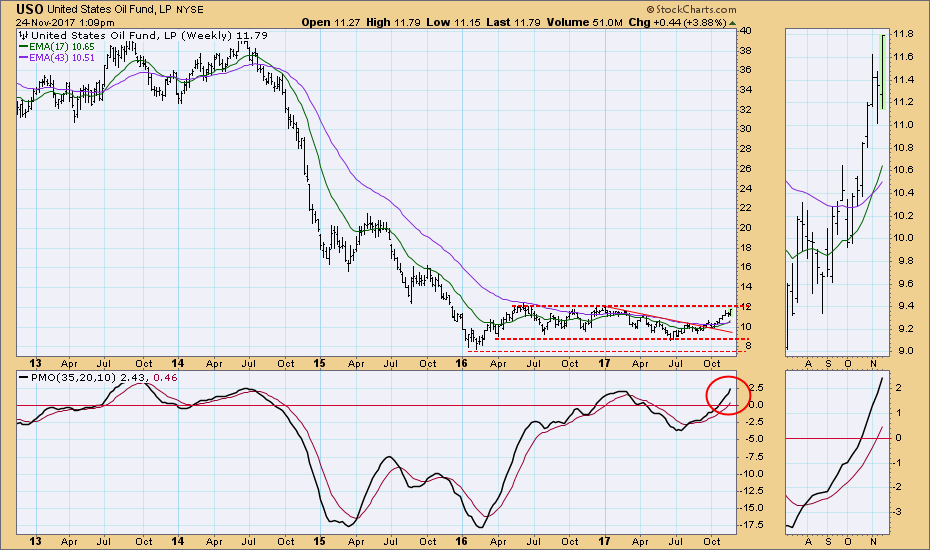 Daily Chart: The rally off last month's low has become a bit labored, and a rising wedge has developed. The technical expectation is that it will resolve downward. 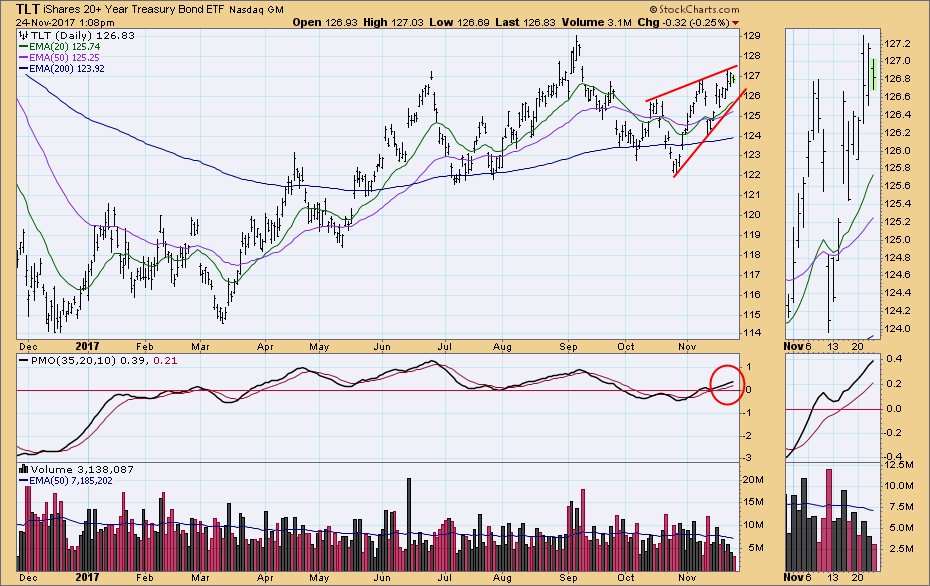 Weekly Chart: In spite of this week's advance, TLT still has a developing head and shoulders pattern; however, a new weekly PMO buy signal has registered some improvement in this time frame. 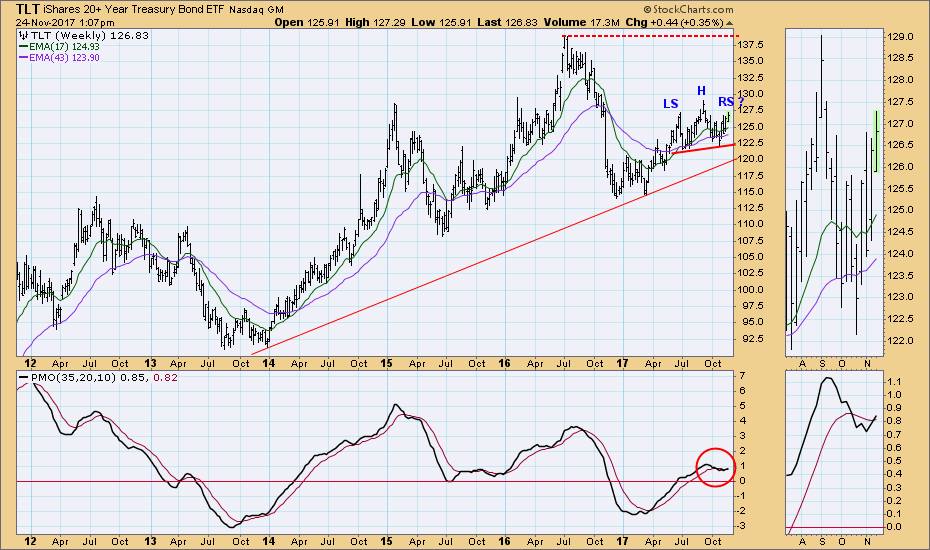