This week the National Association of Active Investment Managers (NAAIM) Exposure Index reached the highest reading since its inception in 2006. Rather than stay 100% invested, NAAIM members will raise or lower their fund's market exposure based upon their assumptions regarding future market action. The potential range of the Index is +200% to -200%, but historically it has ranged from slightly below zero to around +100%. This week it hit +109.4%, and as a sentiment indicator I'm wondering how we should interpret it. 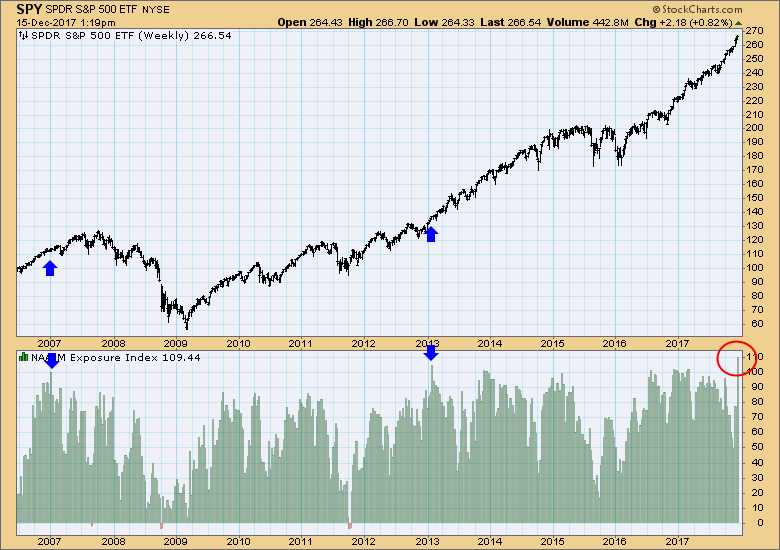 Looking at previous performance, there is no consistency of price action following high readings. We can dig around and find Index peaks that coincide with price tops, particularly in bear markets, but I think generally speaking high readings tend to be weeks/months early relative to intermediate-term market tops. That said, this peak makes me nervous. The market has been in a vertical ascent since the middle of last quarter, and this high Exposure Index reading could be a precursor to a long-overdue correction -- to happen sooner rather than later.

One thing to remember about sentiment polls, people in the group being polled are normally responding rationally to market action. Market goes up, they get bullish, and vice versa. Even at extremes, they are not always wrong.

Daily Chart: Another whacky week with a short-term top on Wednesday followed by new, all-time highs on Friday. Higher than normal volume on Friday can be attributed to options expiration. There may also be a climax component in there, but there is no way to tell. (See our discussion of Climactic Indicators below.) The rising trend line drawn from the November low is quite steep, and a rising wedge has been formed. As usual, my expectation is that the wedge will resolve downward. 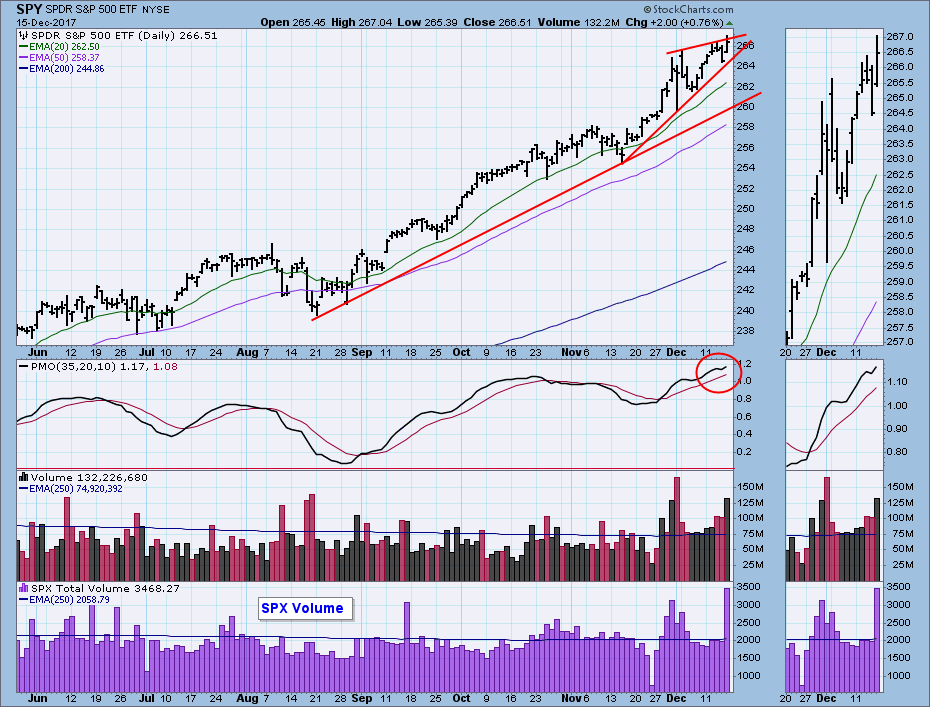 Weekly Chart: Price remains at the top of the long-term rising trend channel. The market may hug that line through the end of the year. The weekly PMO is overbought and rising. 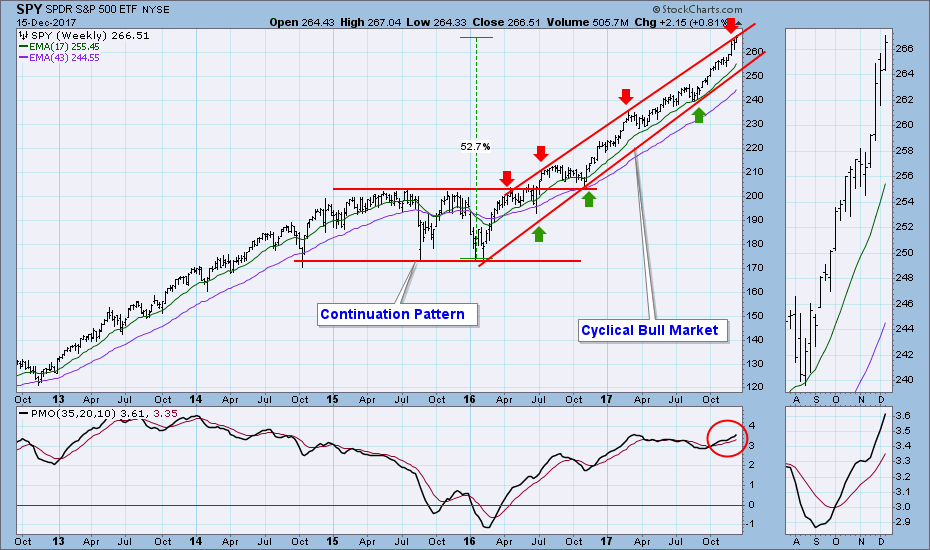 Climactic Market Indicators: This chart is predicting some short-term turbulence. New Highs climaxed at a pretty high number at the end of last month. In comparison, as price moved to record highs this week, New Highs contracted significantly. This means that fewer stocks were participating in that record push -- a negative divergence. Net breadth and volume climaxed up on Friday. 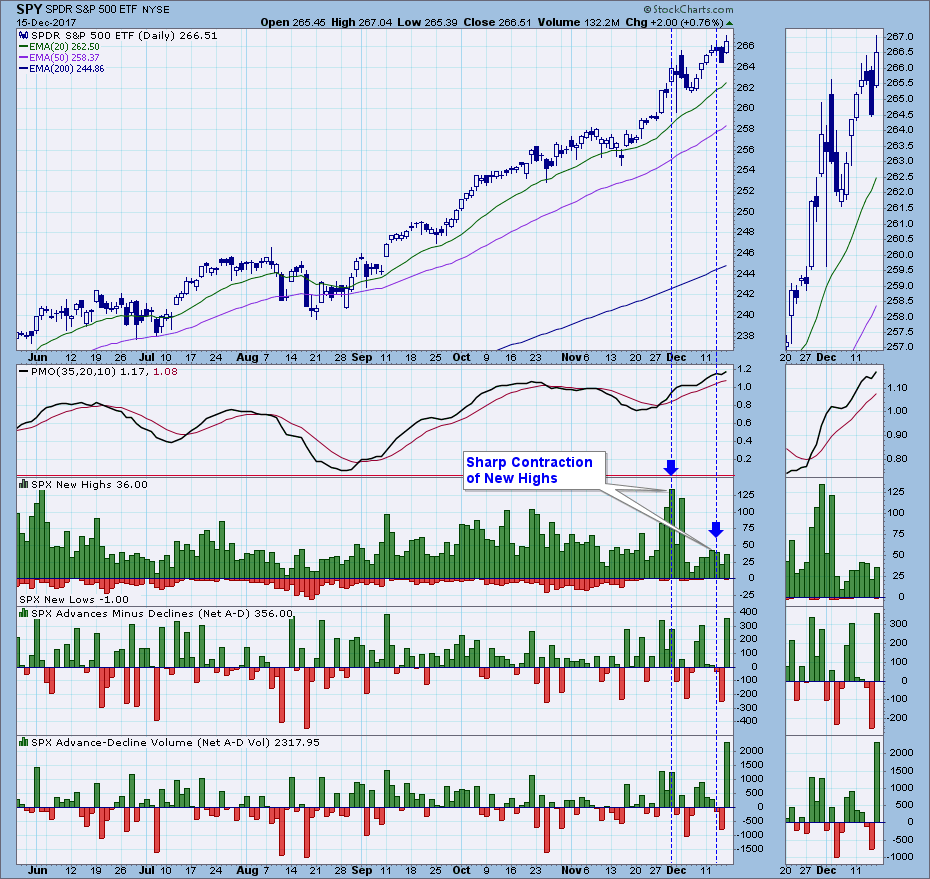 Short-Term Market Indicators: Negative divergences stand out on this chart. 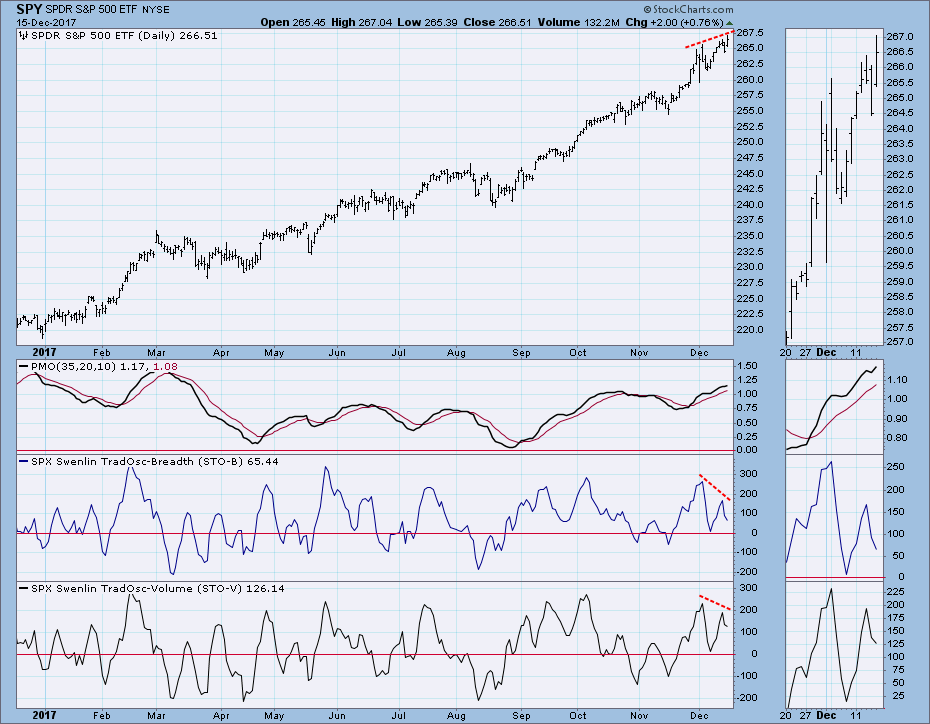 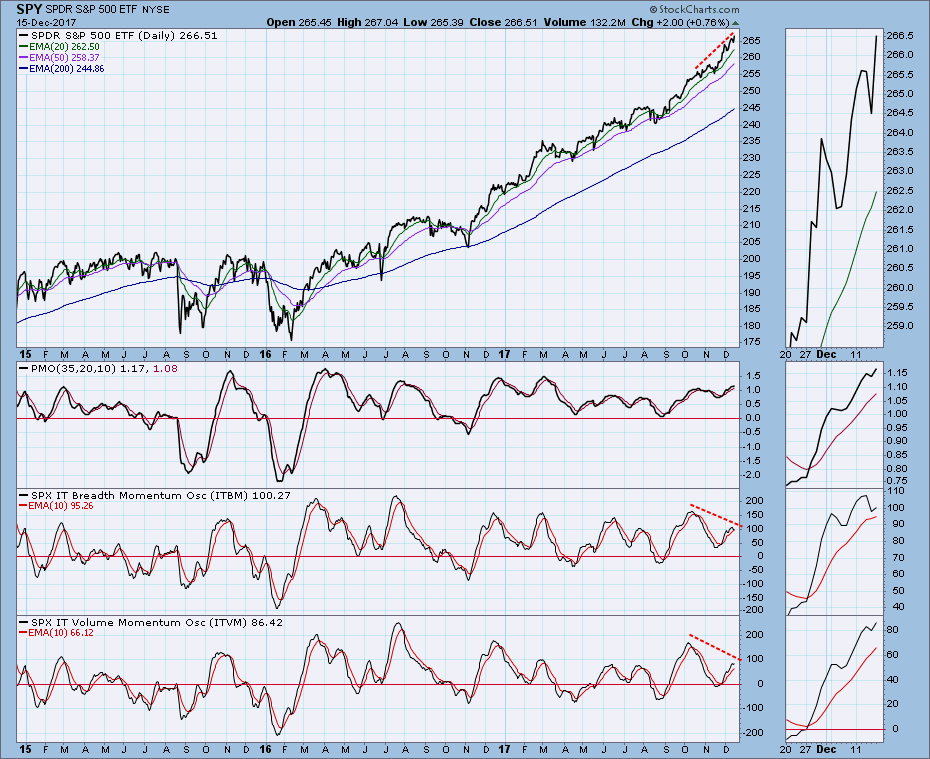 Conclusion: There are two significant issues this week: (1) SPY has hit overhead resistance on the weekly chart, and (2) the contraction of New Highs discussed above on the Climactic Indicators chart. I think these issues will have only short-term impact at this point for the simple reason that the market just doesn't want to go down. We could run into some turbulence next week, but my expectation continues to be for the market to continue higher into the end of the year.

Daily Chart: This week UUP generated a new IT Trend Model BUY signal, when the 20EMA crossed up through the 50EMA, but price still hasn't overcome the resistance of the declining tops line. 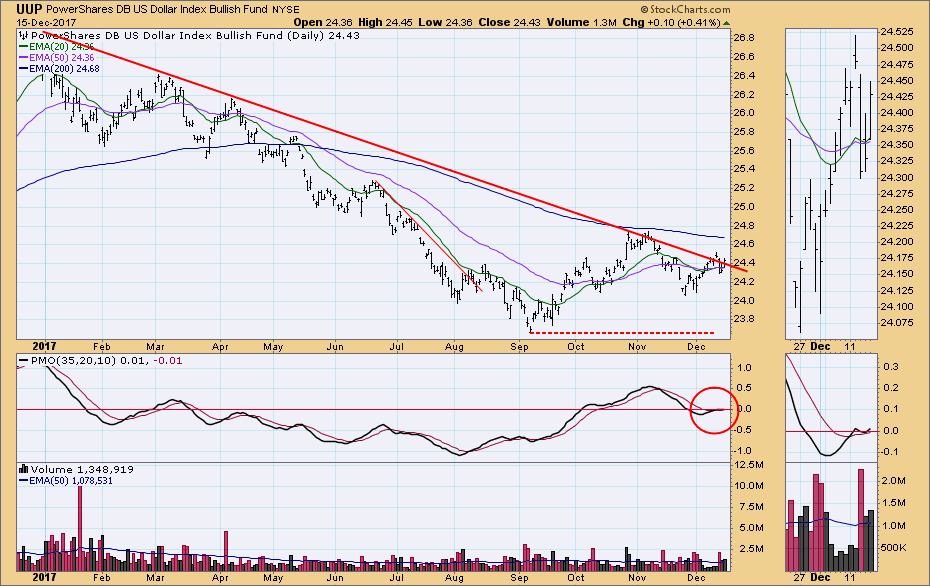 Weekly Chart: The bullish weekly PMO implies that UUP is going to break above the declining tops line. 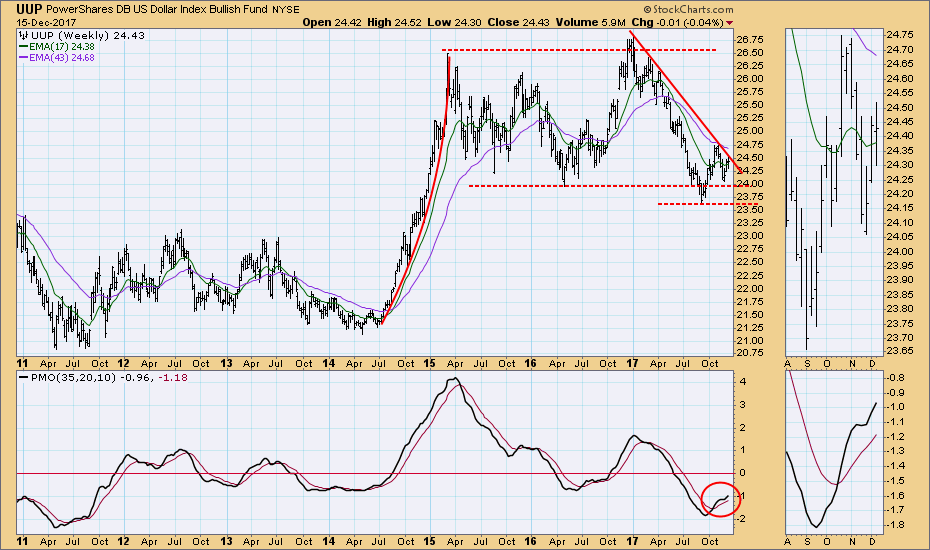 Daily Chart: Gold broke down from the one-year rising trend line last week, and this week price snapped back to that point of breakdown. The PMO is trying to bottom, but I don't think it is going to make it. 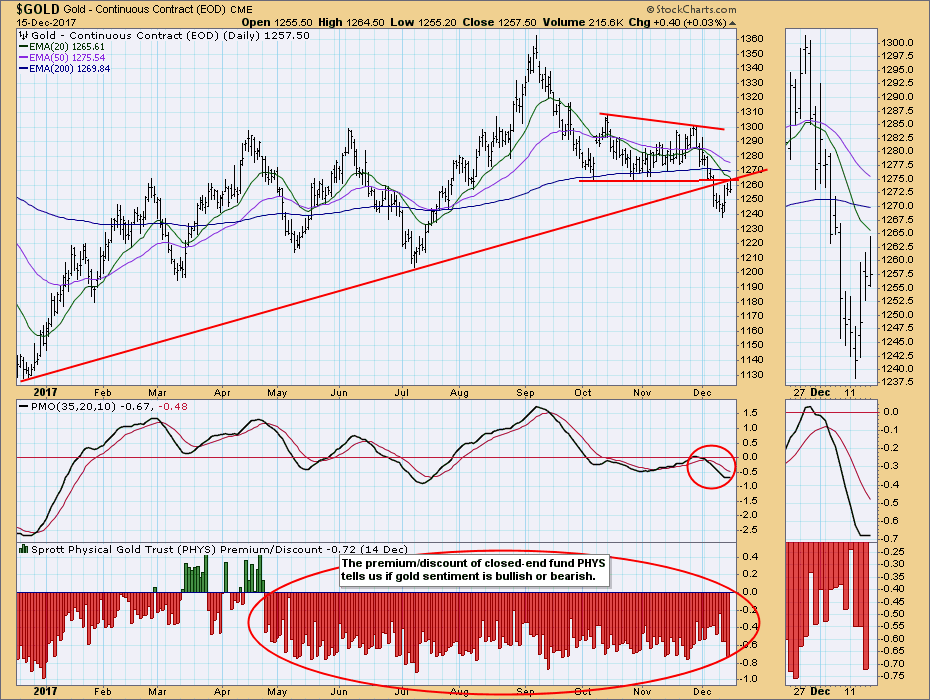 Weekly Chart: A rising trend line has been broken, but there is long-term support in the area of 1200. 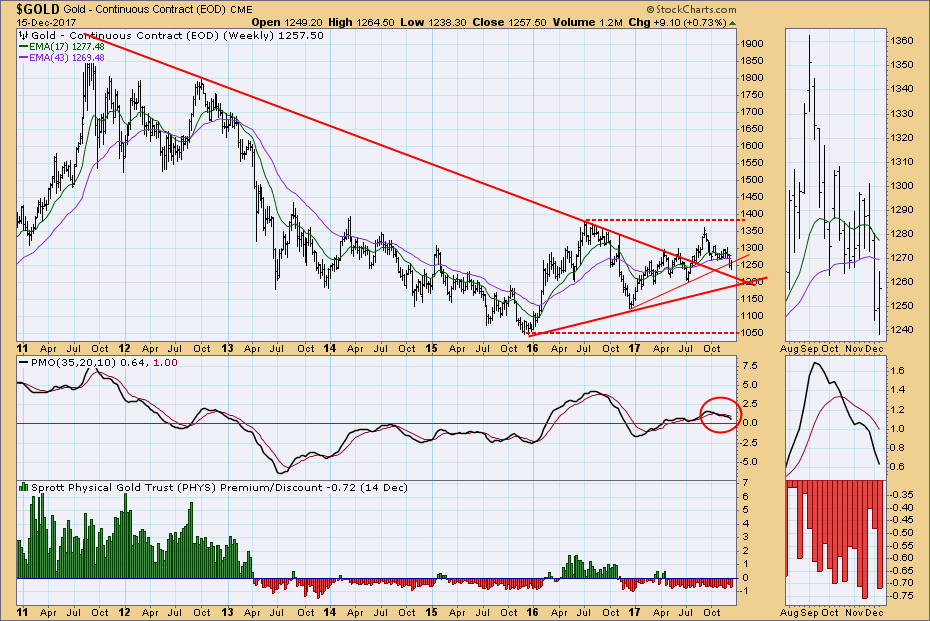 Daily Chart: A triangle has formed, and it may be a top or a continuation pattern. The daily PMO is falling from overbought levels. 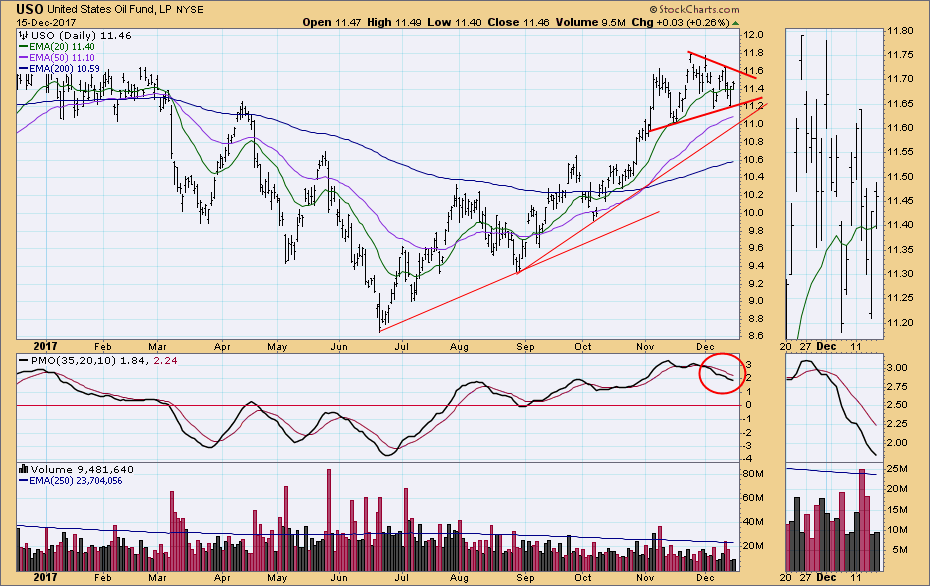 Weekly Chart: USO has been stalled just below the top of the 22-month trading channel, and the daily PMO is overbought and decelerating. My impression is that a top is forming. 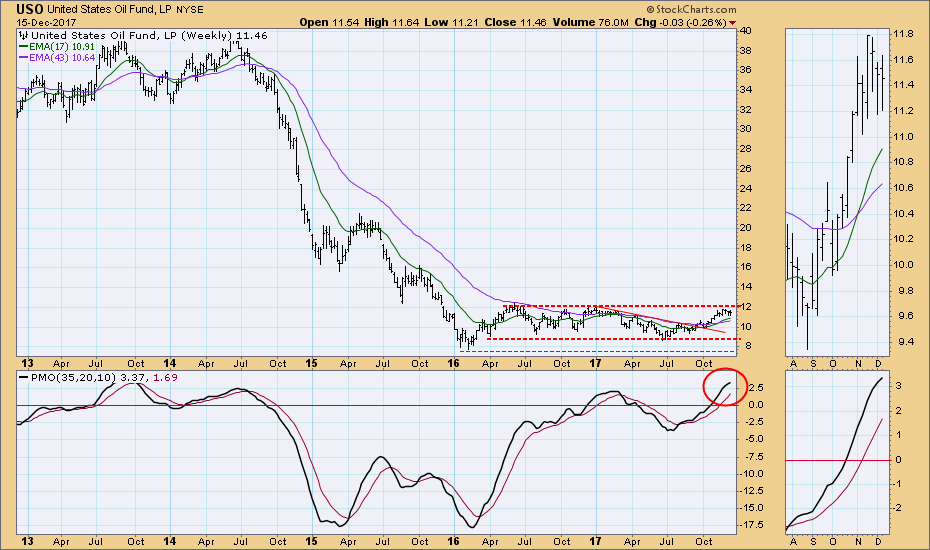 Daily Chart: Price is reaching combined overhead resistance from the rising tops line and horizontal resistance drawn from the September top. The daily PMO is above the signal line and rising, but it is a very shallow angle of ascent. 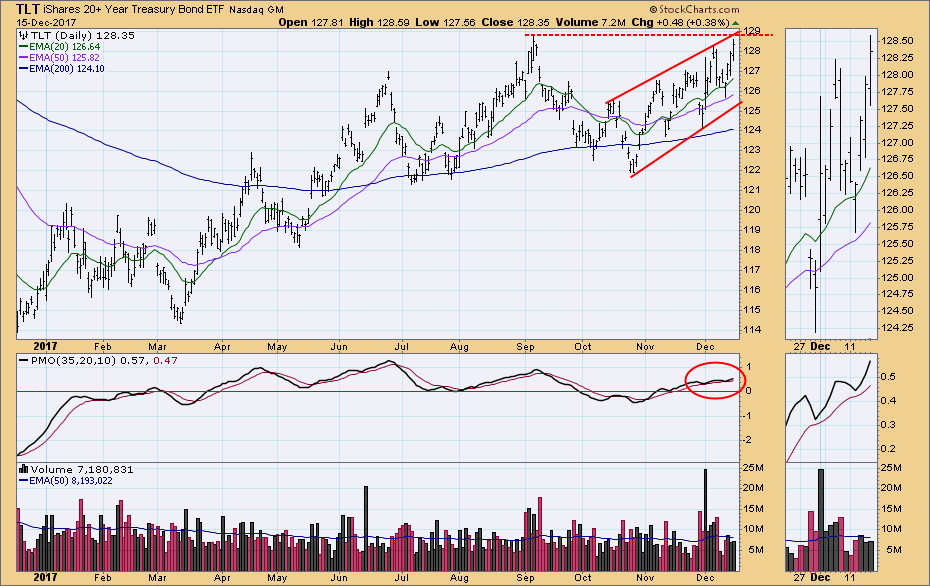 Weekly Chart: I have been monitoring a possible head and shoulders pattern across the last three tops of this year, but I am giving up on it -- the right shoulder has gotten a little too high. 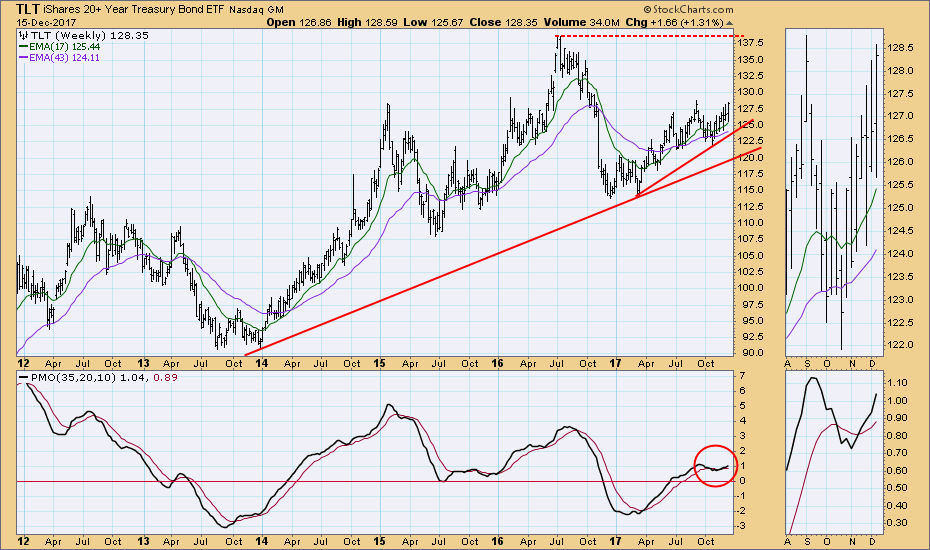