Below you'll find the latest DP Scoreboards. I've included a Sector Scoreboard that Carl and I will keep updated for analysis of sector rotation. The NDX is the only Scoreboard index holding its own. I don't think the NDX is out of the woods (see my article from yesterday) especially when we are seeing such weakness among the others. 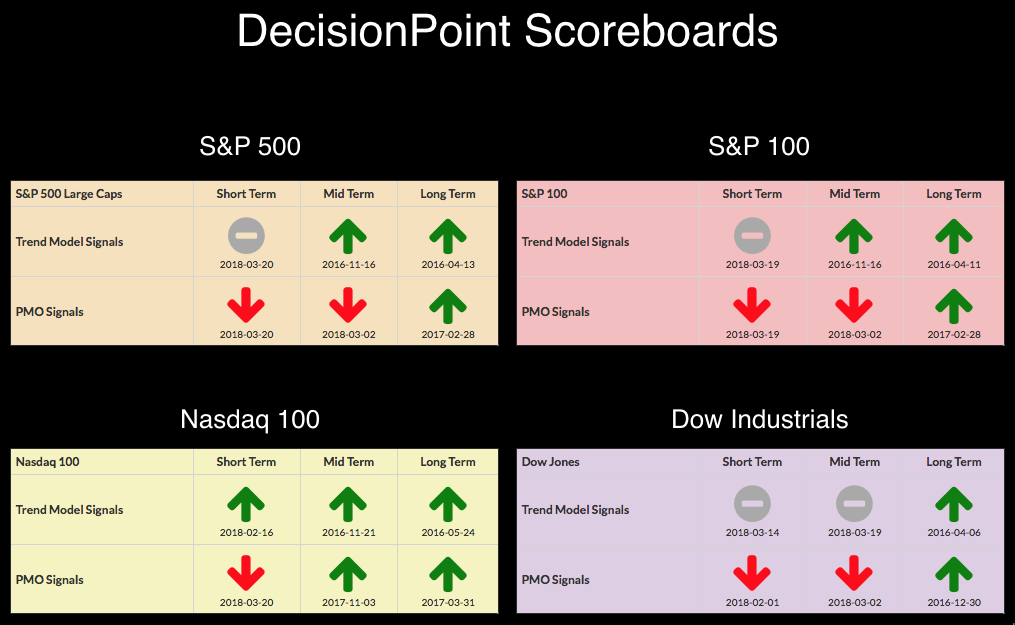 As far as sector rotation, we are still seeing the aggressive sectors leading and the defensive sectors sitting in Neutral with Real Estate and Utilities faring the worst. If we start to see BUY signals appearing on those sectors in the neutral position right now, that means that investors are heading for the next best thing to an exit by moving into those sectors that tend to do better in a bear market. 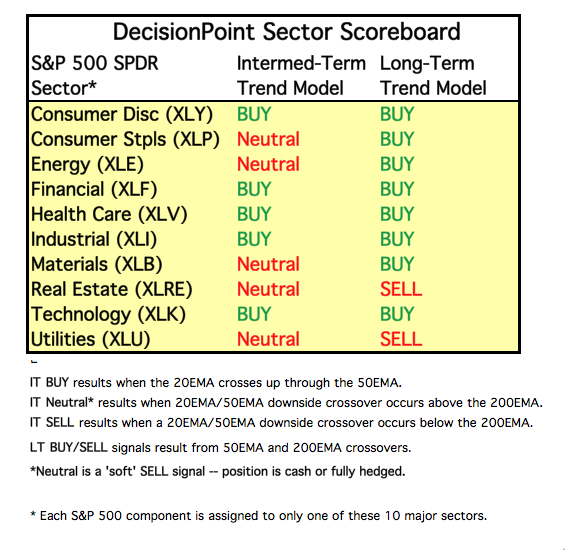 The SPY is holding on to very short-term support, but tomorrow will be the test. I suspect it will fail that test and head toward $268.50.

The daily chart suggests another test of the February low. I admit to being somewhat 'faked out' by this month's low, seeing it has the final test, that led to a V-bottom, not a double-top. Since failing to reach all-time highs and failing to penetrate overhead resistance at the February top, a double-top has formed. You'll see the same formation on the Dow and OEX (see yesterday's article). You can see that if the confirmation line is broken on the double-top, the minimum downside target would take price down to test the February low after all. One positive is that the PMO is still trending up since its low at the February low. OBV however is not looking healthy.

We had climactic readings Tuesday which I pointed out in yesterday's article. I labeled it as a selling exhaustion and typically after that you'll see a bounce. We ended up with sideways movement and that isn't favorable. 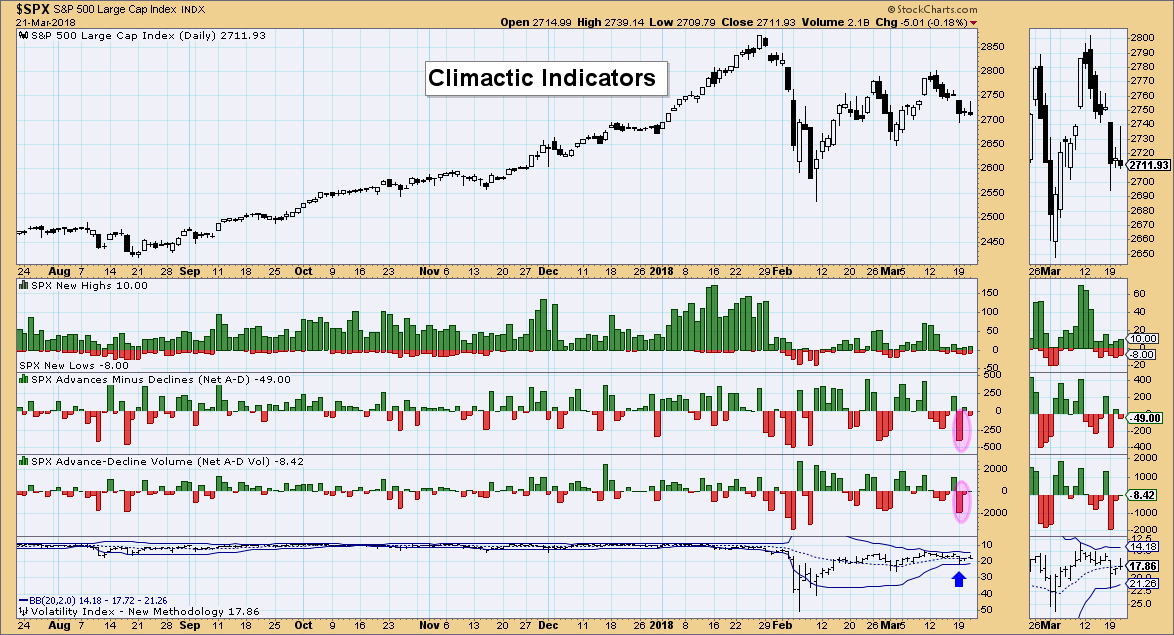 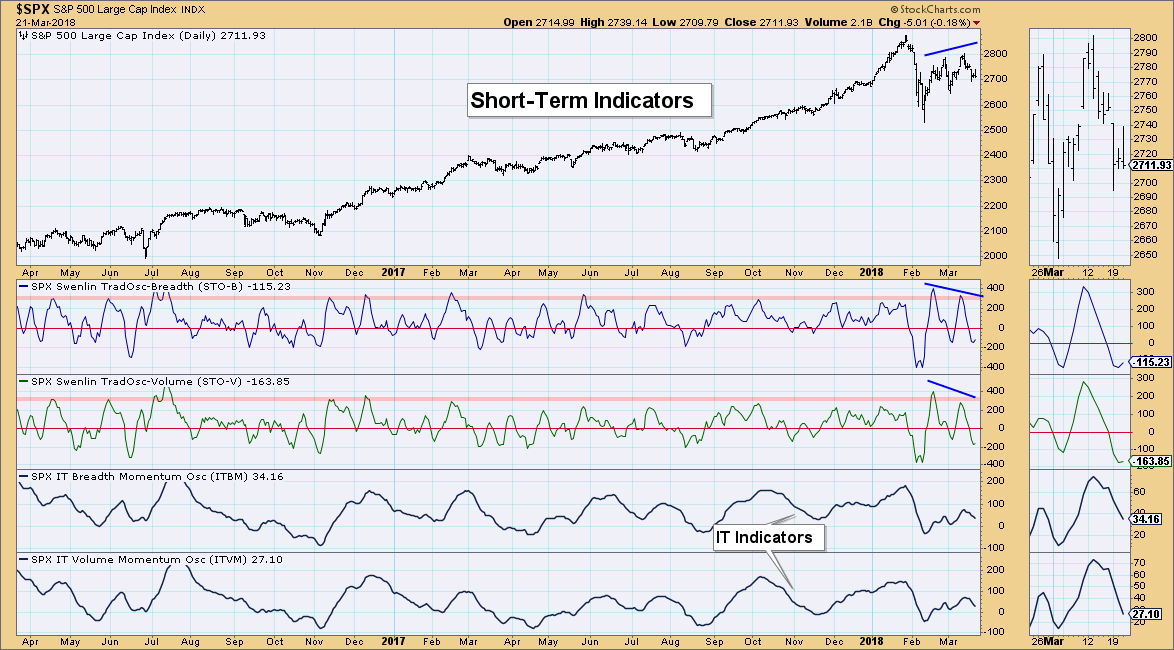 The ITBM and ITVM had negative crossovers this week but overall they are still trending higher. If readings drop further and break down the current rising trend, I'd be worried. 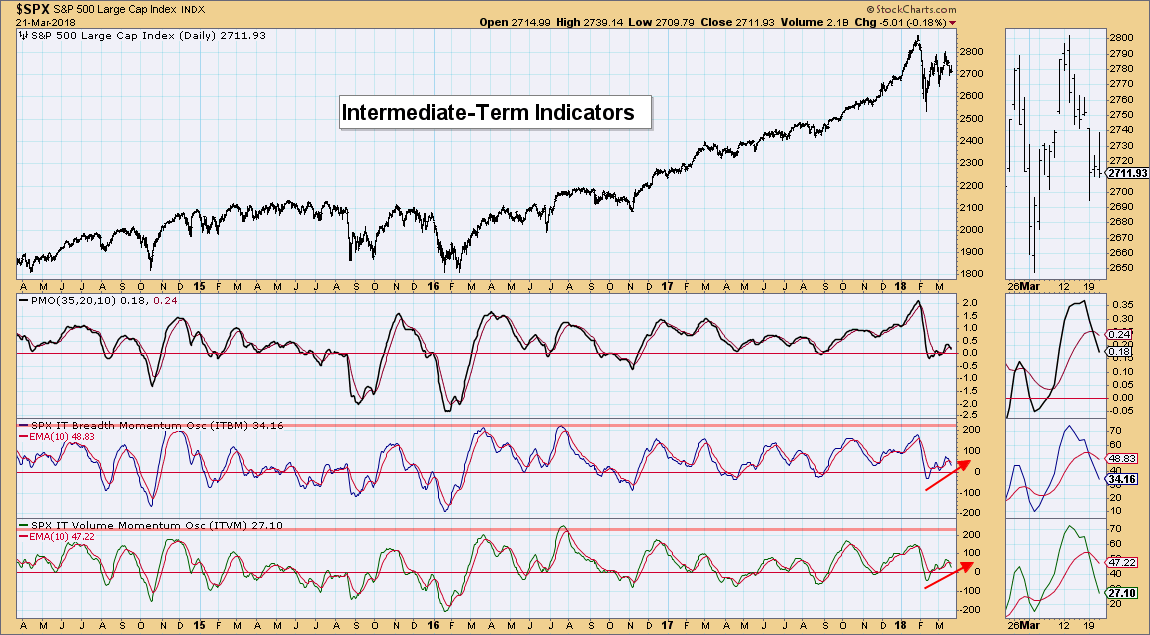 The bearish bias of the daily chart as well as the indicators is an attention flag. Proceed with caution.

I continue to wait patiently for a breakout on the Dollar. There is at least a short-term rising trend. Normally when I see the PMO rising so strongly from oversold territory, I'm happy. However, in this case, it has risen and price hasn't really gone along for the ride. So while momentum may be positive, price isn't reacting as it should. I'm still looking for a breakout, it just may not be an exciting breakout. Instead we could see more meandering in this gently sloping rising trend channel. The failed double-bottom from January/February shouldn't have been a surprise due to the LT Trend Model SELL signal, but the set-up was very good. More proof that a long-term bearish bias can thwart bullish chart patterns. 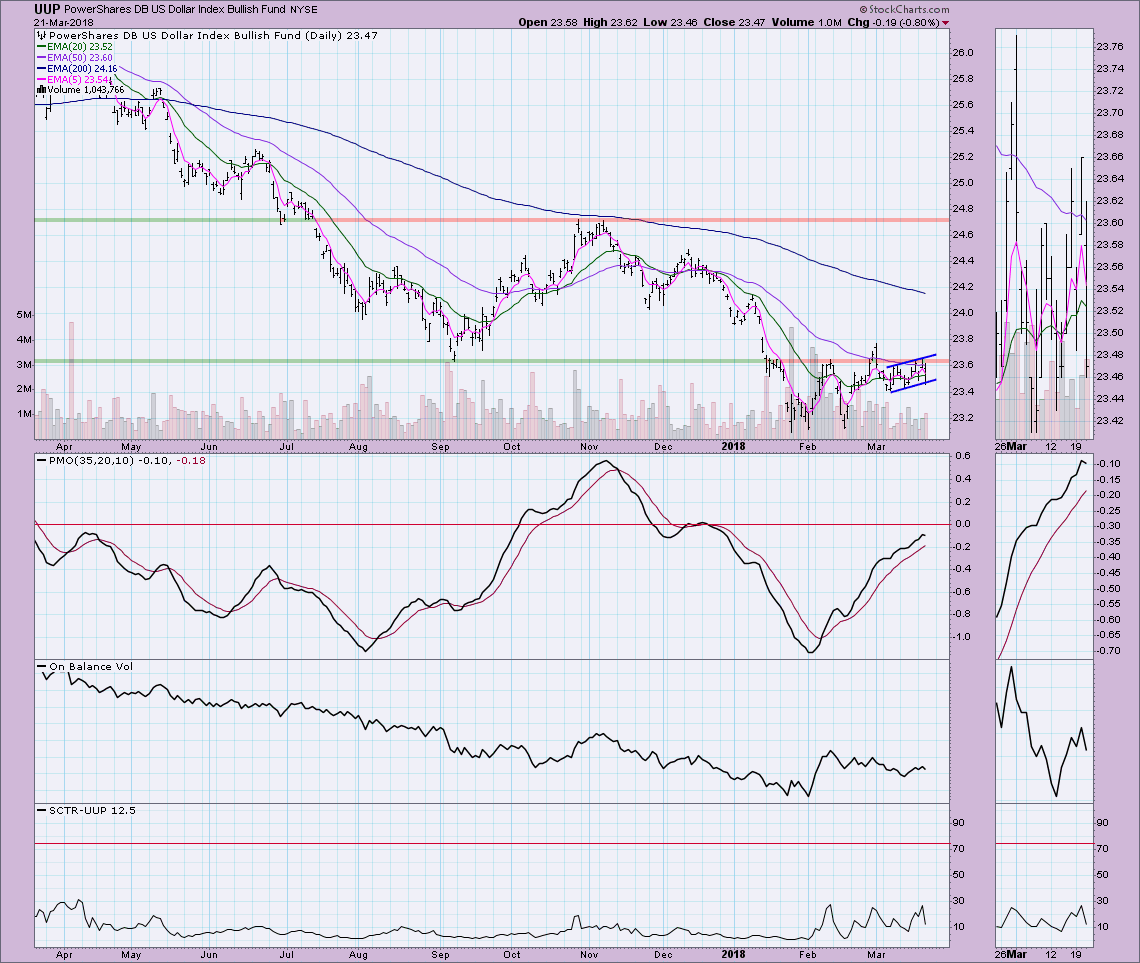 With the Dollar failing to breakout, Gold has managed to hold above the confirmation line on the double-top. Today we saw a push above the declining trendline, but it still closed below. The 20-EMA is nearing a negative crossover the 50-EMA and that would give us an IT Trend Model Neutral signal. I'm still looking for a breakdown. 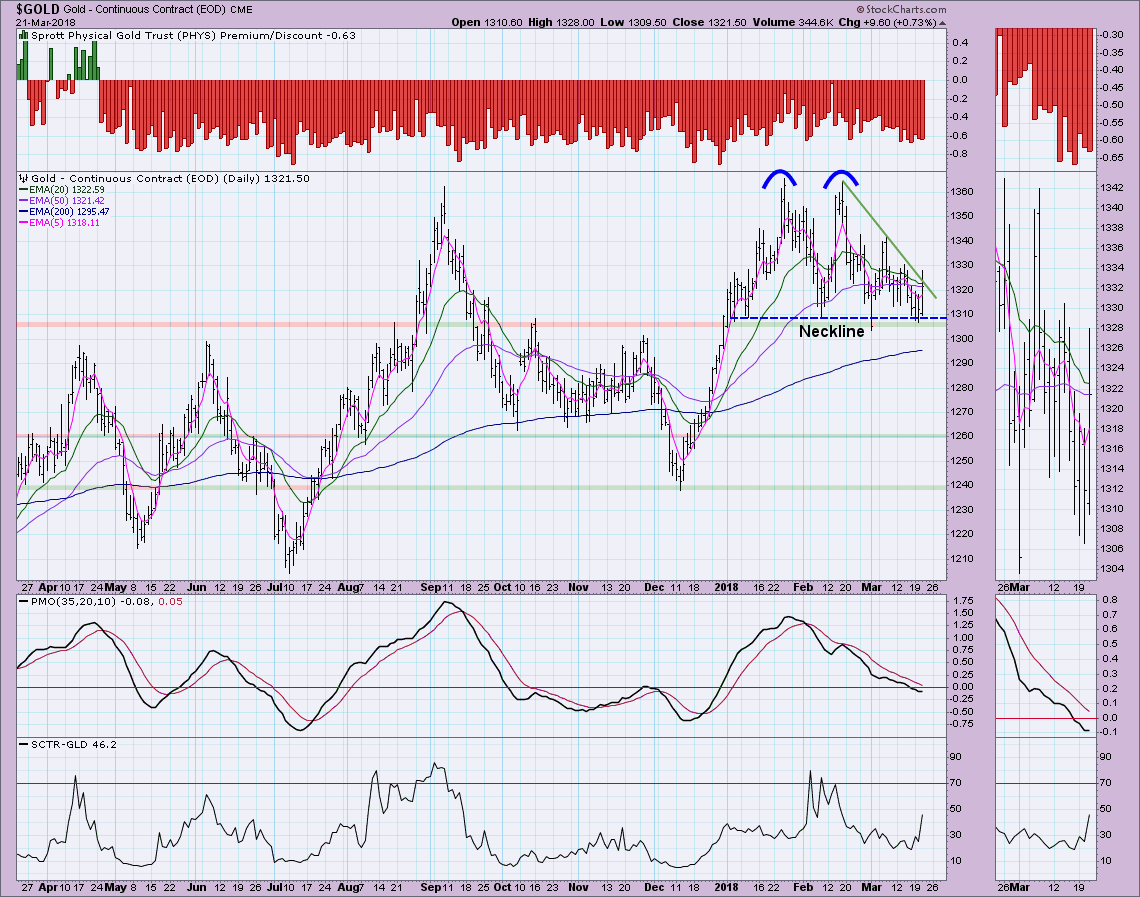 USO broke nicely outside the symmetrical triangle. It's a continuation pattern and it activated as expected. Overhead resistance isn't very far away, but given the PMO BUY signal and strong OBV and SCTR, I suspect that resistance will be broken easily. 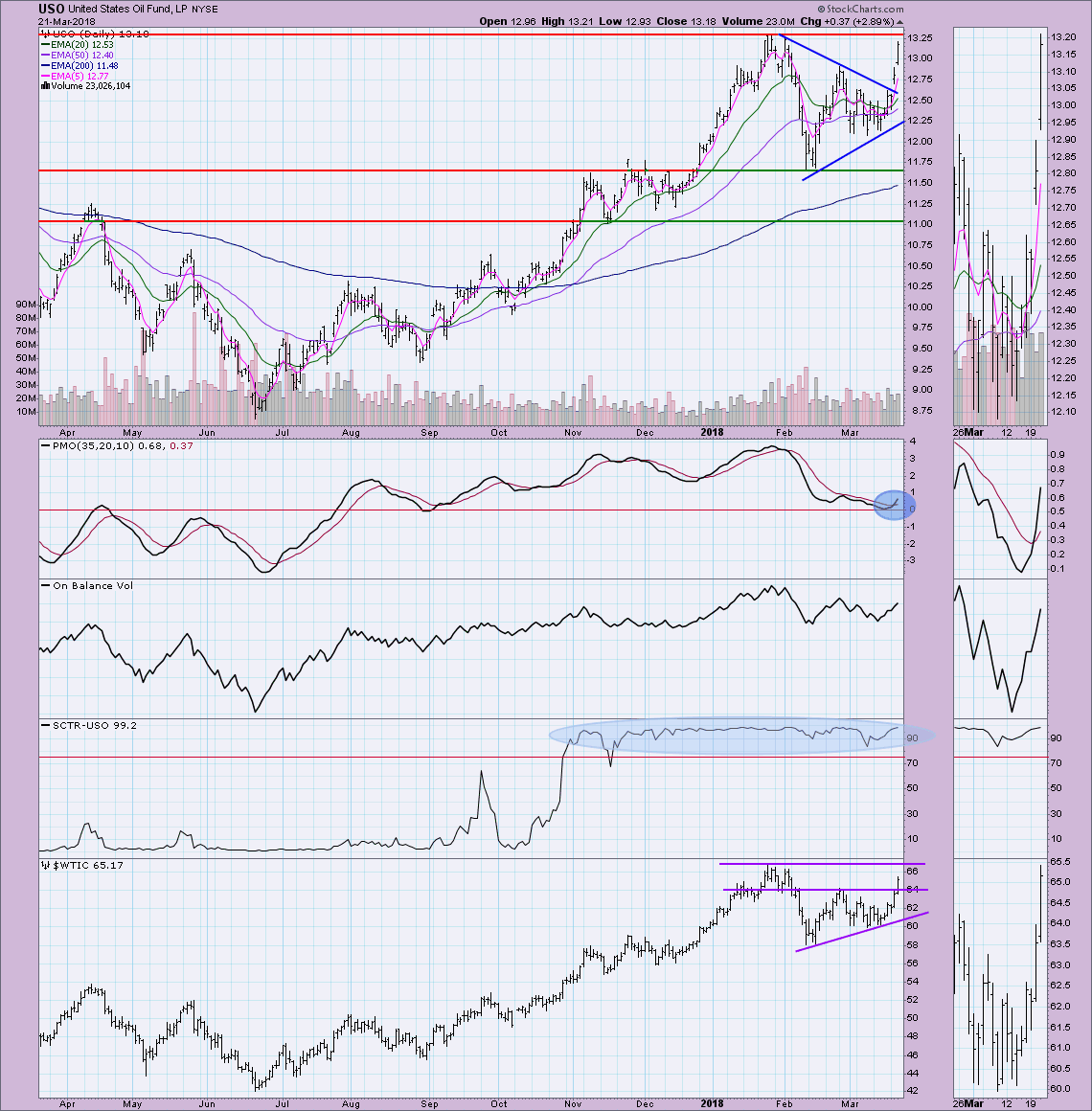 TLT has been rising nicely within a wide rising trend channel. Today price poked below but closed well above. The PMO is decelerating, but given the steep pullback from the previous high, it's hung in there and I find that positive. The FOMC raising rates today could affect Bonds in a negative way, but so far this chart doesn't look that bearish yet. 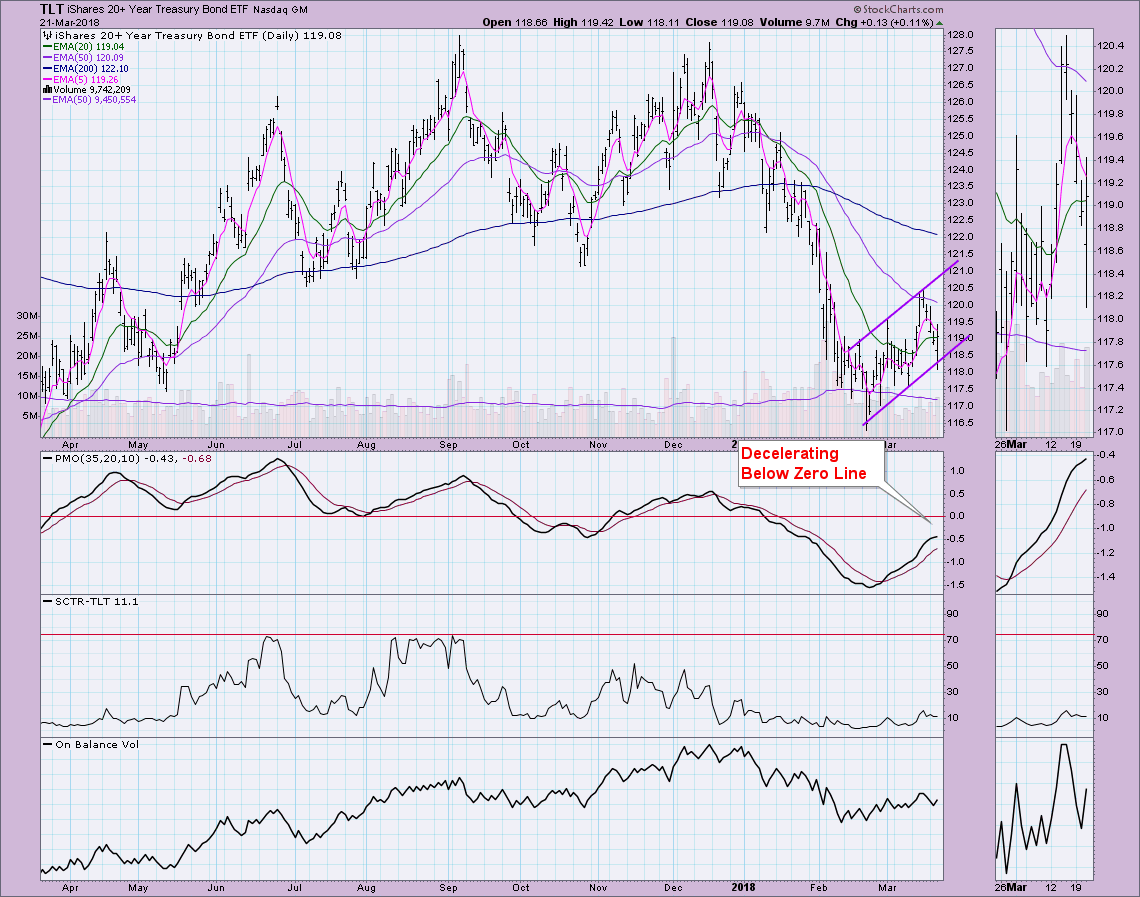