This week the rising wedge we had identified resolved downward, as expected. Once that happened, we needed to provide a context that could help determine an initial downside target, so we focused on the double top confirmation line, drawn across the low between the tops. That line was violated on Friday, and now the minimum downside target is the support line drawn across the February low. Actually, the double top downside projection is slightly below that line, but I chose to go for the obvious. The IT Trend Model BUY signal, one of the longest lasting that I can remember, switched to NEUTRAL on Friday when the 20EMA crossed down through the 50EMA. (A NEUTRAL signal is a 'soft' SELL signal because the position is cash or fully hedged, not short.) 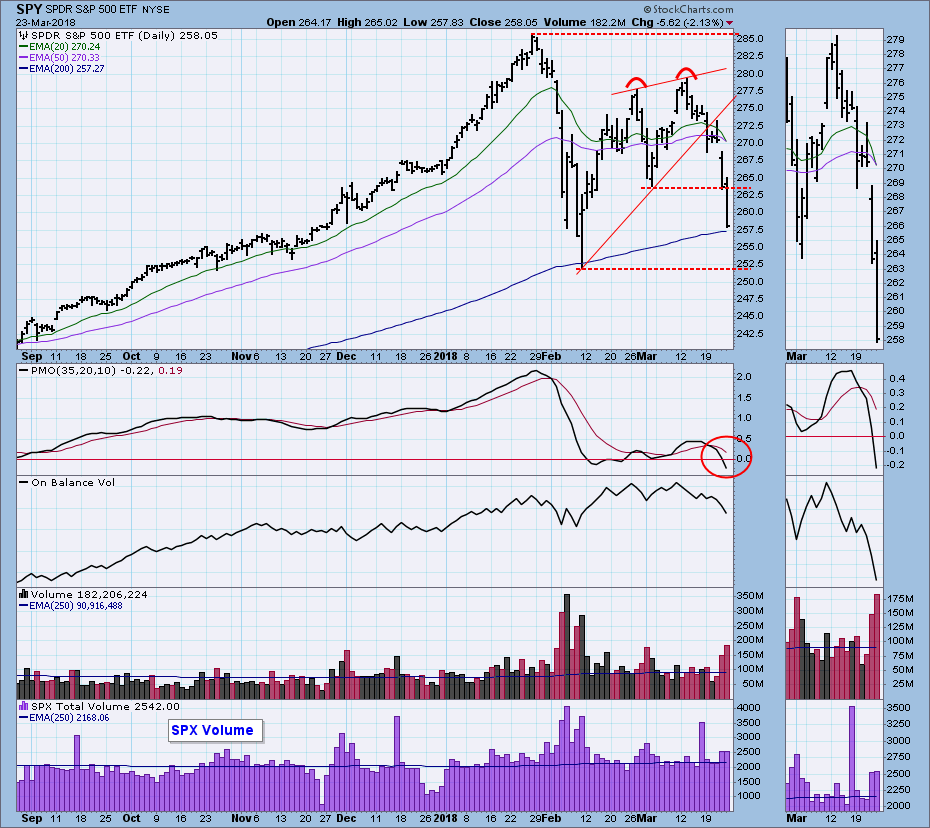 At the beginning of March, when I published the original version of this table, Arthur Hill also published an article pointing out that the five largest sectors represented over 75% of the S&P 500 market cap. I had never thought of that angle before for sectors, so I contacted him and he was kind enough to point me to the source (https://us.spdrs.com). Consequently, I have incorporated the percentage of total market cap represented by each sector. Only two of the ten sectors are still on IT BUY signals. Since they are two of the largest sectors, 40% of the total market cap remains bullish. 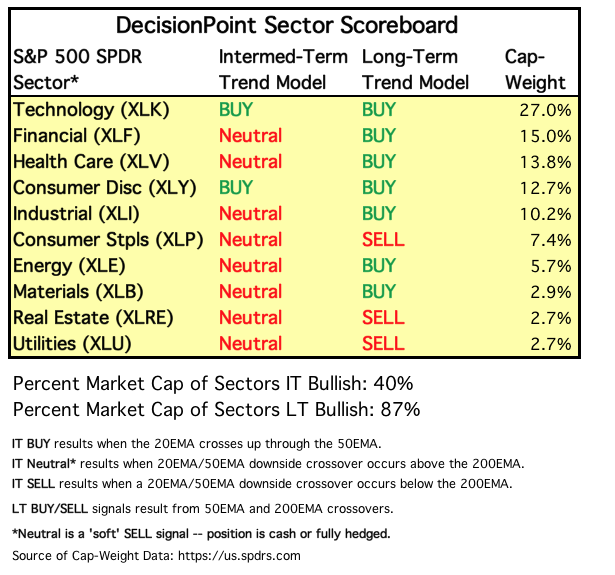 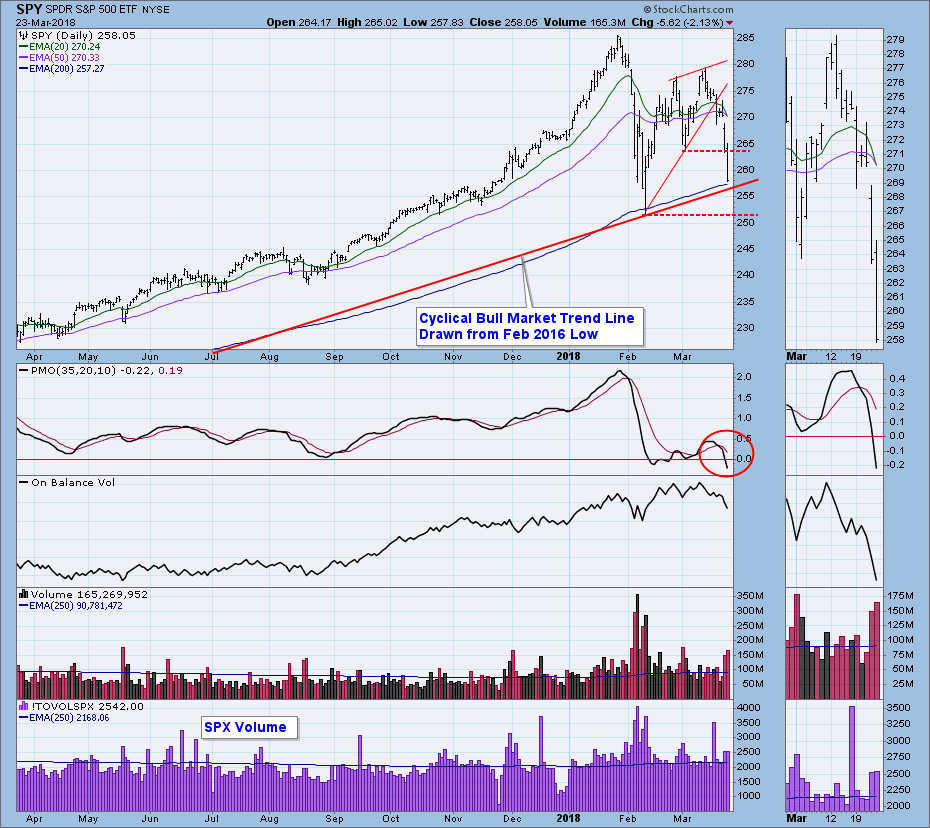 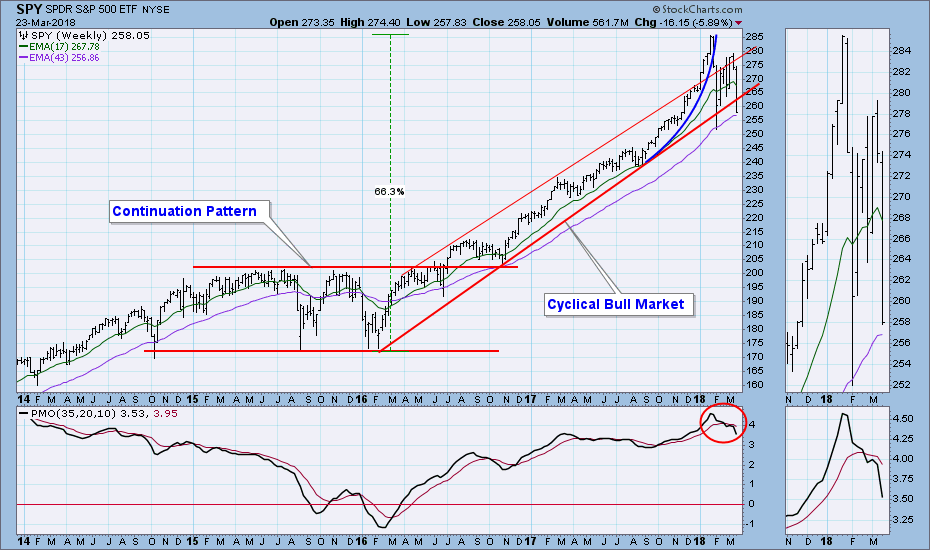 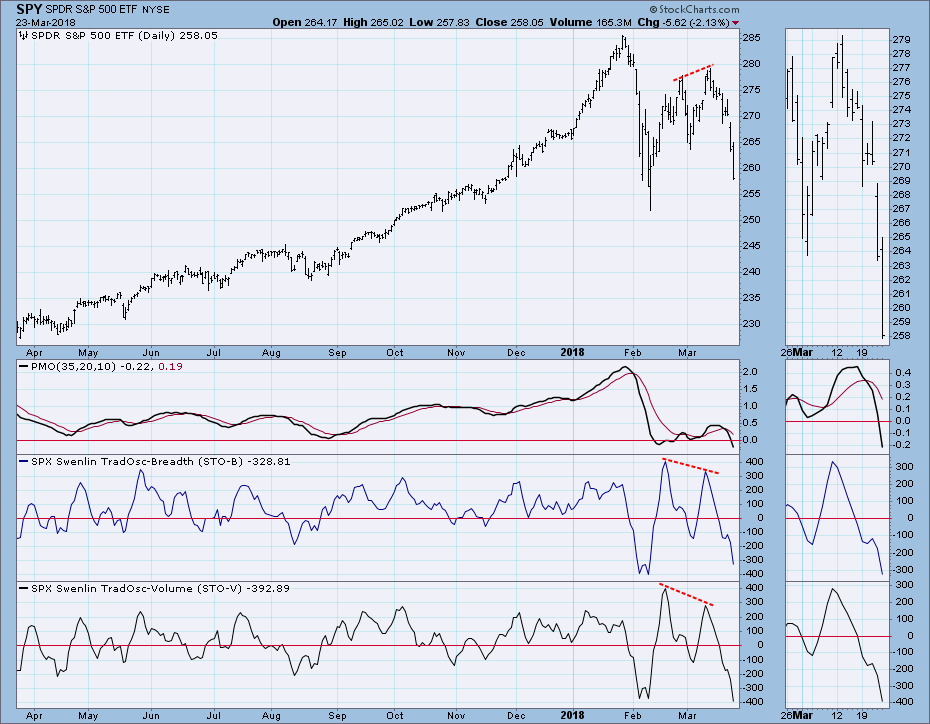 Intermediate-Term Market Indicators: Bear market stress on the ITBM and ITVM can drive them to around -300. As you can see, we have a long way to go, if we are in a bear market. 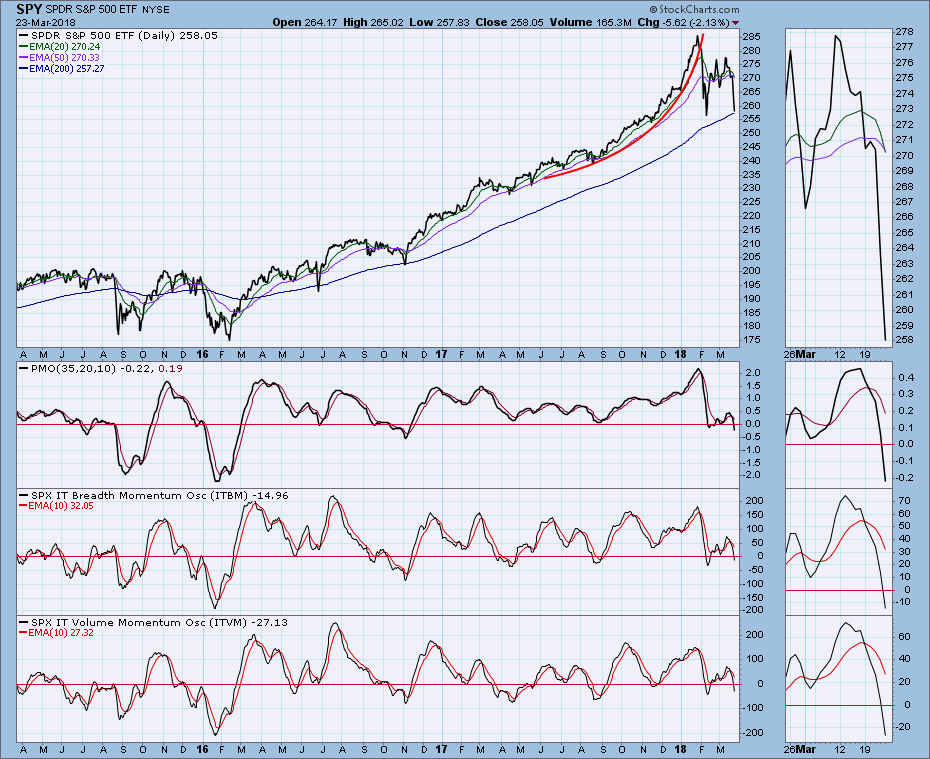 Conclusion: I am assuming that we are in a bear market. Not all of the technical signs have been triggered, but market behavior has me convinced. I want to emphasize that the parabolic advance and breakdown in January/February was the first and most convincing event pushing me into the bear camp. Now the IT Trend Model for SPY has changed from BUY to NEUTRAL (soft SELL), and price action is uninspiring to say the least.

Obviously, the market is in the process of retesting the February lows. I can make a case for price finding support on the 200EMA and the bull market rising trend line, but, if I'm right about the bear market, that support won't hold for long, if at all. 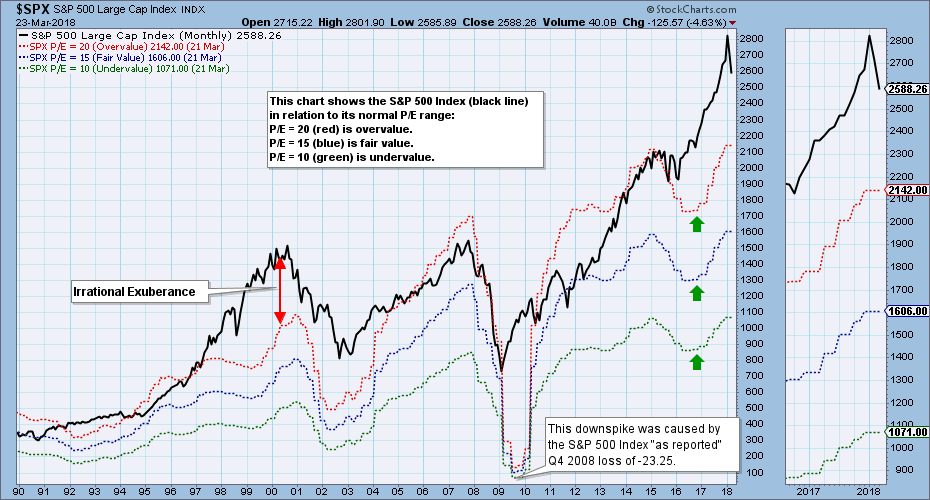 Daily Chart: The daily PMO has topped below the zero line, but the move so far does not look decisive. Let's expect a breakdown through the support at 23.40. 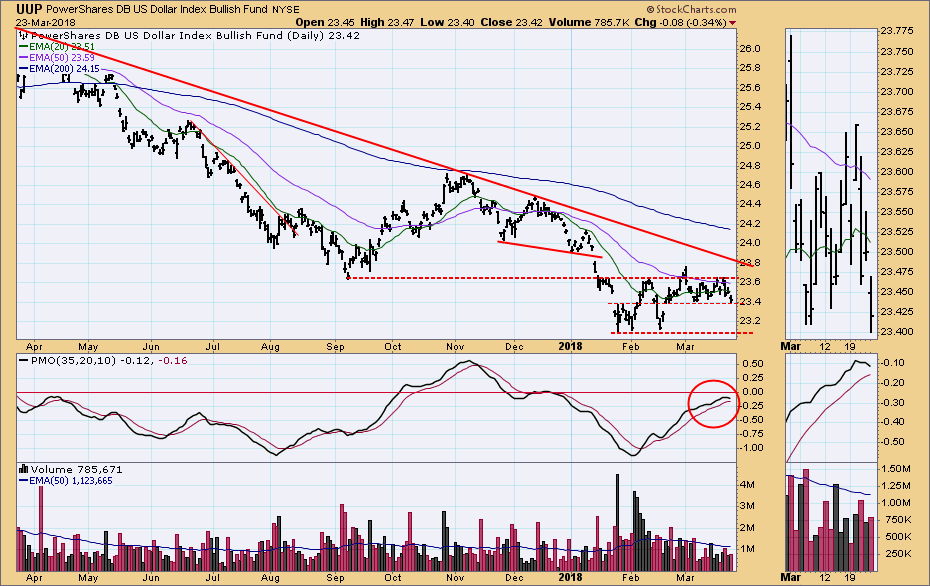 Weekly Chart: The weekly PMO is trying to top below the signal line and the zero line. If UUP tops below the top of the massive falling wedge, that would be more negative news. 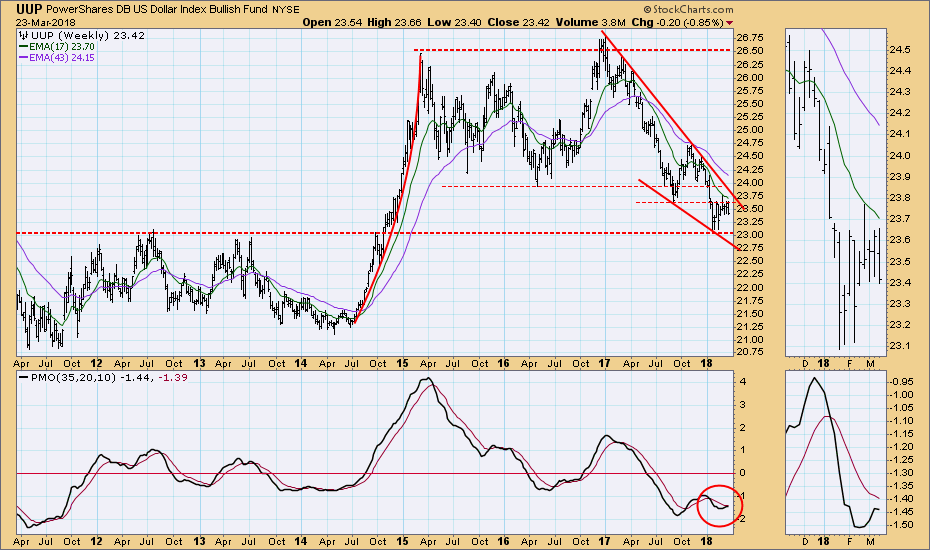 Daily Chart: With the exception of a short incursion below the confirmation line at the beginning of the month, the double top formation on gold failed to break down. This week gold broke above a declining tops line, and is headed toward overhead resistance at about 1364. 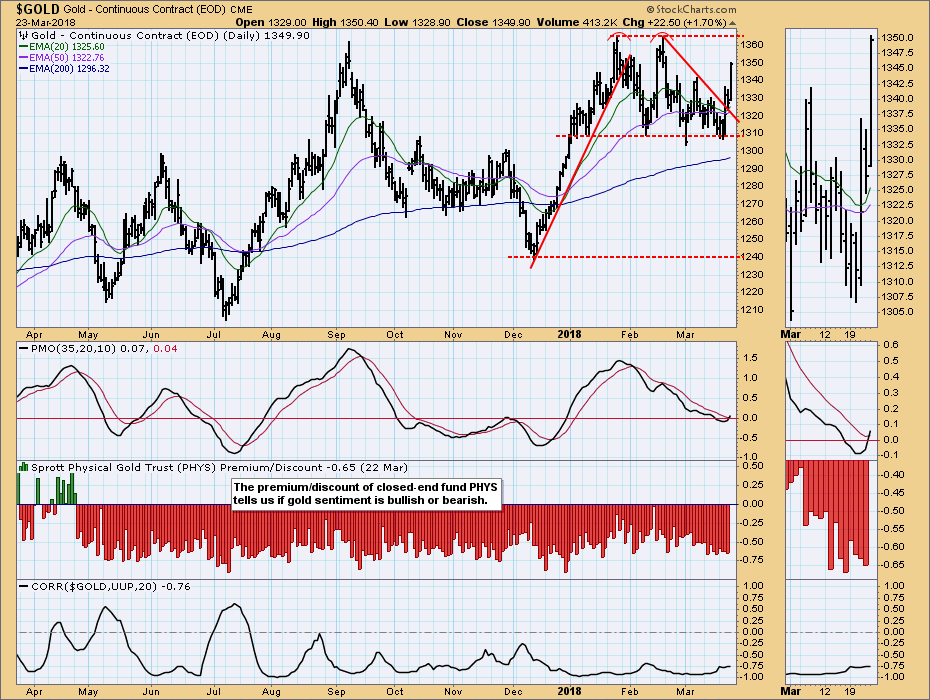 Weekly Chart: The most immediate overhead resistance is at about 1364, but longer-term resistance at 1375 is drawn across the 2016 high. As I have said many times before, that resistance must be taken out before a long-term rising trend will be established. Nevertheless, gold continues to be slightly bullish. 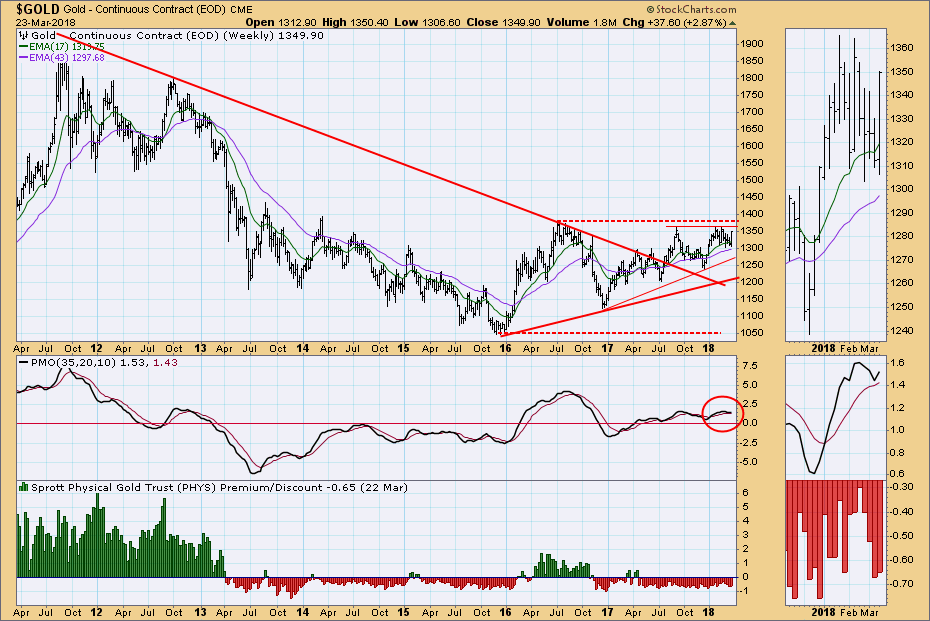 Daily Chart: This week USO broke above a declining tops line, but it is now up against horizontal resistance. The daily PMO is rising off the zero line, and it will allow for continued continued price advance before it becomes overbought. 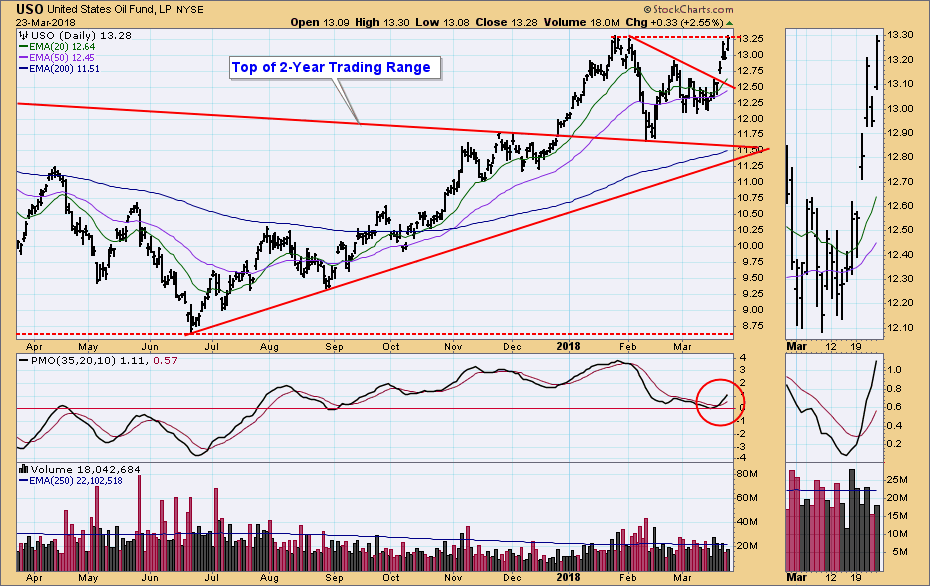 Weekly Chart: Assuming that the rally continues, 16.00 looks like a reasonable upside target (about $78/bbl for crude). The weekly PMO is overbought, but rising. 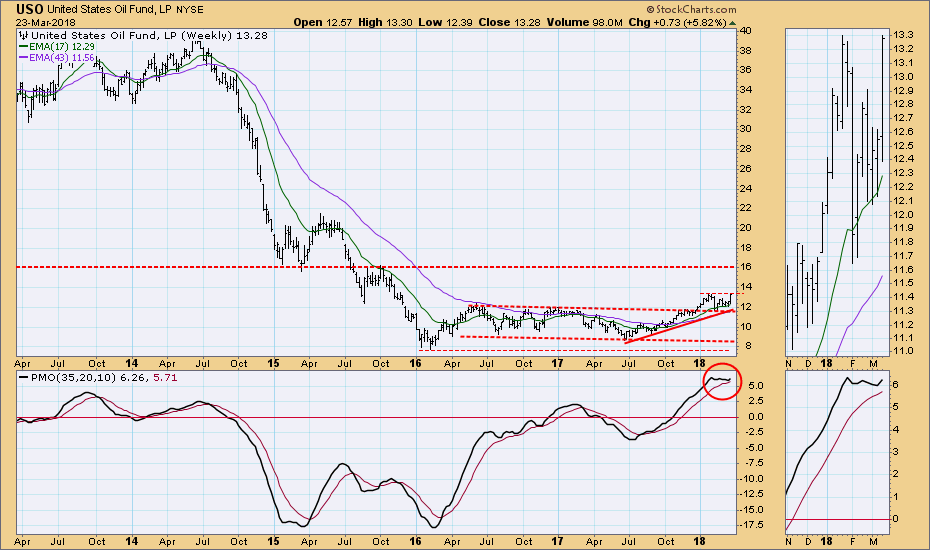 Daily Chart: Following the Fed's rate hike this week, TLT rallied up toward overhead resistance. I would have expected just the opposite, but this shows how the market's reaction to fundamentals can often be puzzling. Since TLT is in a bear market, I assume that resistance will not be overcome. 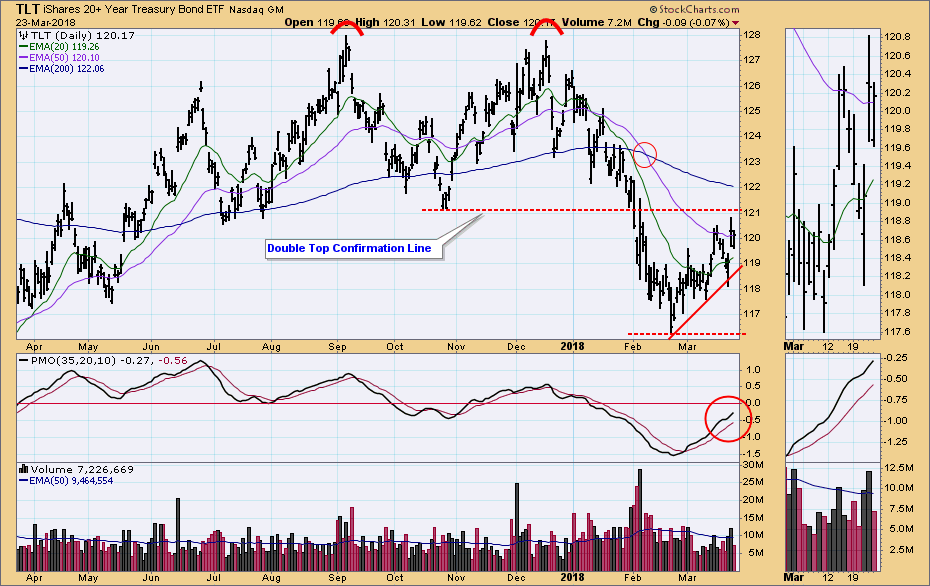 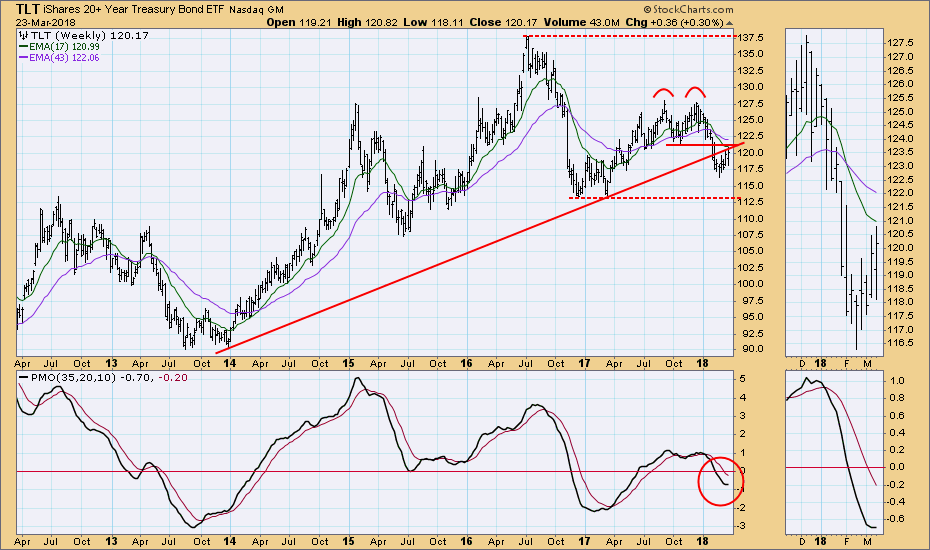