Amazing! A week without any DP Scoreboard updates. All of these indexes came very close to new PMO SELL signals yesterday with the big decline, but today's rally pop changed that quickly with all four PMOs turning back up and away from their signal lines. While not a news flash, small-caps are clearly outperforming the large-cap indexes. This likely has to do with the rising Dollar and its effects on overseas business for large-cap multinational companies. The Russell 2000 logged new all-time highs while the Scoreboard indexes have mostly struggled and are far off all-time highs. I look to small-cap leadership to give the larger indexes a push in the right direction. 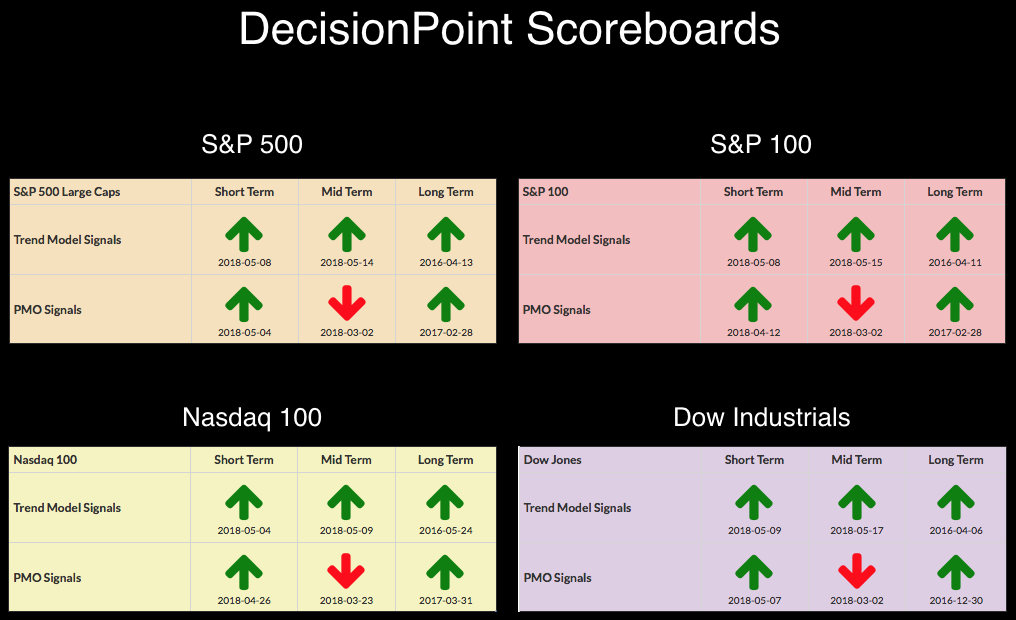 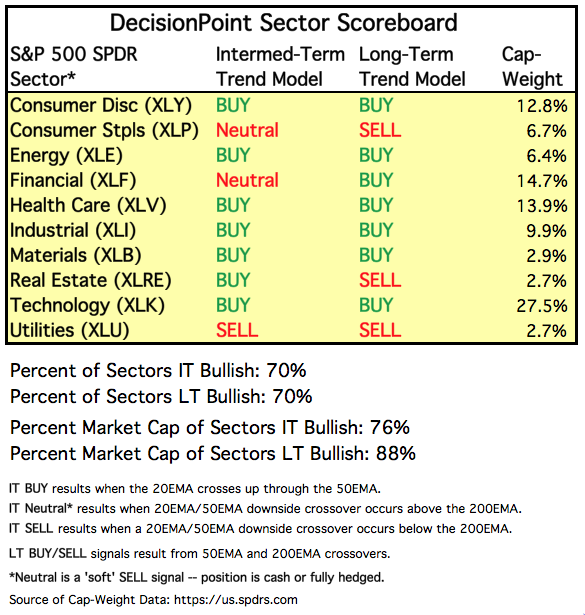 SPY Daily Chart: I was very concerned when I saw yesterday's breakdown and drop below the 50-EMA but what a difference a day makes. Today saw trading back above the 20- and 50-EMAs. Note that the PMO which was headed for a SELL signal, turned up on today's rally. The SCTR is healthy and while the OBV may not look that good, we did see a higher low than the one from early May. 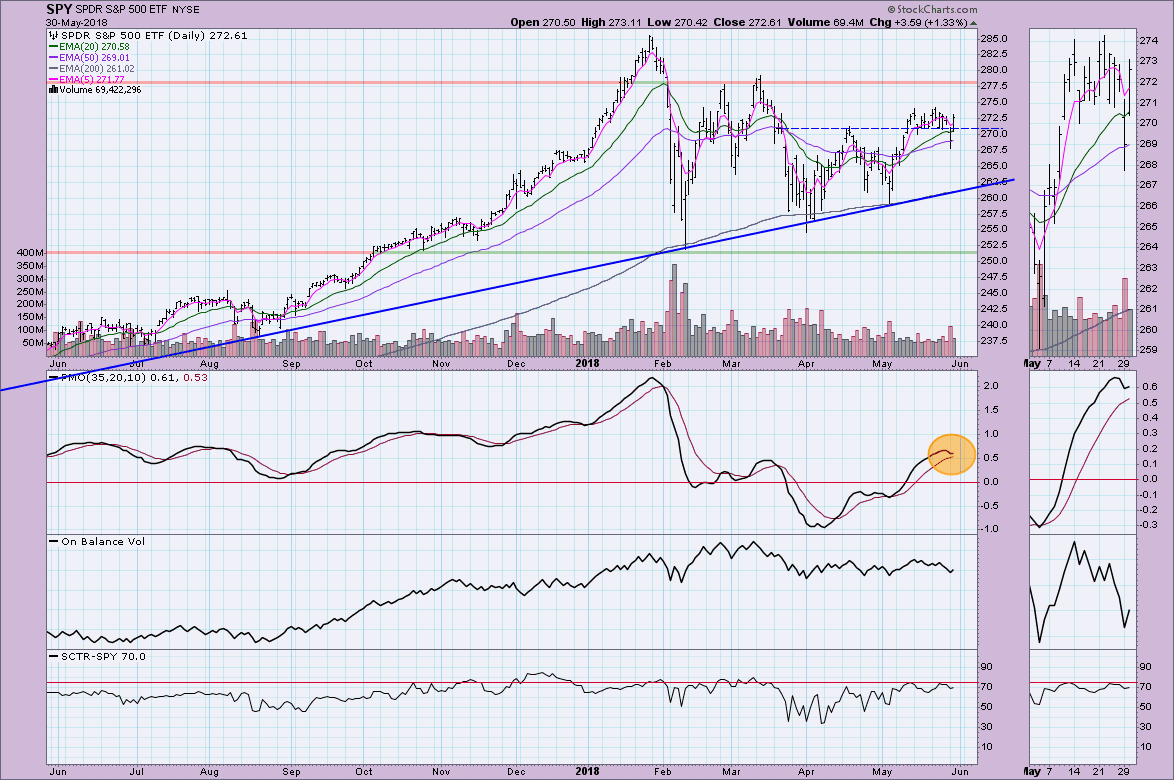 Climactic Market Indicators: This is where I see a buying initiation lining up. Yesterday the VIX dropped below the bottom Bollinger Band on climactic negative readings. Today it still managed to touch below the band. This is important because we have climactic positive readings today. Since we've been in a lull and decline, I see those climactic numbers and the penetration of the bottom Bollinger Band as a buying initiation, not an exhaustion. I'm looking for higher prices through the end of the week. 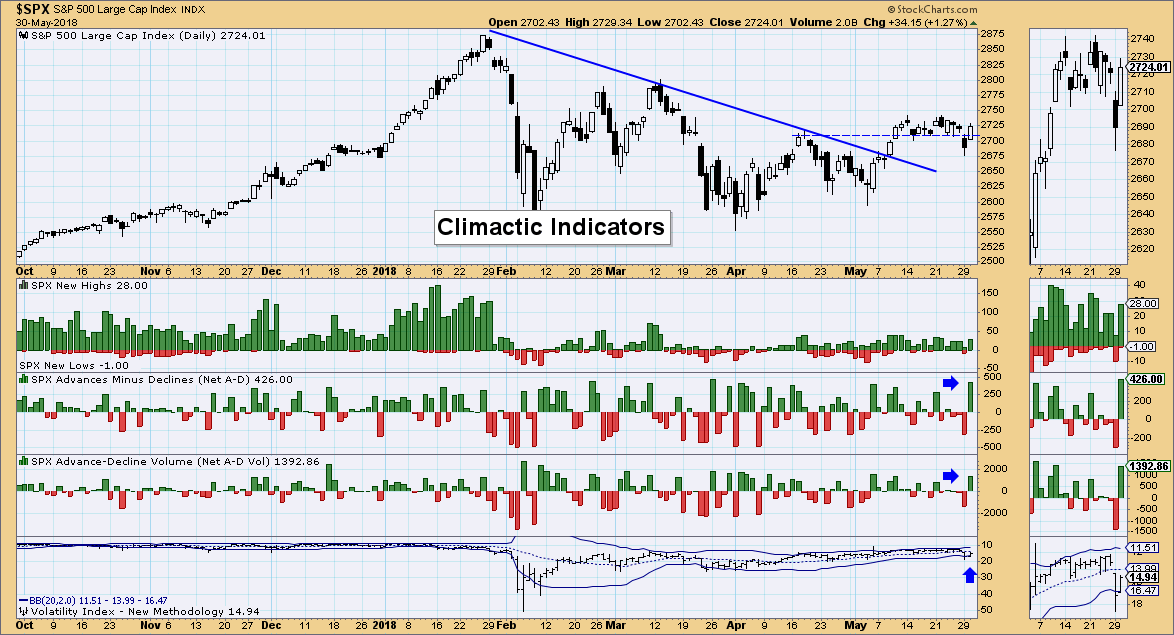 Short-Term Market Indicators: These indicators remain in neutral, twitching back and forth. Today they did turn up, but I won't get excited until they both are at least above the zero line and a clear up trend is in play again. Look at these as neutral but improving somewhat. 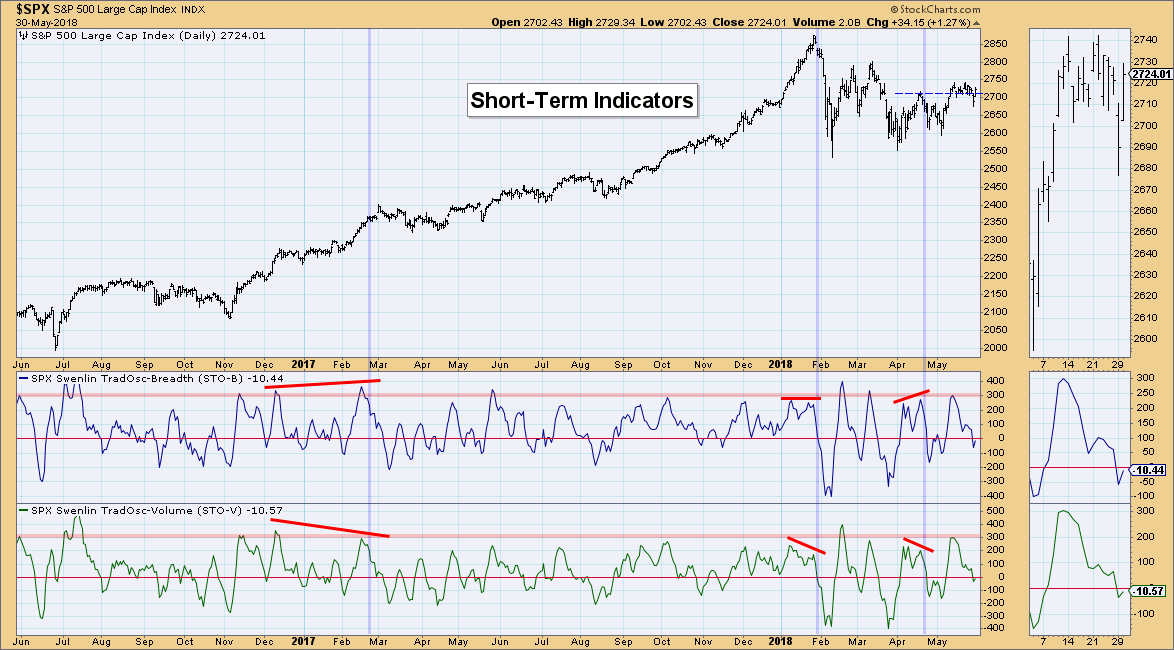 Intermediate-Term Market Indicators: I said in last week's DP Alert that I wasn't going to worry about the decline in these indicators until they had negative crossovers. Well, the ITBM did and the ITVM narrowly avoided it. The good news is that both have turned up and the rising trend hasn't been deserted yet. 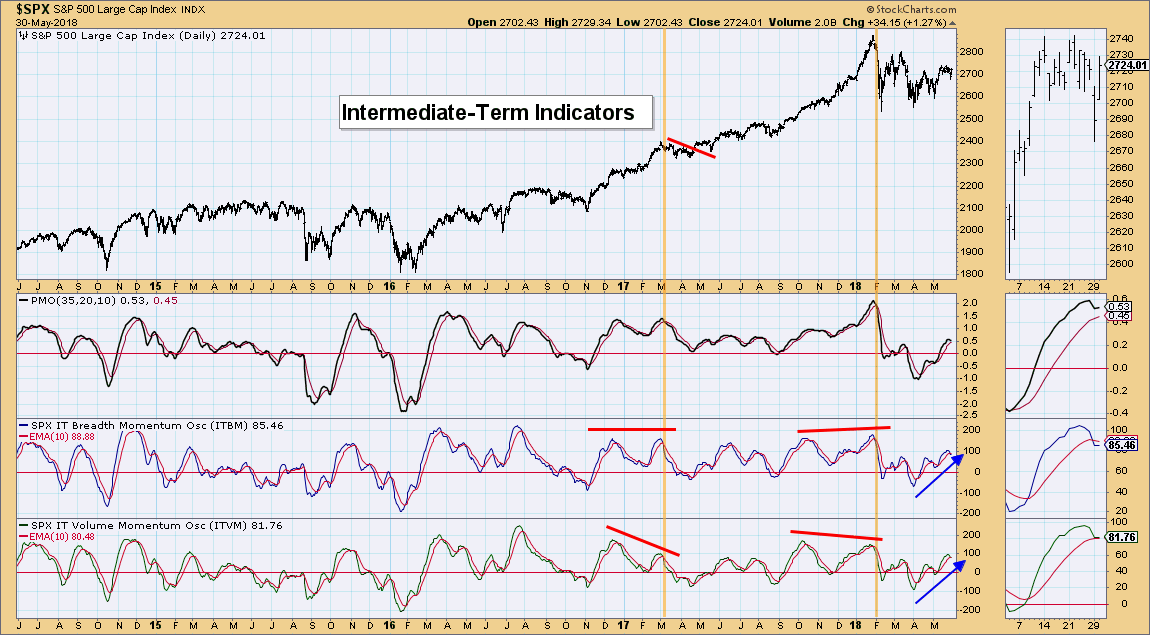 Conclusion: Small-caps should give large-cap indexes a hand up given their relative strength right now. The DP Sector Scoreboard shows more BUY signals arriving, leaving only Utilities, Consumer Staples and surprisingly (although not too surprisingly given the dive in yields) Financial sectors with Neutral signals. In a bear market we would expect to see Utilities and Staples lead. That is not the case, which suggests the rally should kick start soon.

UUP Daily Chart: The Dollar has been on a raging rally since mid-April. It was "due" and boy did it take off. Today we got a sizable pullback toward support at the October/November highs. The PMO tipped downward today on the decline and it is getting very overbought. I'd look for consolidation along this area of support. The PMO needs to unwind and that would do the trick. Given the voracity of this rally, I'm not looking for it to decline much...at worst I'd look to the area of support at $24.50. 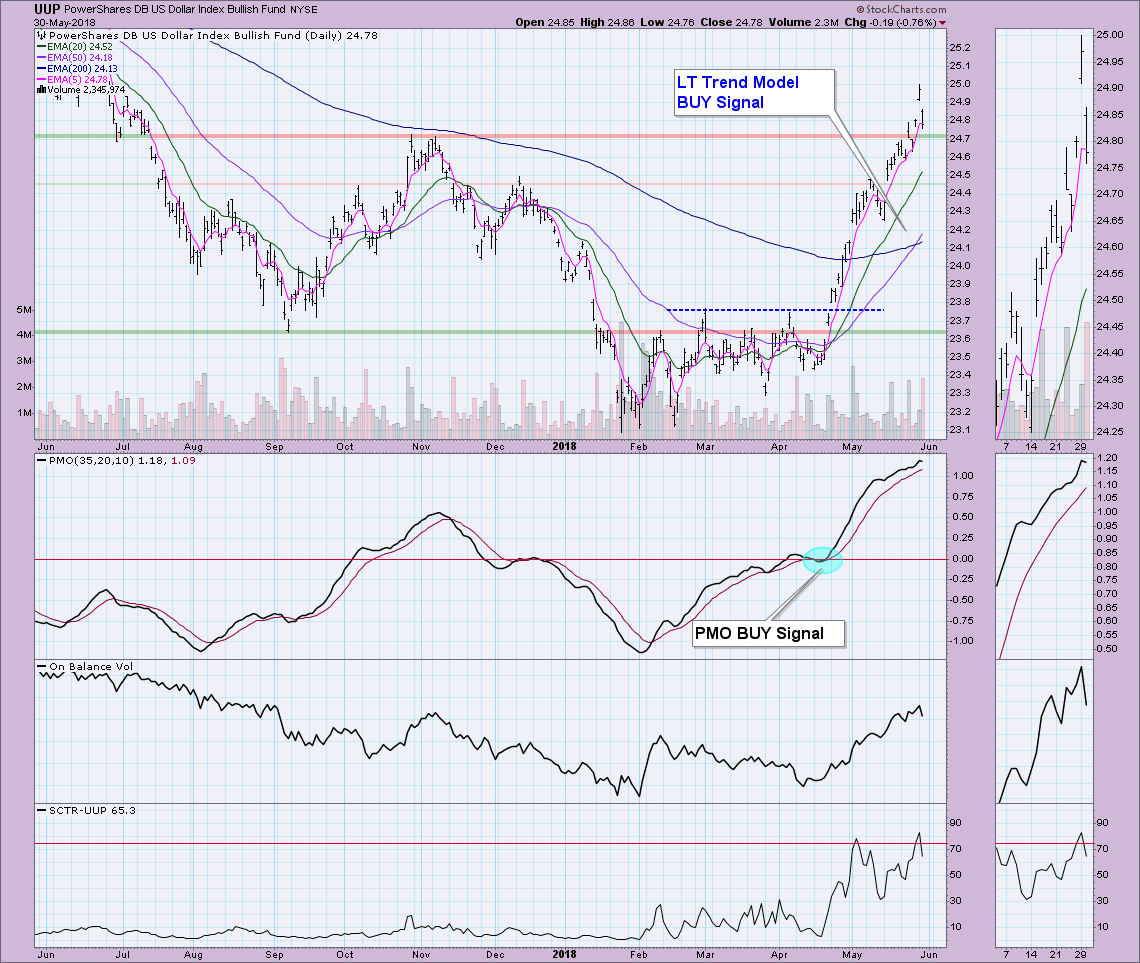 GOLD Daily Chart: Gold rallied today but is still being stymied at 1310 resistance. Note that there is a premium now on Sprott Physical Gold Trust. This suggests excessive bullishness which tells me that Gold will likely continue to be stuck at resistance or see a move lower. The good news for Gold is that it is uncoupling from the Dollar as the reverse correlation is weakening. If the Dollar does consolidate, it would offer some opportunity for Gold, but that premium tells us that sentiment is very bullish on Gold. Sentiment being contrarian, that is bearish for Gold. 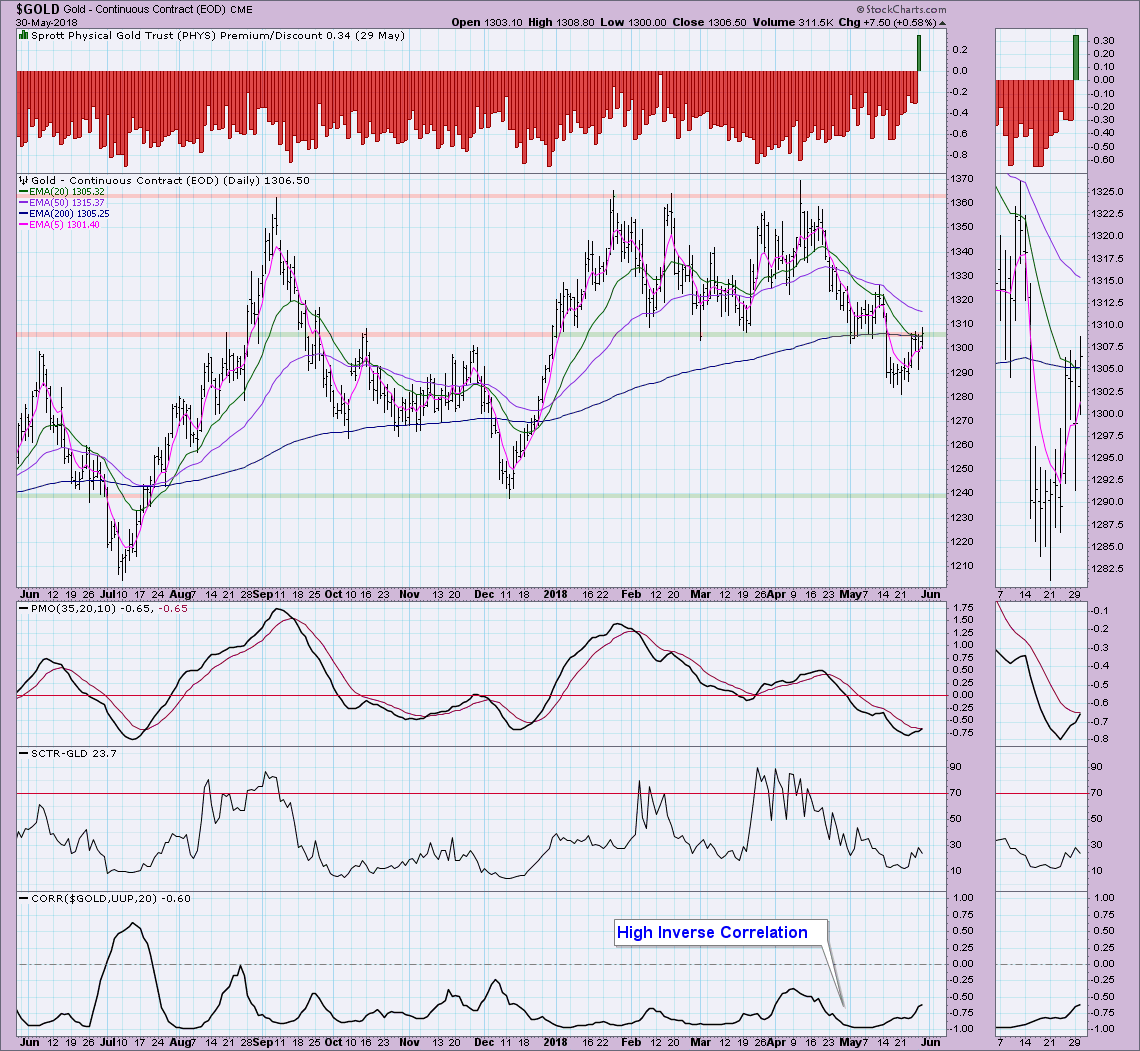 USO Daily Chart: A much needed correction occurred on Oil and that was followed today by a healthy bounce off the rising bottoms trendline. The PMO is now getting some needed relief and opens up opportunity for another move higher that wouldn't move it into overbought extremes. With the summer months approaching, I would expect higher prices. 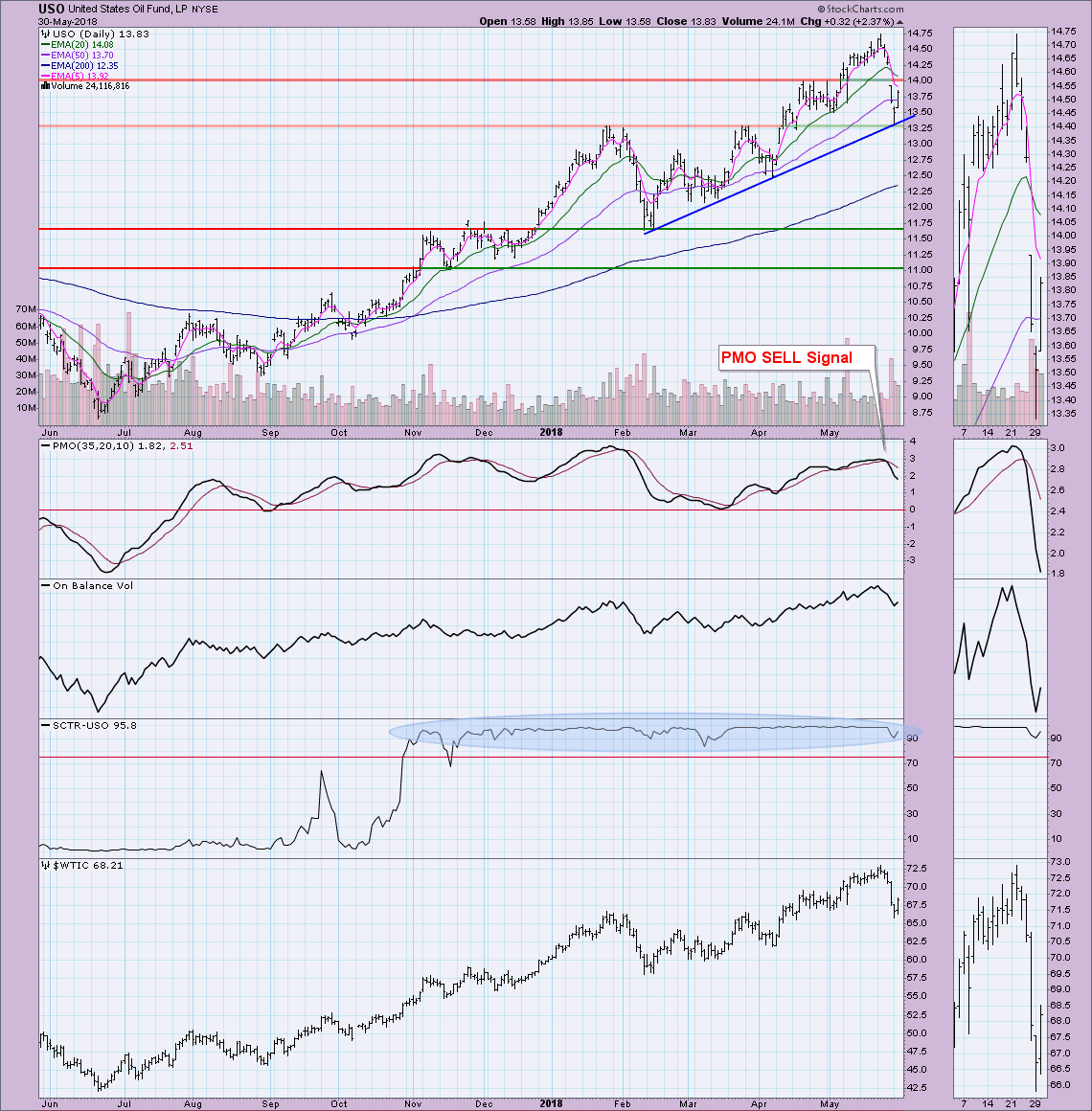 TLT Daily Chart: Treasury yields skyrocketed earlier this month but took it hard on the chin the last few weeks. This is what is fueling the rally in Bonds right now. TLT has now dropped back below overhead resistance. While I think you could make a case for a double-bottom off the February and May lows, the 50-EMA is well below the 200-EMA which puts TLT in a bear market configuration. Bullish patterns don't usually execute properly when the 50-EMA is that far below the 200-EMA. The PMO is encouraging, but today saw the failure of the test above resistance at $122. If we see a decisive (3%+) break above that resistance level, then we can start talking about it's execution. Today's immediate failure of yesterday's breakout suggests it was a false breakout. 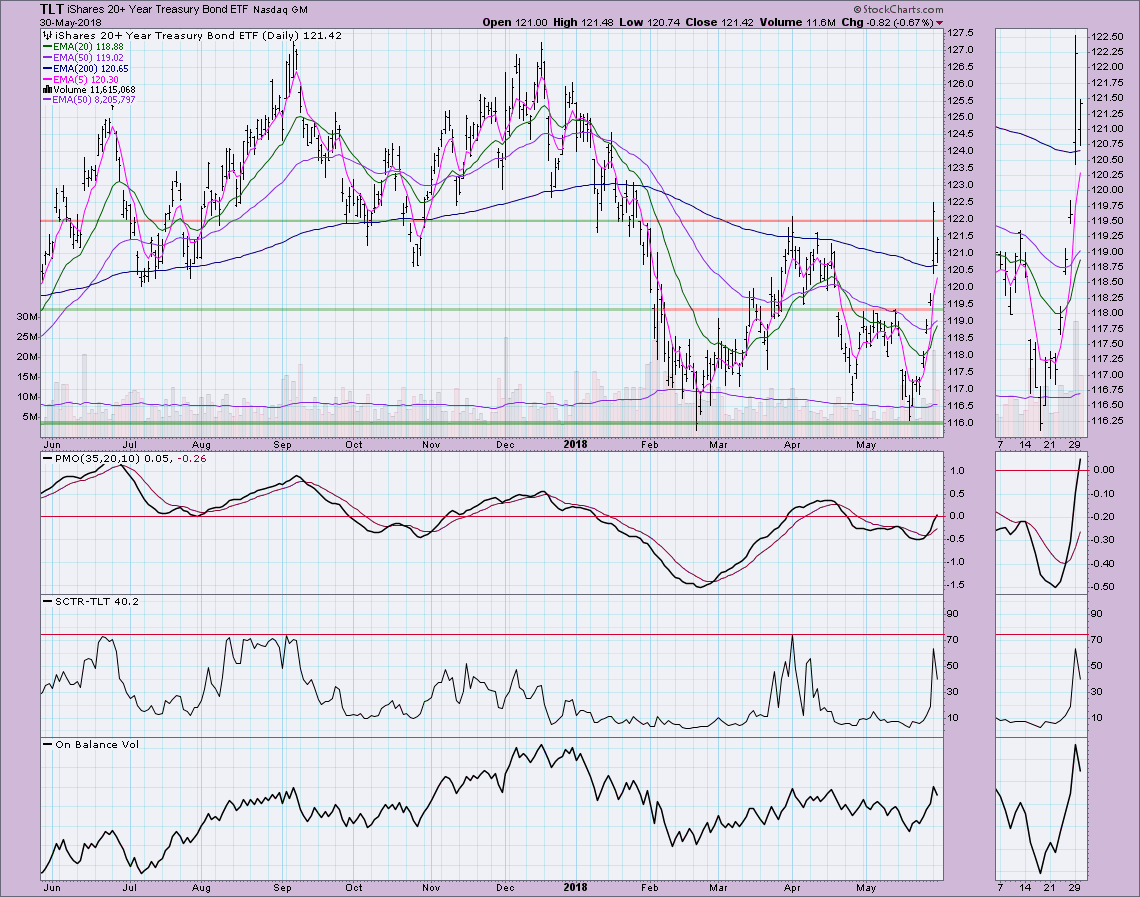