On Thursday the market recovered nicely from an early selloff, and today it had a strong finish. But in the market, volume equals love, and the short volume on Friday was barely a peck on the cheek. On my SPY chart I like to show, in addition to SPY volume, volume for the S&P 500, and the benchmark is the 250EMA of volume. In this case both gave a resounding "meh." Despite some interim excitement, the market was virtually unchanged for the week. 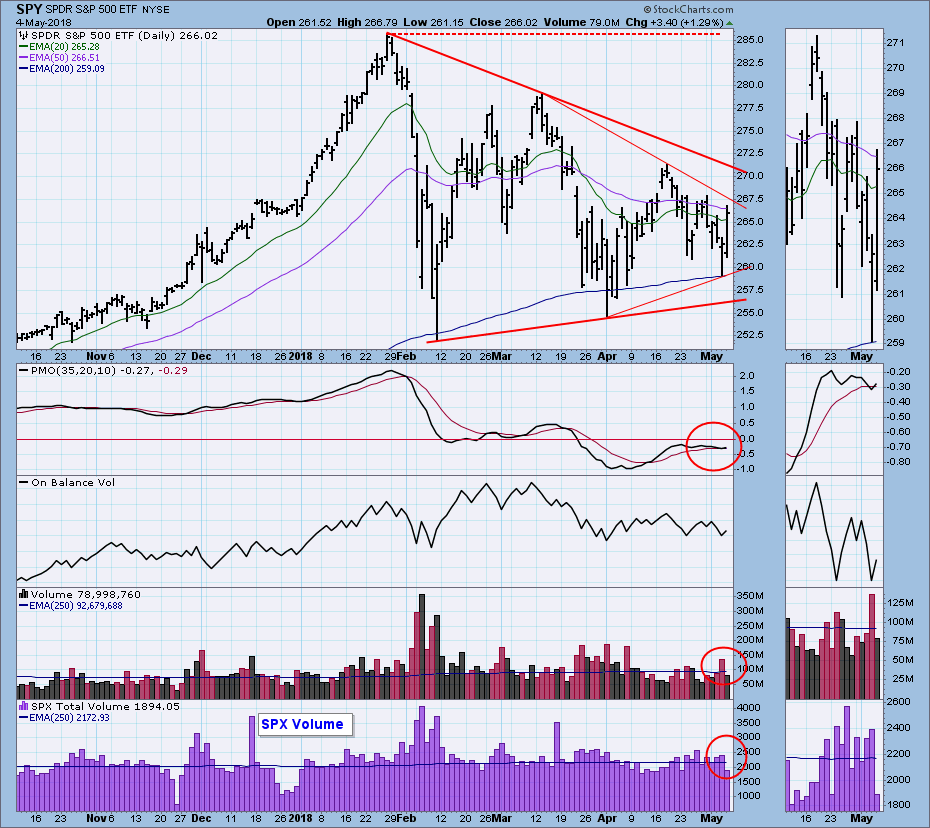 This week Real Estate (XLRE) changed from an IT Trend Model SELL to BUY. 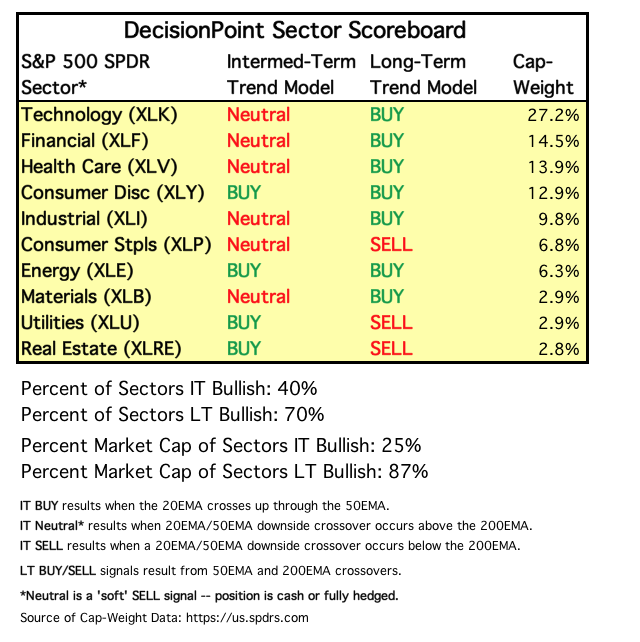 SPY Daily Chart: Since the January price top, the market has been moving sideways and forming a symmetrical triangle. The failure of the April rally to reach the top of the triangle implies weakness. The daily PMO changed direction six times in the last two weeks. While I said that a symmetrical triangle had formed, it is not quite symmetrical. The bottom side of the triangle is flatter than the top side, which favors a downside resolution of the pattern. 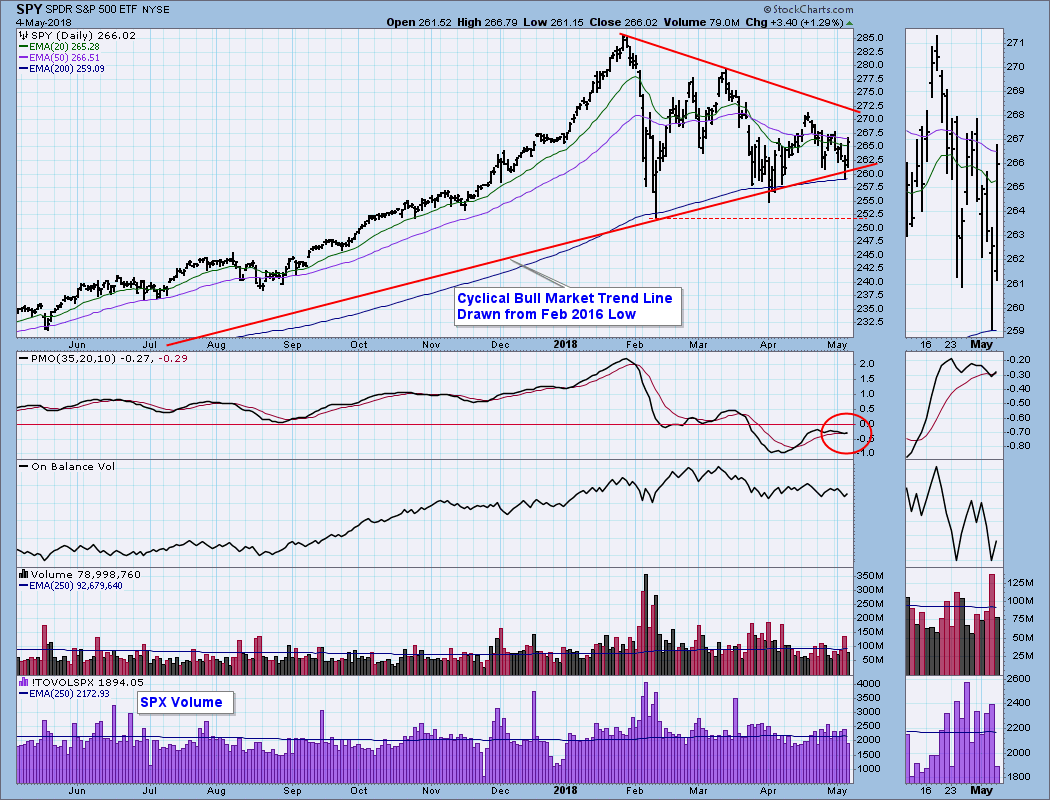 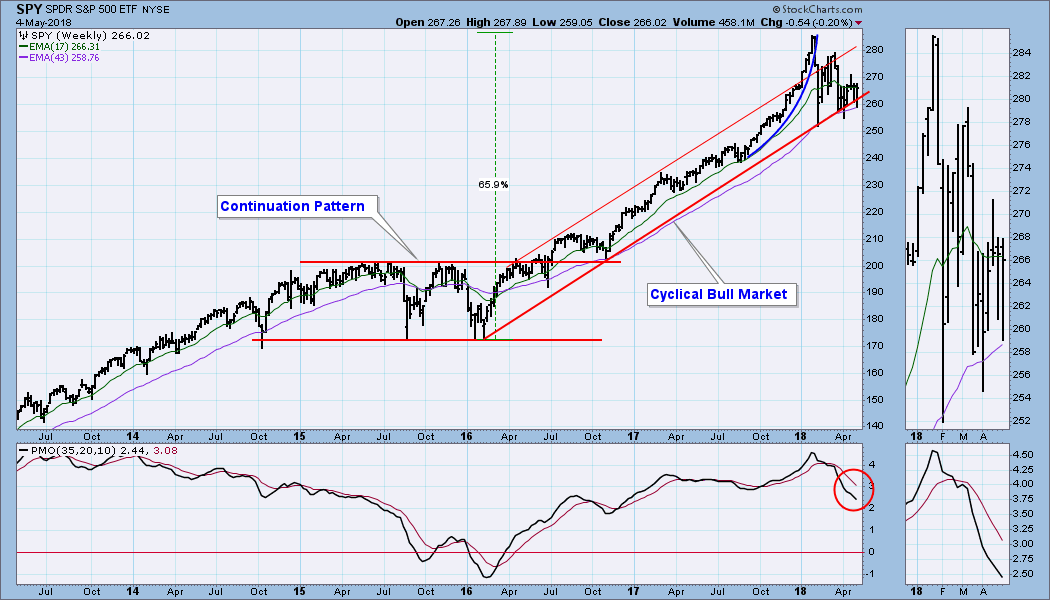 Short-Term Market Indicators: The STO-B and STO-V are not very useful at this point. They are only modestly oversold, and have changed direction five times in the last two weeks. 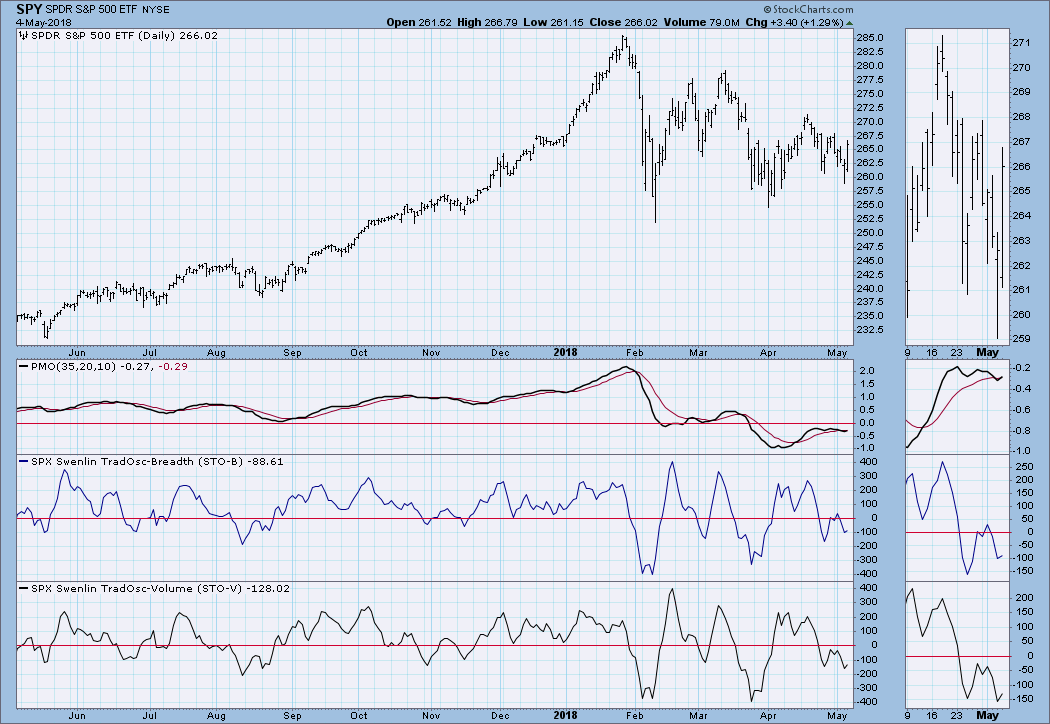 Intermediate-Term Market Indicators: The ITBM and ITVM are in the neutral zone. 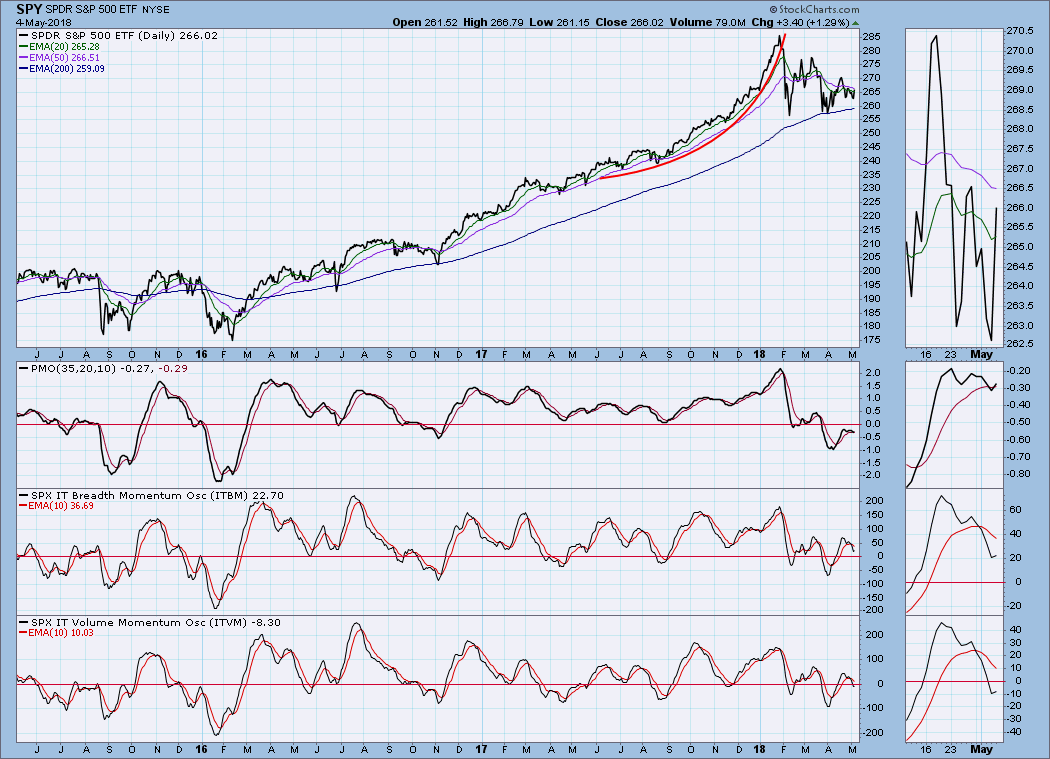 Conclusion:  While I think we have entered a bear market, it is clear that, at the very least, the market is in a correction mode. As a practical matter, is there really any difference? The IT Trend Model being NEUTRAL suggests being in cash or fully hedged. Bull or bear, that is a reasonable approach in either circumstance.

UUP Daily Chart: UUP began the week with another gap up, then consolidated the rest of the week.

UUP Weekly Chart: In this time frame the breakout from the falling wedge formation is quite dramatic, and it appears that a strong up move has begun. 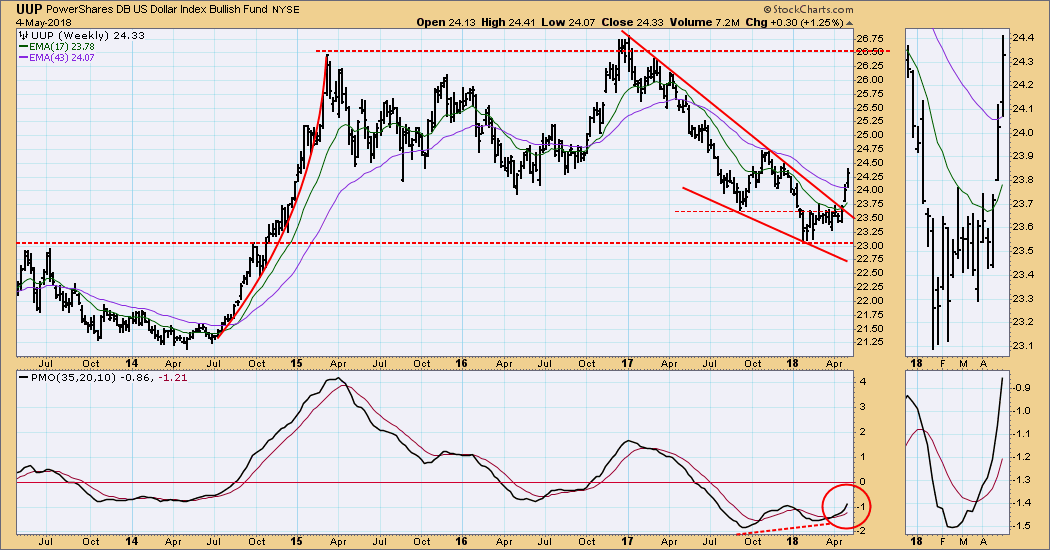 GOLD Daily Chart: Thanks to strength in the dollar, on Tuesday the IT Trend Model for gold changed from BUY to NEUTRAL, because the 20EMA/50EMA downside crossover took place above the 200EMA. If the dollar continues to advance, gold will suffer. 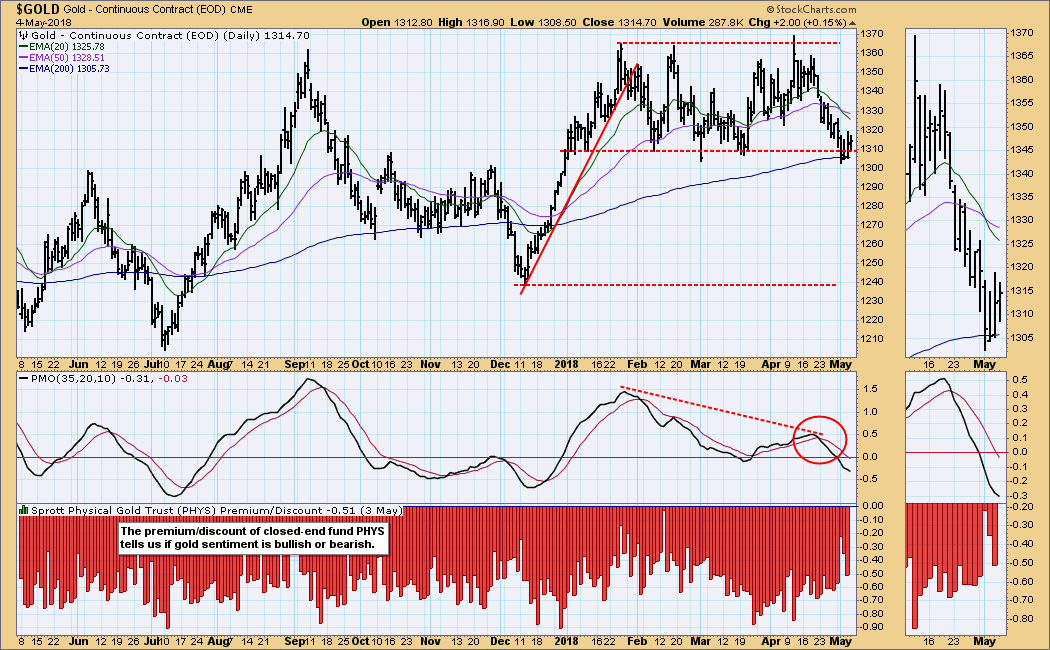 GOLD Weekly Chart: Gold still looks positive on the weekly chart. While the weekly PMO has crossed down through the signal line, we can see that the PMO remains in positive territory in a flat configuration that it has held for about a year. 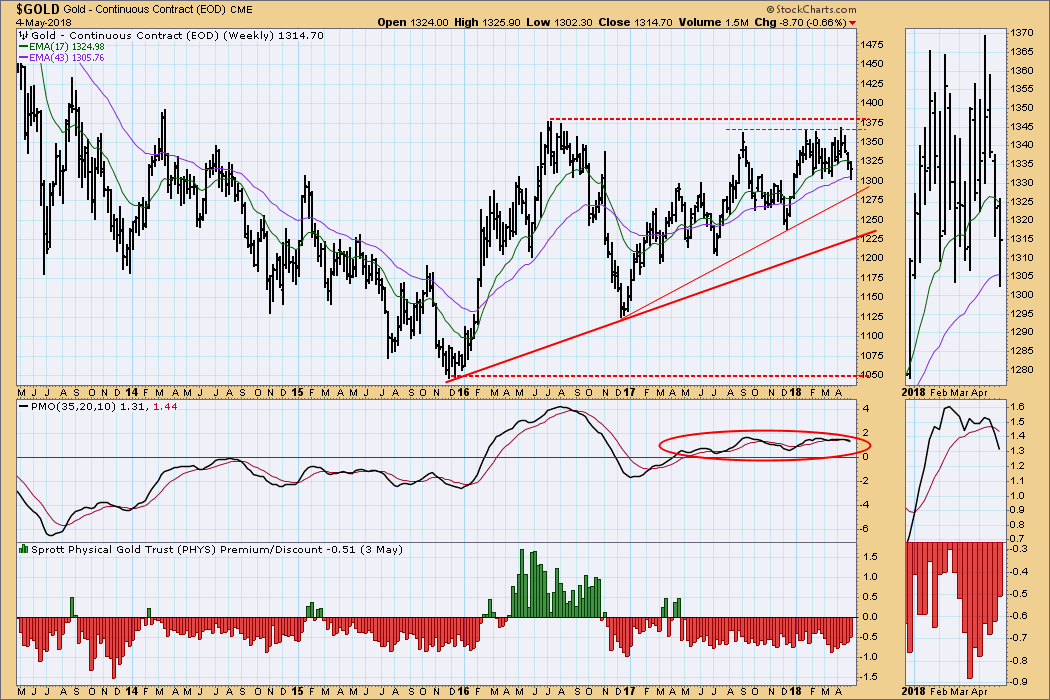 USO Daily Chart: It isn't a classic parabolic rise, but you can see how the angle of the rising trend lines from the June low are accelerating their angles. This will probably call for some corrective action in the near future. 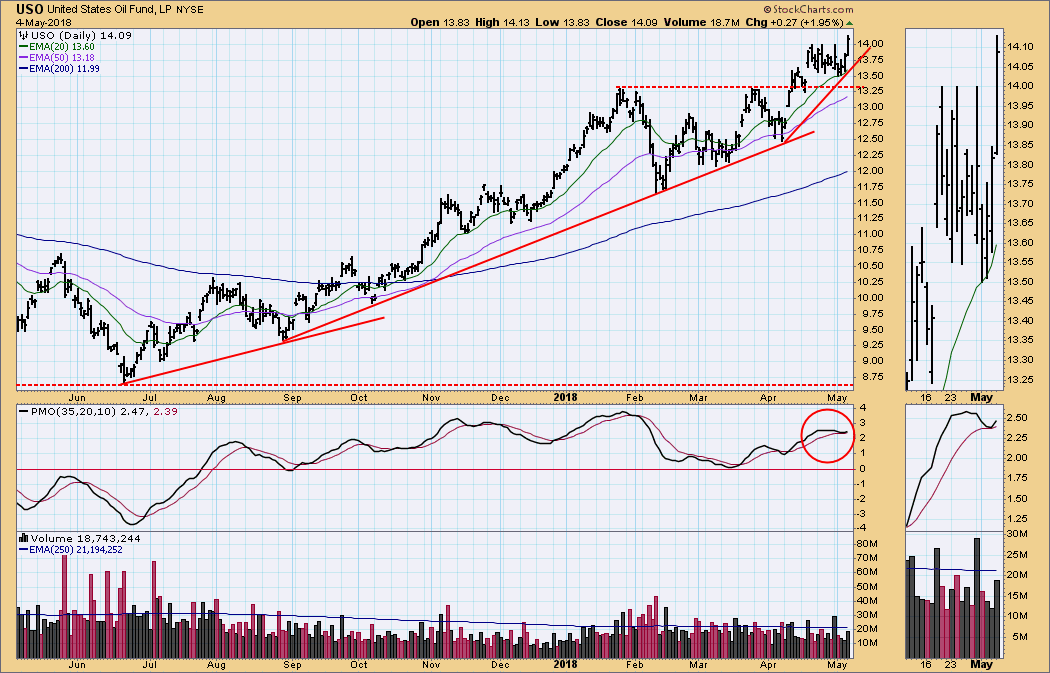 USO Weekly Chart: USO will encounter important resistance at about 16.00. This equates to about $78/bbl for crude. 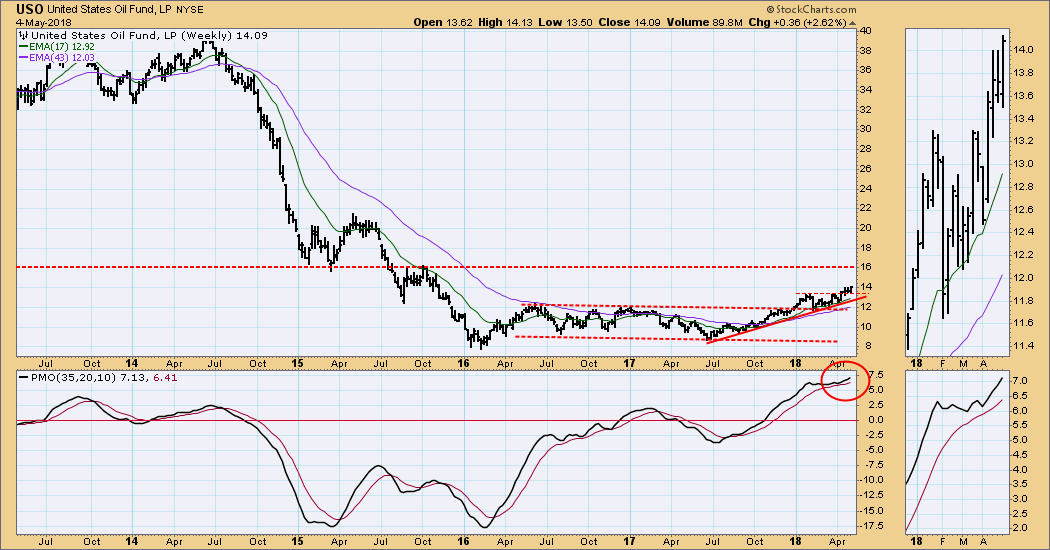 TLT Daily Chart: The daily PMO has formed a second bottom in as many weeks, while TLT has entered a short consolidation. TLT could move higher in the short term, but with interest rates on the rise, it is hard to visualize a positive longer-term outcome. 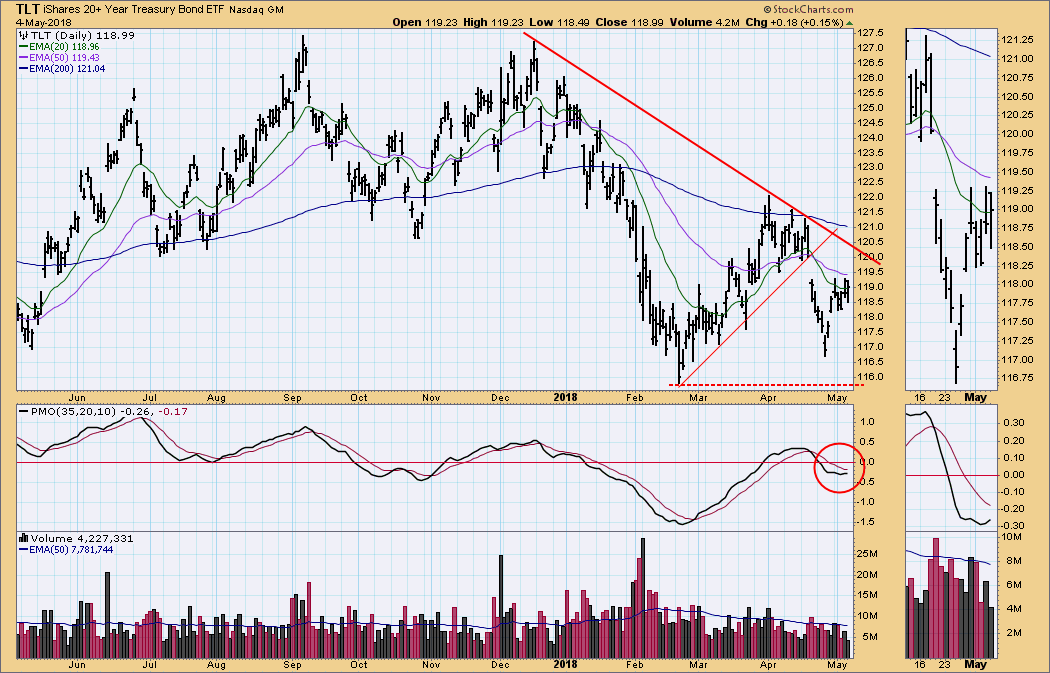 TLT Weekly Chart: The current weekly PMO top below the signal line should be viewed as negative, although, it has the potential to be a sign of a pending rally like the two similar tops in 2017 and 2015. But I also noticed this week that there is a head and shoulders formation, which implies a negative outcome. 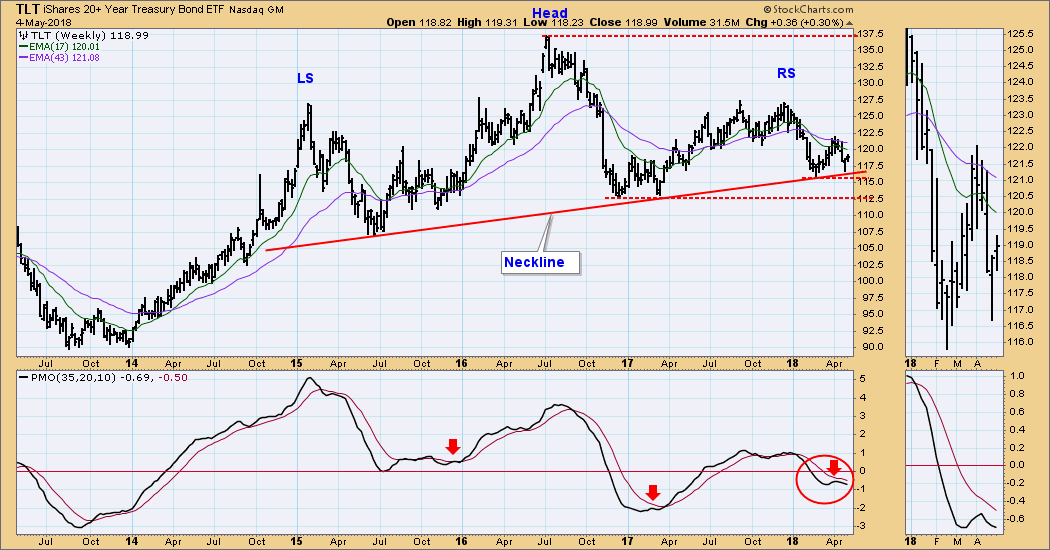