Last week I wrote: ". . . the market seems to be set up for a pullback or correction.  . . .  Recent declines have been very short-lived, so I can't make a case for anything too serious." What we got on the first trading day of this week was a sharp -1.5% intraday pullback, and that was it. We had been watching a flag formation (the ghost of which I left on the chart), but Tuesday's decline and subsequent advance created a higher low in the advance from the May low. The result is a bearish rising wedge, which is now a dominant formation on the chart, and the likely resolution of the pattern is down. 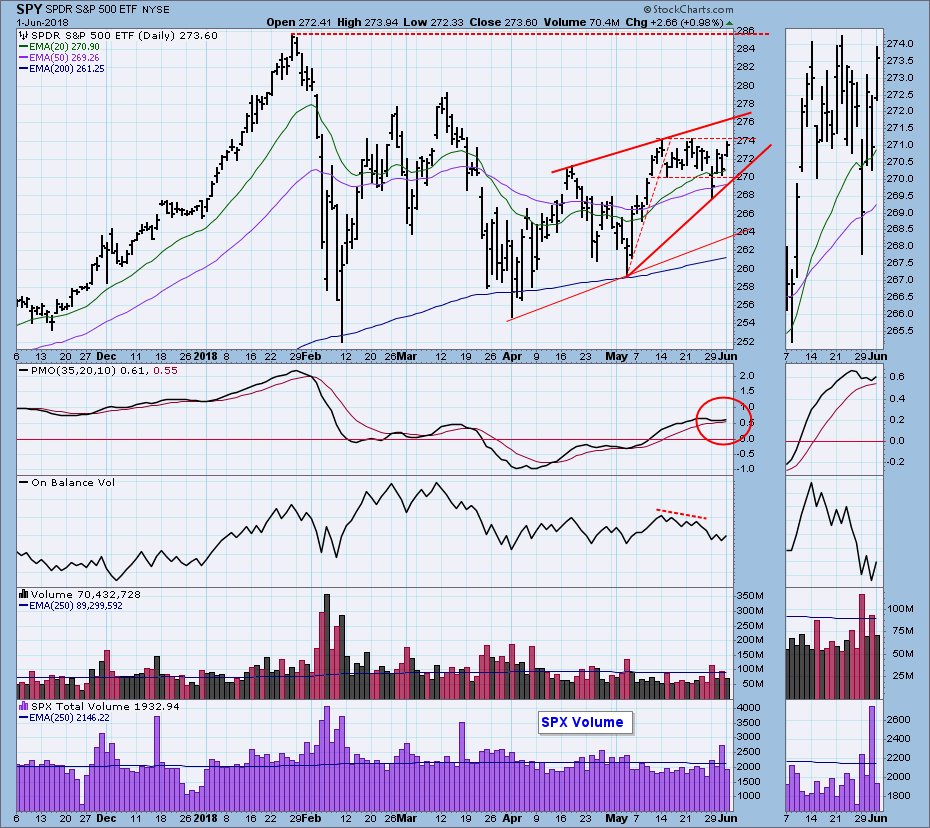 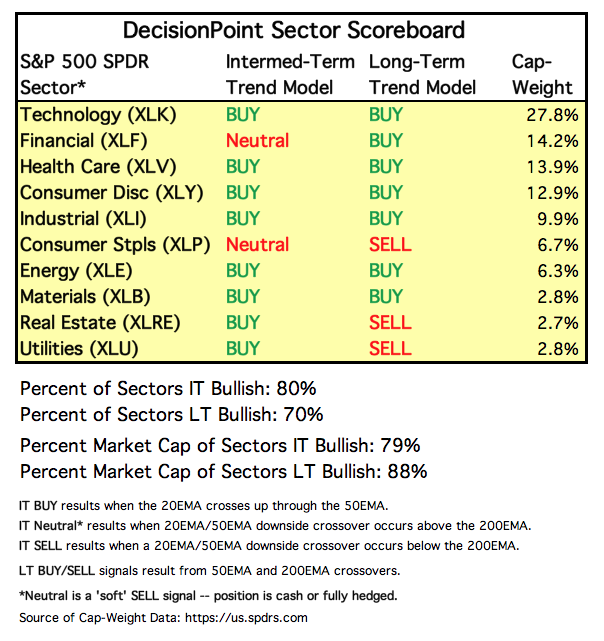 SPY Daily Chart: There is too much minutia on this chart to cover seriously. Over all, I don't want to buy it, nor do I want to sell it. 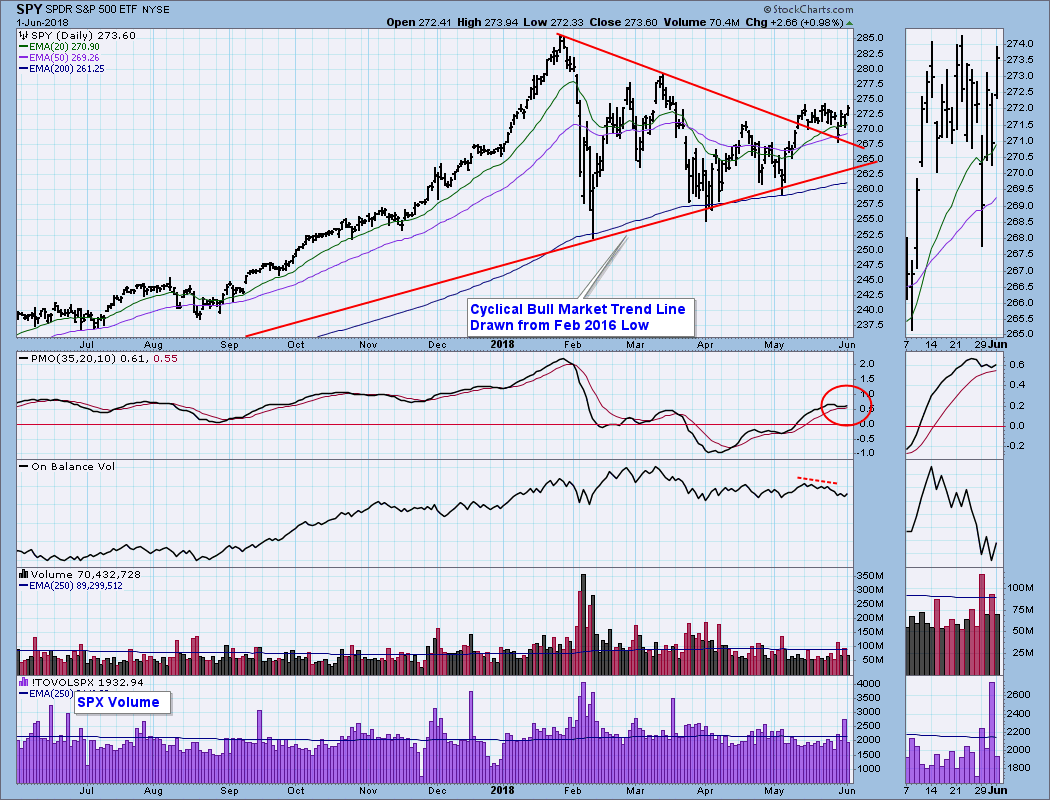 SPY Weekly Chart: I think the market is still correcting the excesses of the parabolic advance that took price well above the cyclical bull market rising trend channel. The most negative thing on this chart (and it's not a big deal) is the weekly PMO, which has been running flat for several weeks. 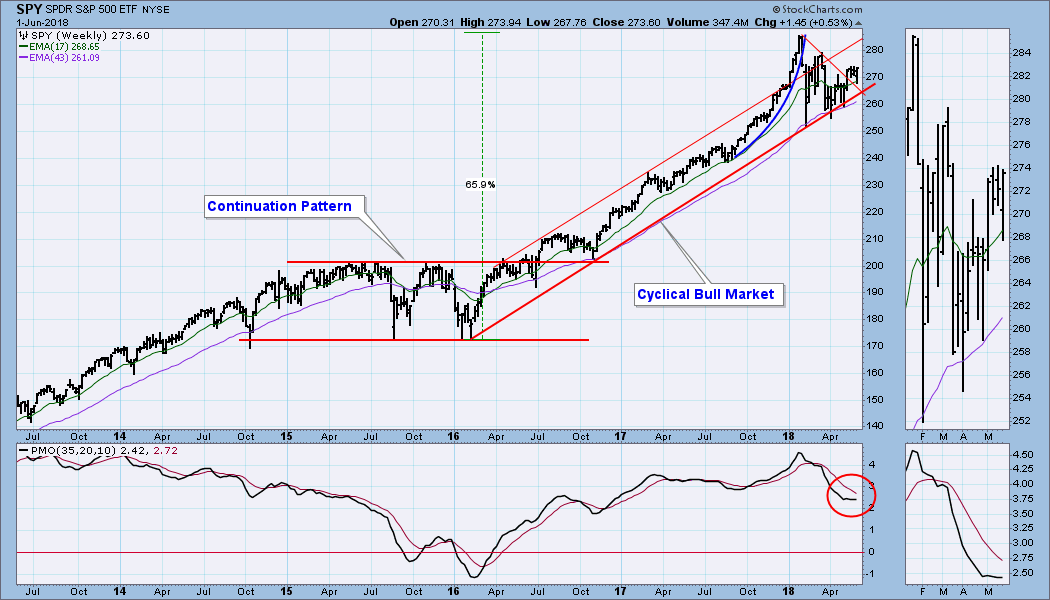 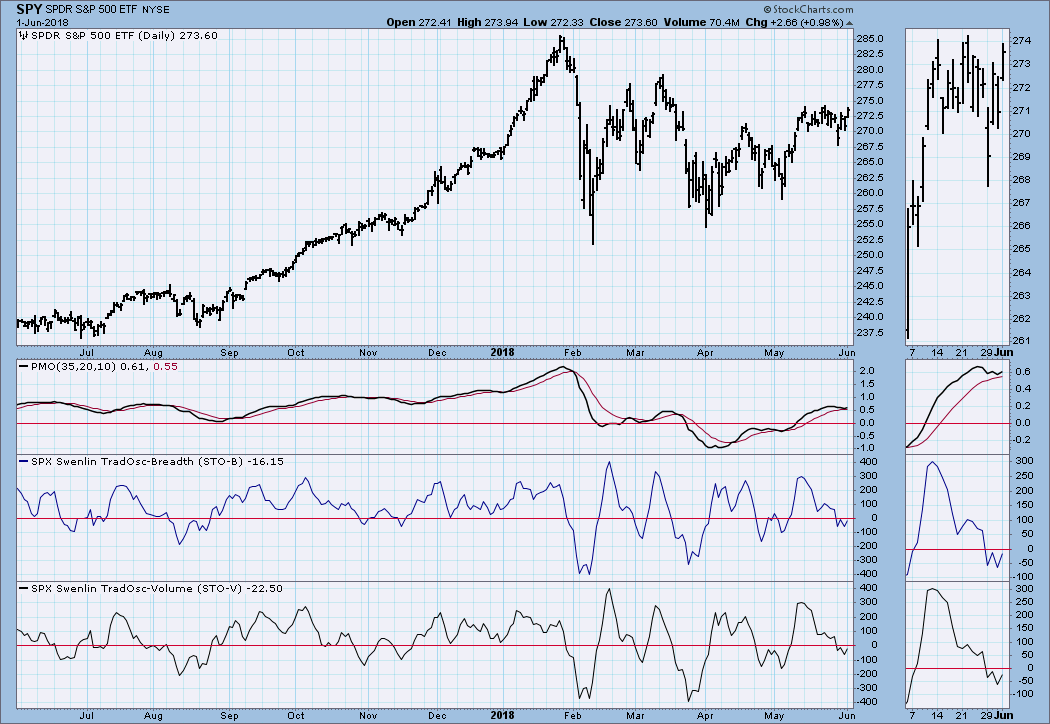 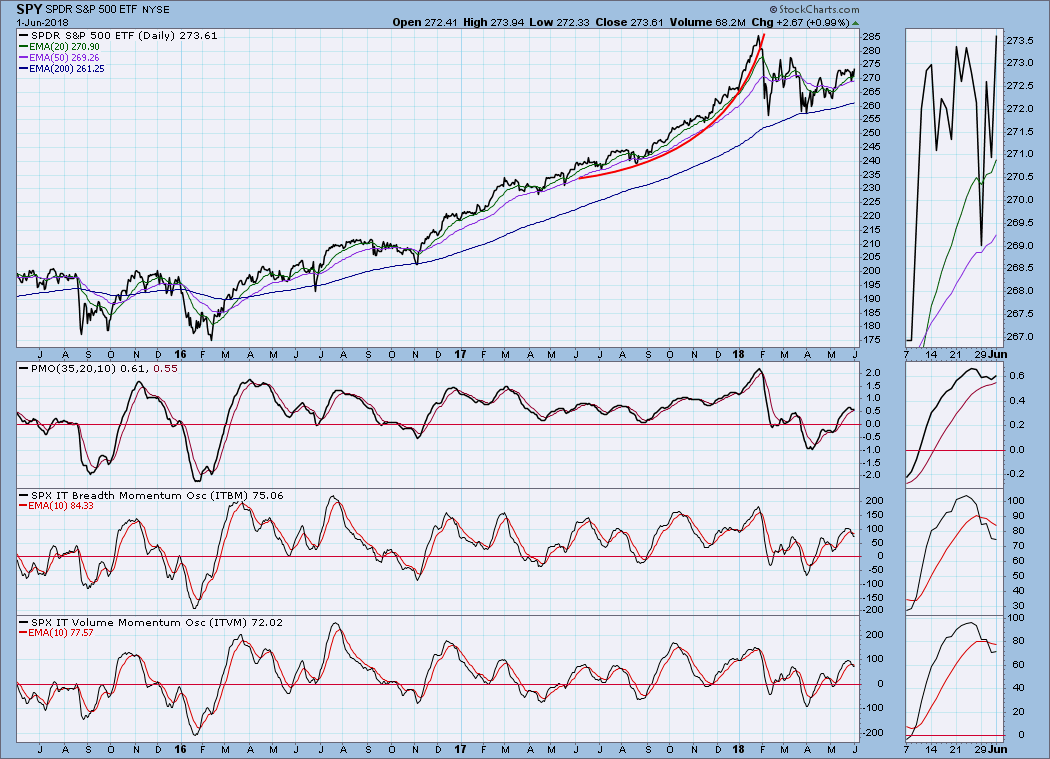 Conclusion: The market has been trending up since the April low. While it is not a vigorous move, the market shows a reluctance to decline and a very modest tendency to advance. Tuesday's decline is an example. Prices were down sharply during the day, but they eased up considerably before the close. Then the next day, prices rebounded. Nevertheless, other than Tuesday's short pullback, price remains within a three-week trading range.

As I said at the beginning of this article, the dominant feature on the daily chart is a large rising wedge pattern, a pattern that will most likely to resolve downward. Why do we normally expect that? Simply because the rising bottoms line is too steep and needs, at the very least, to be reset to a lower angle of ascent. A more serious decline could result, but, for the reasons I stated above, I don't expect that outcome at this time.

UUP Daily Chart: The daily PMO has topped and is overbought, so we may get a bit of a correction. 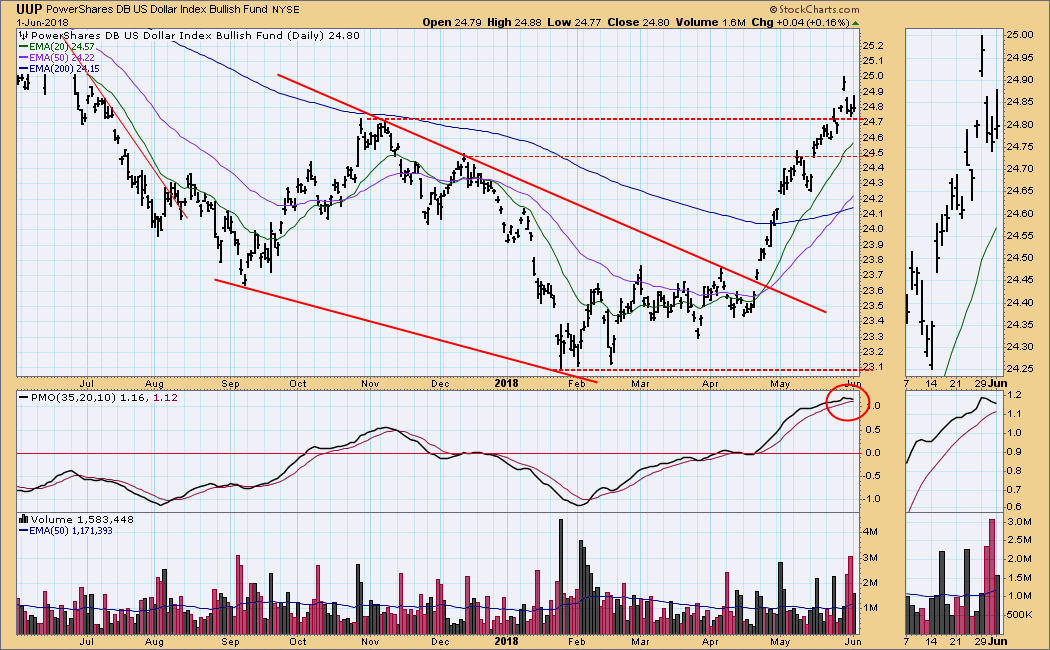 UUP Weekly Chart: I think the breaking out of the falling wedge has gone farther than just an adjustment to the down trend. 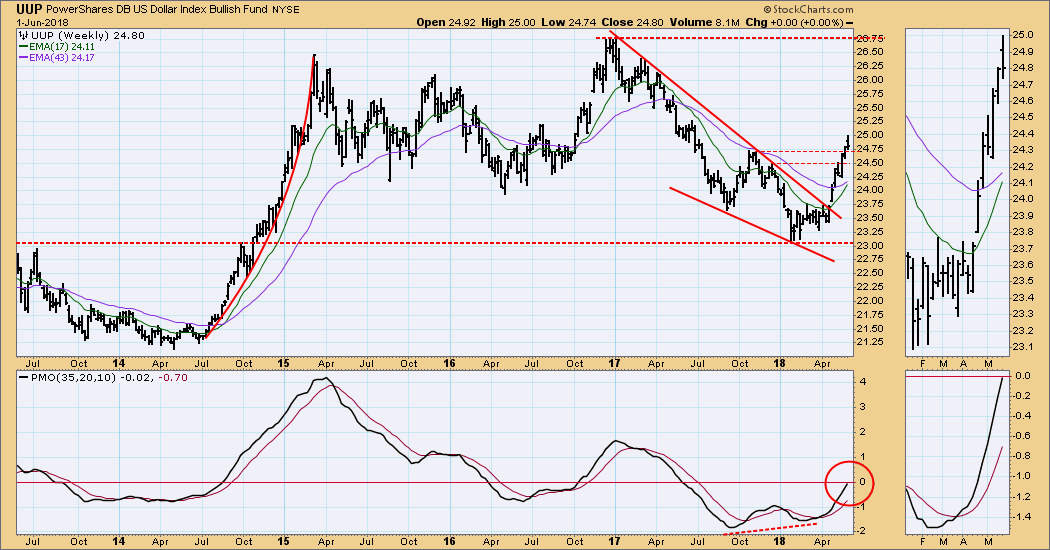 GOLD Daily Chart: Gold has suffered under the recent advance of the dollar, but the PMO has crossed above the signal line, and price has moved just above the declining tops line drawn from the April top. 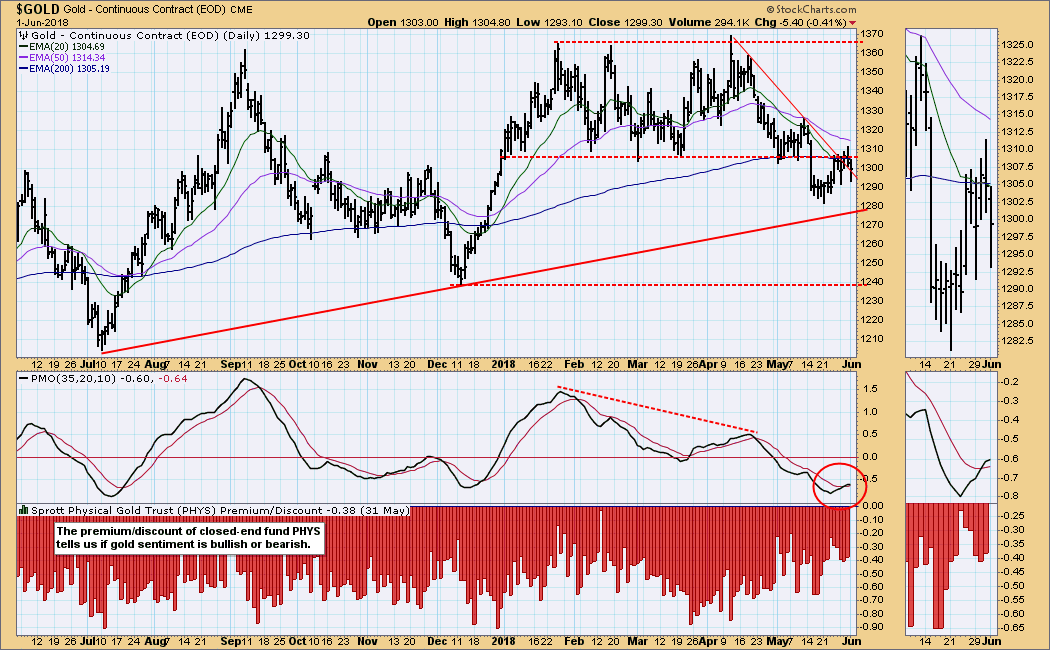 GOLD Weekly Chart: Owning gold for the last two years has been frustrating, but it is still positive in this time frame. 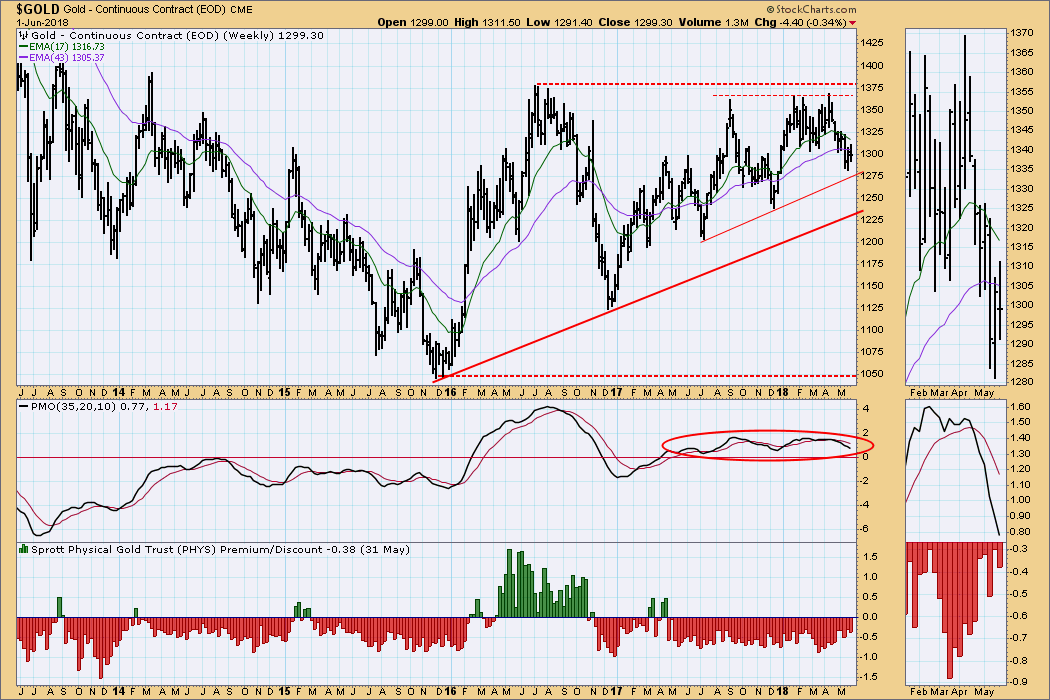 USO Daily Chart: Here's another great example of a rising wedge resolving downward. Now price has dropped slightly below the horizontal support line drawn across the January and March tops, but price has found support on the rising trend line. At this point, I am attributing the recent decline to the fact that the advance from the April low was just too steep to be sustained. Note that there was a similar process in December, January, and February. 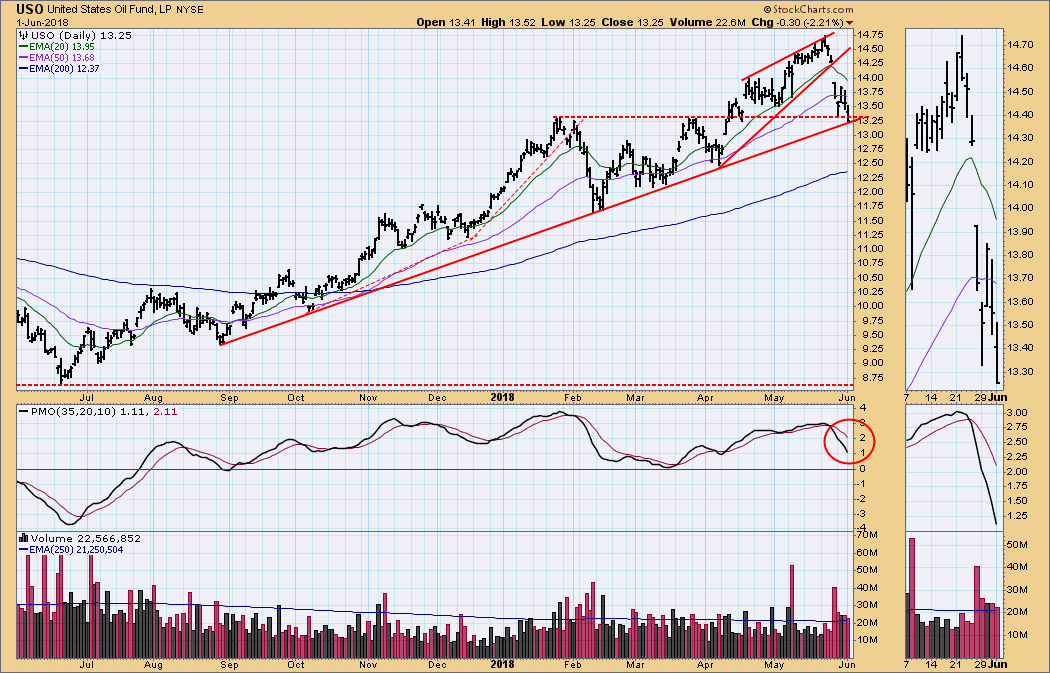 USO Weekly Chart: USO seems to be within a bullish context in this time frame, but the weekly PMO has topped and is overbought. I don't like the looks of this. 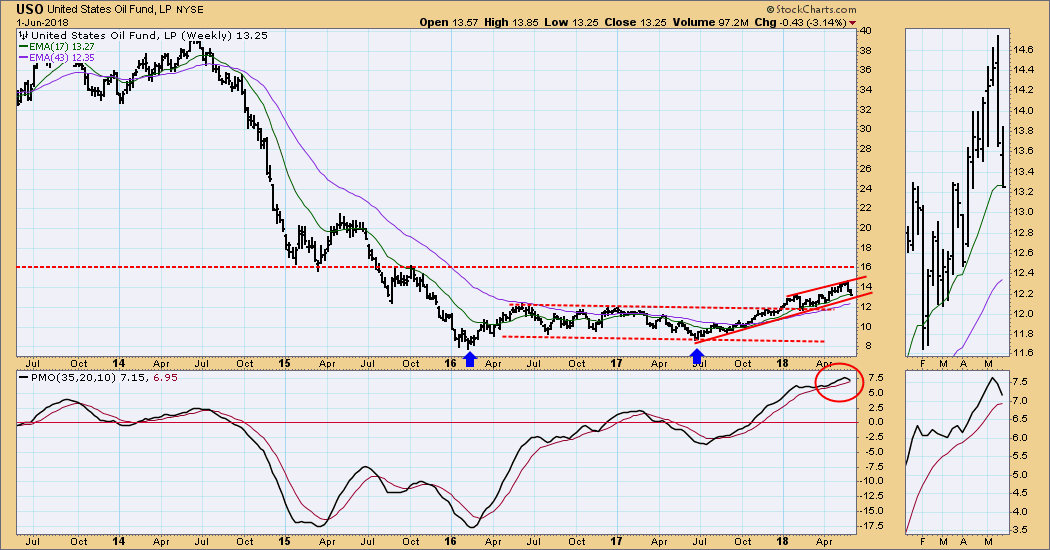 TLT Daily Chart: On Friday the 20EMA crossed up through the 50EMA, generating an IT Trend Model BUY signal. That seems to be in harmony with the double bottom setup with the February and May price lows, but the move above the confirmation line lasted one day, and a pullback is now in progress. 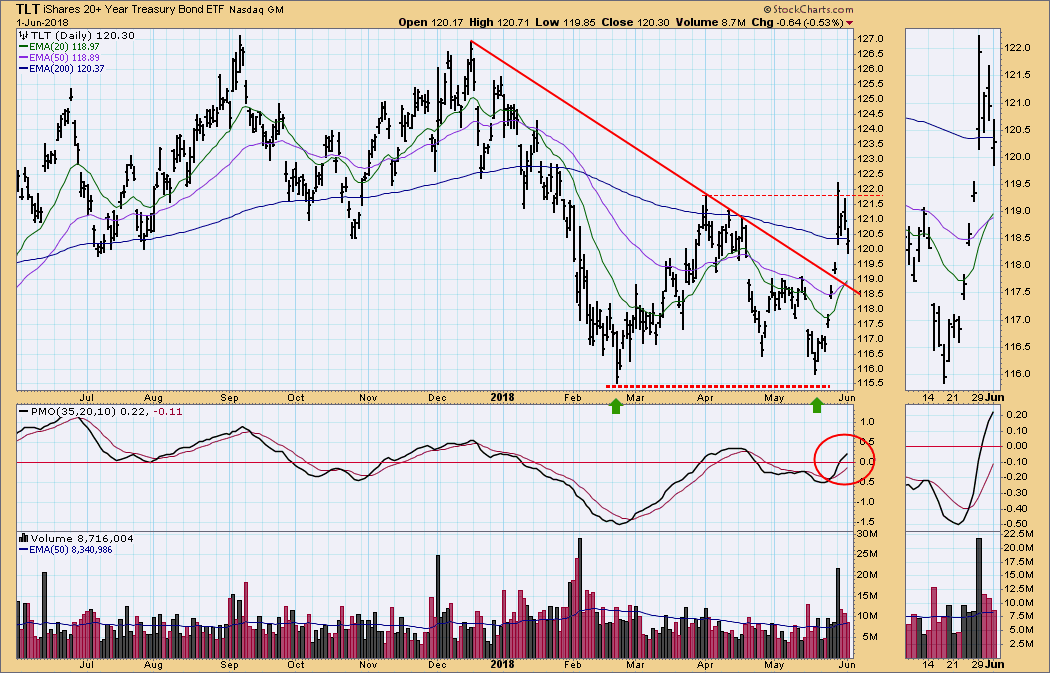 TLT Weekly Chart: The bearish head and shoulders pattern remains intact, but the weekly PMO has turned up, and I am beginning to lose confidence in the possible bearish outcome. 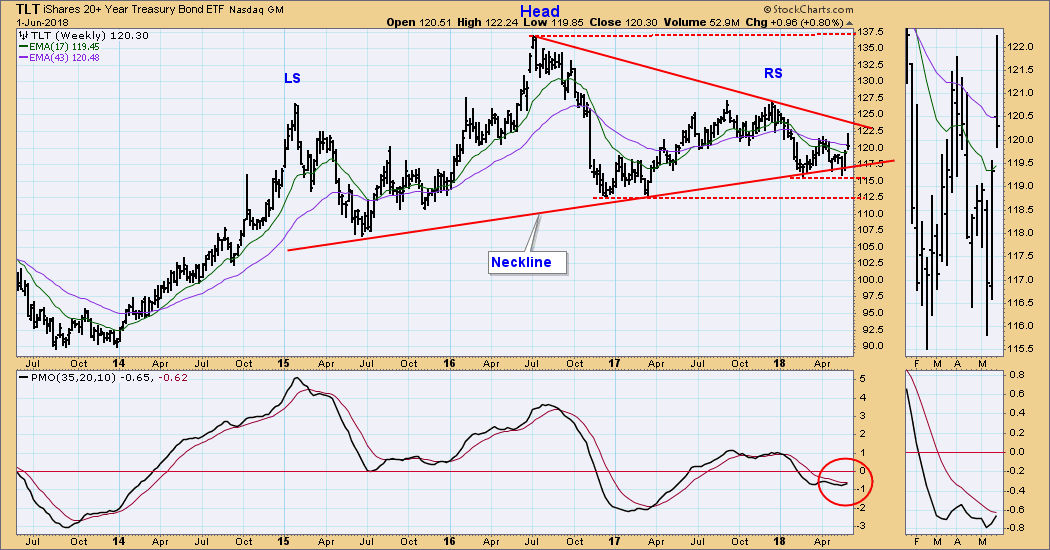