Last week I thought we had a good setup for a short-term market top and correction, but news of possible progress toward a resolution of trade issues with the EU spurred the market (SPY) higher to challenge all-time highs. Funny thing, though, there was no follow through on Thursday, and the market dropped on Friday after positive news of +4.1% GDP growth. Not to mention FANG darling Facebook crashing around -20% after earnings announcement Thursday, and Twitter losing -20% on Friday. What is going on? 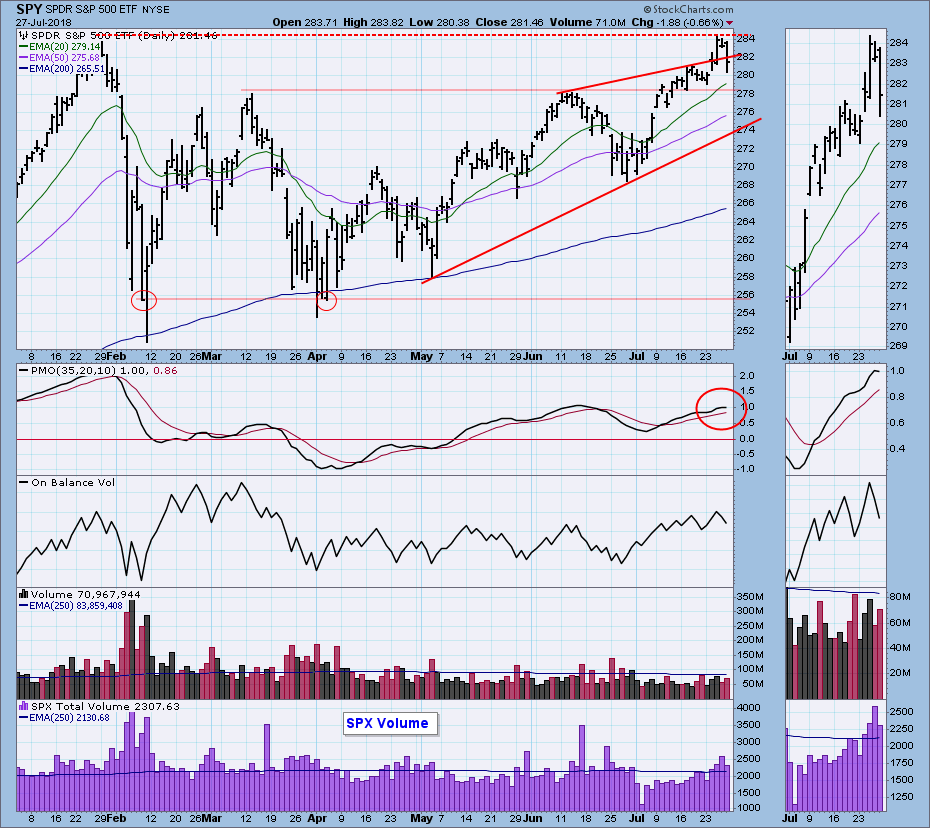 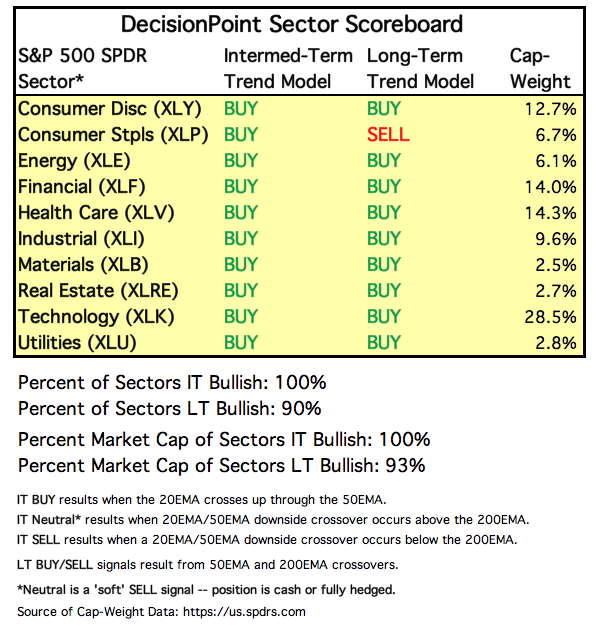 SPY Daily Chart: The daily PMO finally topped (a week later than I expected). I have left the rising wedge in place, even though price broke out of the top of it this week. If price continues down, I think the rising wedge dynamics will still be a factor. 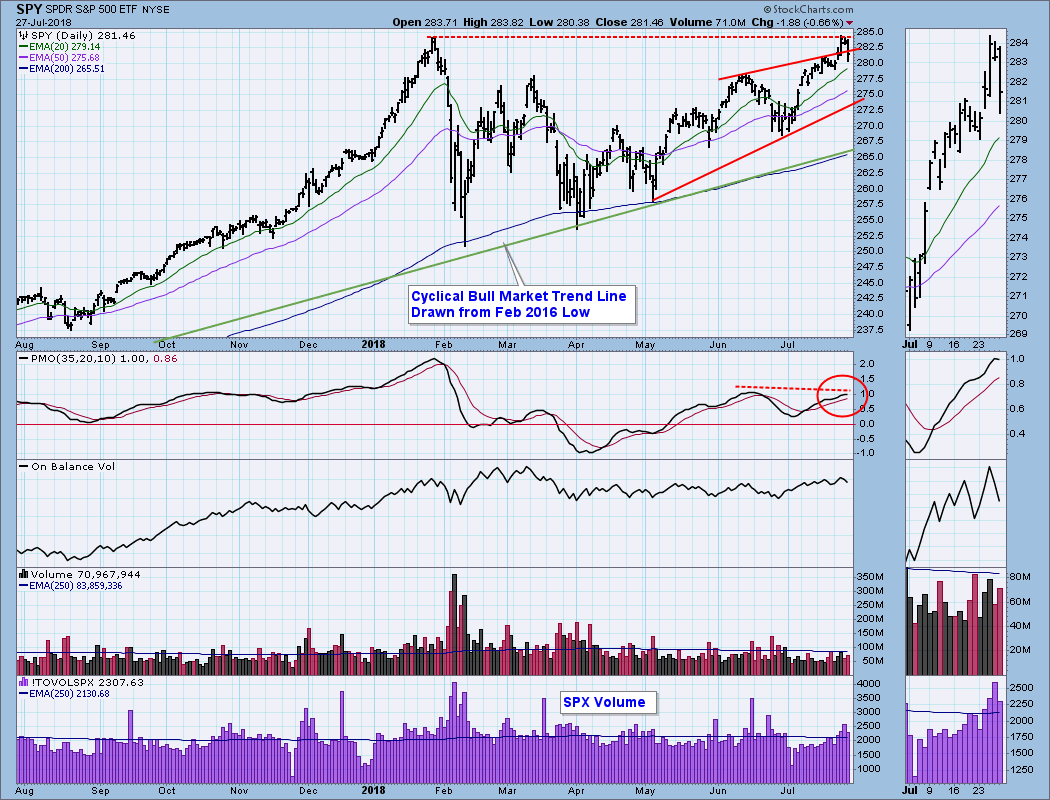 SPY Weekly Chart: SPY approached the top of the rising trend channel, and the weekly PMO has crossed up through the signal line. The only issue is that SPY closed in the lower half of the weekly range. 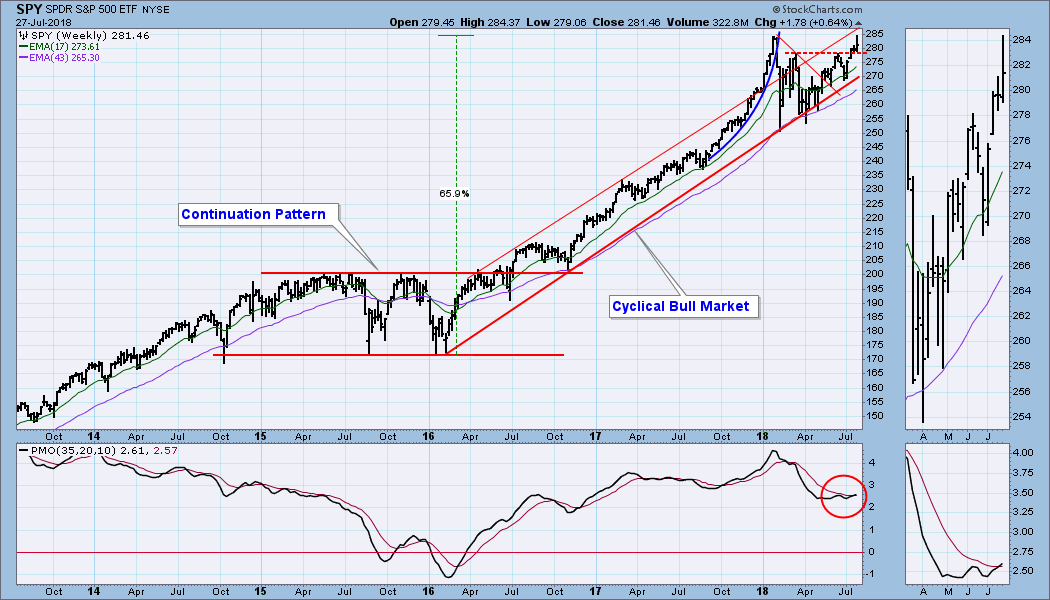 Short-Term Market Indicators: Last week these charts spoke strongly to me, pointing toward a short-term top and pullback. Didn't happen. This week they don't have much to say. 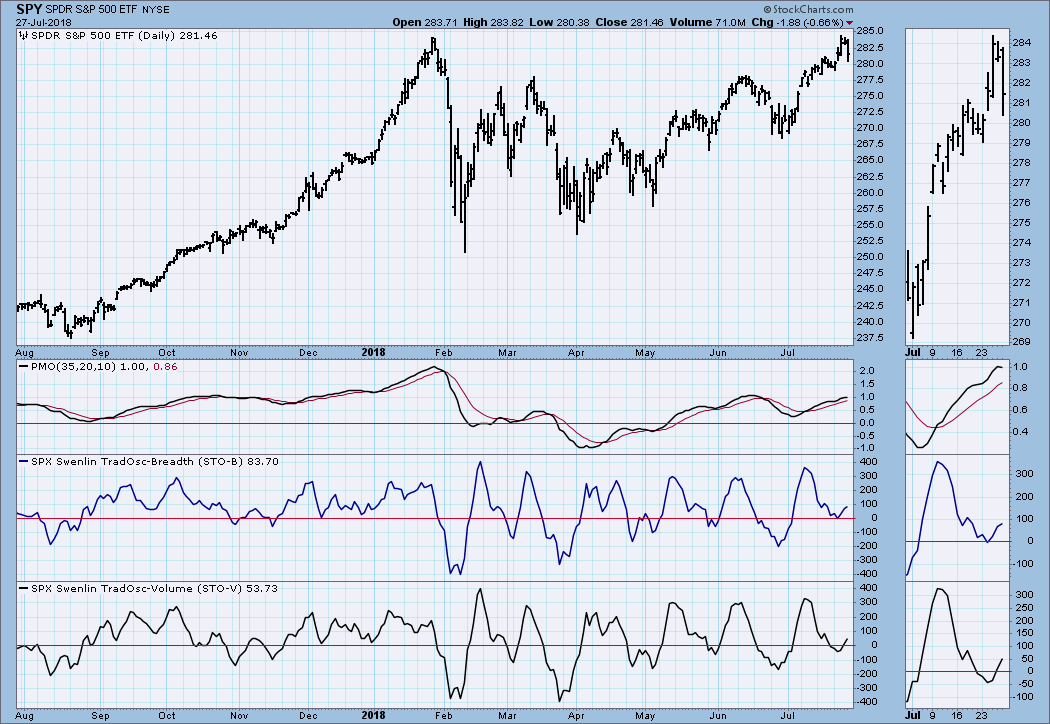 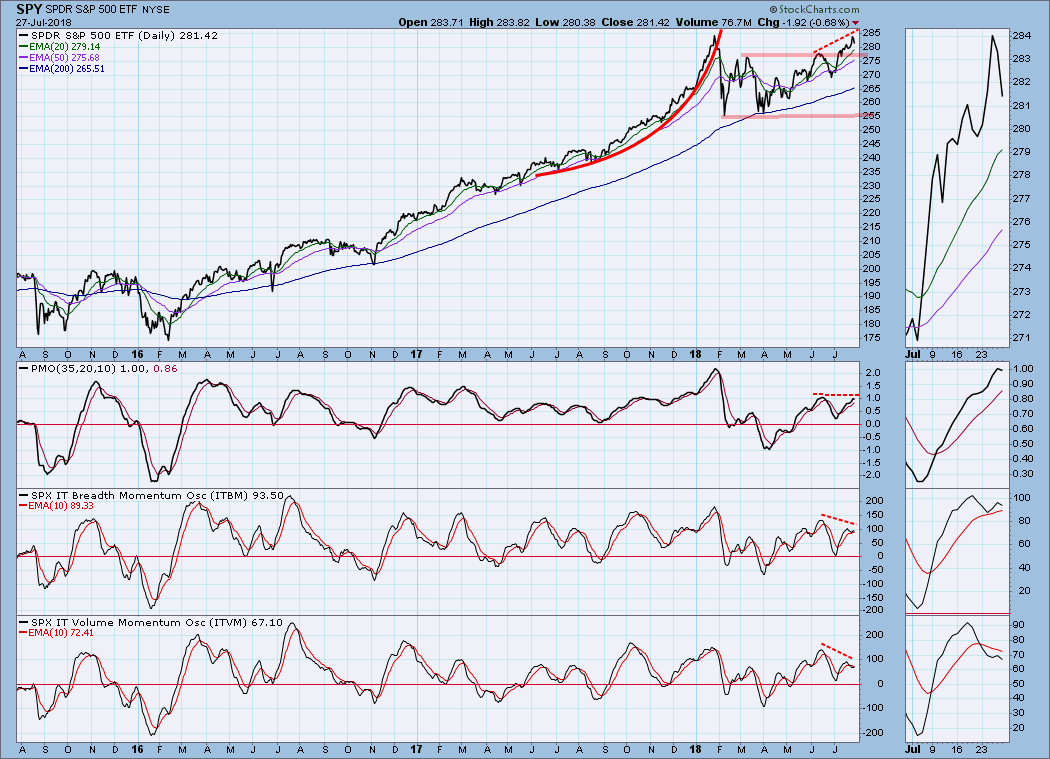 Conclusion: In the best of times the market can treat good news and bad news the same -- it rallies -- but now the market seems to be getting kind of cranky. Suddenly good news doesn't get as much positive reaction as we might expect, or the market appears to ignore it altogether. Earnings reports that fall short in some way can cause a stock to take a real beating, Facebook and Twitter being the obvious current poster children. These kinds of things can be early signs of bigger problems ahead. Also, there is the hype about which stock will be the first to reach a $1 trillion dollar market cap -- Amazon or Apple. When/if it happens, dive under your desk. Certainly as technicians we don't normally use news for specific trading decisions, but it shouldn't be ignored when assessing the broader market picture.

UUP Daily Chart: UUP has been slowly drifting higher for about two months. The PMO negative divergence makes me think that a correction is coming. 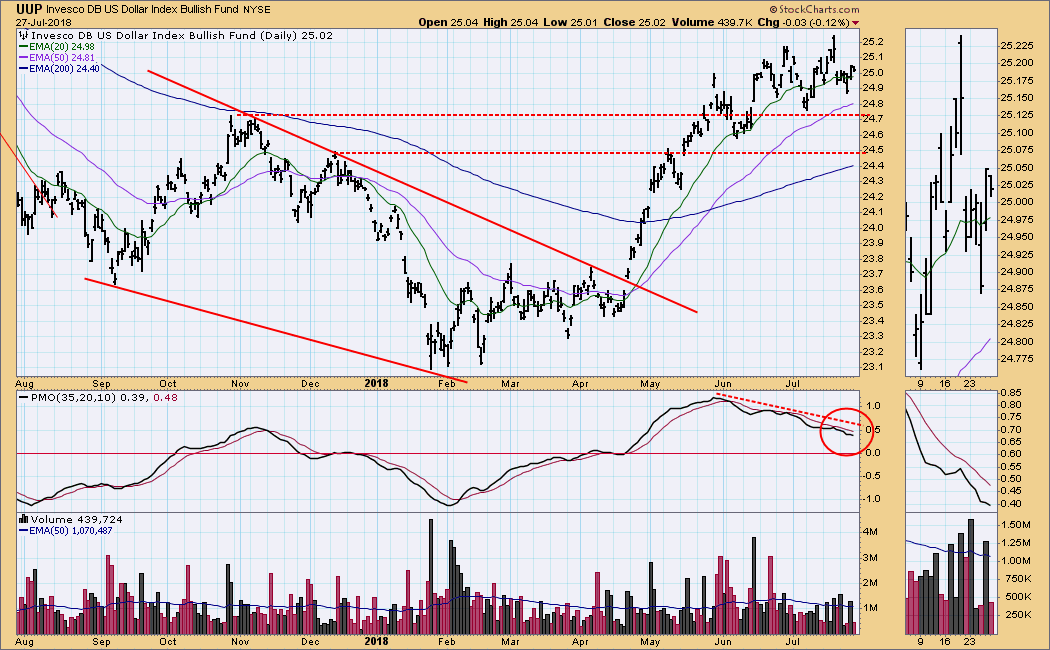 UUP Weekly Chart: The chart is positive except for the price deceleration, which I expect will lead to some trouble. 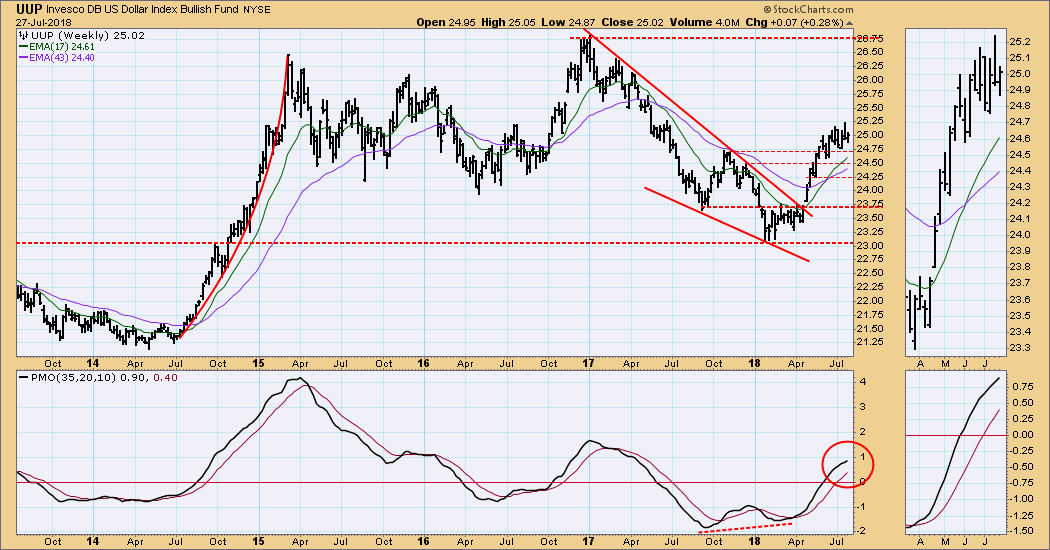 GOLD Daily Chart: Last week gold broke below the support at 1240, and this week it had a small snapback rally up toward the point of breakdown. Not surprisingly, sentiment has become more negative. 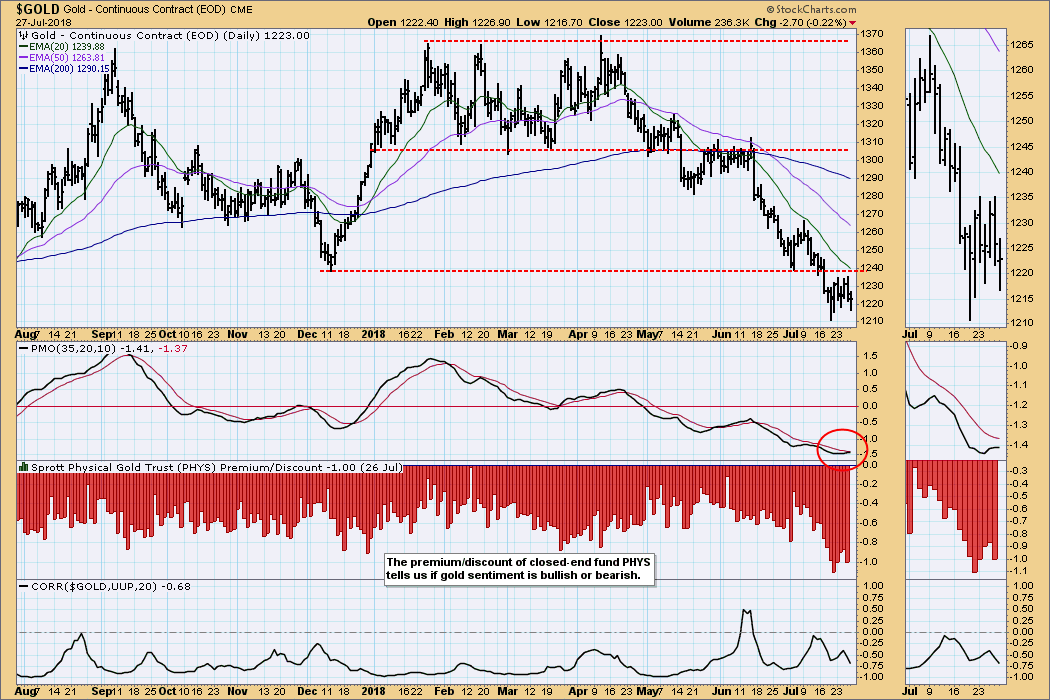 GOLD Weekly Chart: This chart is negative: The rising trend line has been violated, the weekly PMO is below the signal line and falling, and the EMAs are bearish. 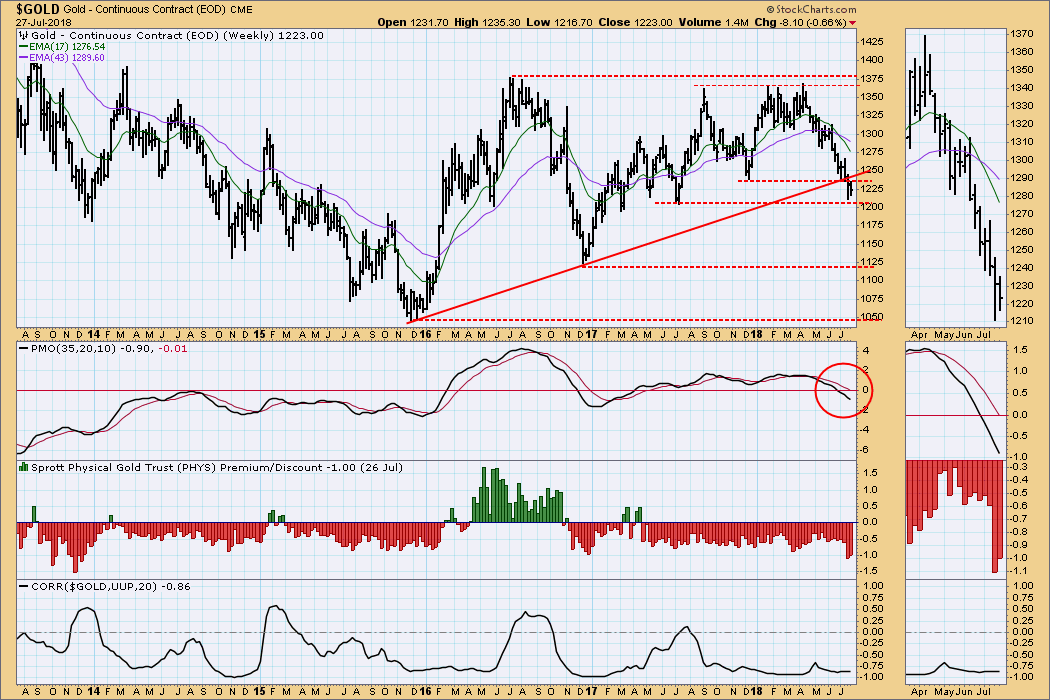 USO Daily Chart: USO has been rallying for two weeks, but Friday's decline caused the daily PMO to top below the signal line. This is bearish. 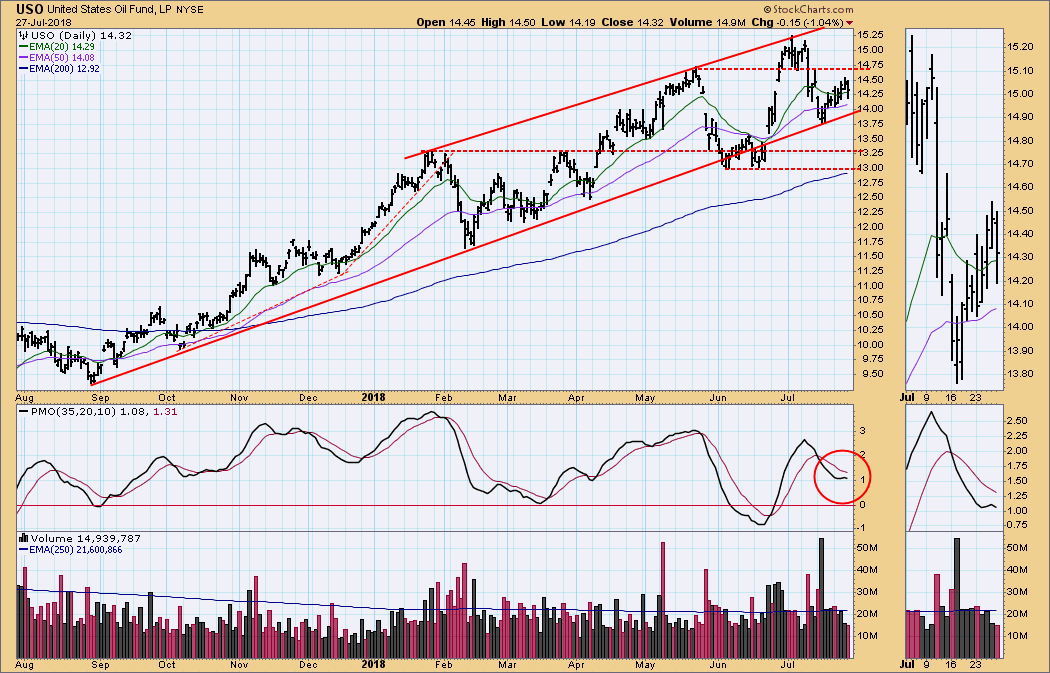 USO Weekly Chart: The rising trend is intact, but there is a negative divergence on the weekly PMO. Also, the weekly PMO has crossed below the signal line. 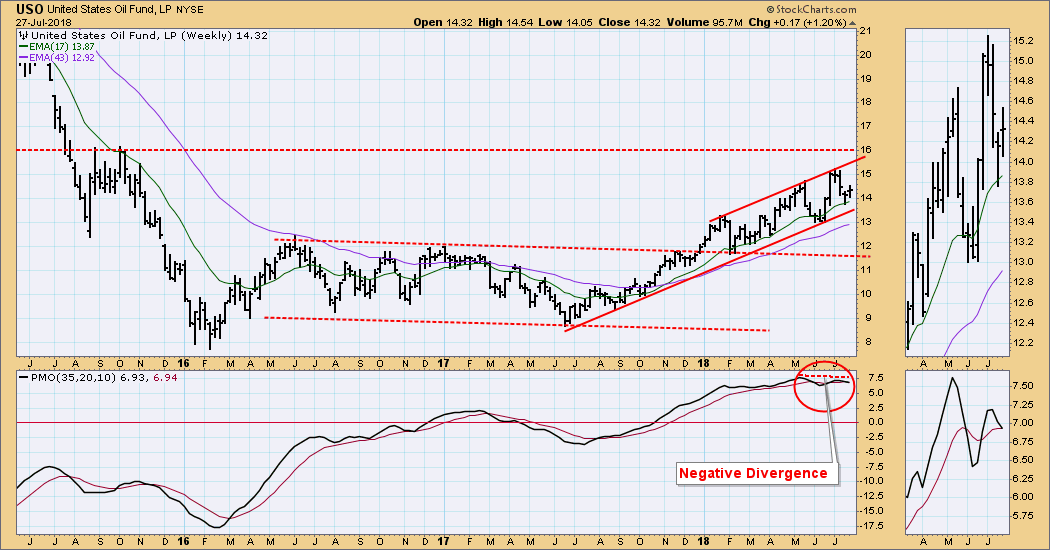 TLT Daily Chart: Last Friday TLT broke down from a short consolidation. It continued down on Monday, then consolidated for the rest of the week. The result is a reverse flag formation, which is considered to be bearish. Note that the 50EMA is about to cross back down through the 200EMA. This will probably happen next week, unless there is a bounce. The reverse flag suggests that the opposite will happen. 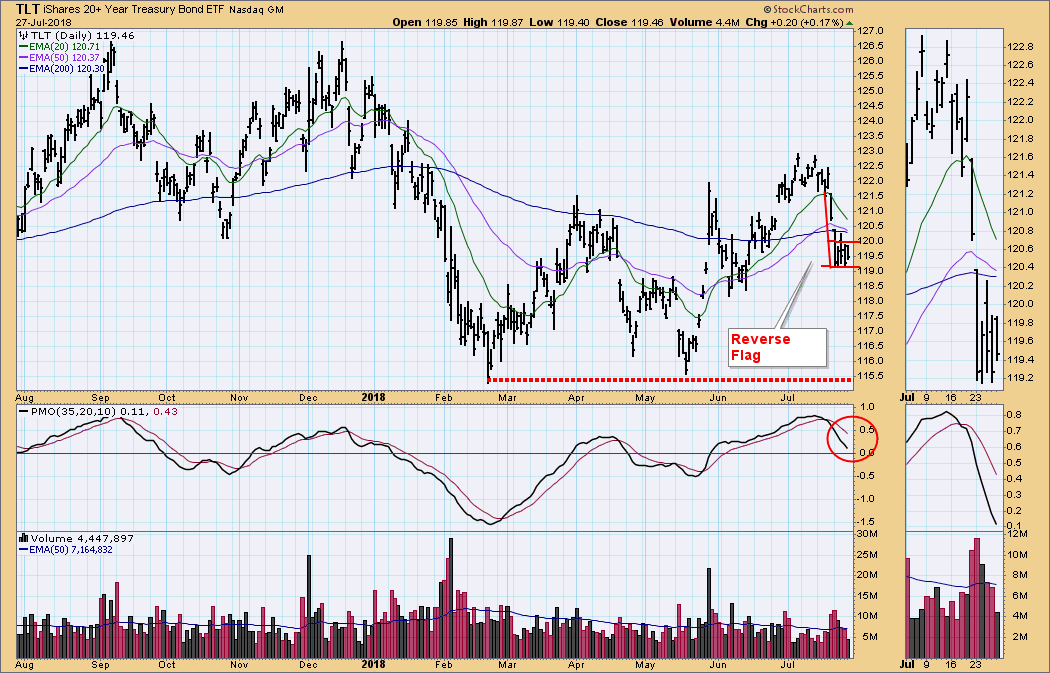 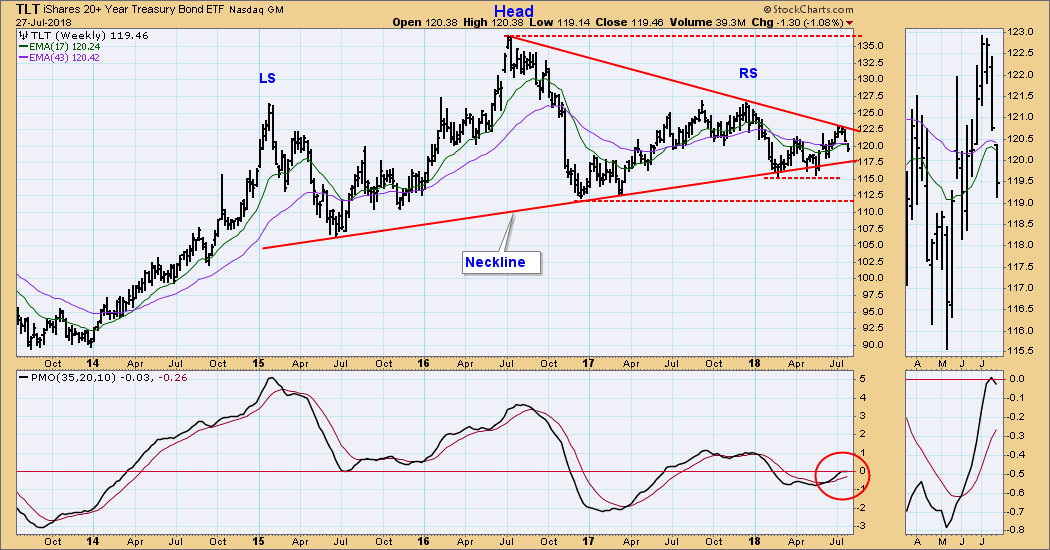