Despite a great rally on Tuesday, a sharp decline on Thursday took it all back, and the market finished the week barely changed. This was an options expiration week, so I think that probably had something to do with it. As of last week, I was expecting some chop in preparation for a retest of last week's low. Well, we got the chop, but I think the retest is yet to come, probably next week. We usually anticipate that a retest will result in a completed bottom, but that may not be the case this time. 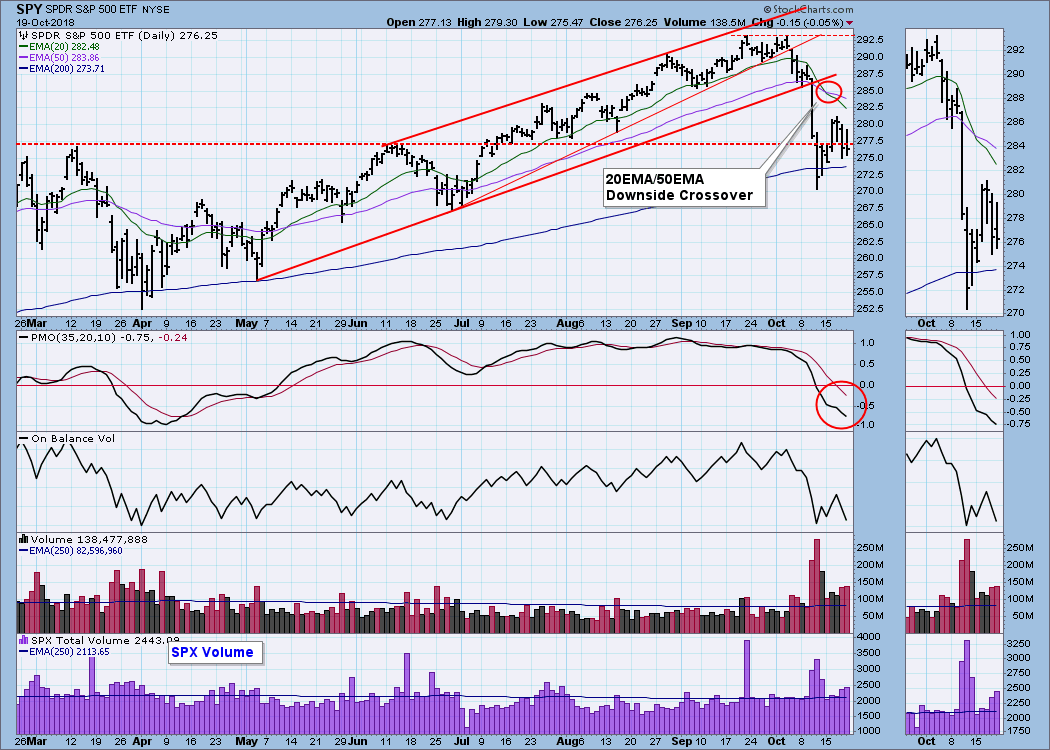 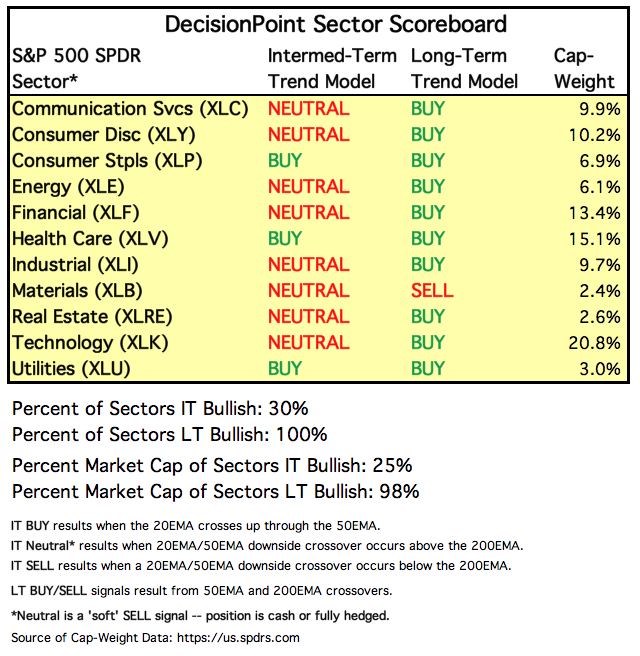 SPY Daily Chart: On Monday the IT Trend Model for SPY changed from BUY to NEUTRAL when the 20EMA crossed down through the 50EMA. A NEUTRAL signal is considered to be a soft SELL signal because the position would theoretically go from being long, then into cash or being fully hedged. A SELL signal (short) is only generated when the 20/50EMA crossover occurs when the 50EMA is below the 200EMA.

The VIX moved off the lower Bollinger Band, but it topped well below the 20SMA. This is not good because it shows that fear is in abundance as we approach a probable retest. 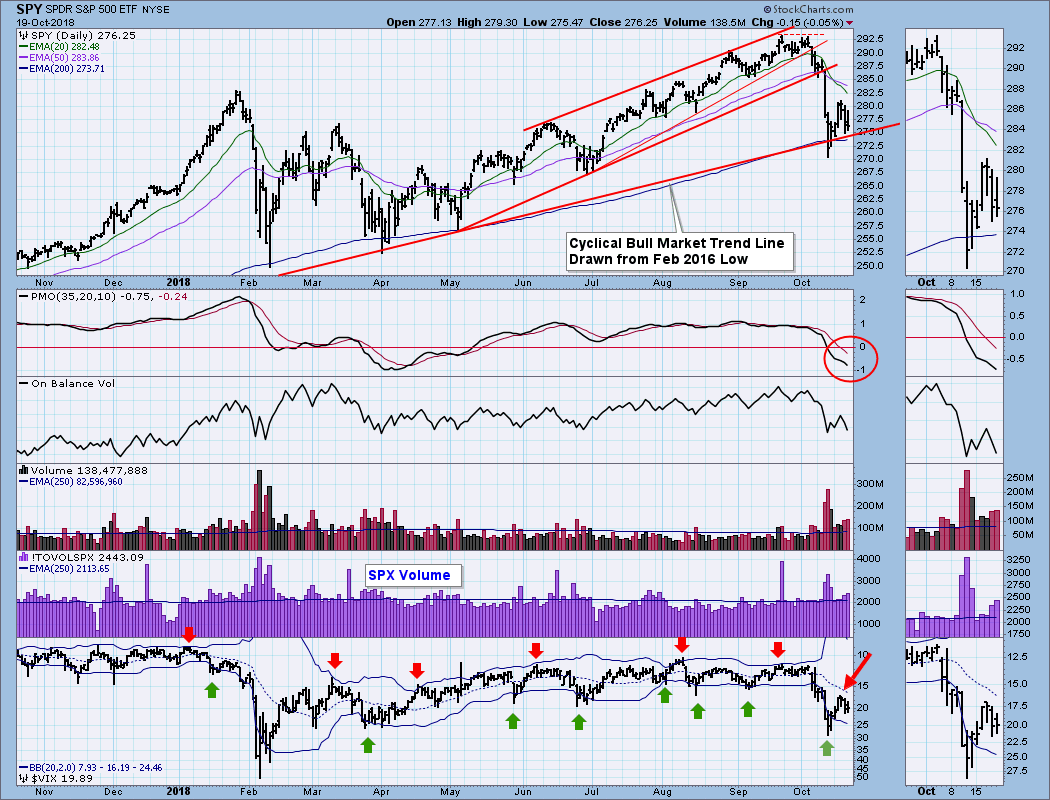 SPY Weekly Chart: SPY managed to stay above the rising trend line support this week, but the weekly PMO implies that lower prices are coming. 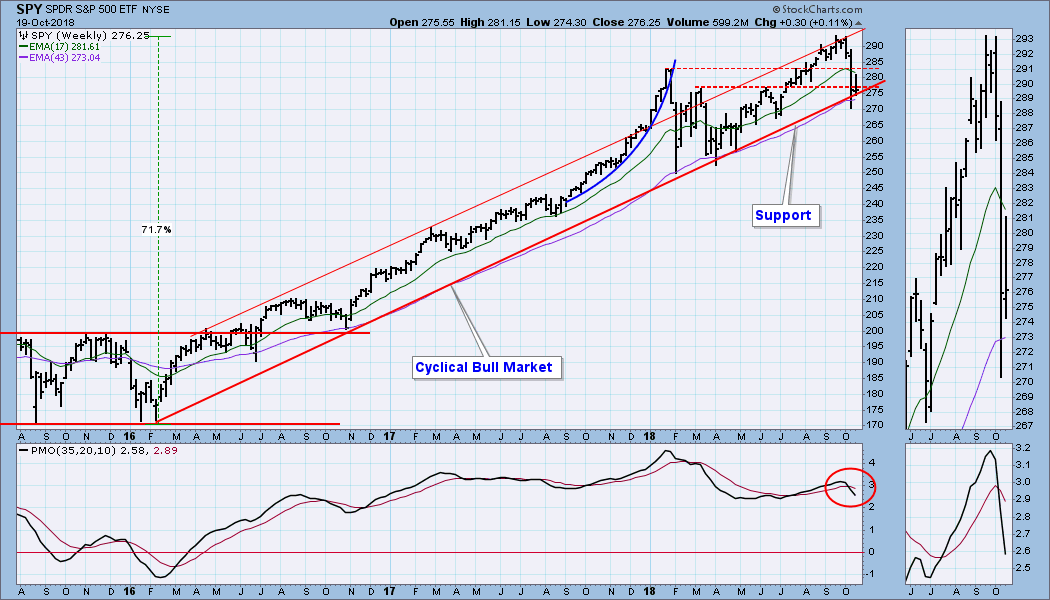 Short-Term Market Indicators: They are dead neutral and can accommodate a move in any direction. 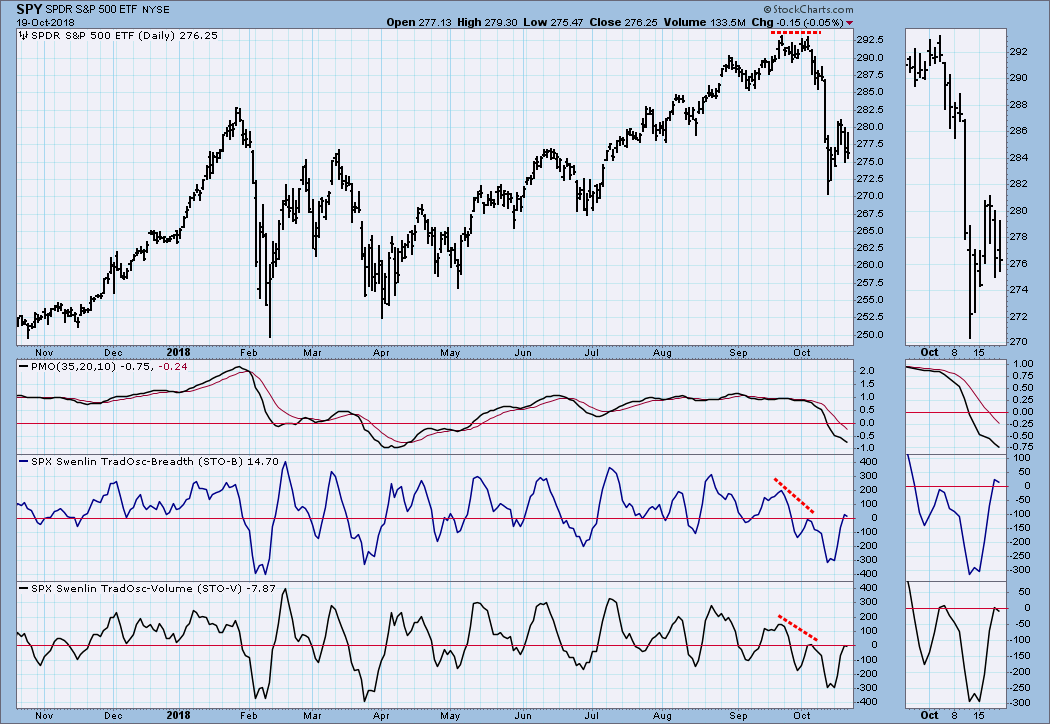 Intermediate-Term Market Indicators: All of these indicators are oversold based upon their range for most of the last three years. Let's wait to see what they look like after a retest. I have added the BPI to this chart because I want to watch it more closely for a while. For what it's worth, only 36% of S&P 500 stocks have their 20EMA above the 50EMA. That's quite a bit worse than the BPI at 43%. 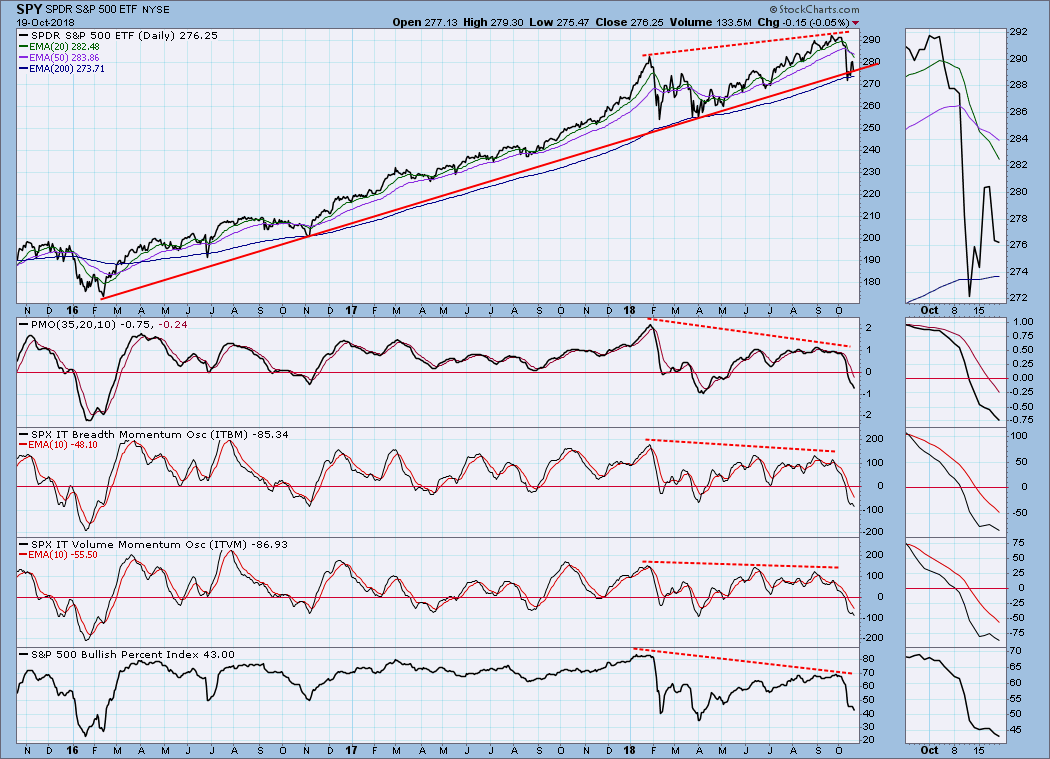 CONCLUSION: I try to follow the rule that, if you ask question in the title, you should answer it in the article. So, are we in a bear market yet? My technical definition of a bear market is that the 50EMA is below the 200EMA, so, no, it isn't a bear market yet; however, the 20EMA is below the 50EMA, and that raises the caution flag. More specifically, it is not a good time to be opening new long positions, and, as usual, use stops (or other discipline) for closing longs.

As I said earlier, next week I think the market is set up for a retest of last week's lows. I would not be surprised it the retest failed.

UUP Daily Chart: In order to establish a rising trend from the September low, UUP needs to move above the price high set earlier this month. The highlighted portion of the daily PMO is a configuration that implies that momentum is stalling. 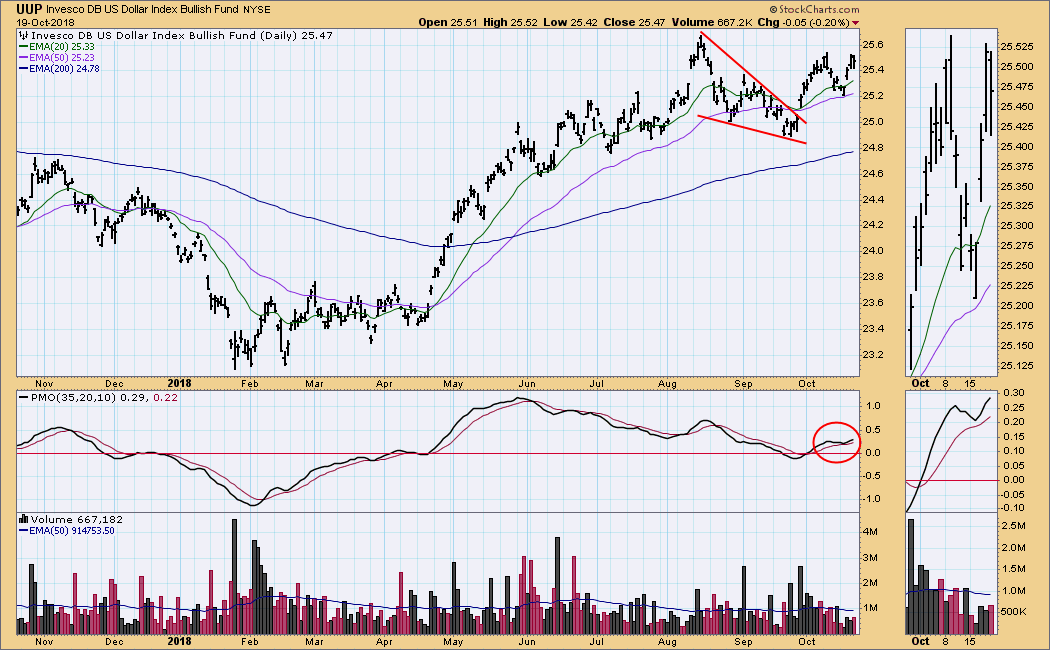 UUP Weekly Chart: Note that the weekly PMO has been running flat for several months. This type of formation normally resolves downward, eventually, but there seems to be an underlying determination to resist decline. 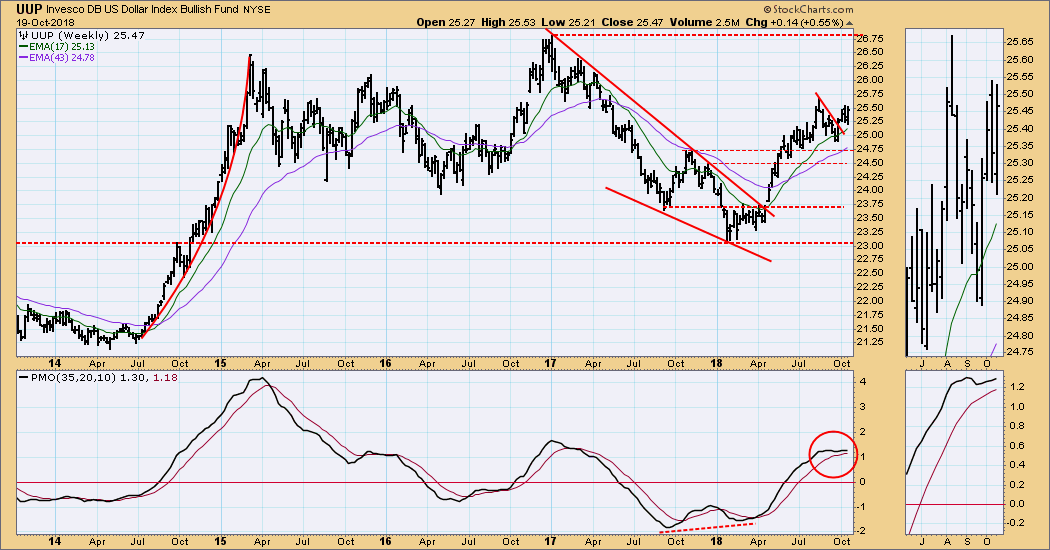 GOLD Daily Chart: Gold is slowly building a bullish case. After a solid breakout, gold has moved into a bullish a flag formation, and the daily PMO is above the zero line and rising. But the big deal today is that the 20EMA crossed up through the 50EMA, generating an IT Trend Model BUY signal. The thing last needed is for sentiment to turn positive, because a rally will not be sustained if sentiment remains bearish. 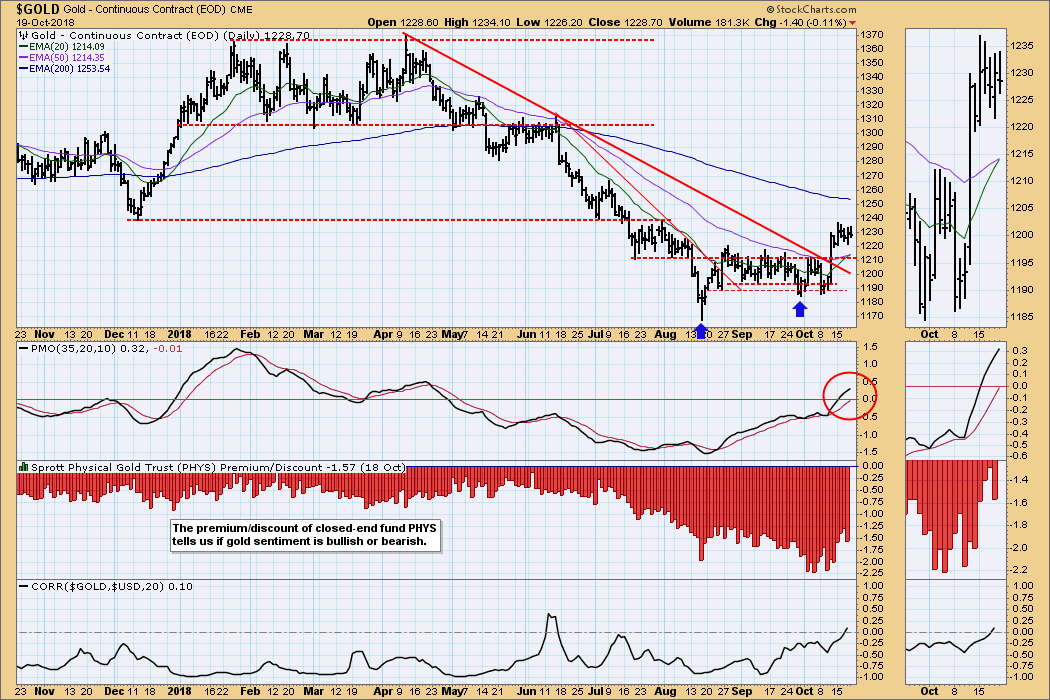 GOLD Weekly Chart: The picture remains modestly positive -- the weekly PMO has turned up from relatively oversold levels, and there has been a price breakout. 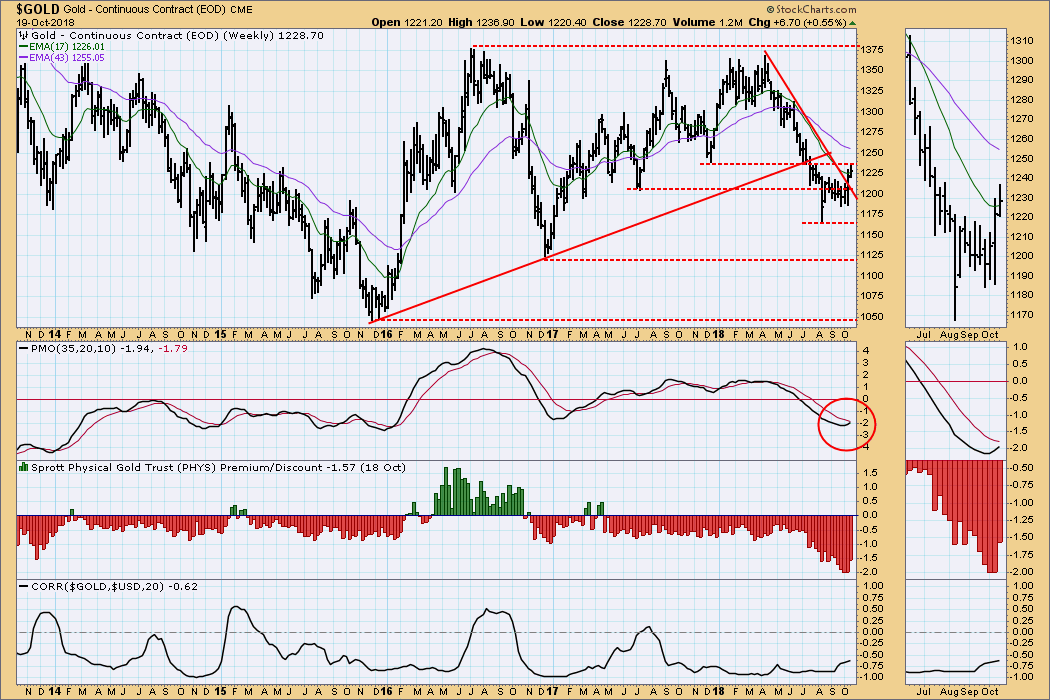 USO Daily Chart: The trend has been down since USO hit a high earlier this month. The Saudi Arabia troubles may have something to do with it, but we were expecting a pullback anyway because of looming overhead resistance (see the weekly chart). 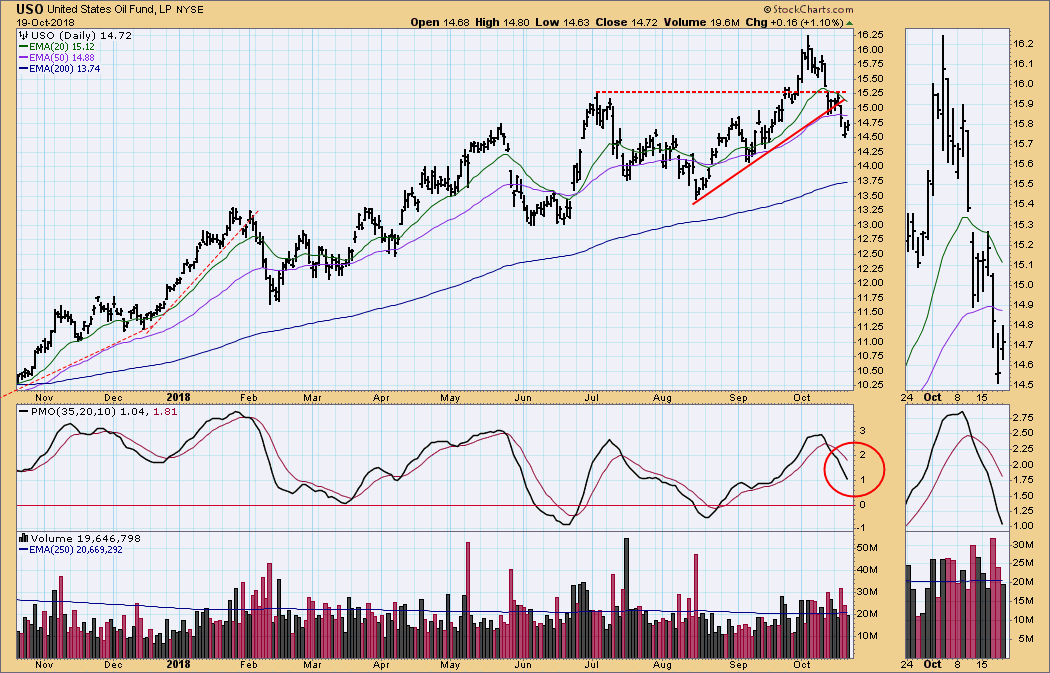 USO Weekly Chart: Crude ($WTIC) has more or less leveled out at about $77. I don't expect that the negative Saudi news will have any effect on the price of crude -- people will buy Saudi oil regardless. 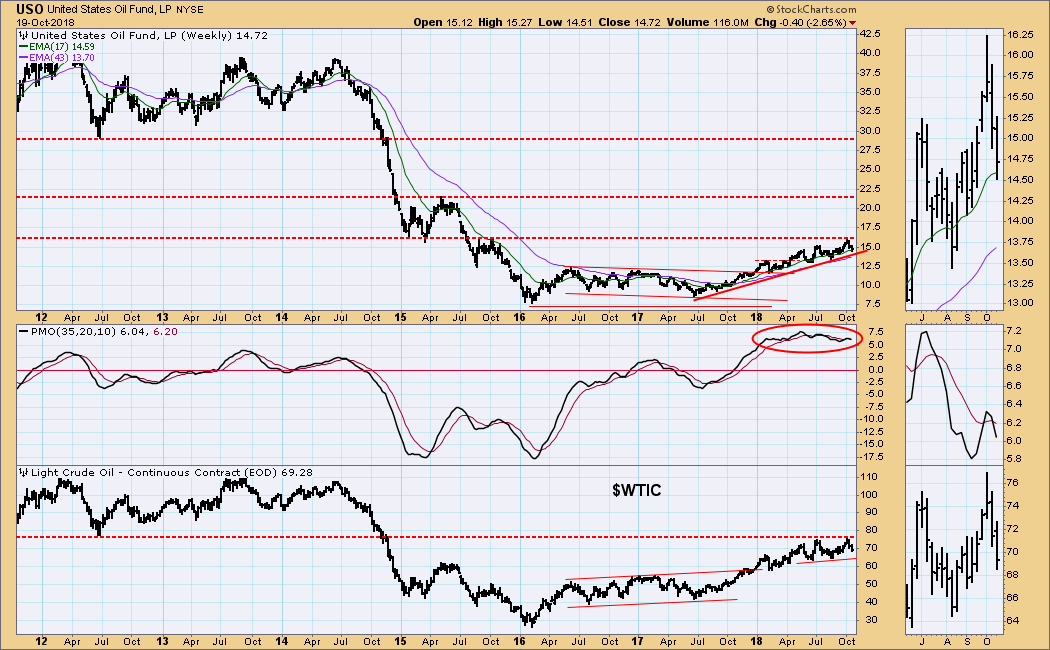 TLT Daily Chart: After TLT hit a post-breakdown low earlier this month, there was a reaction rally back to the failed line of support. Price is headed down again, and the daily PMO is trying to top below the signal line, which is usually viewed as a bearish event. 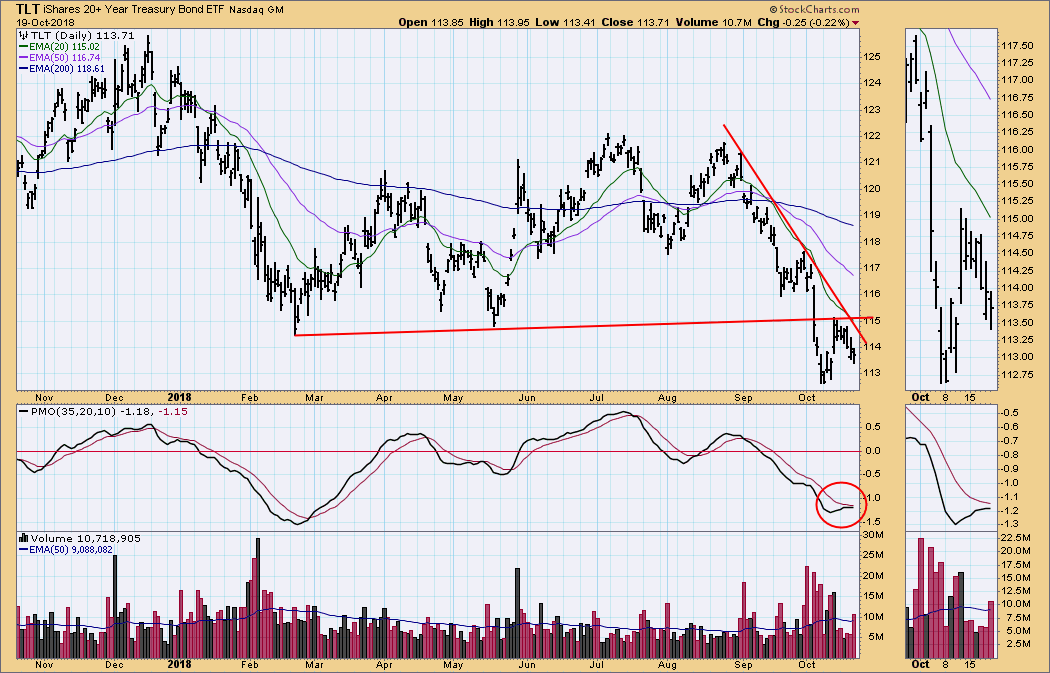 TLT Weekly Chart: The breakdown from the head and shoulders was 'decisive' (-3% or greater), and the obvious pattern since the breakdown is a bearish reverse flag/pennant, so I assume that the down trend will continue. 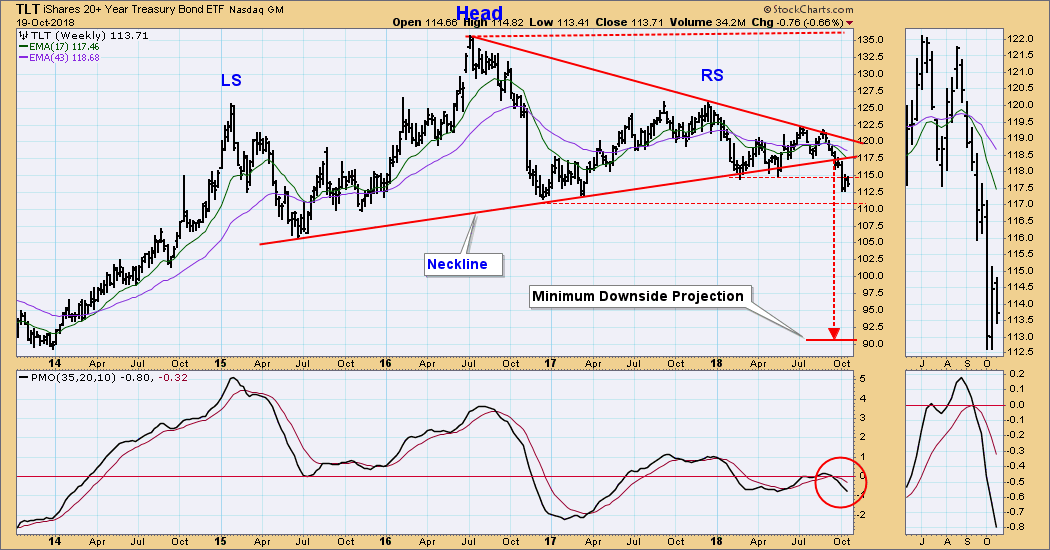