Lots of new BUY signals are appearing on the DecisionPoint Scoreboards in the short-term timeframe. This is good news for bulls, but I don't think they can breathe easy just yet. This rally reminds me of the last big rally we had in October that was not fueled by heavy volume. That rally failed. Today volume on the SPX was just under average. I would expect a day that finally released pent up bullish energy would have produced at least above average volume. Pundits are saying that the 'scared' money hasn't re-entered and that is why volume was low today. 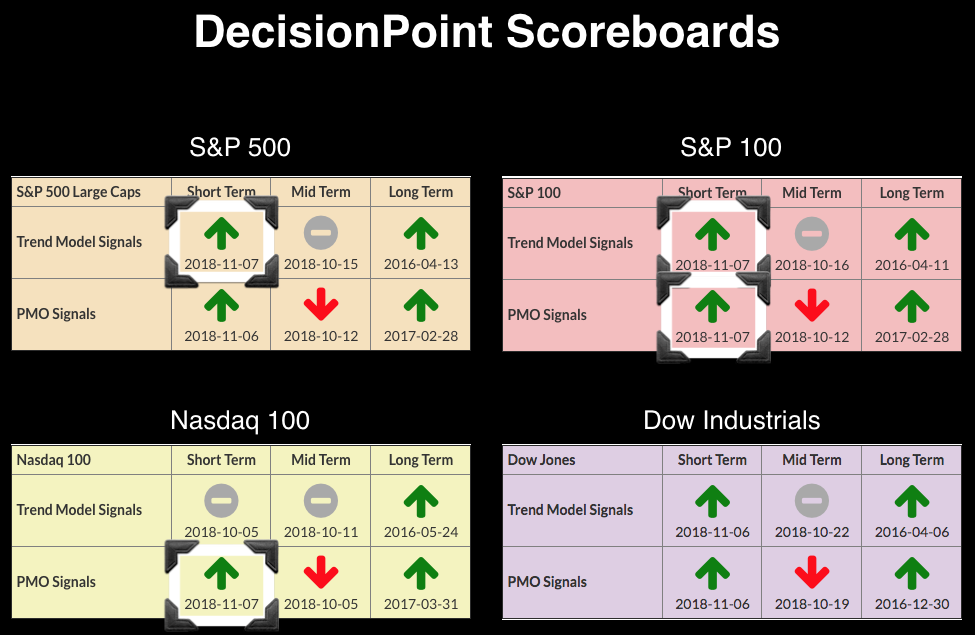 Let's start with the NDX chart. Technology was the darling today, finishing well ahead of the sector pack alongside Healthcare at a gain of almost 3%. The PMO has crossed above its signal line. We also see the NDX readying for a positive 5/20-EMA crossover. That crossover would give the NDX at ST Trend Model BUY signal. 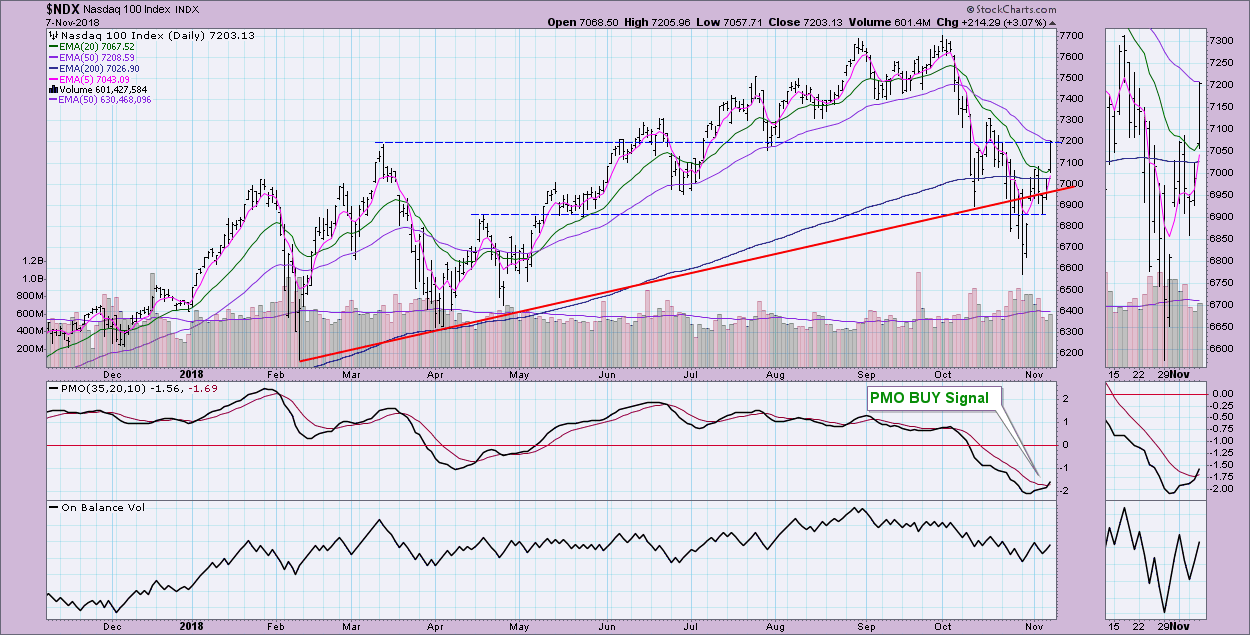 The OEX finished well above resistance at the Feb/Mar tops. Next up is tackling the January top. The OEX also generated a new ST Trend Model BUY signal today. 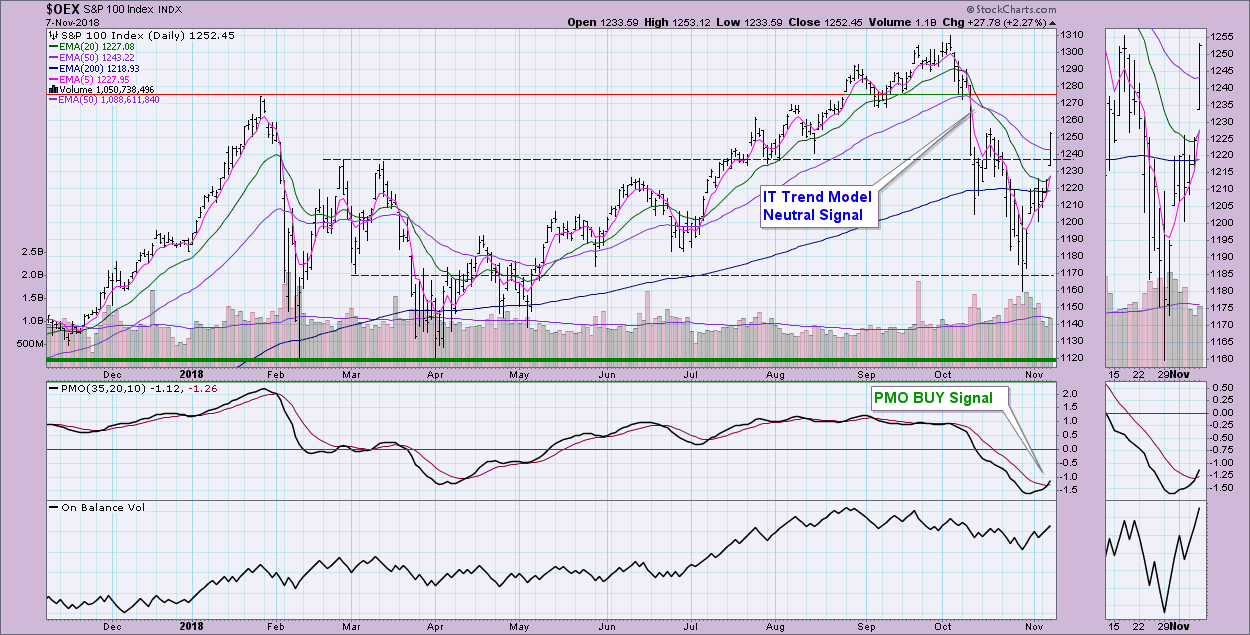 I wrote this morning about the two new BUY signals on the Dow that came in yesterday after the close. Like the OEX, it blew away resistance at the February top and September lows. 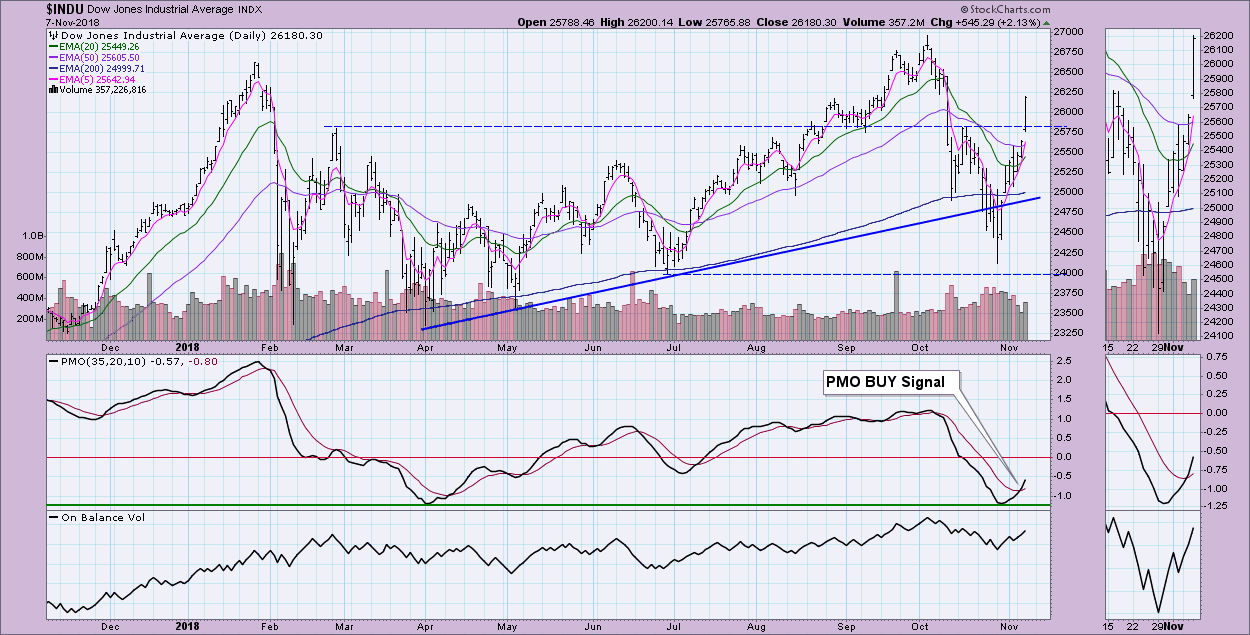 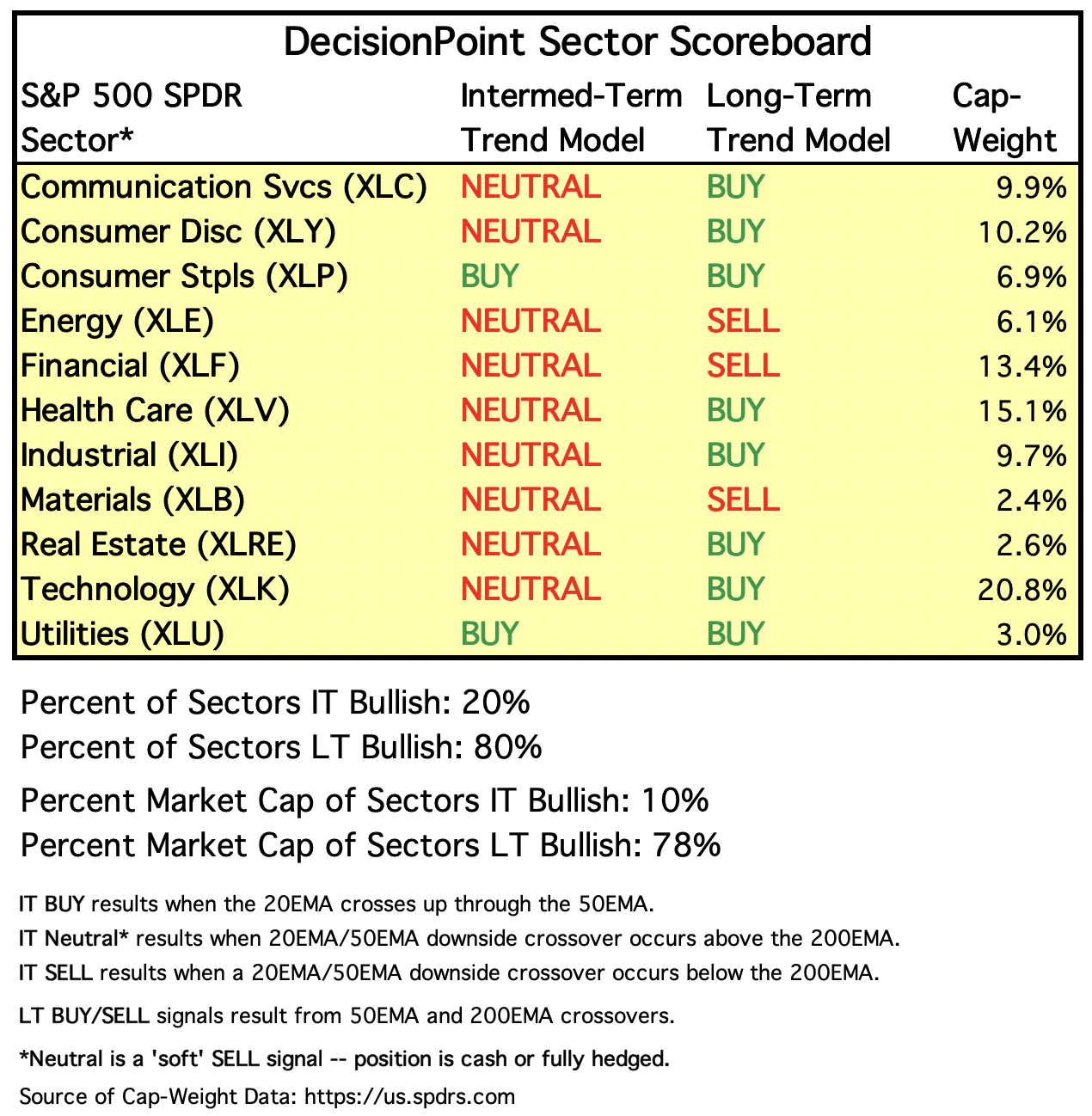 SPX Daily Chart: The SPX also broke above overhead resistance at its March top and August lows. A ST Trend Model BUY signal joins the PMO BUY signal that came in yesterday after the close. This rally is very encouraging, but volume (like the last big rally day) finished just under its 50-MA. I wouldn't say we're on our way straight up from here. More participation will be needed and a likely pullback is ahead. 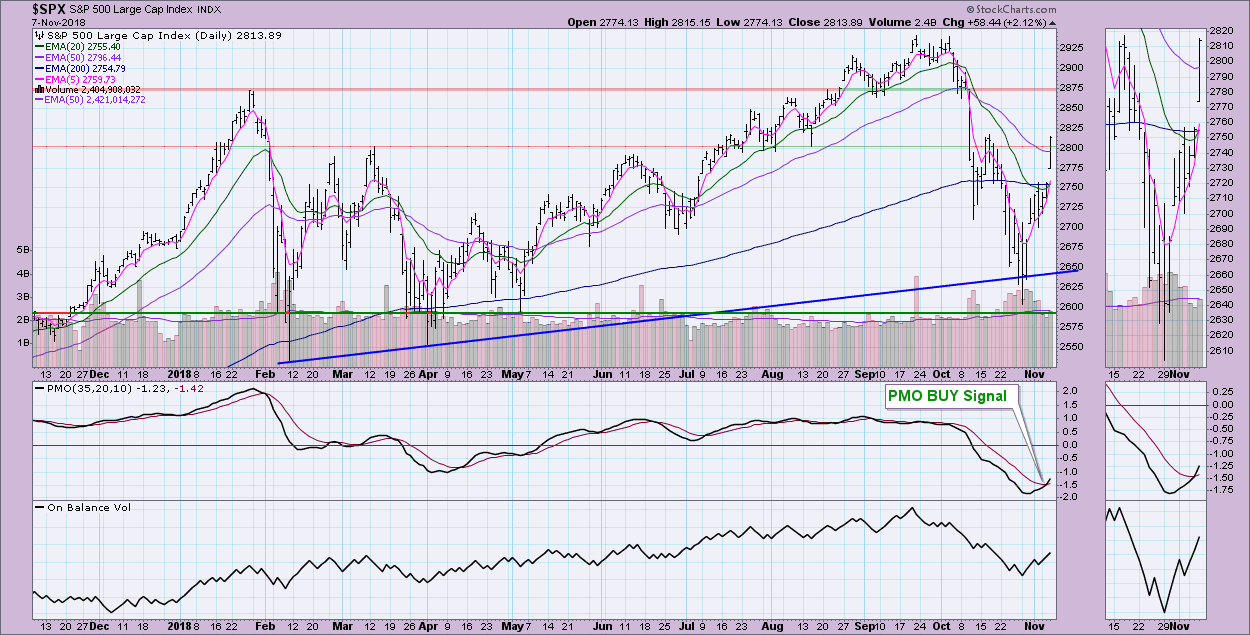 Ultra-Short-Term Market Indicators: We've seen an increase in Net A-D over the past three days, hitting its highest reading today. The VIX nearly closed above its upper Bollinger Band. This looks like a buying exhaustion. I'm expecting lower prices into the end of the week or at least a closure of today's gap. 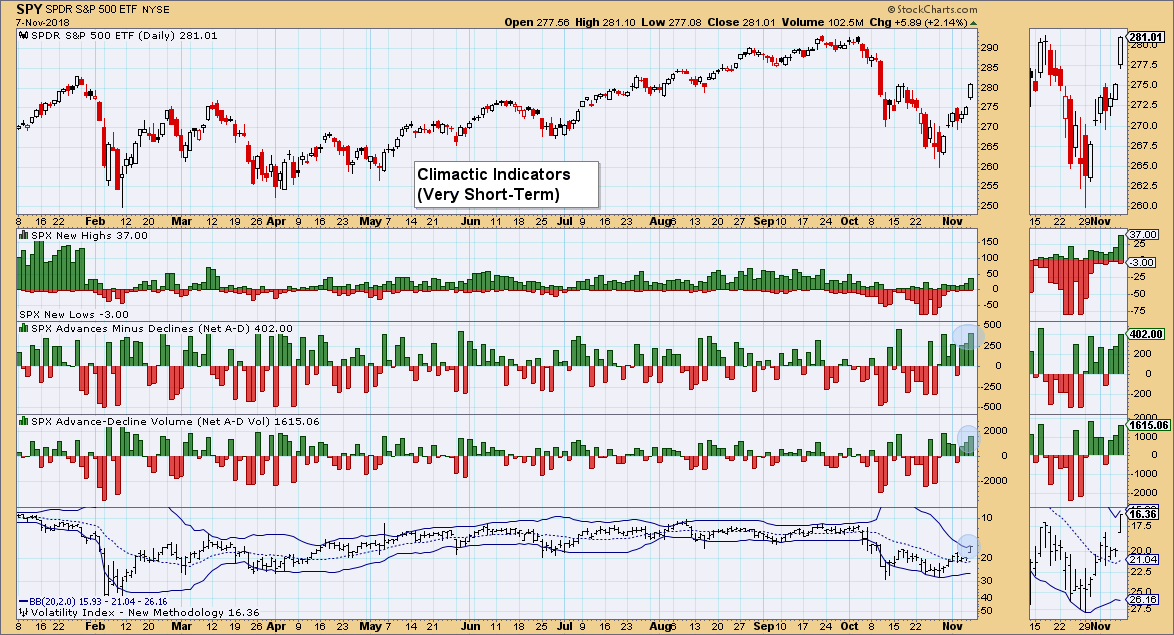 Short-Term Market Indicators: These indicators are very overbought, reaching levels not really seen since the last correction recovery in February. Note that the February tops preceded a price decline. However, a decline isn't always the result as we saw the last two times readings were this high, prices weren't hurt. 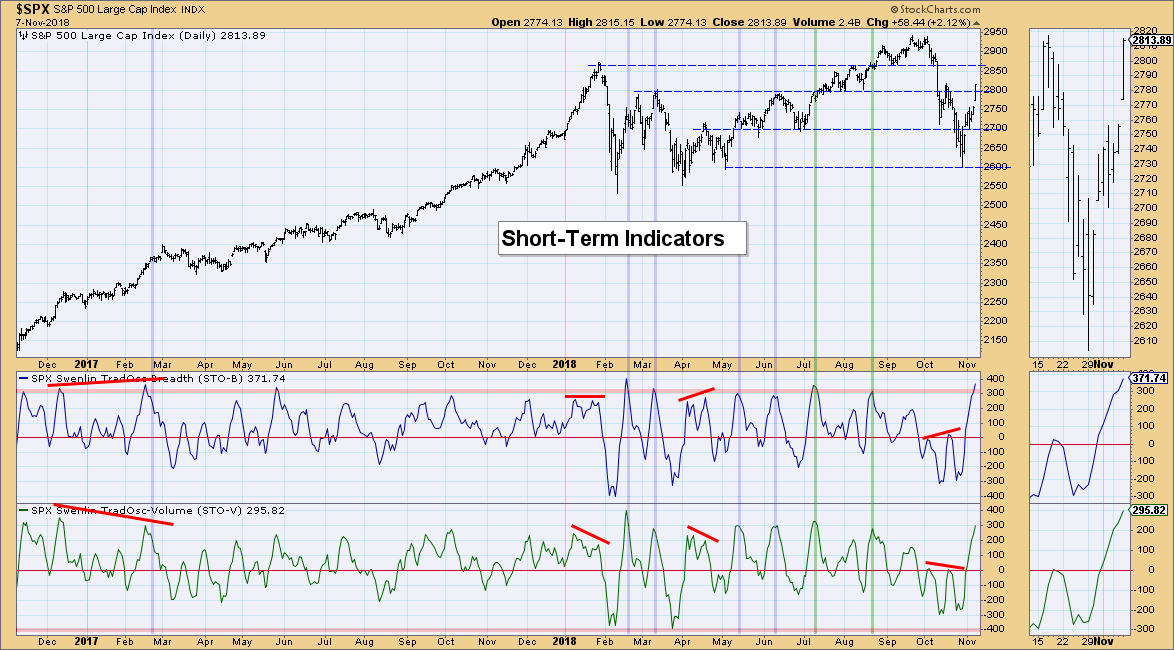 Intermediate-Term Market Indicators: These indicators bode well for the intermediate term. They also could suggest that the bull market is back on. I'll feel better when they hit positive territory, but overall they are bullish. 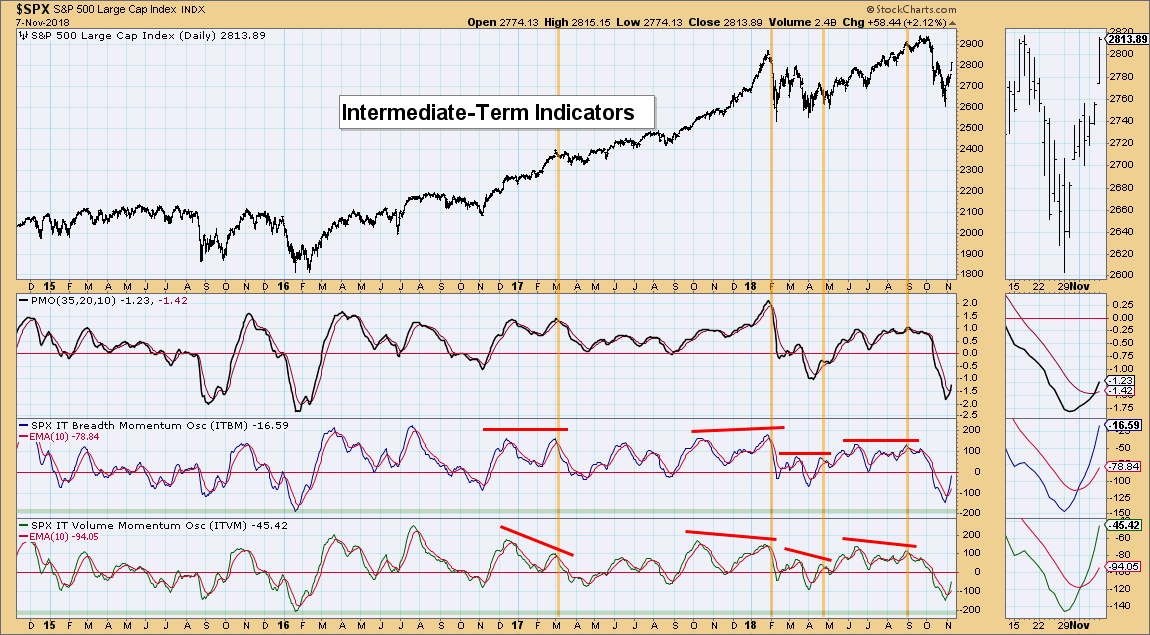 Conclusion: Let's just say I'm cautiously optimistic about today's rally. The right sectors led today, Technology and Discretionary (although along with the defensive sector Healthcare) but volume wasn't up to snuff. I wanted to see a sizable move on volume to finish above its 50-day moving average and it didn't even surpass it. I believe the possibility of a bear market is diminishing with this rally, but I'm not ready to take it off the table yet.

UUP Daily Chart: The Dollar has been sliding for the past week off its October high. It is now sitting on support at the early October top. I don't think it will hold that, I'm looking for a move to the $25.20 level given the nearing PMO SELL signal and drop in the OBV. 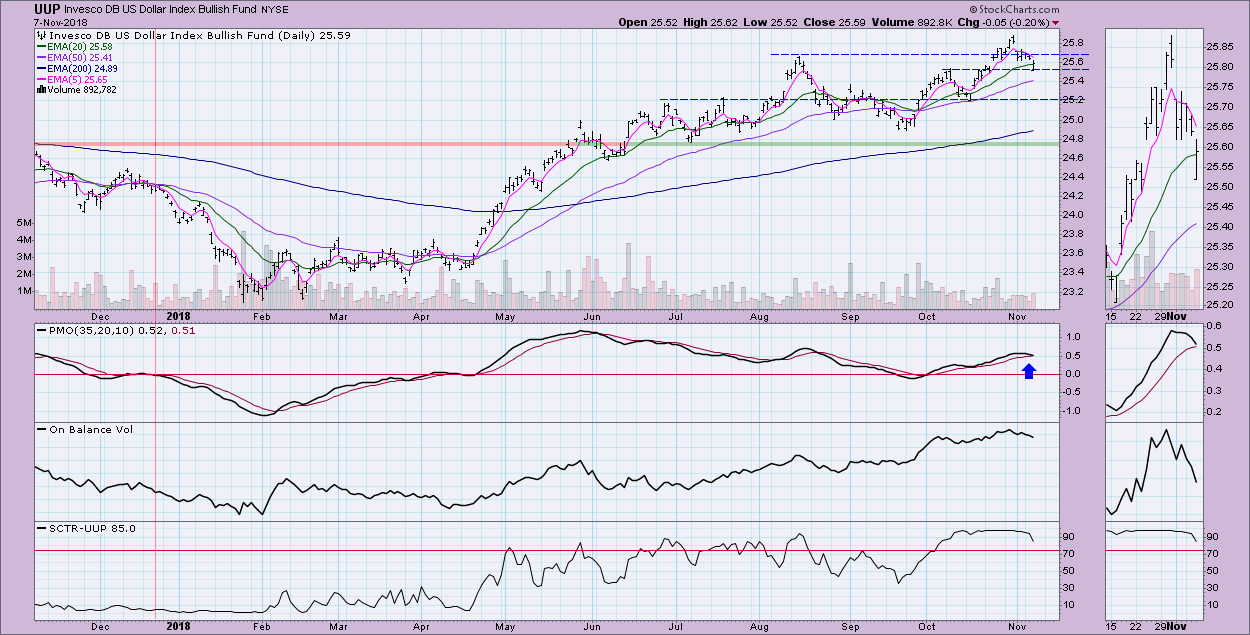 GOLD Daily Chart: With the Dollar not prospering, you would expect to see Gold taking advantage. The correlation between Gold and the Dollar has moved into a positive rather than negative correlation. This suggests that Gold is decoupling from the Dollar. I originally thought that would be a positive for Gold as the Dollar looked like it would be rallying longer. Instead it is falling and rather than the reverse correlation working in Gold's favor, it is working against it as both the Dollar and Gold flounder. Bearish sentiment is high, but the loss of price momentum and drop in the SCTR suggest Gold will not be able to break above the $1240 mark. 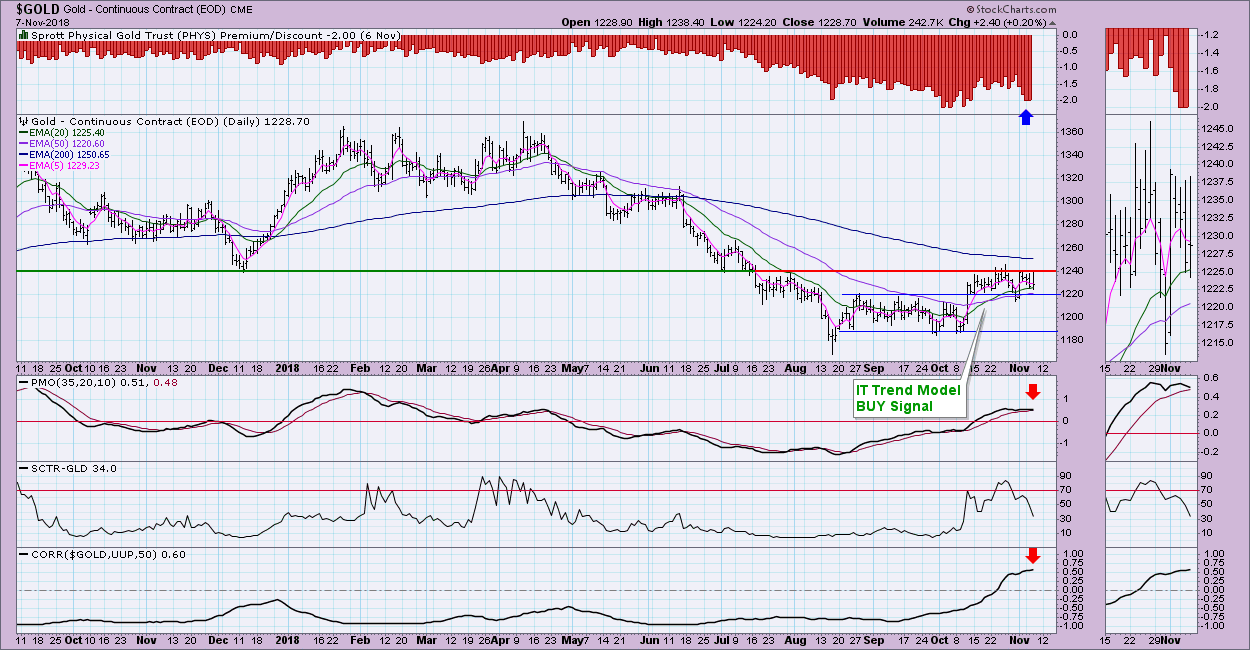 USO Daily Chart: Oil has been declining since the beginning of October. It lost support at the $13.40 level, but does seem to be holding the $13 level that aligns with June lows. The PMO is oversold, but it isn't decelerating yet. I suspect we could see some consolidation sideways along the $13 support level. If the PMO begins to turn back up, that should be a solid bottom. If we lose the $13 support level, we could see price move to $12. 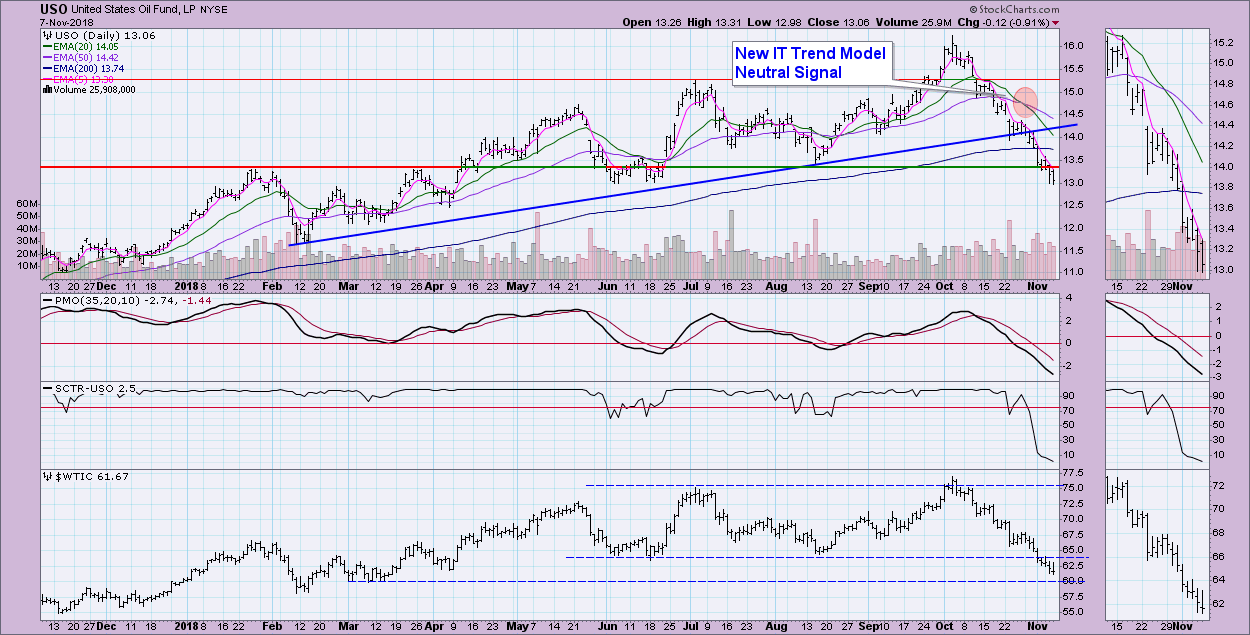 TLT Daily Chart: Bonds appear to have found support at $112. The PMO is still on a SELL signal but it is flirting with a whipsaw BUY. Even if Bonds rally here, resistance at $115 will likely hold strong. 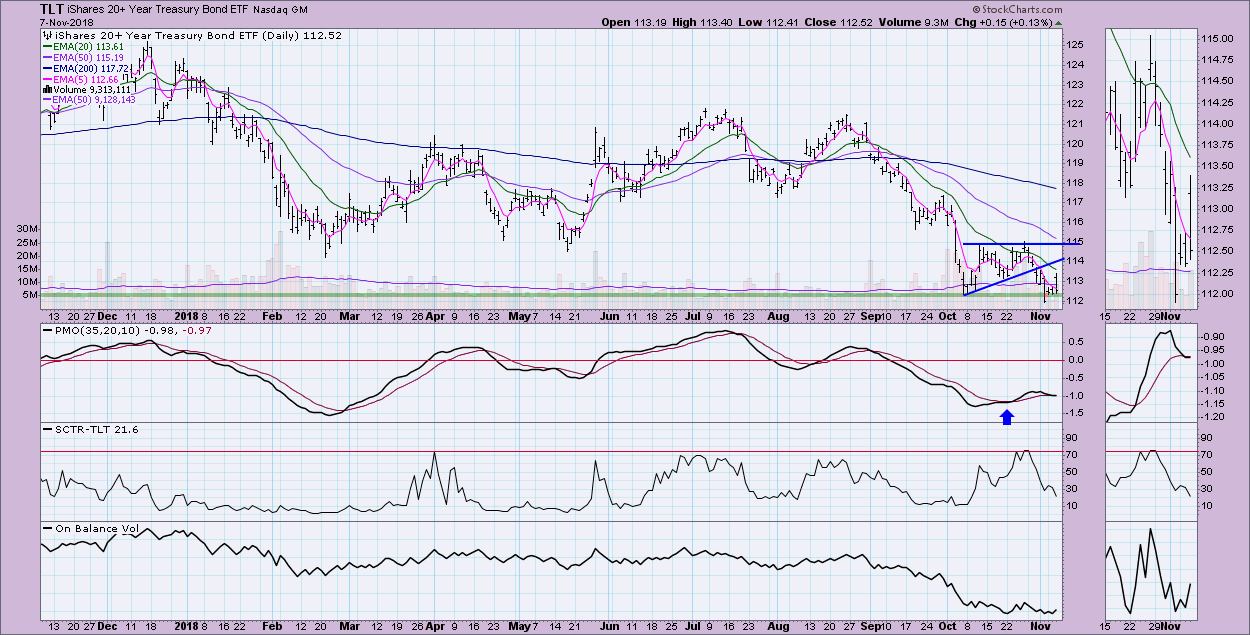