Last week certain indicators had me looking for a short-term market top, and on Wednesday it looked as if it had arrived. But no. On Thursday the market moved to new rally highs on volume that wasn't too little or too much, so I thought that looked like a pretty solid breakout. But no -- it was a fakeout. Friday saw a level of selling that we haven't seen for some time, and price retested support that goes back to the three important price tops that were formed late last year. So we finally got the short-term top I was looking for, and in our market discussion below we will look for clues as to what might happen next. 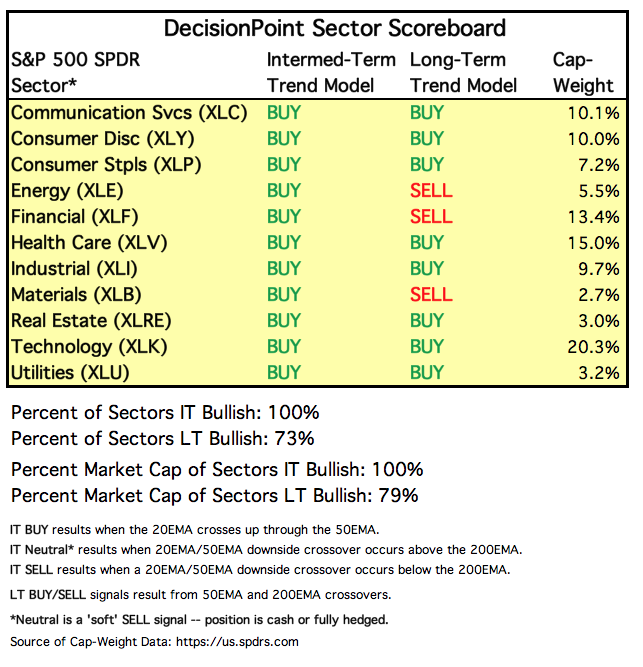 SPY Daily Chart: A new addition to this chart is the bearish rising wedge formation, which was nailed down by Friday's decline. There are also OBV and PMO negative divergences. Finally, we can see that the VIX penetrated the lower Bollinger Band. That could mean another short-term rally is in store, like two weeks ago, or it can signal the beginning of a decline, like in October and December. So far, no important trend line or horizontal support lines have been broken. 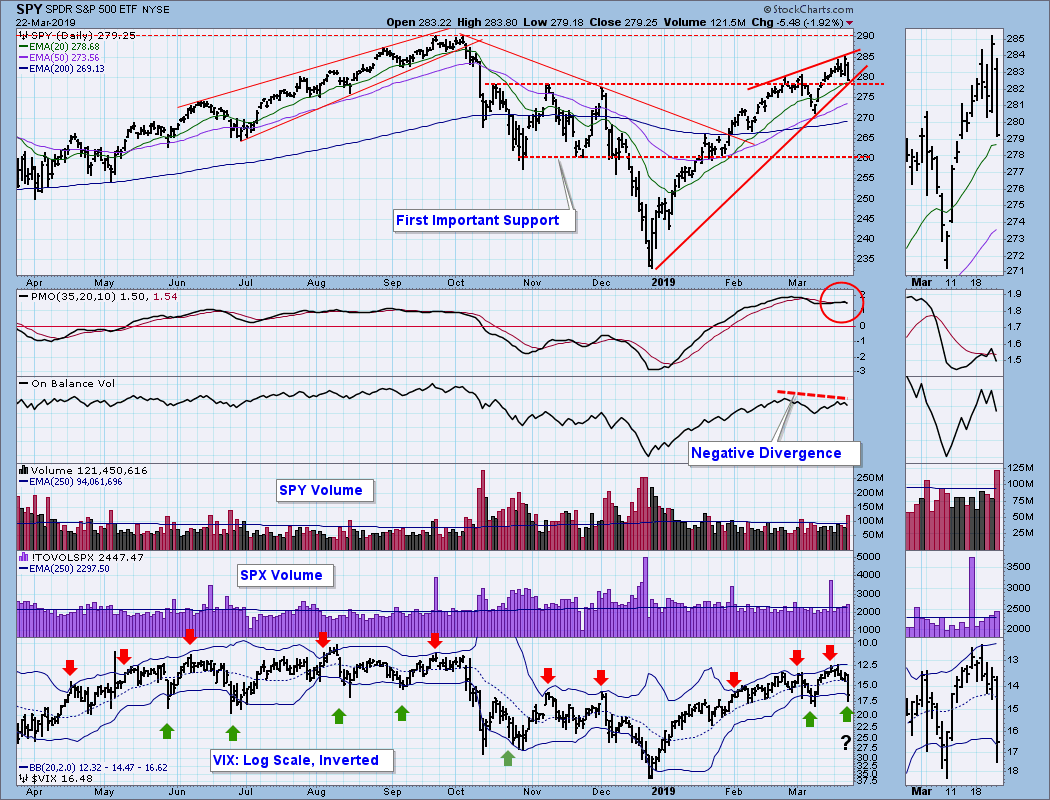 SPY Weekly Chart: Of the last three weeks, two have been down weeks, but the rally has been extremely strong, and the weekly PMO shows no weakness. 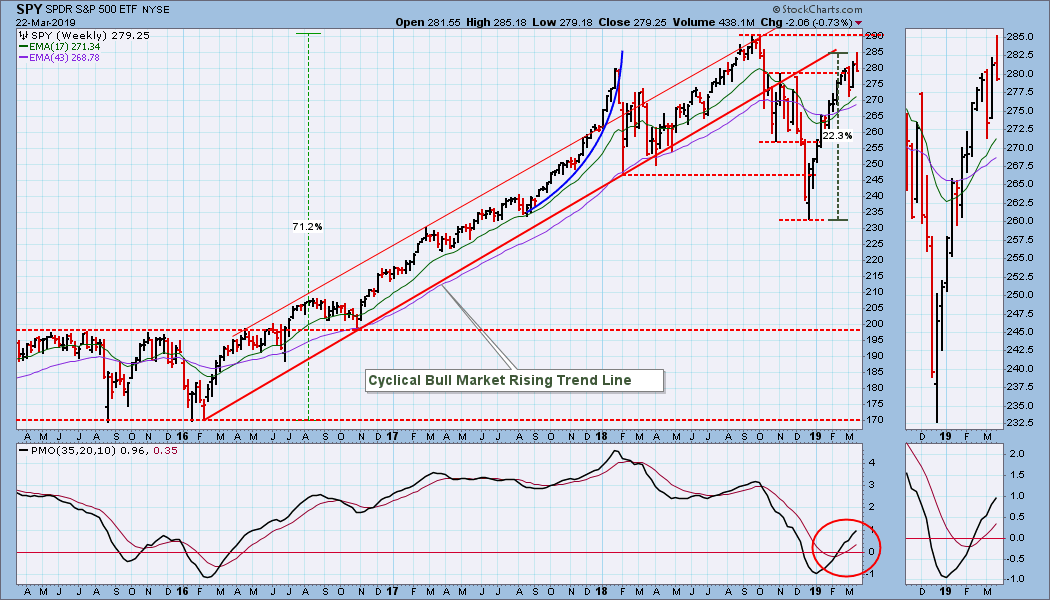 Climactic Market Indicators: As well as the issues mentioned on the daily chart above, there has been some recent climactic breadth movement, but it was not seconded by volume until Friday. There are also PMO and New High negative divergences. 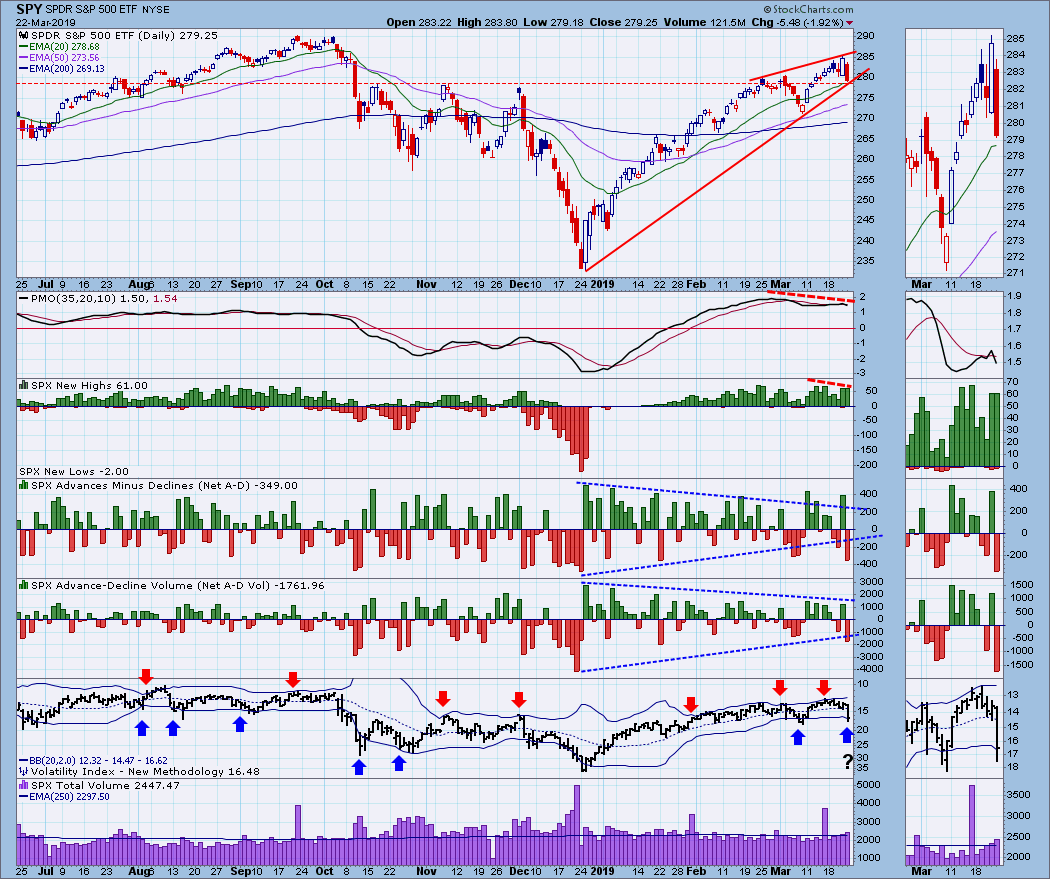 Short-Term Market Indicators: The STO-B and STO-V have declined into the neutral zone. Note that price broke out last week, and this week it pulled back to the point of breakout. 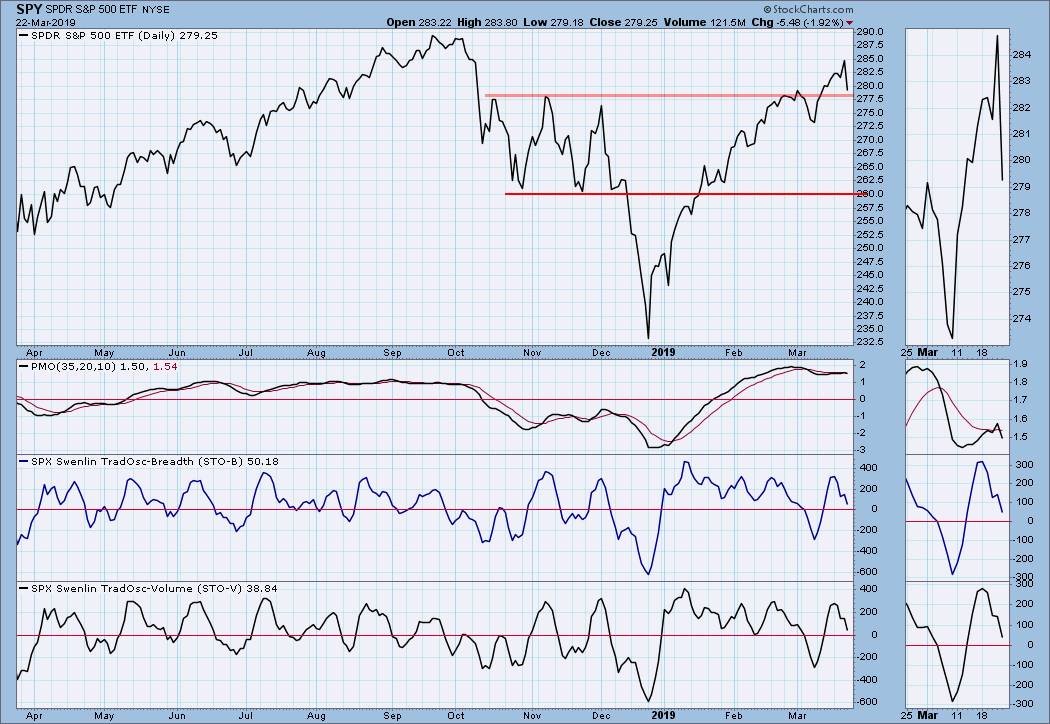 Intermediate-Term Market Indicators: Unanimous and quite strong negative divergences are displayed on this quartet of indicators. 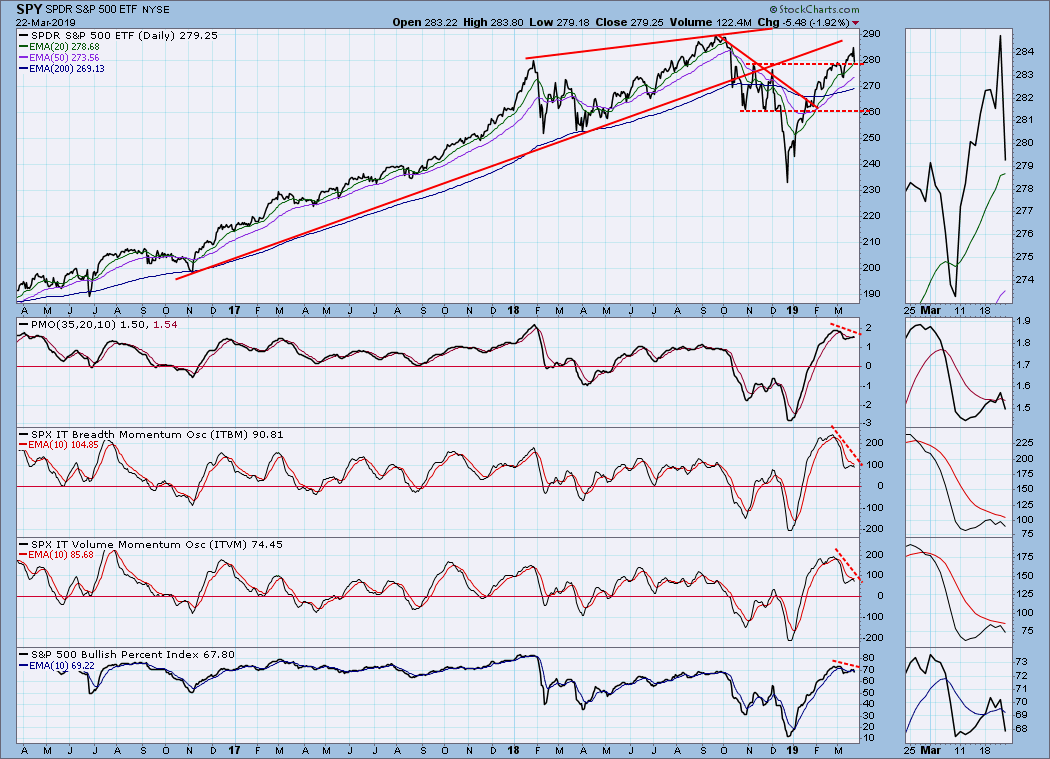 CONCLUSION: After the market closes on a day like today, it is easy to feel unsettled or somewhat confused, but a deliberate, disciplined review of the charts usually clears the fog. As I was reviewing the charts today, I began to feel the gradual formation of a conclusion, and when I saw the chart immediately above, the conclusion coalesced, as most often happens. Bottom line: The negative divergences are too ubiquitous to ignore, and I think we will see more selling next week and probably longer. To think that the December low will be tested is a bit of a stretch at this point, but a bigger decline than the one at the beginning of the month might not be too much to hope for.

Of course, just because I feel good about a conclusion doesn't mean it will be a correct one, but there is a satisfaction in knowing that the picture was not forced, but allowed to emerge on its own.

UUP Daily Chart: Price is in a very loose rising wedge pattern. The light dashed red lines show how UUP has had a tendency to resolve patterns bullishly, although the breakout earlier this month failed. 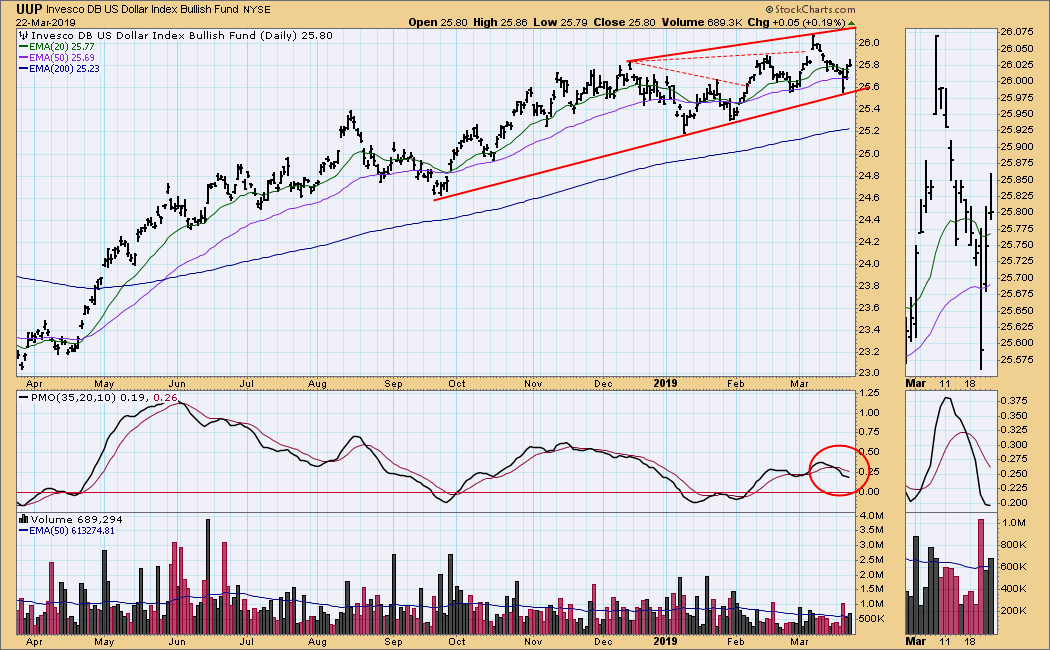 UUP Weekly Chart: UUP is in a rising wedge pattern, and is approaching major overhead resistance. The weekly PMO is positive but stalled. 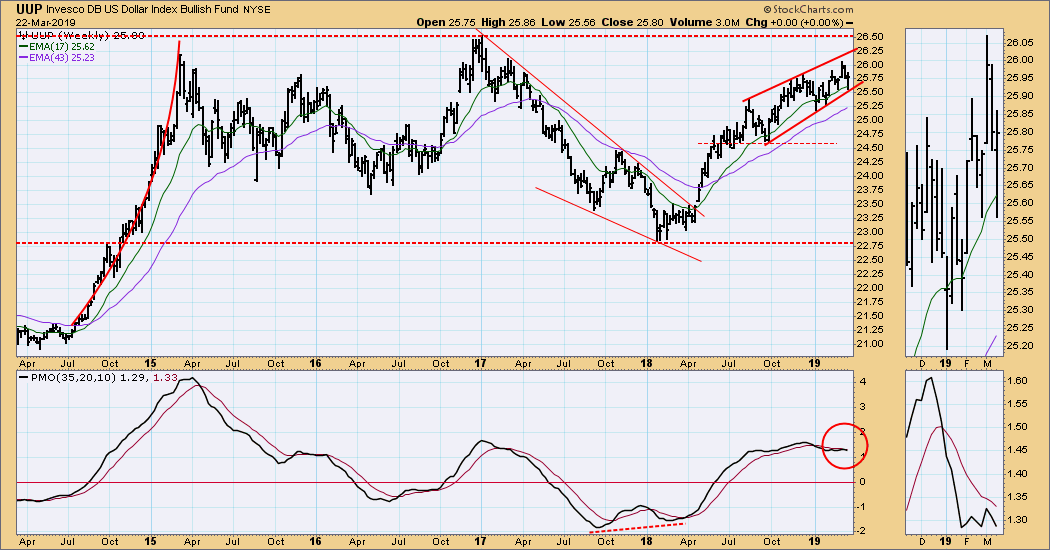 GOLD Daily Chart: Gold has rallied back to the point of breakdown earlier this month. The daily PMO is running flat on the zero line -- dead neutral. 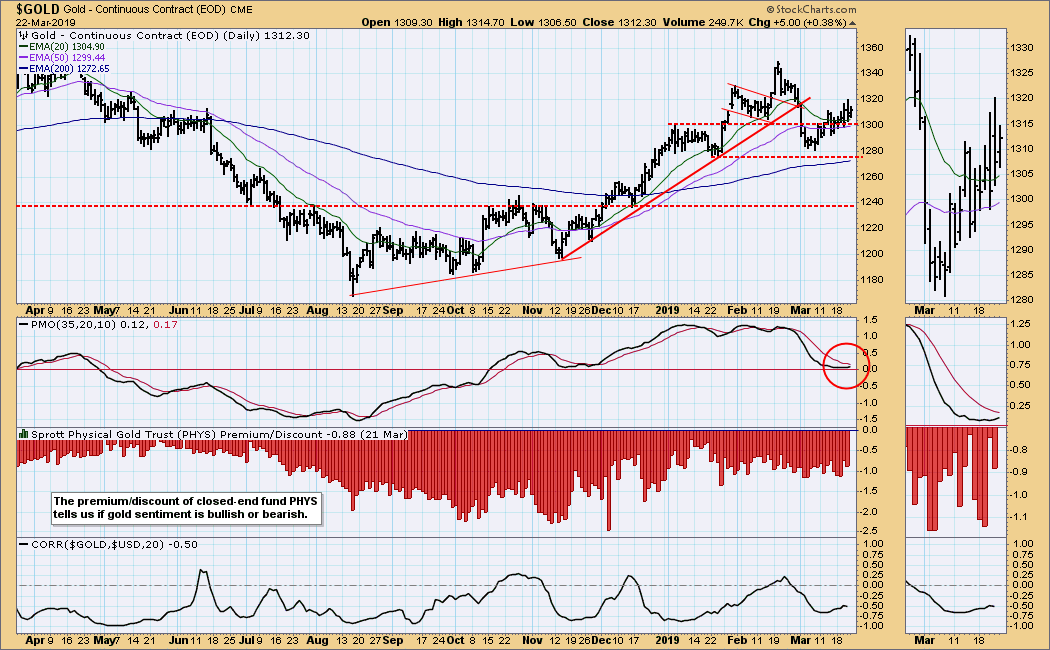 GOLD Weekly Chart: Gold is somewhat more positive in this time frame. It is tentatively in a rising trend channel with major resistance at 1375. The weekly PMO is well above the zero line, but it has flattened, indicating that gold has positive movement but is not accelerating. 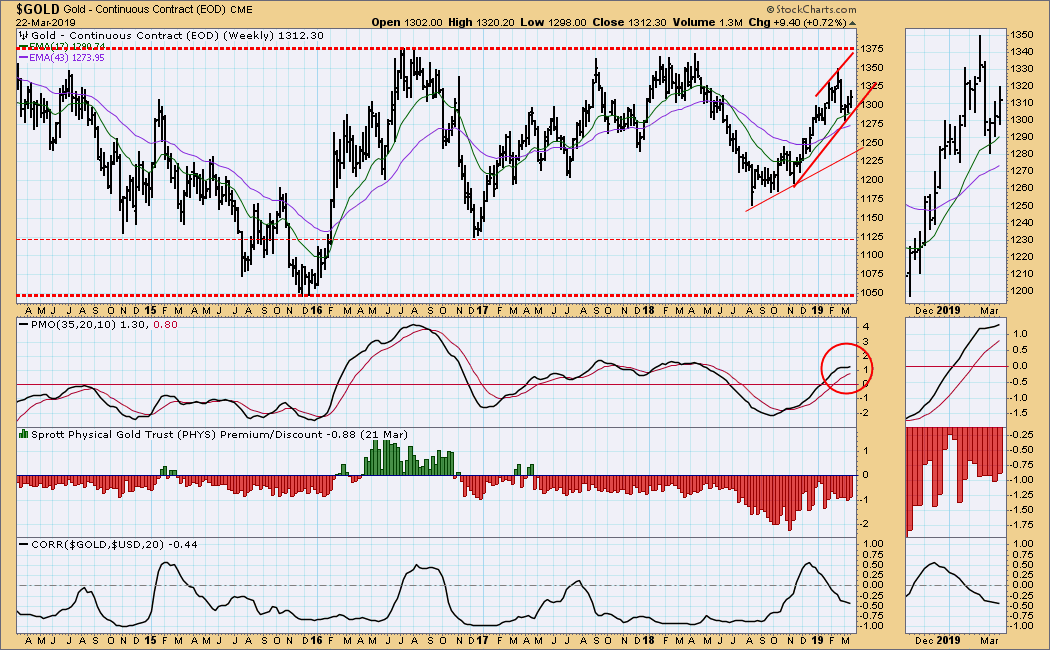 USO Daily Chart: Price has hit the top of a rising trend channel and appears to be headed for another test of the bottom of the channel. The daily PMO is overbought and has topped. 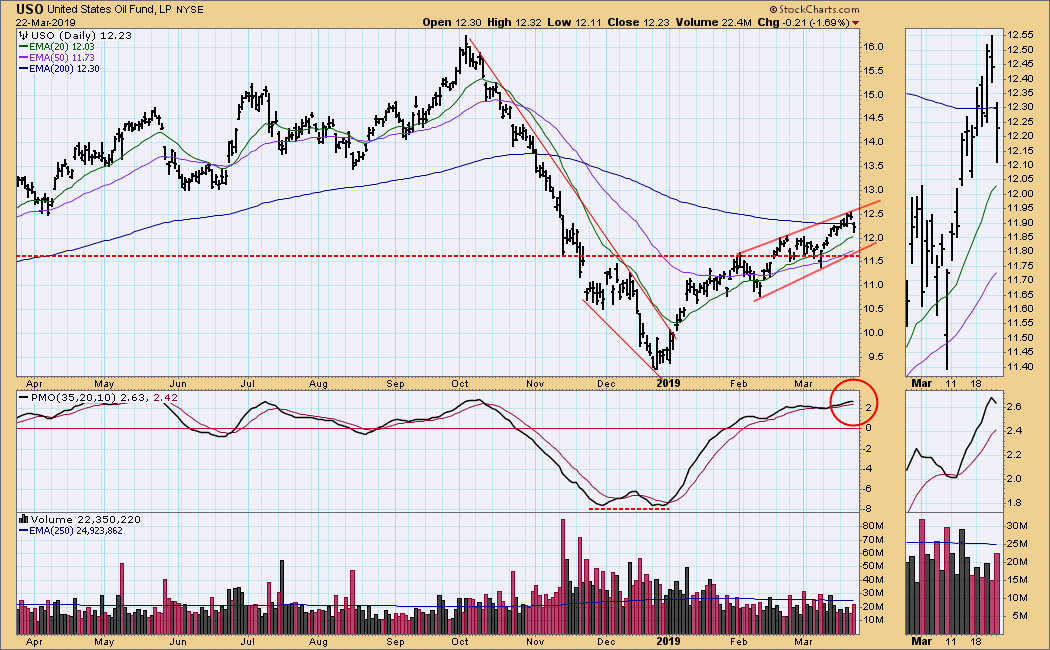 USO Weekly Chart: In this space I normally show the weekly chart of USO and $WTIC, but this week I decided to focus on USO because of the very pronounced rising wedge pattern in this time frame. The apex is very tight, so it should resolve soon, and probably to the downside. 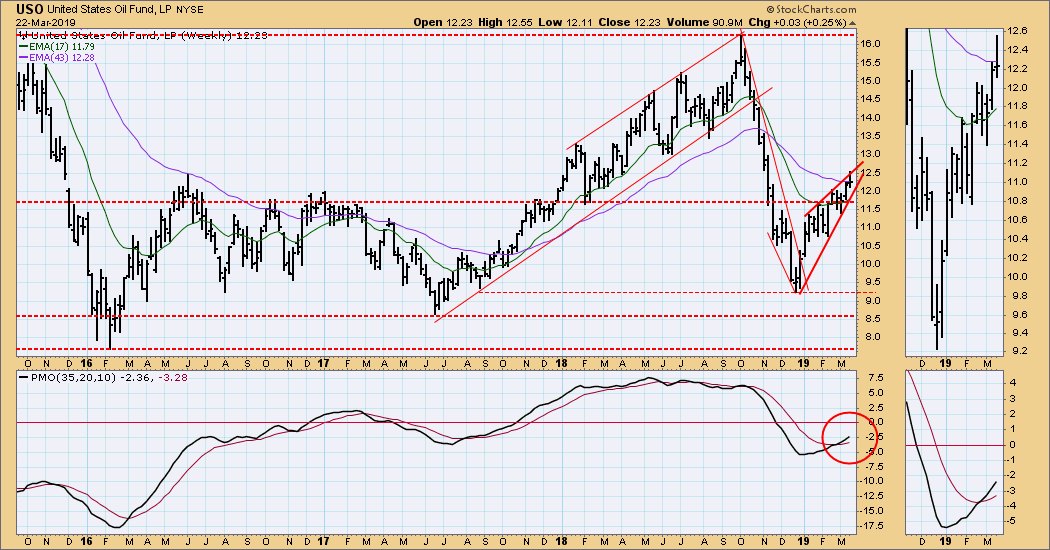 TLT Daily Chart: I had one reaction when I looked at this chart Friday morning. Yikes! This week TLT broke out of a classic bullish flag formation and from Tuesday's low TLT advanced about 3.5%. 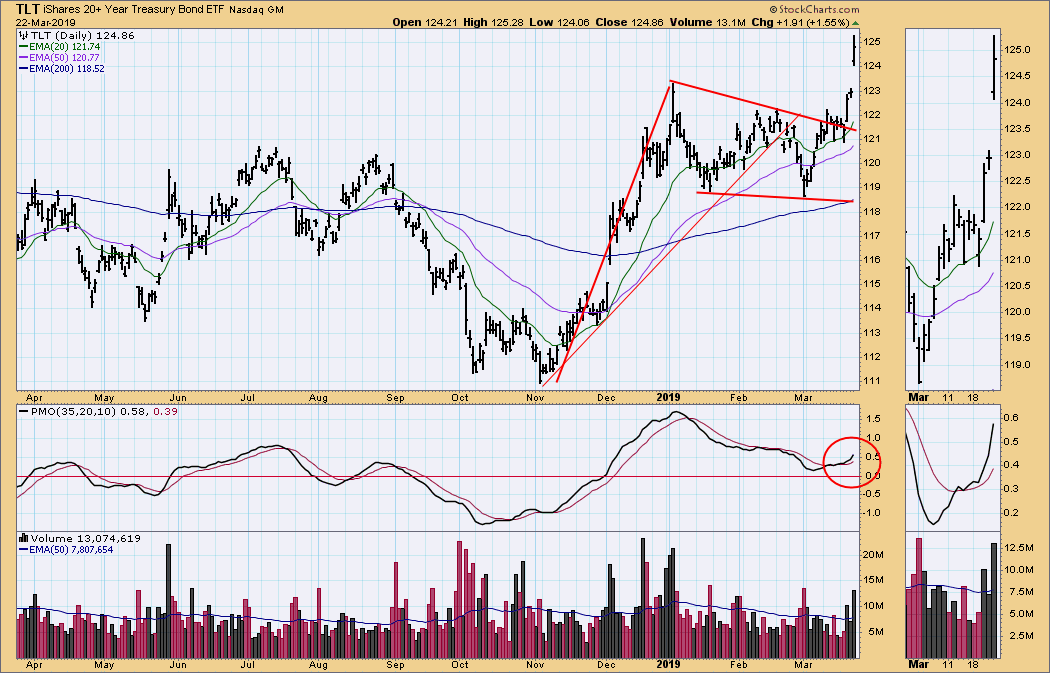 TLT Weekly Chart: Price is not clean away from the recently penetrated overhead resistance (now support), but there is plenty of room before the next resistance level comes into play. I remember several months ago when I thought to myself that I should just stay on bearish autopilot for bonds, but that was before the Fed pulled in its claws. 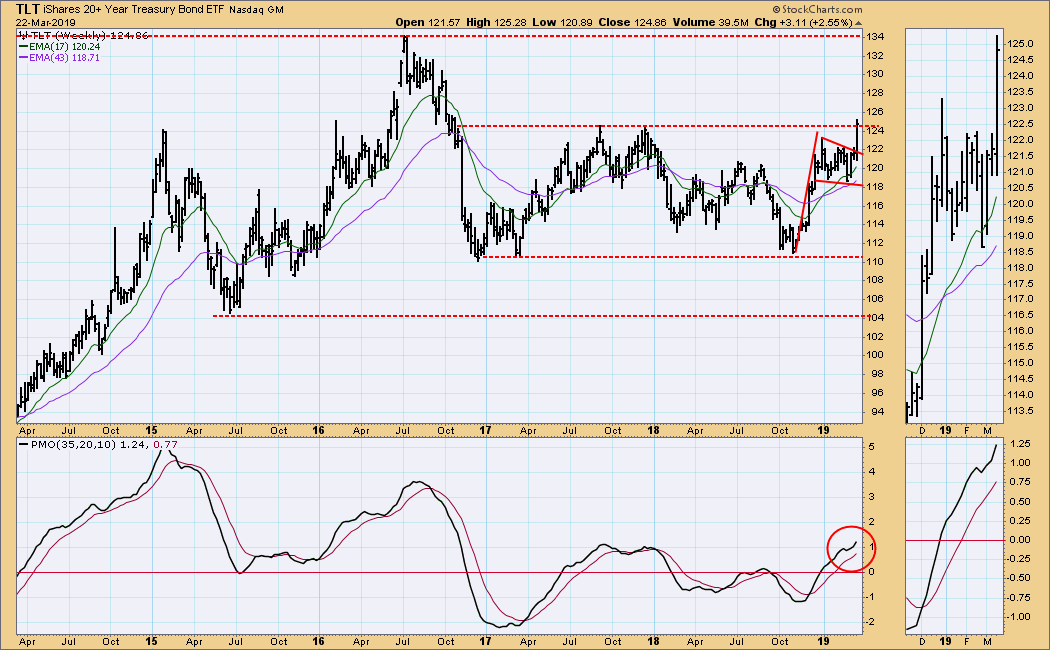