Our good friend Martin Pring has contributed today's episode of "Don't Ignore This Chart!"  In case you aren't familiar with his work, Martin has authored over 15 books on the subject of Technical Analysis including the classic "Technical Analysis Explained."  When he is not making presentations throughout the world, he is updating his website, Pring.com.  Thanks, Martin!  - Chip

End of the Movie for NetFlix?

Netflix has been getting the headlines recently thanks to a 12-month run up from less than $60 to a recent intraday high close to $400. However, Tuesday's trading action may have put a cap on the fortunes of this high flying stock as it experienced what technicians call  an "outside day".  A bearish outside day is a trading session, following a rally, in which the trading range totally encompasses that of its predecessor. Provided the close develops more than half way down the bar, it indicates exhaustion by the buyers. Normally such patterns have a bearish effect on prices for 5-10-days, but not all outside days are created equal. The Ford Edsel has the characteristics of a car just like a top of the line Mercedes. Likewise outside bars are also delivered in various levels of quality.  Tuesday's is of the highest caliber because it reflects a complete turnaround in the battle between buyers and sellers.

In the previous six months prices saw an orderly progression as buyers slowly but persistently maintained the upper hand. However, the outside day experienced a sharply higher gap opening indicating extreme optimism by the buyers; by the close it was sellers who were in charge as the price settled well below the lows of the previous two days. 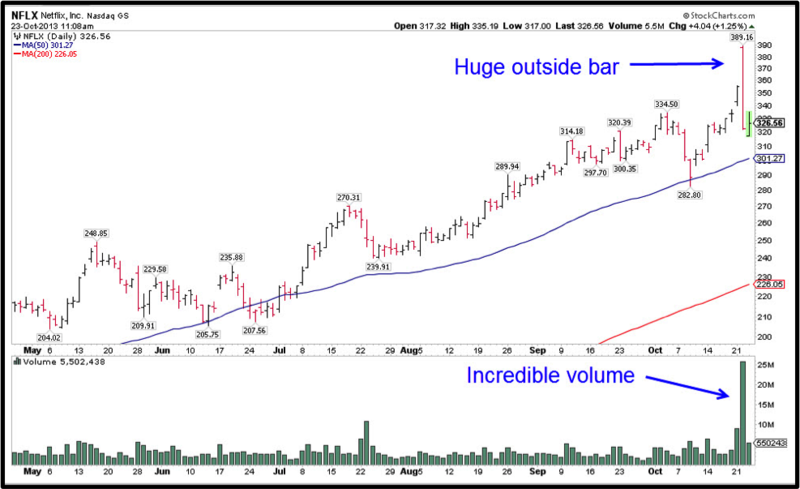 Generally speaking the wider the bar the greater the battle between buyers and sellers. Tuesday's action was particularly impressive not only because it was extremely wide but was also accompanied by huge volume reflecting total buyer exhaustion. Often (but certainly not guaranteed) such activity is followed by some form of retracement move. If this proves to be the case in the current situation it would offer those with a 2-3-month time horizon a better opportunity to liquidate. Either way it would be normal, but again not guaranteed, for prices to experience some ranging action prior to moving lower.

What we cannot say is that this outside bar represents the top for Netflix. That's because none of the longer-term indicators such as moving averages, primary trend smoothed momentum etc. have yet turned bearish; nor would we expect them to so close to a high. What can be concluded is that substantial technical damage has been done to the stock and that extensive corrective action is likely to materialize in the period ahead. In effect, Tuesday's high is very likely to remain intact for many weeks into the future. Is it the end of the movie? We will have to wait on that one.