It was bound to happen. Gold has been struggling with a correction that began when price failed to reach the August 2014 high. The intermediate-term DP Trend Model generated a SELL signal today when the 20-EMA crossed below the 50-EMA. Since the 50-EMA was below the 200-EMA, it created a SELL signal. If the 50-EMA is above the 200-EMA, we consider it to be in a "bull market" and consequently we want our model to reflect that by going on a Neutral signal rather than a SELL. The only reason the signal took so long to arrive was that the previous rally had helped the 20-EMA put some real distance between it and the 50-EMA. We had warning that gold was beginning to tarnish when the PMO had a negative crossover its 10-EMA at the beginning of February. Now the PMO has taken itself out of the rising trend it had enjoyed since late last year. This is very bearish. Additionally, the PMO is only sitting in neutral territory so it has plenty of downside left before it becomes oversold. 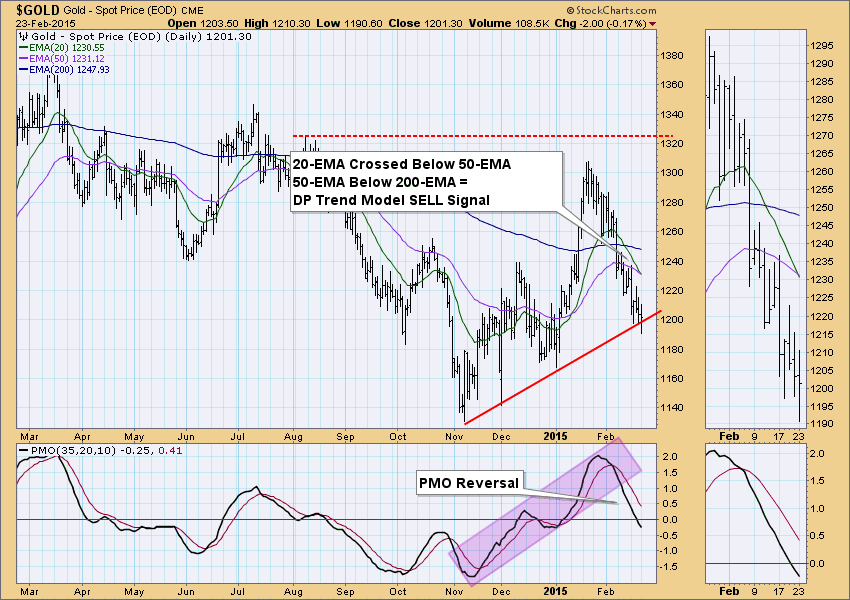 Don't forget to sign up to attend my next DecisionPoint LIVE! webinar on Wednesday, February 25th. Here is a link to the sign up page. Be sure to tweet your chart requests @_DecisionPoint for guaranteed review or bring them to the webinar and it might be chosen for review at the end of the program.