The Airline Index ($XAL) has been a real dog in 2015, but the index is showing signs of support and a double bottom could be emerging. The chart below shows $XAL peaking in January and moving lower the last six months. The 10-day EMA is below the 100-day EMA and the trend is clearly down. Signs of support are emerging because the index bounced off the June low in early July. 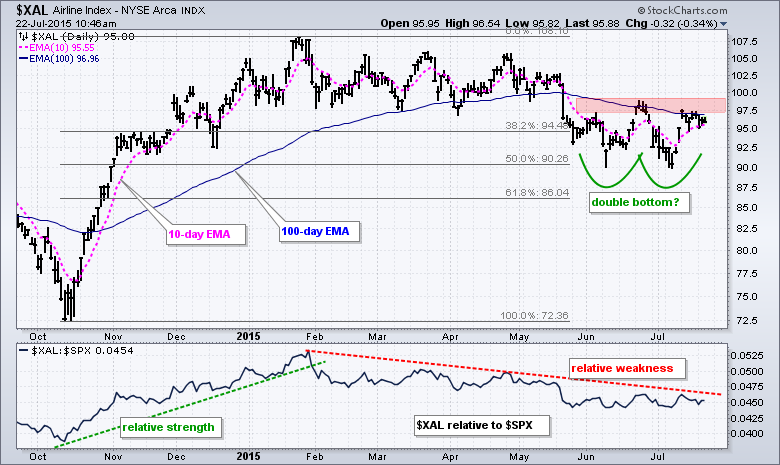 Note that Tom Bowley featured the DJ US Airline Index ($DJUSAR) in his Trading Places blog as the index tested support in early July. It was a timely post that may prove even more timely for this group. Turning back to $XAL, the two lows suggest that a double bottom may be forming with the late June high marking resistance. A breakout here would confirm the double bottom and reverse the 2015 downtrend.

The indicator window shows $XAL relative to the S&P 500 using the price relative ($XAL:$SPX ratio). $XAL still shows relative weakness, but the price relative flattened in June-July. A break above the June high would signal a return to relative strength in $XAL.

Short-term, the chart above shows $XAL with a surge and a pennant. Pennants are short-term continuation patterns that represent a rest after a sharp move. A move above 97.5 would trigger a pennant breakout and this would increase the odds of a double bottom breakout. Chartists interested in individual airlines can check out these charts: AAL, ALK, HA, JLBU, SAVE, SKYW, UAL