Alcoa is showing early signs of relative strength and momentum is improving as the Commodity Channel Index (CCI) breaks into positive territory for the first time since February. 2015 was clearly a rough year as the stock fell over 35% from January to August. The overall trend is down, but the stock is showing signs of a base with two lows at 8 and two bullish candlestick patterns. The two lows near eight form a potential double bottom that would be confirmed with a break above the intermittent high. The first low formed with a bullish engulfing and the second with a piercing pattern.  A gap up followed this piercing pattern and that gap is holding for the most part. The stock is getting a big lift this week with a break above the November high. Based on the mid November gap and last week's low, I would mark first support at 8.6. 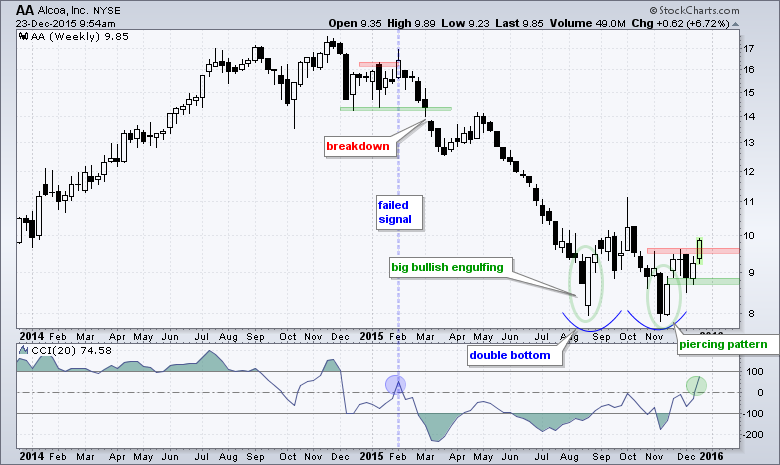 As of Tuesday's close, the S&P 500 was down around 2% month-to-date and Alcoa (AA) was up around 2%. With today's advance, AA broke above the November high and continues to show early signs of relative strength. The indicator window shows momentum improving with the Commodity Channel Index (CCI) breaking above zero and hitting its highest level of the year. Donald Lambert, creator of CCI, theorized that a surge above +100 could be used to signal the start of an uptrend. Similarly, a surge below -100 would signal the start of a downtrend. Looks like CCI is close to signaling the start of an uptrend for AA and this stock could go from 2015 dog to 2016 darling.