The consumer discretionary sector is one of the weakest performing sectors over the last six months, but the overall chart looks constructive and I am watching the October highs for a breakout. Note that I am analyzing the Equal-weight Consumer Discretionary ETF (RCD) because it tells us how the "average" stock in the sector is performing. In contrast, the Consumer Discretionary SPDR (XLY) is weighted towards large-caps because the top ten stocks account for 52% of the SPDR.

The EW Consumer Discretionary ETF declined the last two months with a move to the mid 80s, but I think this is a correction within a bigger uptrend for two reasons. First, the overall trend is up because the ETF formed a higher low in June and recorded a 52-week high in August. Second, RCD surged over 10% from late June to mid August and the ETF was entitled to a correction. A correction is perfectly normal at this stage. 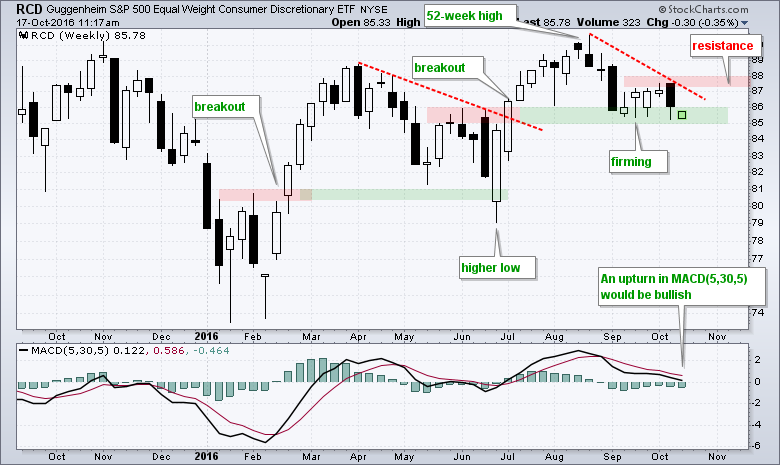 There are signs that selling pressure is abating because the ETF is making an attempt to firm in the 85-86 area. Notice how this area previously marked resistance and it is now turning into a support zone. Also notice how the ETF held this zone throughout September. Even though selling pressure is abating, buying pressure has yet to return. Chartists should watch the October high and resistance in the 87-88 area. A breakout here would reverse the immediate downtrend and signal a resurgence in buying pressure.