Banking stocks are leading the market on Wednesday and JP Morgan is leading the sector as one of the first of the big banks to hit a new high. I featured the Regional Bank SPDR (KRE) and the Bank SPDR (KBE) in ChartWatchers this weekend and JPM has the same chart pattern working. After a Brexit-induced swoon in June, the stock recovered sharply and broke above its May high with a gap-surge in early August. The stock corrected most of September with a falling flag and broke flag resistance with a surge above 67 today. 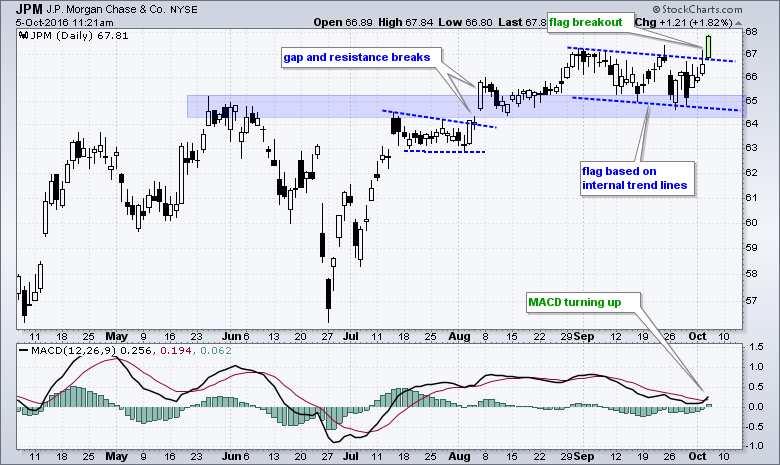 Note that I am drawing internal trend lines to mark the flag. An internal trend line cuts through a spike high or an intraday low. Trend lines are not "hard" resistance levels anyway and I used them mostly to define patterns. The falling flag is a bullish continuation pattern and the breakout signals a continuation of the July-August advance. It is positive to see the finance sector leading the market because it is the third biggest sector in the S&P 500 (13.2%). In addition to the flag breakout, MACD turned up and moved above its signal line.