TJX Companies (TJX), which operates TJ Maxx and Marshalls, recently broke out of a corrective pattern and this argues for a continuation of the bigger uptrend. It has been a rough year for most retail stocks with the Retail SPDR (XRT) down around 1% year-to-date. In contrast, TJX is up around 4.5% year-to-date and showing relative strength within its group. On the price chart, I think the long-term trend is up because the stock ultimately held support in the 72-74 area and the 10-week EMA is above the 40-week EMA (PPO(10,40,5) is positive). 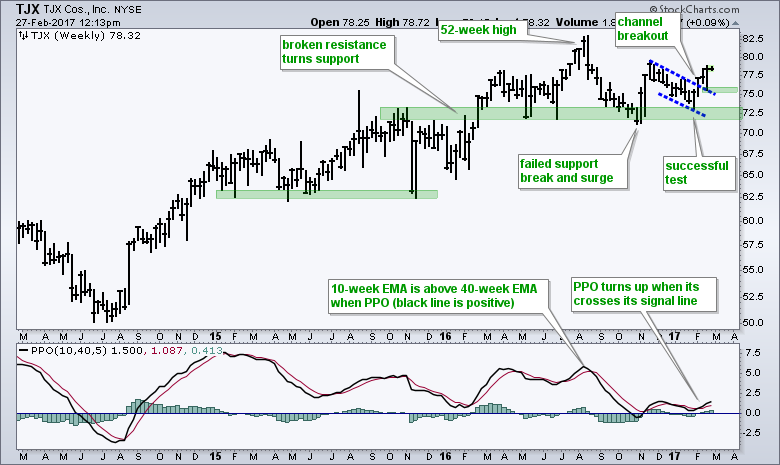 With the long-term trend up, I am interested in bullish setups and signals because they are in harmony with the bigger trend, which is the dominant force at work. TJX seemed to break support in October, but ultimately held with a surge above 77 in November. The stock tested this area again with a dip back below 75 in January and broke out of a falling channel with a surge in early February. Also notice that the PPO(10,40,5) turned up and moved above its signal line. Thus, it looks like TJX is turning back up within a bigger uptrend and this is bullish. Chartists with a bearish bent will no doubt see a potential head-and-shoulders reversal pattern. I would not take this pattern seriously unless TJX closes back below 75 and the channel breakout fails.