Walgreens Boots Alliance (WBA) has traded quite choppy over the last 12 months, but I think the bigger trend is up and the recent wedge breakout is bullish. First, notice that WBA broke above a major resistance zone with the November-December surge. This move forged a 52-week high and set the bullish tone for the long-term uptrend. Second, note that the 200-day slope turned positive in late August. This indicator measures the slope of a 200-day linear regression, which is the line of best fit for 200 data points (closing prices). See our ChartSchool article for more details. 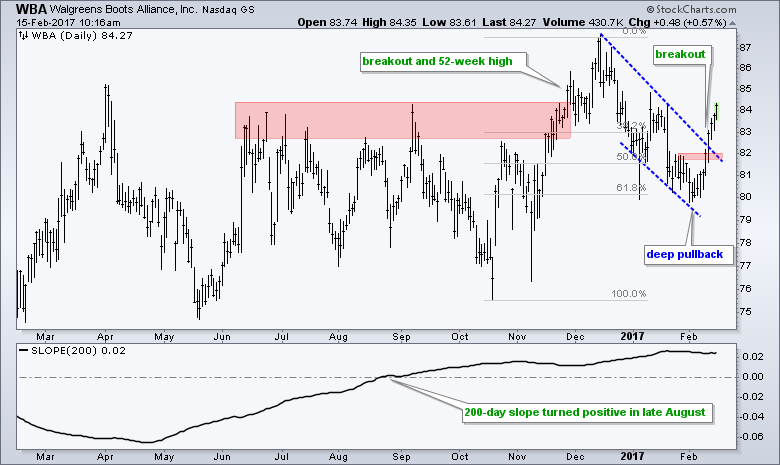 After the breakout and 52-week high, WBA fell back below 80 with a rather sharp decline. I would not call this a "failed" breakout because the move produced a 52-week high. Instead, the decline looks like a correction after a sharp advance. Notice that this decline retraced a little over 61.8% of the prior advance and formed a falling wedge. Both the retracement amount and pattern are typical for corrections after an advance. It now looks like this correction has ended with the upside breakout and eight day advance. Even though the stock is getting a little extended for the short-term, it is one I want on my radar in the coming weeks and months.