The cup-with-handle is a bullish continuation pattern that forms as part of a bigger uptrend. There are three parts to this pattern. First, a cup forms as prices correct and rebound to form a "V" or "U" shape. Second, prices hit resistance at the prior high and rim resistance begins to form. Third, prices consolidate just below rim resistance and a handle takes shape. A break above rim resistance confirms the pattern and signals a continuation of the bigger uptrend. Classic measuring techniques suggest that the subsequent advance should equal the height of the pattern. This implies a 20% advance from the breakout area. 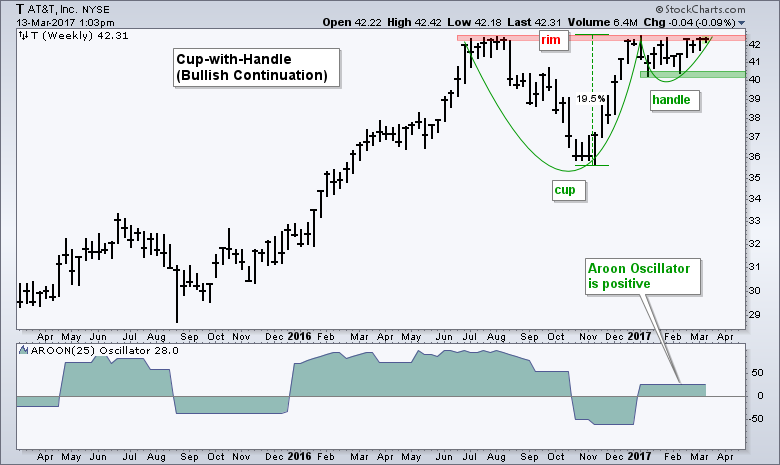 The right half of the pattern looks like a sharp surge and then a flag consolidation. This flag is also a bullish continuation pattern. More importantly, the flag lows mark support and a break below these lows would negate the cup-with-handle pattern. Chartists can also consider watching the Aroon Oscillator, which is the difference between Aroon Up and Aroon Down. The price chart has an upward bias as long as the Aroon Oscillator remains positive. A move into negative territory would argue for a reassessment.