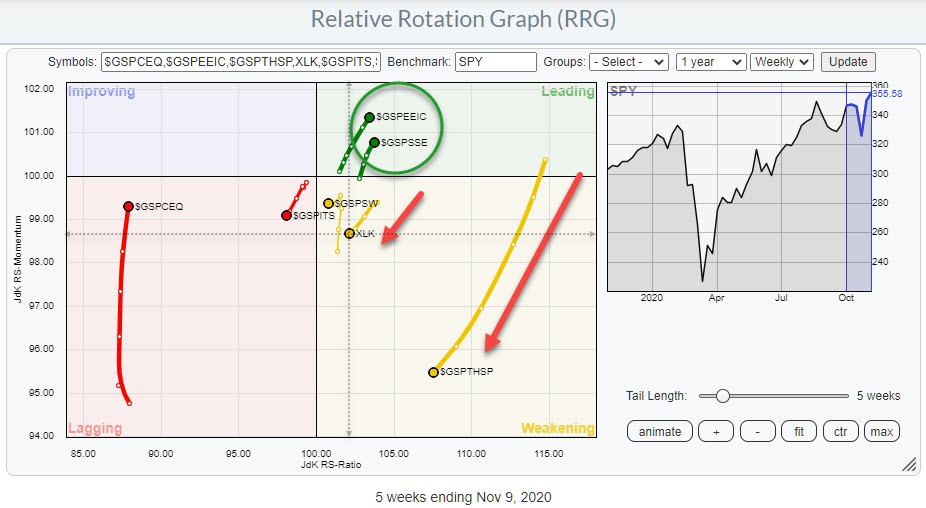 The flow of money out of the Technology sector is clearly visible on the Relative Rotation Graph for US sectors, and it is an observation that has made by many market commentators recently. What I want to do in this article is look under the hood of the technology sector and see if we can identify industries inside it that are still worth looking at for long positions - and also find areas that are better off avoided.

The RRG above shows the (S&P) Industries that together make up the S&P 500 Technology index (XLK). The benchmark for the chart is set to SPY, but I have also added XLK to the universe so we can study the rotations of the various industries against both SPY and XLK at the same time. The dashed grey axes that run through XLK help you to picture the rotation of the various industry groups against XLK.

If we start at sector level, we find XLK inside weakening and heading towards lagging, indicating the aforementioned rotation of money out of technology as a whole.

The next step is to dive into the rotations of the industries. In particular, the long tail and the RRG-Heading on the Technology Hardware, Storage & Peripherals group stands out. This is the group that holds AAPL. 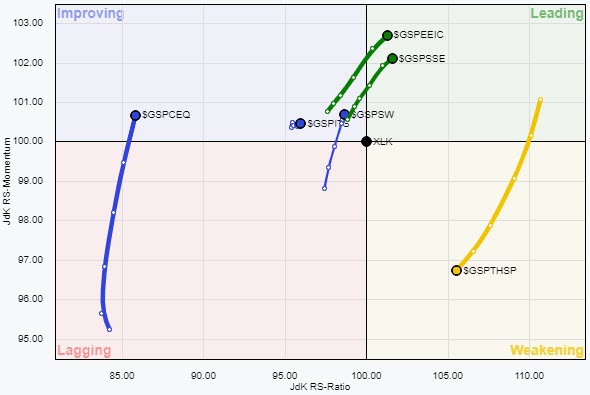 Looking beyond the dominance of AAPL and the industry it belongs to, we can actually see Electronic Equipment, Instruments & Components, and Semiconductors & Semiconductors Equipment Index moving into the leading quadrant against both SPY and XLK. Software is also traveling at a positive RRG-Heading and moving towards leading. IT Services is inside improving, but at a very short tail and low RS-Momentum, which indicates a slightly negative relative down trend that is not backed by momentum. The Communications Equipment Industry is far to the right, with a vertical move into improving that suggests a recovery move inside a relative downtrend.

Thus, the big rotation that is going on INSIDE Technology is the move OUT of Technology Hardware, Storage & Peripherals, essentially out of AAPL, and INTO Electronic Equipment, Instruments & Components and Semiconductors & Semiconductor Equipment.

Out of these two industries, I like the chart for Electronic Equipment best. 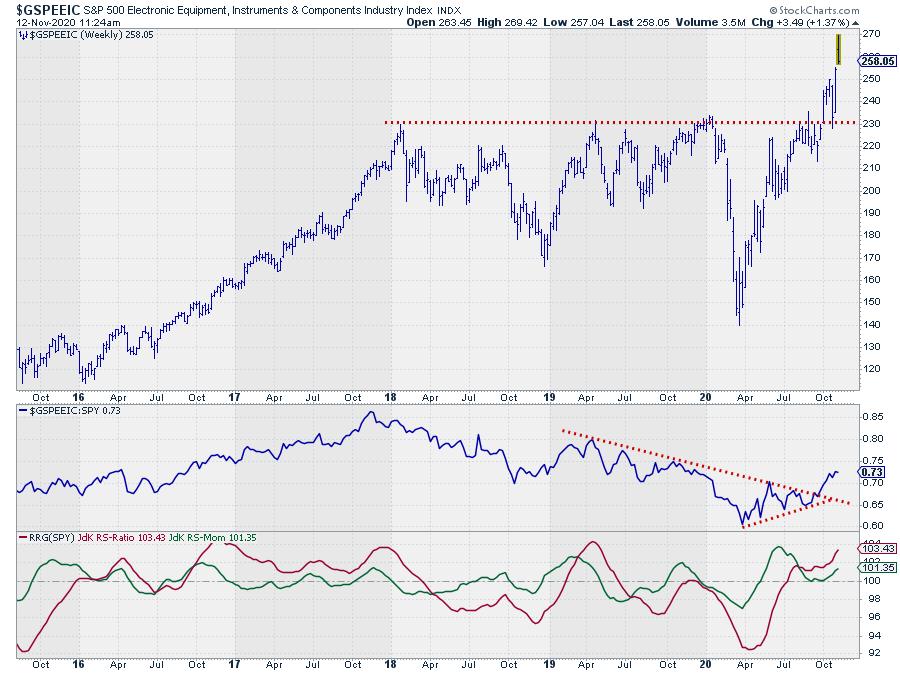 This group broke above important horizontal resistance a few weeks ago and has been able to hold up above this level, now support, very well.

More interesting is the turnaround that is visible in relative strength against SPY. After a long relative downtrend, this group bottomed in April and started to move sideways to up in a consolidation pattern (triangle?), out of which it recently broke upwardly. With both RRG-Lines now moving up further above 100, more relative upside may be expected for this group going forward.