Throughout the past week, the Indian equity market struggled to keep its head above crucial levels and ended the week with modest gains. Keeping on anticipated lines, the week remained very volatile as the markets oscillated in a 385-point range. The week that went by digested the reforms initiated by the Government to aid the slowing economy, as well as the recurring threats of intensifying trade war between the US and China. Amid this mixed setup, the headline index managed to end with net weekly gains of 193.90 points (+1.795). The month of August remained negative, with NIFTY losing 94.75 points (-0.85%) after oscillating in a 544-point range. 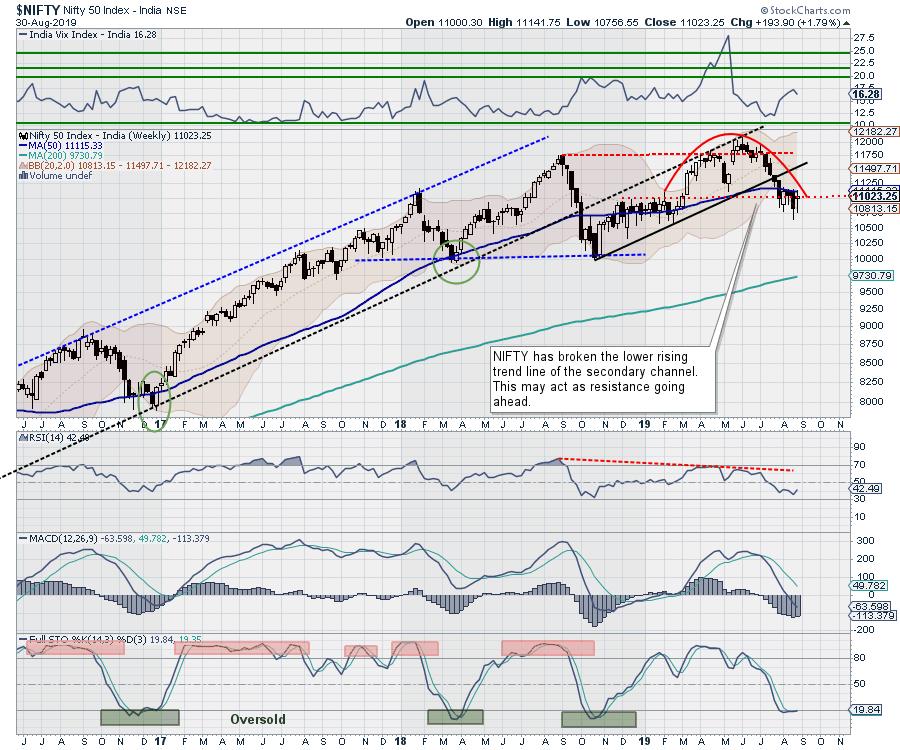 The zone of 11100 to 11210 remains extremely treacherous for the markets. While the level of 11000 remains the neckline of the rounding top formation that the NIFTY violated, the 50-Week MA lies at 11115 and the 200-Day MA stands at 11209. This shows that the Index has a stiff overhead resistance to deal with going forward; it will be imperative for the NIFTY to keep its head above the 11000-mark.

In the coming week, the markets will also see the slowdown getting digested while reacting to the GDP numbers, which were at 6-year lows. We expect a soft start to trade on Tuesday, and the markets will also adjust to the global trade setup as it will open after an extended weekend, with Monday being a trading holiday.

The coming week will see the levels of 11160 and 11255 acting as resistance, while supports are expected to come in at 10960 and 10780. Just like the previous week, the trading range may remain wider than usual over the next week as well.

The weekly RSI is at 42.4994; it remains neutral and does not show any divergence against the price. The weekly MACD remains bearish and trades below its signal line. A Spinning Top occurred on the candles. Such formation portrays a struggle to stay at any particular level and also shows the indecisiveness of the market participants.

So long as the NIFTY can keep its head above the 11000 levels comfortably, it will be able to avoid any weakness from dominating once again. However, any slip below the 11000 levels will see some serious weakness taking over the markets in the immediate short term. Currently, the markets are seen trapped in a broad trading range. Though the Index has strong support near 10800, it has very stiff overhead resistance to deal with just above the current levels. We recommend continuing to stay away from any heavy exposure on either side unless a directional bias is established.

The review of Relative Rotation Graphs (RRG) depicts a very precarious set-up in the markets. The FMCG Index and IT Index are the only two groups that are firmly placed in the leading quadrant. The Consumption Index, though it is currently placed in the improving quadrant, is seen strongly improving its relative momentum against the broader markets. These three groups are likely to distinctly out-perform the broader markets on a relative basis.

Apart from this, other key indexes like BankNIFTY, PSU Banks, Financial Services, Metals, Infrastructure, Realty and Energy are seen inching higher while being placed at different points on the weakening and lagging quadrants.

Some stock-specific performance from the Auto Index cannot be ruled out, as it is improving its momentum despite still being placed in the lagging quadrant. Pharma Index is in the improving quadrant and is expected to remain resilient as compared to the other groups.