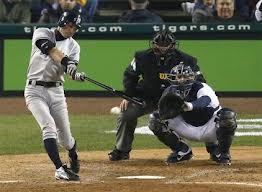 It’s spring and the baseball season is upon the Kingdom.  The Mariners are playing at Safeco Field again, and I happen to be watching the first season of HBO’s medieval fantasy series, GAME OF THRONES.  Is it just me or are both of these pastimes bursting at the seams with investor insights?

I was living in Seattle in 2004 when Ichiro Suzuki won the American League crown with a batting average of .372.  He was not known as a home run slugger, but gosh was he consistent in getting on base.  He only hit 8 home runs that year.  I’ve always considered Ichiro my kind of trader.  In GAME OF THRONES, the House of Lannister has two brothers.  Ser Jaime Lannister, the “Kingslayer” and older brother, is the bold swordsman.  His younger brother, Tyrion, is a clever dwarf with a keen mind.  In my reckoning, Tyrion is the Ichiro Suzuki of the miniseries storyline.

The parallel here to trading is that I’ve known investors whose personalities align closely to Jaime Lannister.  They are big bold extroverts full of confidence who happen to stumble into the market just at the bottom of a major trough.  They execute a couple of ten-banger trades and then, lo and behold, are convinced that they have been touched by the hand of God and are indeed blessed with unique and powerful super hero trading skills.

The challenge and the risk in this scenario is that once having tasted the honey nectar and drunken from the ten-banger chalice, one is never again satisfied with a small victory in the stock market.  The bold swordsman’s impulsive and emotionally driven trading has yielded a big prize.  He is now only interested in swinging for the fences and taking big risks to replicate his epic victory.  Since he never took the time to build a solid foundation of investment knowledge, he doesn’t understand how to prepare for losses.  The only tool in his kit is a hammer, and he sees every trade as a nail.  Therein lies the bottomless pit and addiction-based downward spiral of the homerun hitting investor.

Contrast the brash Jaime Lannister to his brother Tyrion who has no aspirations of being the Barry Bonds of the medieval stock market.  Being the wise listener and less extroverted, Tyrion has a shrewd mind that he constantly feeds with books.  More analytical and rational than his brother, he keeps his eye on the prize of winning the batting average crown.   While his older brother is the single hammer player, Tyrion is more like a plumber with a toolbox of useful investing implements.  He clearly knows when to use each of his tools.  You can see how he carefully navigates the royal court, balancing risk and reward with his every move.  His inevitable payoff is down the road, and he’ll no doubt get there taking small deliberate steps.  Achieving regular victories – and perhaps even a home run or two along the way – he’s never in doubt of accomplishing the ultimate prize.

There are three lessons to be learned from my little tale.

Personally, I’ve found that my investment enthusiasm is maintained and lubricated by regular base hit types of trading victories, and that is where I try to keep my focus.