It was a solid week for the markets with the S&P 500 index ($SPX) advancing above its key 200-day moving average which was a major area of possible upside resistance. With a positive relative strength index (RSI) and stochastic oscillator, the markets are poised to advance further as we enter an earnings season that's been marked by results being rewarded despite not being particularly strong. 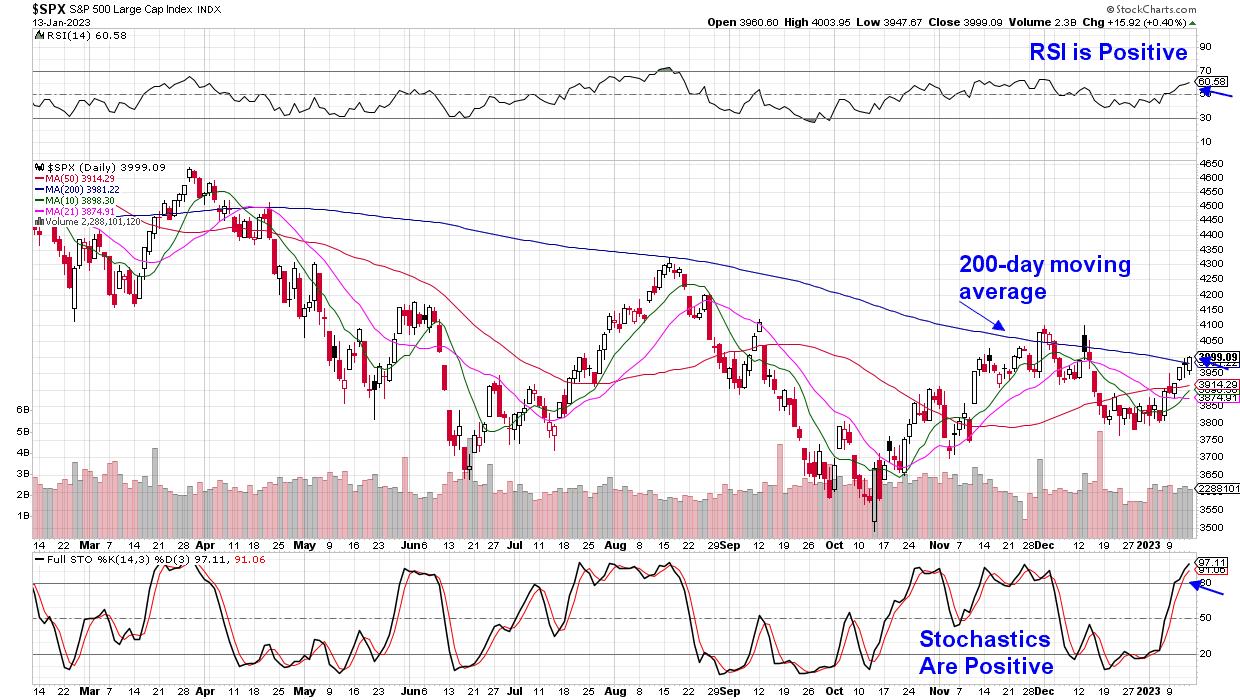 The Consumer Discretionary sector was the top performer helped by a double-digit rally in retailer Amazon (AMZN) which remains 43% below its 52-week high despite the sharp gain. The stock was upgraded after news that every company can participate in the once exclusive free, two-day Prime delivery program.

Other retail stocks also rallied, as hints of lower inflation coupled with a Consumer Confidence report that put the number at a 10-month high, pushed the SPDR S&P Retail ETF (XRT) into positive territory. The longer-term, weekly chart shows the RSI now in positive territory with the moving average convergence/divergence (MACD) poised to turn positive as well. 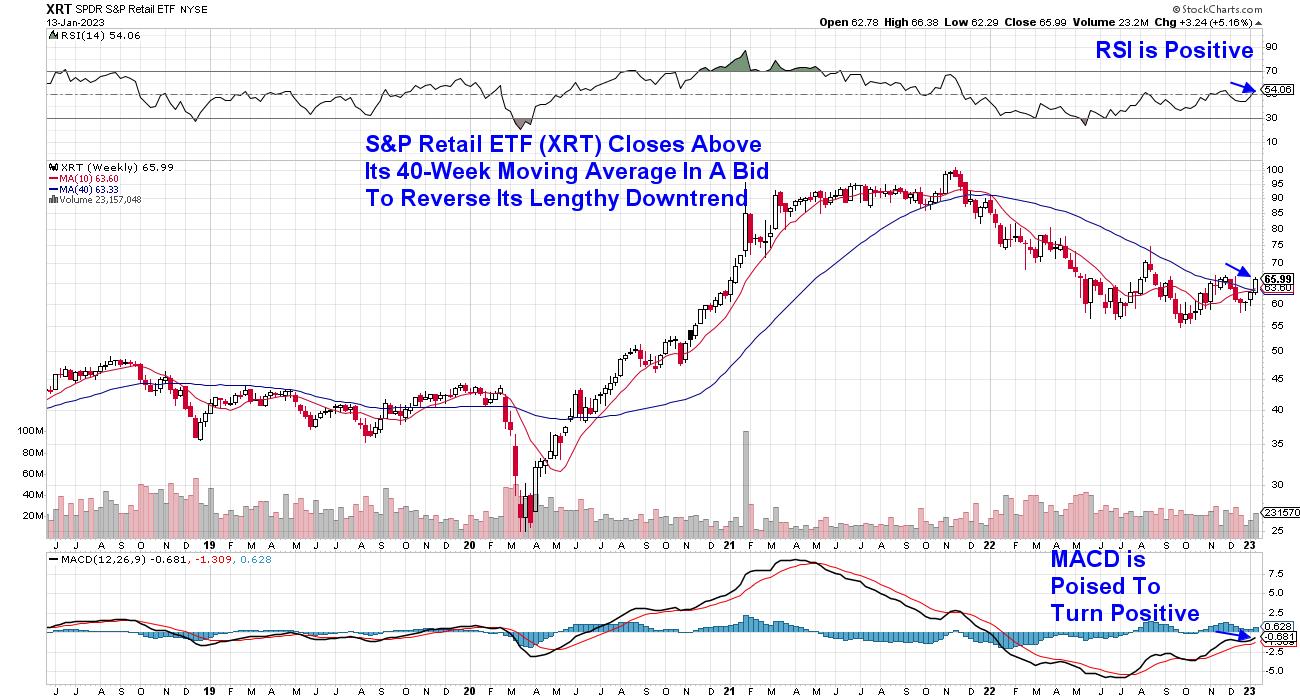 One standout area has been Specialty Retailers that manufacture or sell comfortable footwear. This would include companies such as Crocs Inc. (CROX) which manufactures shoes made with a proprietary plastic material and was one of 2022's fastest growing brands.

Subscribers to the MEM Edge Report were alerted to the stock in early December, after it was added to the Suggested Holdings List.  Since then, CROX has gained over 20% as analysts continue to raise estimates. Despite healthy gains, the stock trades at only 12 times trailing 4 quarter earnings which is well below its peers. 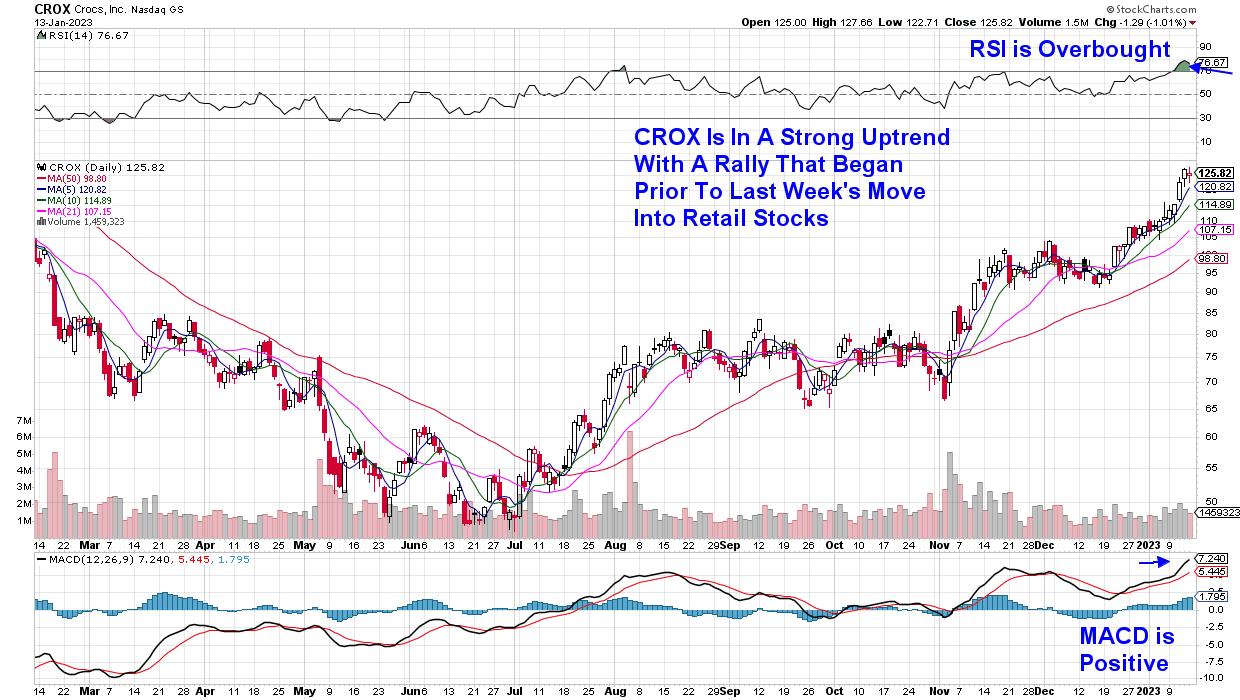 The running category has been an additional success story in the footwear industry as a staggering number of people headed outdoors as gyms closed amid the pandemic. Companies such as Deckers Outdoor (DECK) saw their Hoka brand of sneakers hit the one-billion mark over the past 12 months in a move that rivals sales in Decker's already popular Ugg footwear. 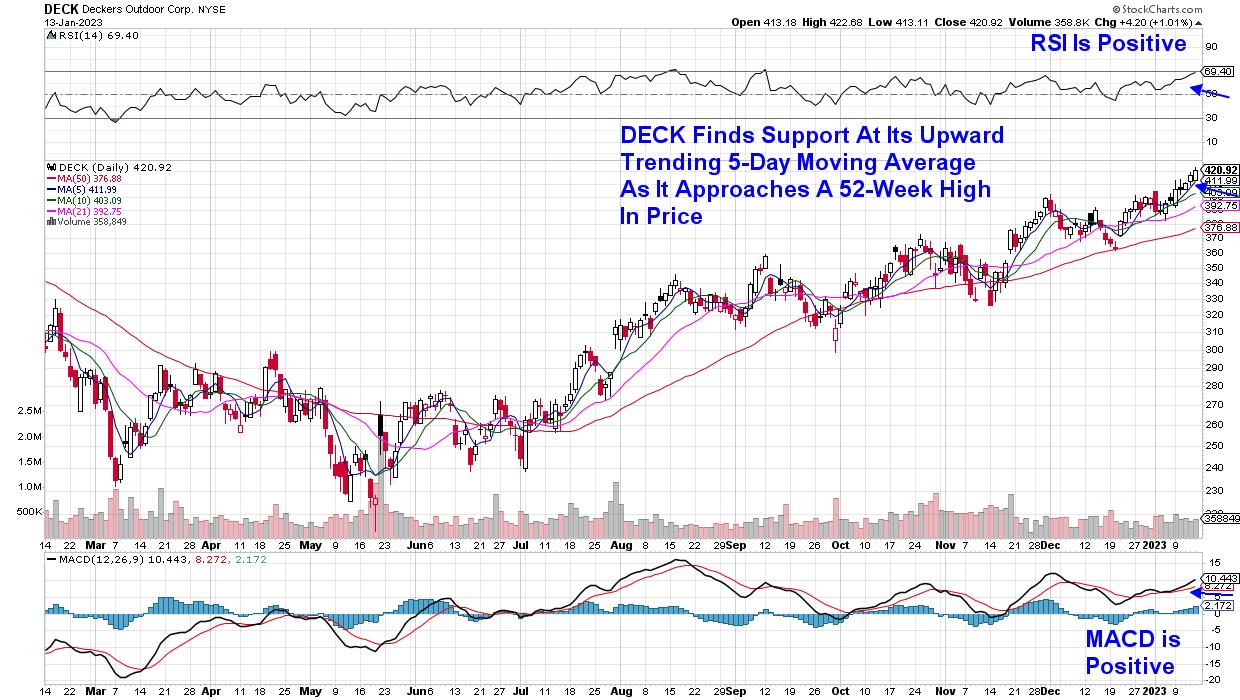 Well-known footwear company Nike (NKE) is also in a confirmed uptrend after gapping up in price on the heels of crushing earnings estimates in late December. Management guided growth estimates higher going forward as well, amid increased digital sales and inventory control measures. NKE is approaching an overbought condition at this time.

While each of these retailers are poised for further upside over time, newer areas within the markets have just begun their ascent as a rotation into Basic Materials and areas of Industrials is pushing select stocks into the beginning stages of an uptrend.

If you'd like access to those stocks, use this link here to access a 4-week trial of my twice-weekly MEM Edge Report for a nominal fee. You'll also receive insightful information regarding why these areas are trending higher, as well as my outlook going into the remainder of this year

You'll also be alerted to signals that the current bear market rally may be reversing so that you can preserve capital ahead of the true market bottom. Be sure and take advantage of the special offer above ahead of next week's critical economic data and other possible headwinds.