It's interesting how news affects the market. The negative information, paired with human emotion, sends the market frantically lower.

It is also interesting to watch how it creates a self-fulfilling prophecy. When people hear negative news, a common thought is "My goodness, I must sell before everyone else does." If enough act on this, they create a chain reaction. Initial selling leads to stops getting triggered as the price moves lower, which then snowballs as more and more people get out of the market. By thinking you need to sell before the market moves lower, you make it come true, which in turn makes the self fulfilling prophecy come true. 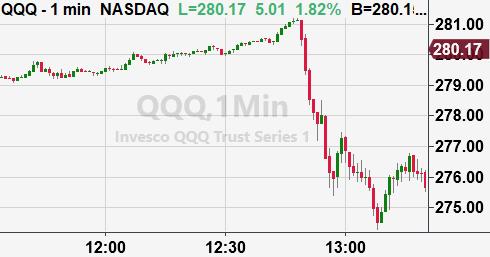 You can see this happen clearly on Tuesday around 12:45pm, when President Trump said to stop negotiations for the stimulus package until after the election.

Keeping in mind how emotions move the market will help you make more clear trading decisions, whether you're caught in a quick selloff or maybe you're watching a stock that has yet to make any substantial move. This can sound like common sense, but it's easy to forget when trading - and even more so if you're the one losing money.

This is not meant to say that people should not have sold hastily. This is to help people remember why they are doing it, and where the initial driving force behind the movement comes from.