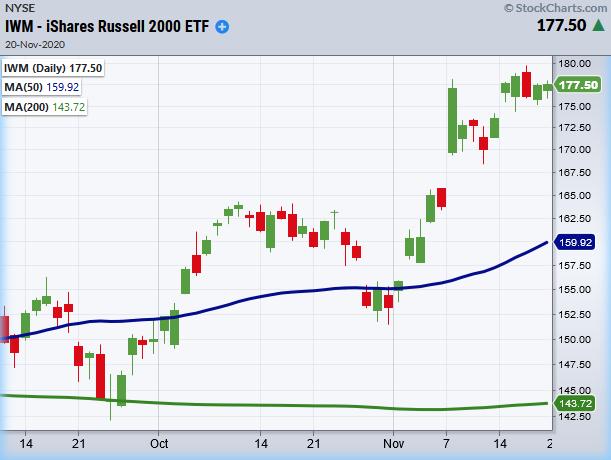 On Monday, we talked about positive vaccine news from Pfizer (PFE) and Moderna (MRNA) holding up the market. Friday proved the market was able to hold up through the week. And yet, the same day, many articles surfaced about the market's health related to the increasing state lockdowns and COVID spikes across the country.

While it's useful to keep in touch with the news and trending market sentiment, it can also work against you if you create expectations that may not be in sync with market action. Hence, how can we connect the news to this coming Mondays price action?

Regarding the past two week's price action, we can create a good set of levels to see if doom and gloom take center stage or new highs are on the horizon. The fact that three out of the four major indices are currently over their election range high (November 2nd-6th) is a good starting sign.

Dow Jones (DIA) sold off this week, yet is still holding above the pivotal low post-election of 289.19. If the market's worries infiltrate into this Monday morning, keep a watch on this level. If not, 300 is the next key price to break to the upside.

Lastly, the S&P 500 (SPY) needs to hold above its election range of 352.19, which also gives a good support area to lean on going back to mid-October.

The market is going through a tug of war, with more evidence pointing to price ignoring bad news rather than the other way around. With a short week ahead, consumer sales will also emerge as a big headline.

The market has proven one thing - it's not ready to give up, but it also feels like, at the same time, there's a nervous breakdown lurking in the shadows.