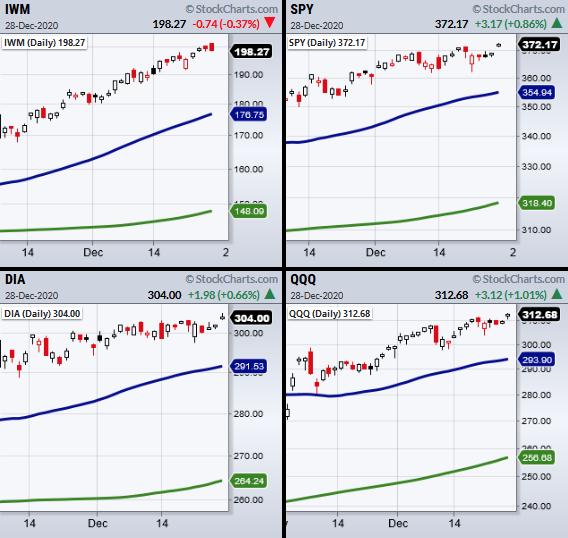 With another short trading week, it's best to stay cautious, as price action can get wacky towards the year's end.

Fund managers will rebalance their portfolios by selling losers and replacing them with strong performers to spruce up the look of their portfolio before the fourth-quarter end. Furthermore, many investors take extended time off the last week, which leads to decreased volume.

With that said, all the major indices except the Russell 2000 (IWM) held their gaps today. After the market opened, IWM immediately began to sell off. Though it tried to gain solid ground around the 199.00 area, it ultimately was unable to hold.

Now, this in of itself alone, is not that big a deal. What would be worse, though, and something to pay attention to, is if the Transportation sector IYT begins to fail.

With big caps and NASDAQ making new highs, we should be happy, right? Well, perhaps that is not a good reason to be sad. However, with big-caps outperforming the small-caps, the potential signal to watch for is overall weakness in the "inside" sectors, which translate more accurately to the real US economy. If IYT or the demand side starts to flounder, that would be a warning flag for sure.

In the meantime, let's not read too much into a one-day action on perhaps the slowest week of the year. At the same time, in a year where all rules were broken, do pay attention, just in case.