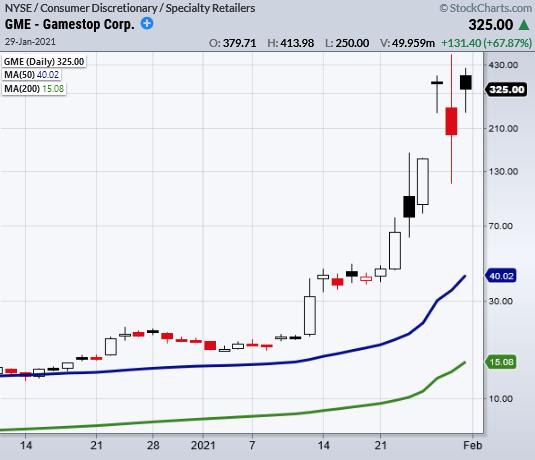 Out of the corner of my eye, a message pops up on my screen saying "Hold the line! Selling here means Wall Street wins!"

This is one of thousands of posts found on big social media platforms, which spurred from a Reddit page known as r/WallStreetBets (WSB), an online forum that has grown in popularity for their involvement in GameStop's (GME) huge price movement.

In just the past 3 weeks, GME has risen from $19 to all-time highs of over $500 in after-hours trading. Although the price now sits in the middle ground at about $300, the huge price increase left a path of destruction for anyone who had shorted GME.

Shorting shares takes the complete opposite position of buying a stock. When one shorts a stock, the profit is made off of the decline in price. The recent debacle involves Melvin Capital, a large hedge fund. They had a big, short position in GME, so when the Reddit crew began to buy, they were forced to cover much higher, thereby losing 30% of their capital.

The hedge fund was recently bailed out from the losses by Citadel Securities. That created an uproar with retail investors and WSB, who feel that while large institutional investors get bailout money, they continually get overlooked by regulators. Even worse, these regulators threaten to take away the ability to trade in a free market. Furthermore, WSB members have stated the media has labeled them as the enemy, since they were the direct cause of Melvin Capital's loss.

On Thursday, Robinhood, the popular brokerage platform, began restricting buying of GME and other popular stocks.

The major source of angst by retail traders right now is that they are tired of the corruption on Wall Street propagated by large institutions and corporations. Corporations have been able to borrow money at no interest, pay no or little taxes and, when they need a handout, get generous government bailouts. The retail investor feels, in a word, screwed.

The social media posts and hype have turned into a battle with institutional investors on one side and WSB plus retail traders on the other. Plus, it has become a cause célebre with many public figures.

Will short squeezing the big, short positions of institutional traders become a new trend or a new bubble? We say both. The new trend has begun with currently over 6 million followers on the WSB feed. Plus, even with the restrictions by Reddit and those of RH on buying GME etc., investors are finding ways around it and have even started a class action suit.

U.S. Representative Alexandria Ocasio-Cortez finds the restrictions "unacceptable" and there are even rumors that Citadel allowed short selling right before the ban on trading GME was announced. This is not done by any means. The social revolution now on everyone's lips, will only embolden the young traders who feel robbed of their rights, their money, feel cheated by boomers, hedge funds, bank bailouts, etc.

The bubble could emerge as per the lessons of the silver market in 1979-1981. Silver ran up from 5 to 50 or a 1000% move. The Hunt Brothers tried hard to corner the market. Eventually, the COMEX Board of Governors and the CFTC banned new buying, raised margins causing the Hunt Bros., as well as many hedge funds, to go belly up.

On another note, grab your pen and paper!! In this week's edition of StockCharts TV's Mish's Market Minute, Mish covers 25 stocks from several different sectors and gives you actionable information on how to trade them now that earnings is out of the way.