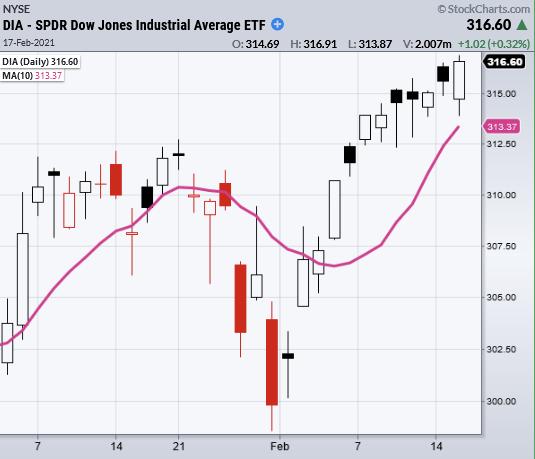 Wednesday could be a pivotal day for the market. With a gap down in the major indices, the market continued to sell-off until finding some late-day support, especially in the Dow, which closed green.

A key to what happens from here over the next few days could be decided on Thursday. Citigroup (C) came out and expressed that they see a 10% correction adding to the worries of many traders. With frothy conditions, that is understandable. On the other hand, should Thursday see a higher market, we will most likely also see a new round of buying.

Luckily, by looking at the technical of the major indices, we can plan what to expect and, more importantly, what to do if the market decides to head lower. With that said, charting is not a crystal ball, but I believe it is the next best thing.

First, let us look at today's index leader, the Dow Jones (DIA), which was able to close at new all-time highs. Even more, the DIA was the only major index to not break its 10-day moving average at $313.37. When it comes to support, $211 is an important area to watch, as there has been much consolidation from January there. 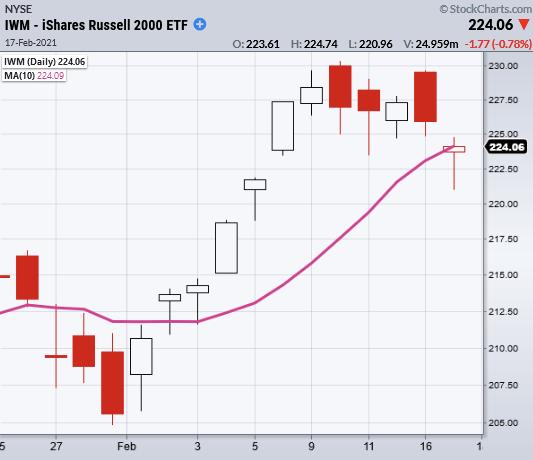 Technically, IWM had a potential topping pattern. Nonetheless, we have seen that type of pattern many times over the last few months, and today's volume did not indicate extreme fear. 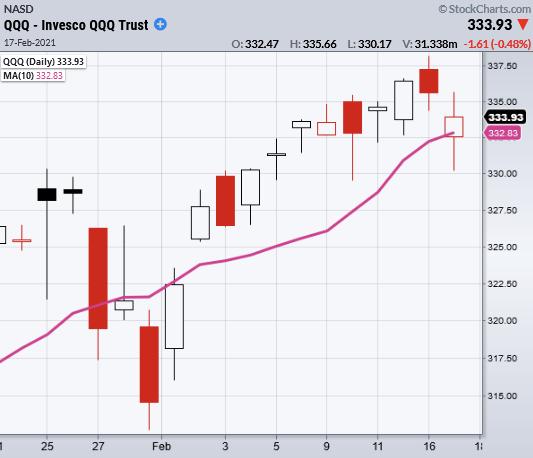 The Nasdaq 100 (QQQ) has the clearest support price to watch. If you draw a line at $329.50, you can see multiple support points align on the chart. This creates a pivotal area to watch for support to hold or break. However, with the price currently back over its 10-DMA at $332.83, the highs are not far off. 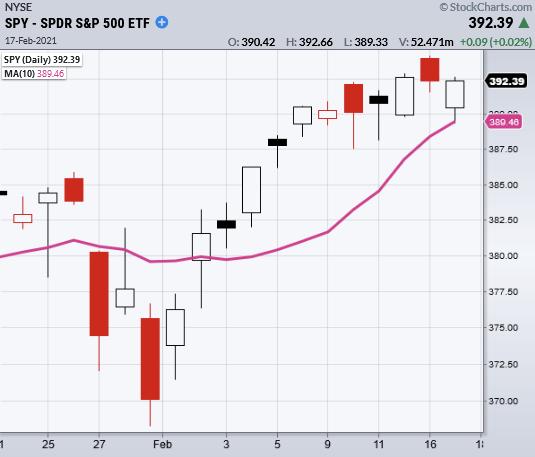 Technically we have great levels to watch for the market to hold, but we also can't forget that we have underlying support from the Fed. Today, the Fed again announced that they will keep an accommodative stance. Yet, for the first time, a few members said that inflation could be become a factor.

Perhaps even bigger than the Fed is the Biden administration considering not only stimulus, but also college loan cancellation and reparations for African-Americans. More printing, whether from the government or the central banks, will mostly like put more money in the hands of the Reddit and Clubhouse traders. And with hearings on tap Thursday, we will be closely tuned in.