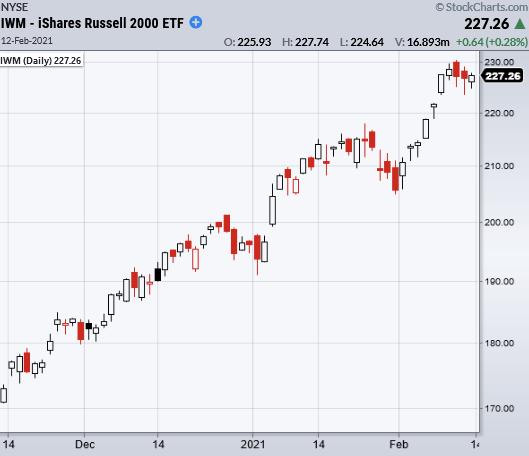 The Economic Modern Family members are all in a bullish phase, with transportation (IYT) leading the charge. A rundown of each member shows Russell 2000 (IWM) putting in some consolidation over Monday's low of 223.40.

Moving on to transportation, or the demand side of the economy, IYT started the week off with a small-range day Monday, but held its ground, proving its stability over the 50-day moving average at 223.61. Friday was a pivotal day for IYT, which broke to new weekly highs. Furthermore, IYT is close to all-time highs at 232.97.

XRT, or Granny Retail, has also done some consolidation work between $75 to $80. Her return to normalcy after a price move up to almost $100 on 1/28 makes trading securities/stocks in this sector much easier. When trading, it is important to look at risk vs. reward, but, with crazy price action as seen in the retail space, it can be tough to plan those levels out in a trade.

Next comes Regional Banks (KRE), who has been holding new support at $60. Knock on wood! If KRE continues upwards, its next test comes from resistance around $63-66 area. (This resistance was created from highs going back to 2018.)

Next, we have Brother Biotech (IBB), who sits between support at the 168 area and highs at 174.04. Then we have Sister Semiconductors (SMH), who yet again made new all-time highs Friday.

Considering how popular new tech issues have become this year and from the surge in resources needed for cryptocurrency mining, the SMH sector looks perfectly positioned for the upcoming year.

This week on StockCharts TV's Mish's Market Minute, Mish covers another 25 top rated stocks that have reported earnings. Her analysis includes actionable advice, with a review from one of last week's picks, Gilead Sciences, Inc. (GILD).