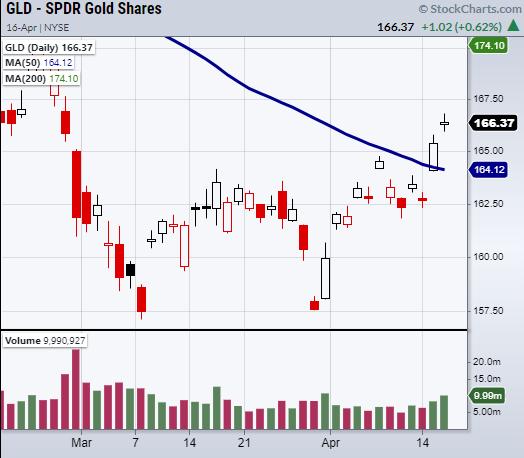 Last Wednesday, Mish went live on Fox Business' Making Money with Charles Payne and gave out a very bold pick. Or, at least bold in the eyes of the general populace, as most of the media's coverage has focused on big tech and the Crypto space.

Having said that, on Thursday, Gold gapped up and finished this week with a second close above its 50-day moving average at $164.12.

So, why did we pick gold before its big move up when most of the media's sentiment was lackluster? Here are three main reasons.

The first is rising interest rates. Governments and central banks around the world have borrowed huge amounts of money to revive the economy. Without any clear plan to dig the U.S out of debt, there is rising worry that the U.S dollar could be under enormous pressure. This, in turn, would boost gold, as its limited supply in the face of inflation can be very appealing.

The second is a hedge against the fear of the unknown. Currently, there is rising tension in the Middle East between Iran and Israel. If the situation were to escalate, it is unclear how the current administration would react. This is a big unknown for investors who can use gold as a safety play/hedge while they wait for more clarity.

The third is technical analysis. By taking a look at the daily chart above, you can see a formation of a double bottom pattern created from 3/8 and 3/30. Each bottom was followed by a large move higher, either by a gap or a large candle range. Furthermore, the increased volume on 3/30 showed that a large number of buyers came in to support the move back up.

For these reasons, we should keep a watch on gold to continue upwards. However, if gold were to turn around and head lower, the main support would be from the double bottom price level at $157. Ideally, it should hold over the 50-DMA area at $164.12.

With the potential of coming stagflation for the rest of 2021 and 2022, Mish goes through all of the different commodities and tells you what to trade, how and when in this week's edition of StockCharts TV's Mish's Market Minute.