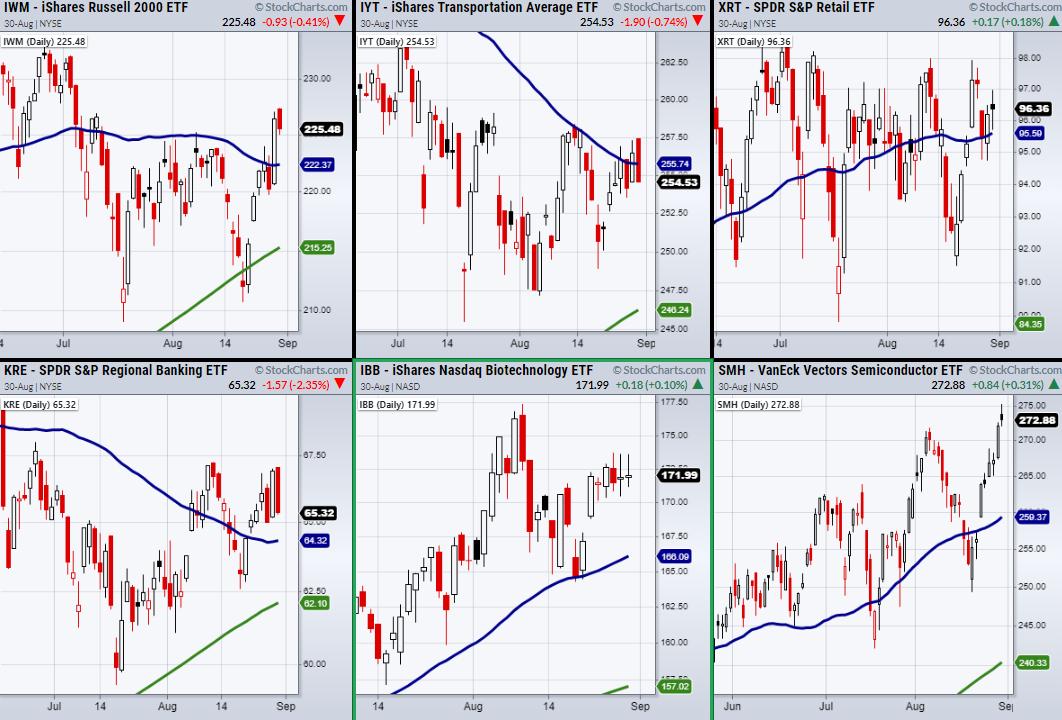 While the large-cap indices continue to lead the market, the Economic Modern Family made little progress. However, each Family member is standing its ground and may only be lagging when compared to the Nasdaq and SPY's stellar performance.

Looking at Mish's Family, which includes 5 key sectors and 1 major index, we can see that the Granddad Russell 2000 (IWM) is testing its pivotal $225 support level, while the Transportation sector (IYT) can't seem to stay over its 50-day moving average at $255.74. Although IYT is under its 50-DMA, if it holds above the low of 8/26 at $253.48, it could be forming a small base before its next move higher.

Because the tech sector is again leading the market higher as shown by the Nasdaq 100, Sister Semiconductor (SMH) has also cleared to new highs. While shortages of computer chips/semiconductors remain a problem, investors' sentiment in the space looks to be improving. This could be showing that chip makers are finally beginning to scale up production.

On the other hand, both Grandma Retail (XRT) and Prodigal Son Regional Banking (KRE) sectors have their 50-DMAs nearby. For both, the 50-DMA is a pivotal area that needs to be held.

The last member is Brother Biotech (IBB). Currently, IBB is sitting in a bullish phase over the 50-DMA and needs clear short-term resistance at $173.69.

With that said, the overall picture of the Family is bullish, with only the transportation sectors sitting in a caution phase under its 50-DMA. In the last couple of weeks, we've seen market sentiment quickly switch from caution to bullish. Now we should watch for Mish's Family to stay within a bullish phase and for its members to pull away from their 50-DMA. This will prove that the Family, while lagging the SPY and QQQ, is stilling following the trend higher. Furthermore, if the Family stays over its 50-DMA we can expect a less volatile market environment.

On the Monday, August 30 edition of StockCharts TV's Your Daily Five, Mish breaks down the key indexes and sectors of the market to help you plan your next investment plays.

On the latest edition of StockCharts TV's Mish's Market Minute, Mish goes over how to pick stocks using the Momentum Indicator on StockCharts.com.