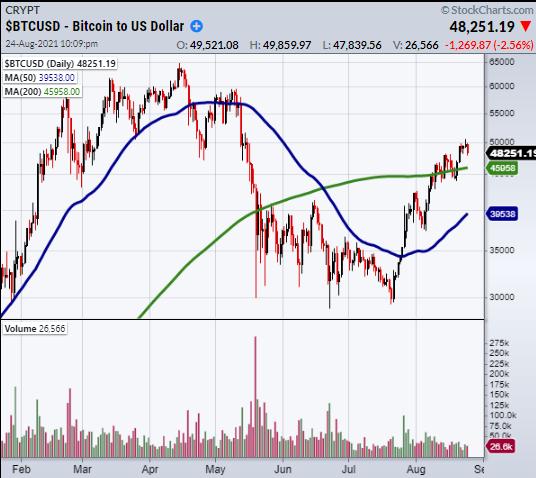 Bitcoin continues its rally up with a recent break over the 50K price level. However, many investors are watching for Bitcoin to clear 51K as the next hurdle. With that said, if we are expecting Bitcoin to run higher, we should keep in mind recent support levels, along with volume patterns seen from the beginning of this year.

For support levels, the 200-DMA is an important moving average at 46K. However, because Bitcoin has traded through the 200-DMA multiple times, the best current support level to hold is 44K from the low of 8/19. Although Bitcoin has been trending higher, the past month has seen multiple small pullbacks, each without any considerable volume spikes. Volume has also been lower compared to the initial push to the 50K price range dating back to February 2021.

A large part of volume decline could be from months of consolidation Bitcoin went through and, therefore, gave investors and institutions the chance to slowly load up on the currency. Having said that, if Bitcoin continues higher, it will enter a choppy zone from 50-60K. This could be tough to push through on current average volume and will likely require large spikes of buying to push past resistance ahead.

If buying does not accelerate, instead of volume entering from more buying, it could be in the form of selling from increased volatility. However, that does not mean Bitcoin would completely selloff. Instead, buying could enter from dips, as seen in the beginning of the year, after a quick correction.