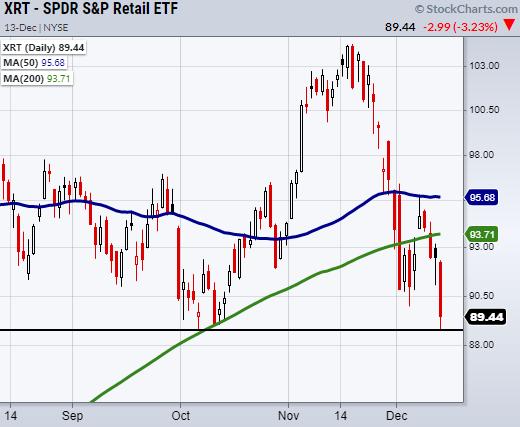 Tis the season for a Santa Claus rally.

Though the reasons for a Santa Claus rally are debatable, the main school of thought is that, because there is less institutional participation in the market as many take time off to travel, the stock market is left in the hands of the retail investors, which tend to be more hopeful and cheerier. However, this Christmas is far from average, laying doubt on the potential Christmas rally, which normally takes place in the last two weeks of December. With mixed information on the new variant and a weak supply of goods, shoppers could be less motivated to spend this holiday.

One worrying sign is from the retail sector (XRT), which is breaking under recent lows around $89.96. However, if the retail space is going to make a turnaround, it's going to need to hold over $88.75.

Having said that, the retail space is not sticking out as the only weak sector. Looking at other key sectors within Mish's Economic Modern Family, transportation (IYT), regional banking (KRE), and semiconductors (SMH) are also weak. This means that the retail space is not being singled out as prices are dropping across the board.

With that said, if there is going to be a Santa rally this year, we can watch for signs that XRT can hold these recent lows, along with other key sectors from the Modern Family.

On the latest edition of StockCharts TV's Mish's Market Minute, Mish gives you an overview of her favorite chart patterns that you can use to help you trade. She reviews flags, gaps, consolidation and wedges, just to name a few. This is an episode you'll want to revisit many times.