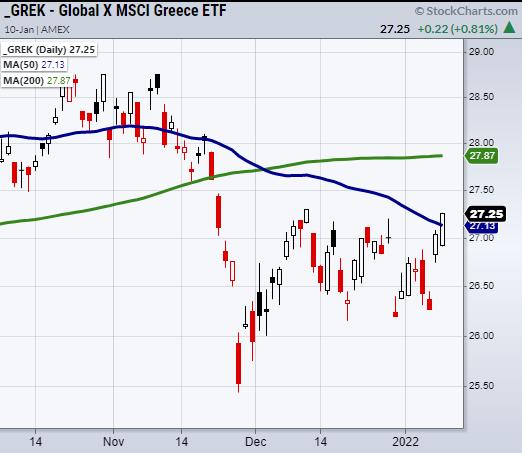 Last week, Mish released her yearly outlook report, with dozens of ideas on trends and trades going into the new year. Greece ETF (GREK) is one of those picks.

While the major indices were selling off Monday, GREK held near an important breakout area. Though Mish has called GREK the sleeper trade of the year, it could be waking up earlier than expected. Looking at the above chart of GREK, we can see that it has made a close over its 50-day moving average at $27.13 and came just shy of clearing its range high at $27.30. Its current range is from $26.15 to 27.30. If it's able to clear and hold over $27.30 on Tuesday, this can be a new support level going forward. Additionally, a second close over the 50-DMA would put GREK in a recuperation phase showing that buying interest is growing.

With that said, GREK could also get boosted from the major indices. Though the four major indexes gapped lower Monday, each was able to rally near Friday's closing price. While the indices weakness does merit extra caution, we should now watch for the indices to follow through with strong upside price action on Tuesday.

On the latest edition of StockCharts TV's Mish's Market Minute, Mish explains the "Sea Change" with the Federal Reserve policy and what that means for the market. 2022 will be a year where you really need to think before you make investments -- you'll definitely not want to miss this episode!