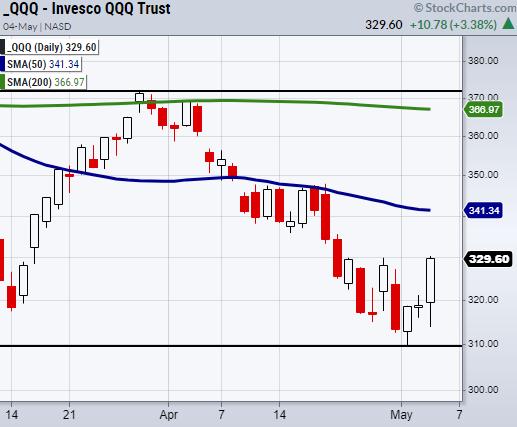 The rate increase came in, as expected, at half a percent, showing that the Fed is going for the safest play instead of pushing for a .075% increase.

With that announcement, the market made a late-day rally. While all the major indices have similar price action, we will focus on the tech-heavy Nasdaq 100 (QQQ), which was able to clear its 10-day moving average at $323.12. With the QQQ coming off recent lows and with a close over the 10-DMA, this does present a good short-term trade opportunity.

Anyone who is looking for long-term trades will need to worry about overhead resistance, as the market has been rangebound recently. To get a better understanding of this, we can look at the above chart. The most obvious risk area based on a daily chart of the QQQ is the recent low at $309.65. If we make a trade with a stop-loss around $309.65 and enter at today's closing price of $329.60, based on a 2/1 risk-reward, we will take a profit target near $369.50. That is just over the 200-DMA and right under key resistance from the previous high in March at $371.83.

This isn't a bad spot for a profit target if the QQQs can get through the 50-DMA at $341.34. With that said, this is based on Wednesday's closing price. If QQQ gaps up higher on Thursday, this trade would not look so appetizing, as the first target would then be past key resistance. Also, we wouldn't want to buy QQQ near its upcoming resistance level at the 50-DMA.

All in all, QQQ is a good trade example; however, if risk/reward doesn't align, it's better to look for another symbol to trade or wait for a better entry price.