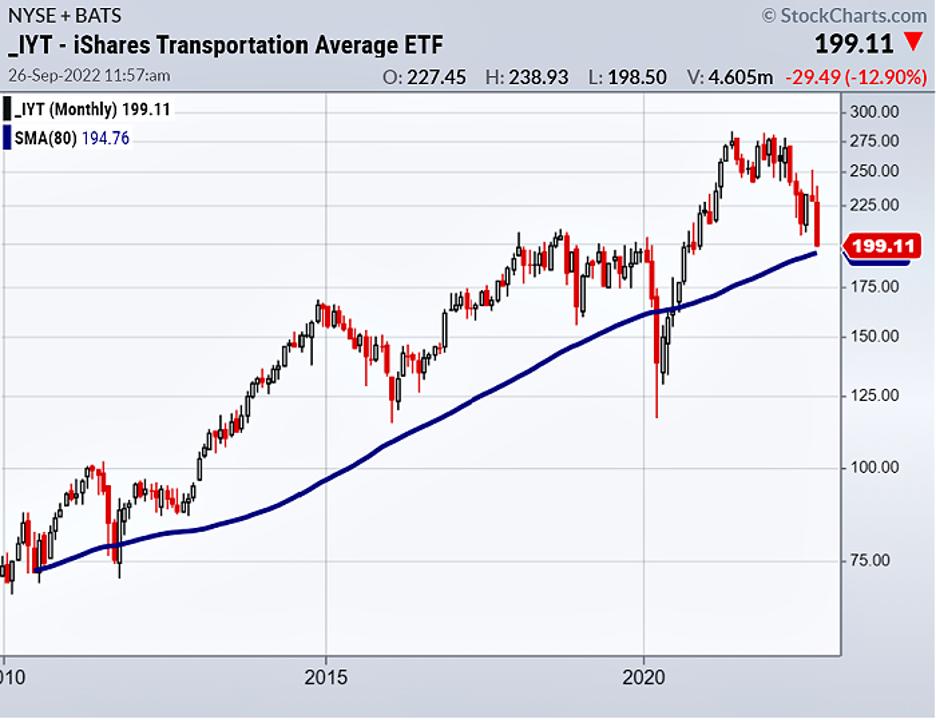 What makes this moving average so important right now is that three of the Economic Modern Family members are testing it. The three members, Granddad Russell 2000 (IWM), Grandma Retail (XRT) and Transportation (IYT), well deserve their status as what Stanley Druckenmiller calls the "inside" of the U.S. economy. In fact, the components of the modern family were put together before we heard Druckenmiller's viewpoint. We have observed how predictive they all are in helping us see in advance the next big market direction. Hence, these "inside" indicators -- right now -- are all sitting just above a 6–7-year business cycle low.

For the purposes of this daily and because we have featured this sector a lot lately, the chart of IYT is a perfect example of this moving average and what to watch for. Except for the brief blip in 2011 when the government shut down, and then again during the pandemic, IYT has sat above the dark blue line for 11 years. Currently, that line sits at the 195 area. The same is true with IWM and XRT, both marginally holding their monthly MAs.

So, watch IYT to either hold, and begin a rally possibly back closer to 220, or for IYT to fail 195, in which case we see the whole market selling off further.

To note, the other family members, such as Sister Semiconductors (SMH) and Prodigal Son Regional Banks (KRE) are still sitting well above the monthly MA. Big Brother Biotechnology (IBB), however, is now trading below it. And not in the family, but still notable, is the REIT sector (IYR), also sitting below it. SPY has the same MA, only that one sits at 310 (a long way off).

Incidentally, junk bonds broke down under this moving average in November 2021. The market has been slow to take junk bond's hint.

For more information on how to invest profitably in sectors like biotech, please reach out to Rob Quinn, our Chief Strategy Consultant, by clicking here.

A business cycle is about 6-7 years - where are the indices now and what should you watch for? Mish discusses this question in this appearance on Fox's Making Money with Charles Payne.