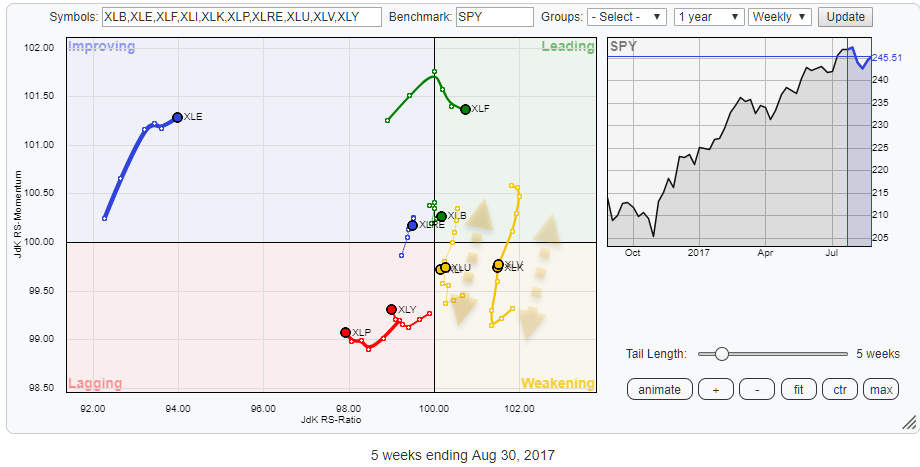 The Relative Rotation Graph above shows the US sector universe based on S&P 500 indices (ETFs).

Two sectors stand out on this chart. These are Energy (XLE) inside the improving quadrant but at low levels on the JdK RS-Ratio axis, and Financials (XLF) inside the Leading quadrant which has just lost a bit of relative momentum (JdK RS-Momentum scale).

Inside the lagging quadrant both Consumer sectors, -staples and -discretionary are moving lower on the RS-Ratio scale more or less in tandem and recently picked up a bit of JdK RS-Momentum.

The remaining sectors are clustered around the center (benchmark) of the chart.

Inside the weakening quadrant, two sector pairs draw the attention these are XLK and XLV (furthest to the right) and XLI and XLU (close to 100 on the RS-Ratio axis). Both pairs are moving in opposite direction and are at almost the same spot on the Relative Rotation Graph. Worth a further look. 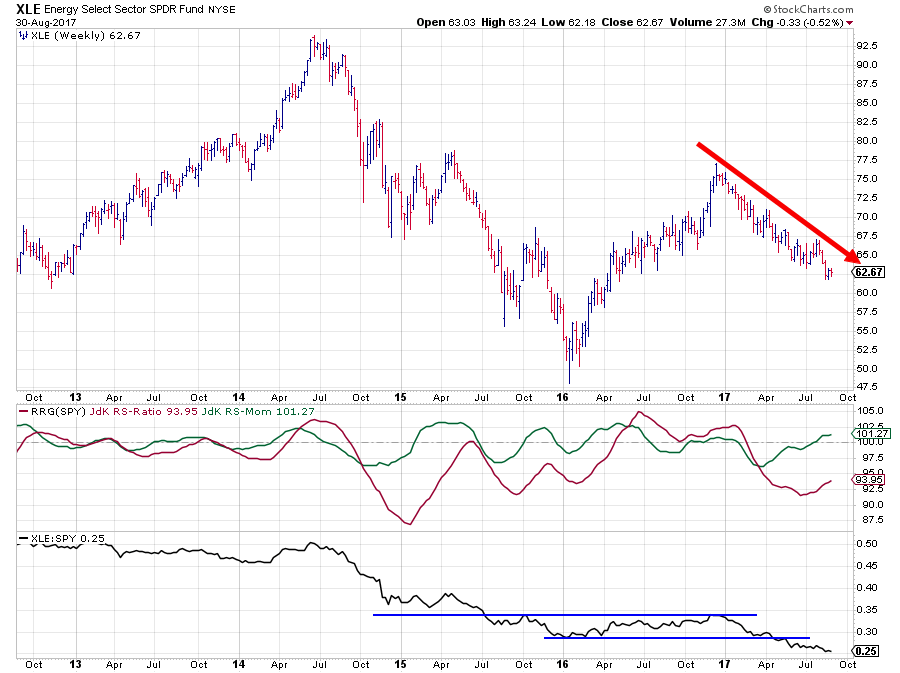 Based on its position on the Relative Rotation Graph, the Energy sector remains the weakest inside the S&P 500 Index.

XLE is positioned far away to the left around 94 on the RS-Ratio axis but second highest on the JdK RS-Momentum scale and inside the Improving quadrant. The ONLY sector inside the improving quadrant at the moment together with XLRE which is almost on the benchmark and has much less significance.

Despite the high position on the RS-Momentum scale and the relatively long tail over the past five weeks, there are doubts about the ability for XLE to keep up its current momentum and rotate further towards the leading quadrant.

What I have learned from research over the past months is that the odds for a tail to start turning seem to be higher when the distance between the most recent observations on the tail is getting shorter. This can be observed very well when you use the animation function on the RRG charts to scroll through history.

Very often, but as usual (unfortunately) not always, you will see the tail on a sector getting shorter before the actual turn sets in. More and more I am getting convinced that (length of) the tails on a Relative Rotation Graph holds a lot of valuable information with regard to trend strength and -persistence.

With the past four observations on the XLE-tail clustering closer together and the inability to maintain the pace on the upward momentum, the odds seem in favor for a rotation inside the improving quadrant, back down towards and into lagging. 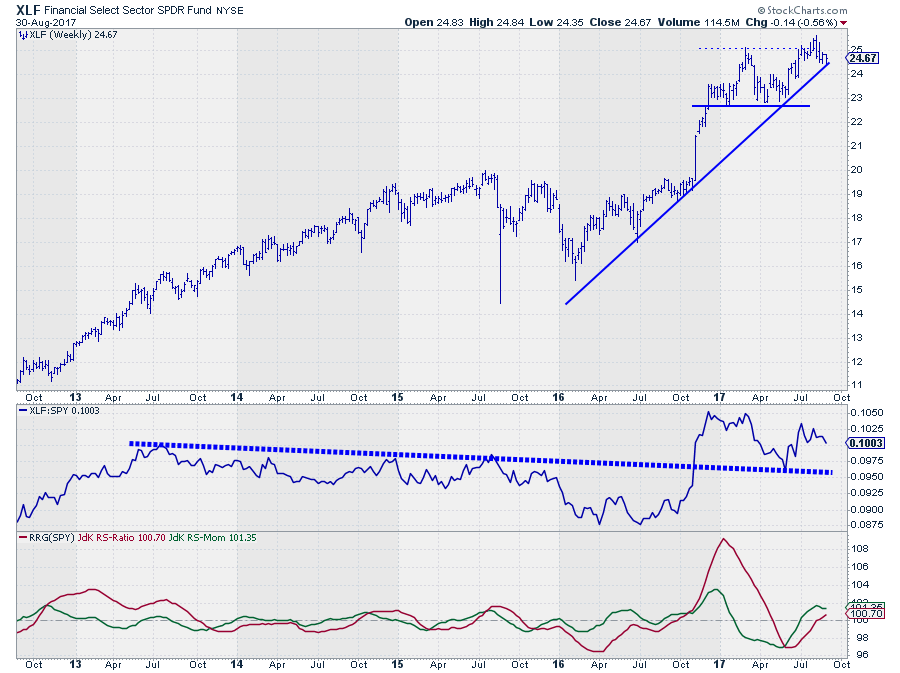 The further to the right or the left on the RRG plot, the stronger or the weaker the (relative) trend.

XLF has just entered the leading quadrant but almost immediately started to lose relative momentum. Not the best of rotational patterns. Include the fact that the most recent observations are getting closer together and doubts begin to arise about the sustainability of this trend.

Unfortunately, it was not able to hold above that breakout level and XLF dropped back below the former resistance level and is now hovering above the rising support line. A break below that support line will signal weakness at least for the short term and it will probably send XLF down to the horizontal support level just below $ 23.

On the relative strength chart, XLF was not able to break above its previous peak but it was able to set a higher low which leaves us in an unclear situation. Taking out the slightly down sloping resistance over the recent peaks will signal a continuation of the uptrend, while a break below the recent low will break the rhythm of higher lows.

So, despite the recent move into the leading quadrant, there is some short-term doubt about the ability for XLF to continue this rotation. A break above falling resistance on the RS-line will be the needed to trigger the much needed upward momentum to achieve this.

I am looking for XLF to turn back to a RRG-Heading between 0-90 degrees before adding or getting into overweight or long positions at this point. 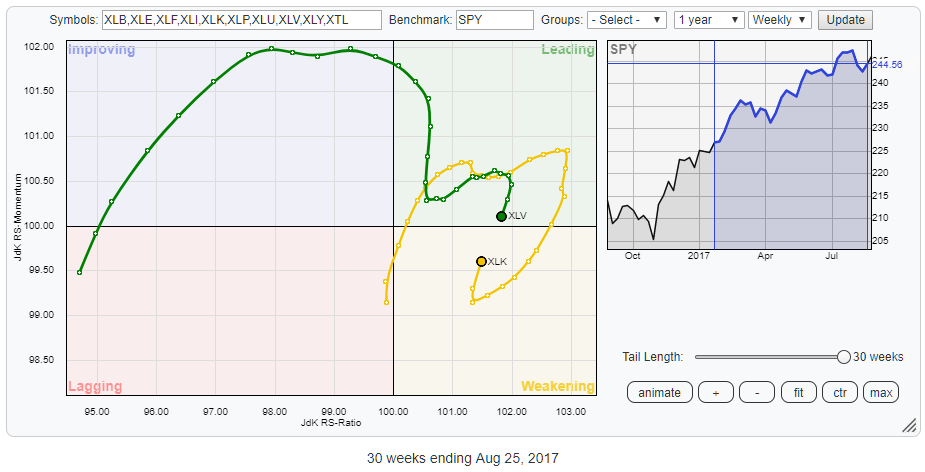 On the RRG at the top of this article, you see XLK and XLVoverlapping each other at almost the same position on the RRG.

The RRG above is back-dated one week in order to better distinguish between the two sectors, especially as XLV was still inside the leading quadrant at that time, causing the tail to be painted green.

The opposite rotation is very well visible and became stronger over the past few weeks. Despite the opposite rotation, these are the two sectors at the highest RS-Ratio levels at the moment. Meaning both deserve overweight positions based on their strong RS-Ratio level but XLK is showing new signs of strength while XLV is going through some, temporary, weakness. 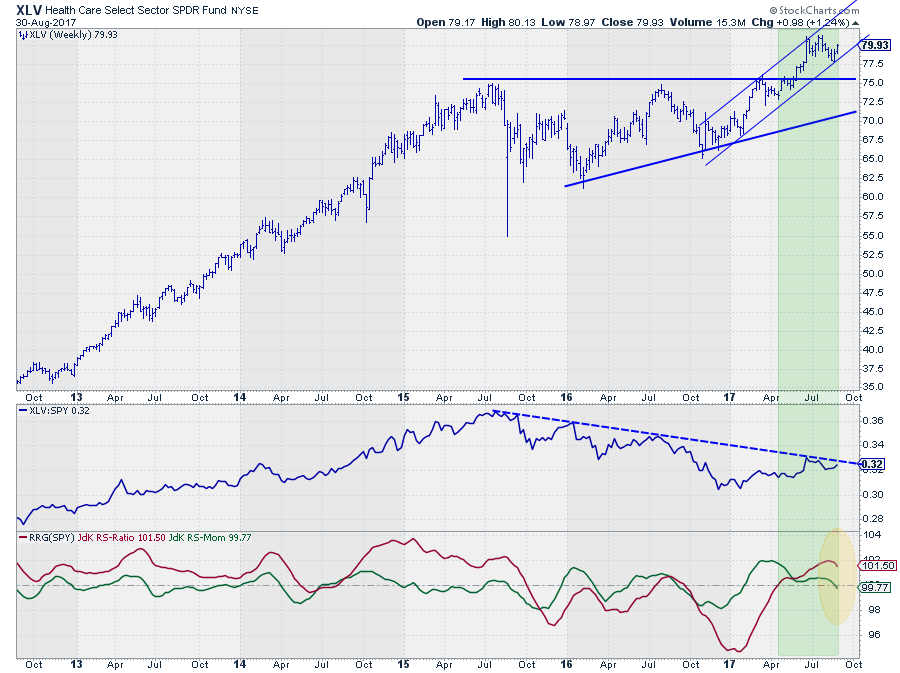 The Health Care sector only this year, late May, managed to break to new highs on the price chart. On the relative chart, however, the sector is still way below its peak which was set in 2015.

Before the upward break in price, the relative line started to move gradually higher off its early 2017 lows, pulling the RRG-Lines above 100, positioning XLV inside the leading quadrant since early April.

At the moment RS is pushing against the falling support line which keeps RS for XLV under pressure for now causing JdK RS-Momentum to roll over and push XLV into the weakening quadrant.

As far as I can judge from these charts in combination with the position of XLV on the RRG, an upward break of the RS-Line above its resistance is needed to fuel more relative upside to keep XLV on the right hand side of the RRG and make it turn back up into the leading quadrant. Failing to do so will very likely cause the rotation to continue towards and into the lagging quadrant. 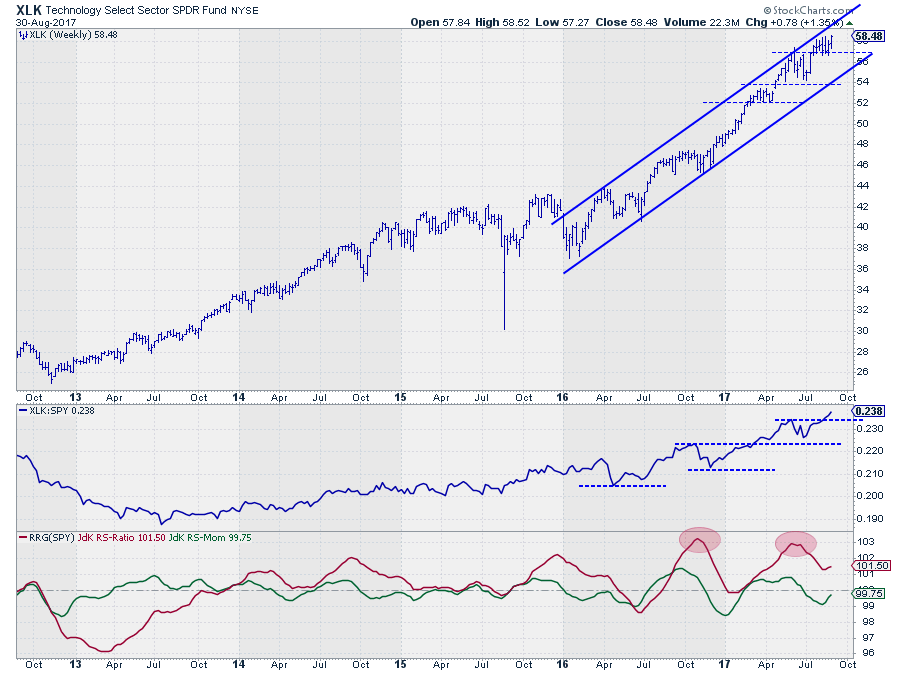 The Technology Sector is showing some completely different charts compared to Health Care.

Strong uptrends on both charts, relative and price, and XLK breaking to new highs on both. Pretty much the best of both worlds.

With RS-Ratio well above 100 and RS-Momentum turning back up from below 100 are causing the upward rotation inside the weakening quadrant signaling that a new up-leg within an already strong relative trend has started.

An extra bit of good news is that the recent corrective move took the RS-Ratio line down off its extremes which means that there is now enough upside potential again for RS to run higher before reaching "nose bleeding area" again. 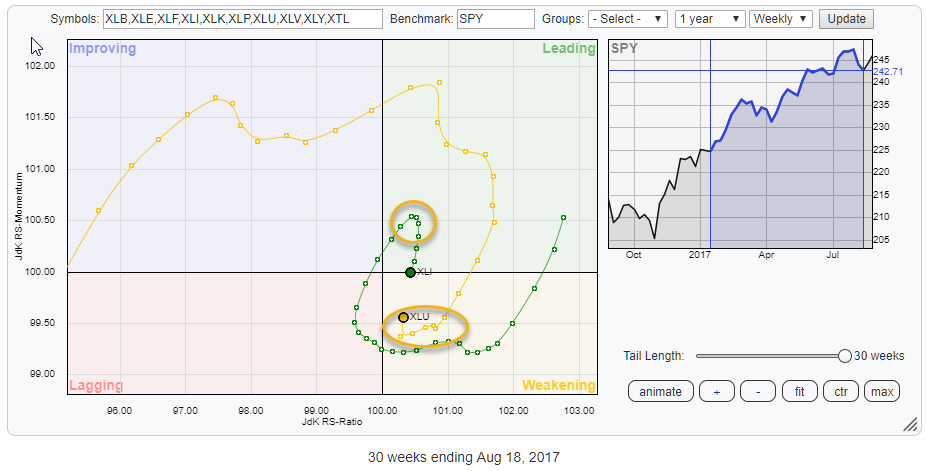 Just like the XLV-XLK RRG previously, this one shows the rotation for XLI & XLU. To get a better visibility I have shifted the tails back a few weeks when XLI was still inside leading and therefore has a green tail. When you animate the rotation you may note that these two sectors very often rotate completely opposite of each other.

With XLI dropping into the lagging quadrant from leading and XLU turning backup inside weakening and on its way to the leading quadrant again this rotational pattern suggests that a new period of outperformance for Utilities over Industrials is underway ... 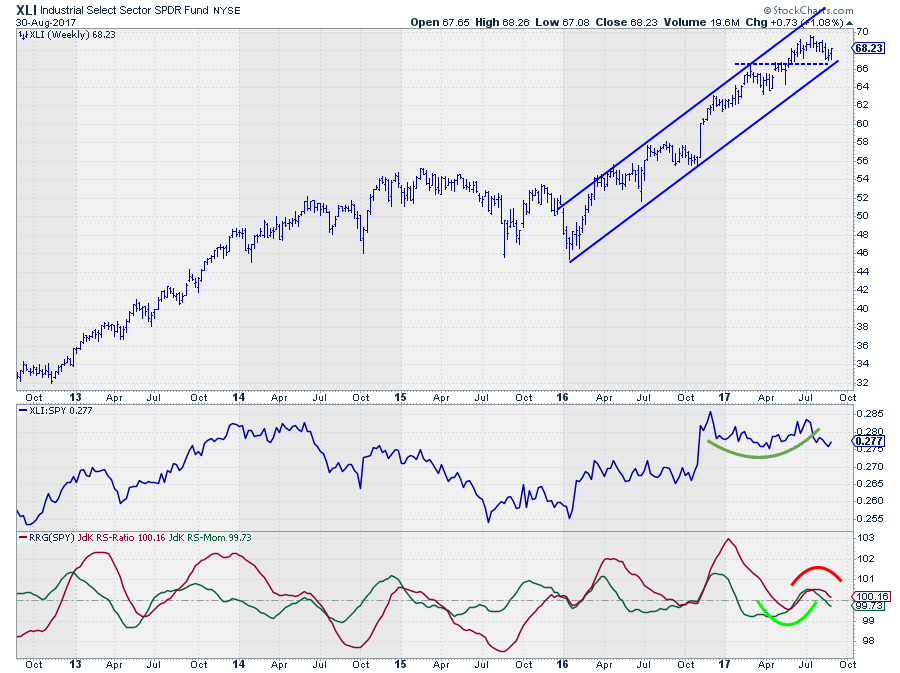 The price chart of XLI is still in decent shape. The rising trend channel is intact and the rhythm of higher highs and higher lows continues. At the moment, XLI seems to be bouncing off a double support level offered by the rising support line and the level of the previous peak.

The relative picture is a bit different. The RS-Line did not manage to push beyond its late 2016 peak recently and is only barely managing to hold up above its recent low. A trend line drawn under the lows since early 2016 is now broken.

This reflects on the RRG-Lines which both are rolling over downward with RS-Momentum already below 100 and RS-Ratio not far away from crossing that threshold.

Given the proximity to the 100-level on the RS-Ratio axis and the current RRG-Heading expect Industrials to rotate further down and into the lagging quadrant in coming weeks. 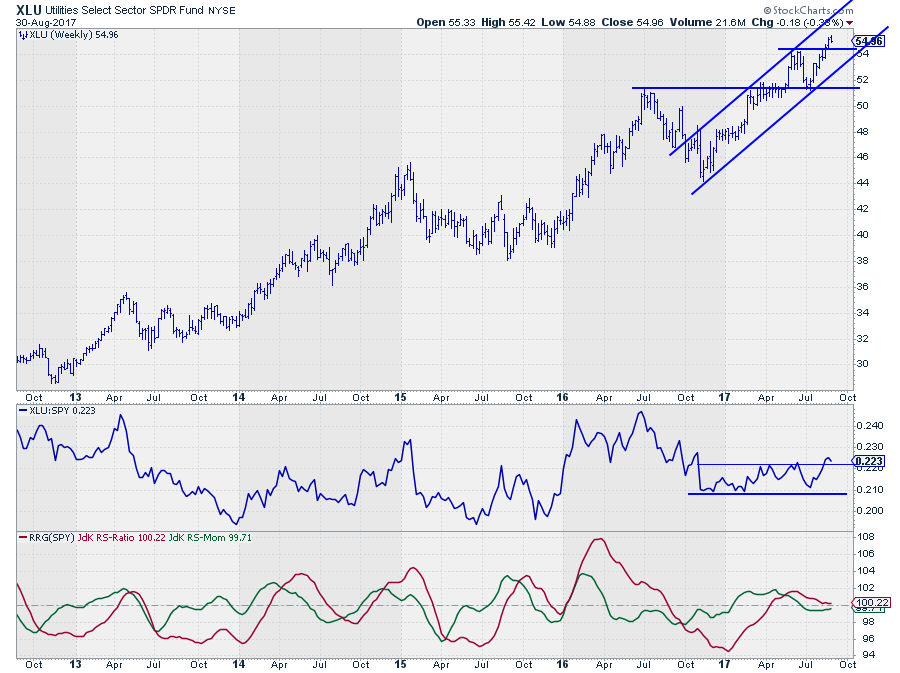 The relative strength line is more the opposite of XLI. Here RS has been coming down from its mid-2016 peak before it started moving sideways. That sideways movement is now on the verge of being broken to the upside. One could call it a break already but as it is a weekly chart and it is not Friday yet I'd be careful with that and I'd like to see a bit more follow through, but things are starting to look better now.

The RRG-Lines are responding to that improvement and after an initial rotation from leading through weakening in the first half of this year, XLU has now turned back up at a positive RRG-Heading and is underway to the leading quadrant again.

All in all, it looks like Utilities are ready for a period of outperformance over the S&P 500 index and against Industrials.

With regard to the two sector comparisons above a thought crossed my mind. With regard to the second pair, it is pretty clear that Industrials is a Cyclical sector while Utilities is defensive. I believe that we can all relate that that is still the case.

Based on that XLI/XLU rotation it looks as if we are going into or through a sector rotation to more defensive.

IF that is indeed the case, THEN the XLV/XLK rotation raises questions... as traditionally Information technology is seen as and used to behave as, a cyclical sector. While Health care was always more defensive.

I am inclined to believe that the classifications for XLI and XLU still hold. Does that mean that XLV and XLK have swapped places? Is Technology the new defensive?

Love to hear your ideas.

If you like to receive a notification anytime a new article is posted in this RRG blog please leave your email address and press the green "Notify Me!" button below this article.