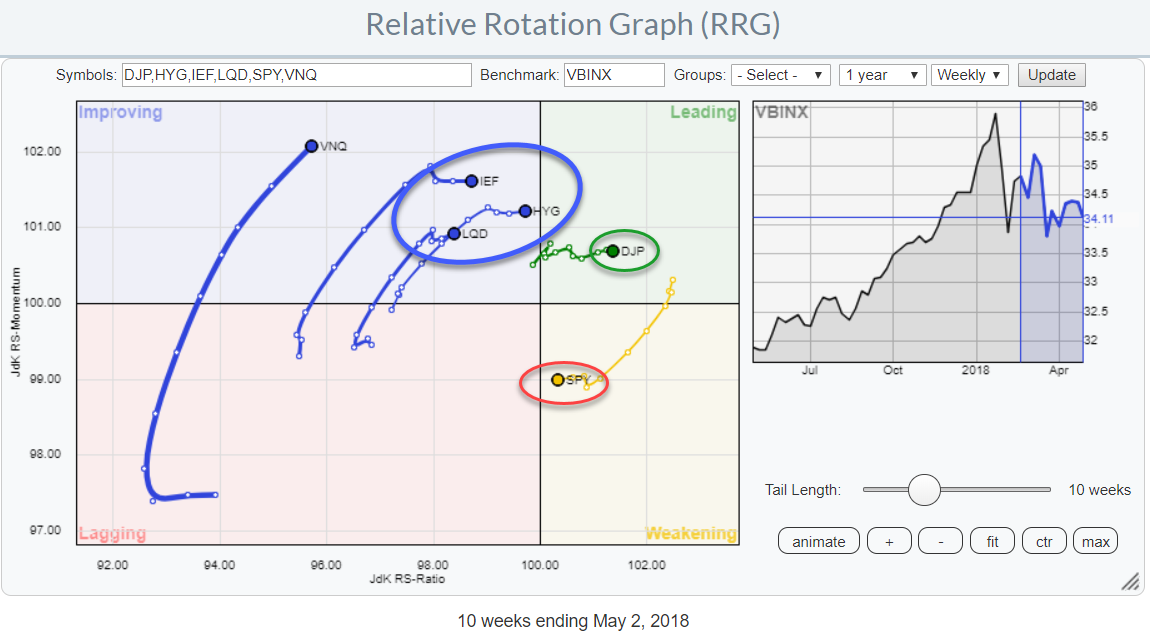 For a very long time equities have been the dominating asset class, stuck at the right-hand side of the Relative Rotation Graph showing six different asset classes.

That situation is now changing. Equities (SPY) is still at the right hand (positive) side of the RRG but inside the weakening quadrant, since seven weeks, and heading towards the lagging quadrant.

The only asset class currently inside the leading quadrant is Commodities and it is continuing higher on the JdK RS-Ratio scale at stable relative momentum.

Commodities has now taken over the lead position from equities. 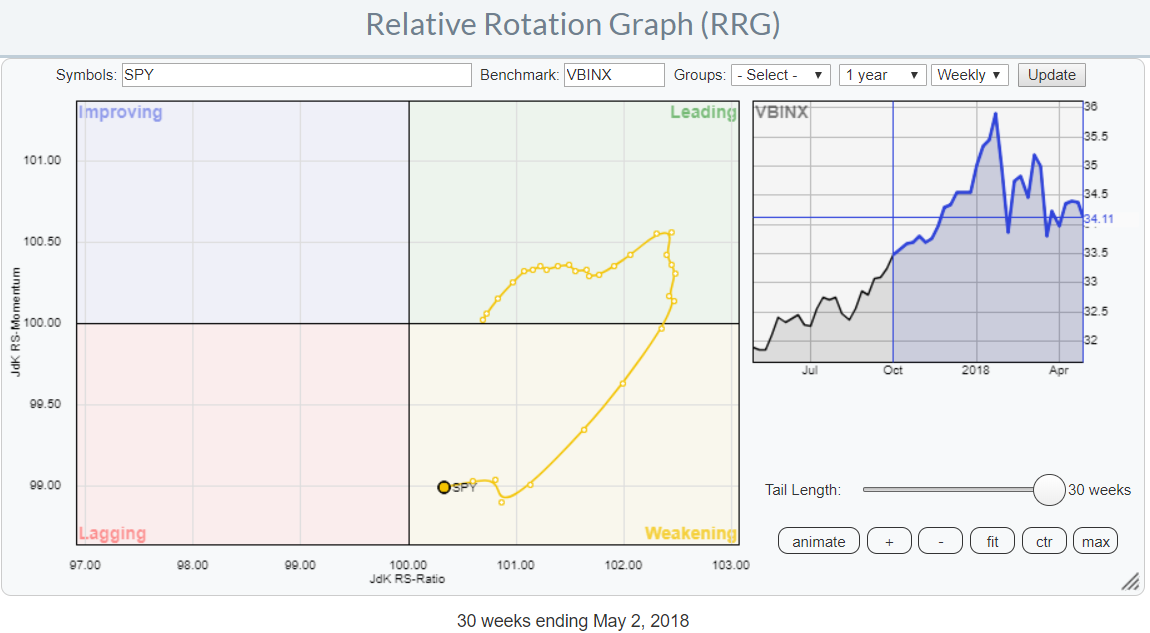 On the RRG, SPY is rotating through the weakening quadrant and heading towards lagging and very close to crossing over. Although the price chart of SPY as such is not outright negative (yet), the RRG at the top of this article clearly shows that equities as an asset class is losing against the other asset classes on the plot. The RRG above shows this in more detail and with a longer tail.

The weekly price chart of SPY in combination with the RRG lines shows the recent price and relative action on a regular chart. 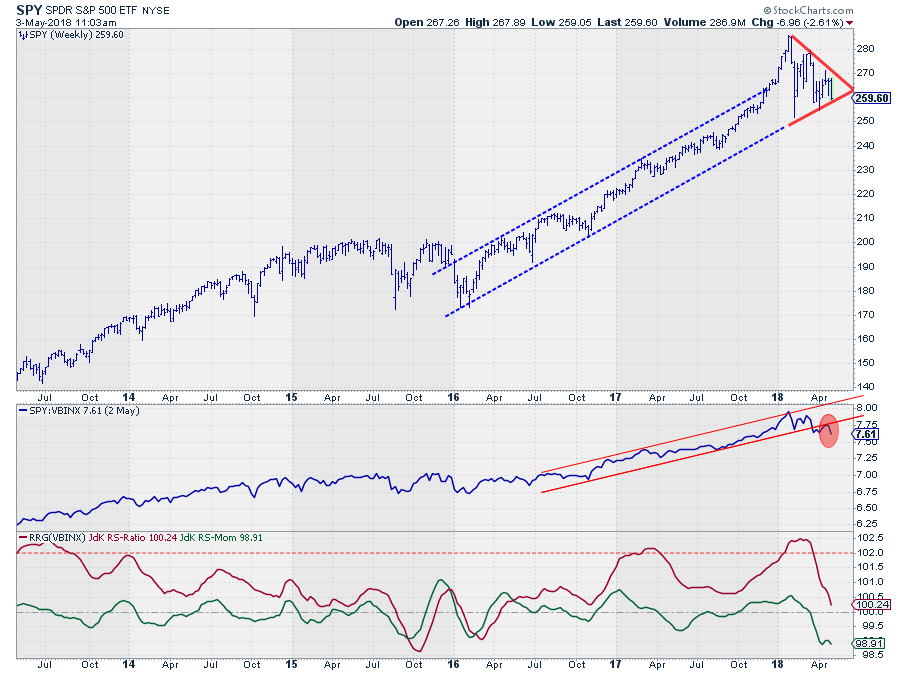 A few weeks ago the RS-line dropped out of its rising channel and later tested former support as resistance and just bounced down off of that level. The accompanying RRG-lines show that the RS-ratio line turned at a level where we have seen more RS-Ratio peaks in the past. And it is now following the JdK RS-Momentum line lower.

A drop below 100 for RS-Ratio, and thus a crossover into the lagging quadrant, seems only a matter of time.

On the price chart, a big symmetrical triangle seems to be forming and getting closer to a downward breakout. I am monitoring this closely as a symmetrical triangle after a prolonged up-move can be both a continuation- and a reversal pattern. We will only learn which one it is when the break on either side is visible.

If the signals from the relative strength against VBINX (the Vanguard balanced index fund) carry any significance than the odds are in favor for a downward break.

Below I have added a daily chart of SPY with the big triangle annotated in more detail. The support level to watch for a downward break seems to be the recent low at 254.67, say 254! At the other side of the equation levels around 270 would indicate an upward break negating the negative scenario.

There are three fixed-income related asset classes in this universe. IEF which represents US government bonds with a 7-10 year maturity. LQD which covers US investment grade corporate bonds and HYG that tracks US high yield corporate bonds. All three are showing a rotational pattern from lagging through improving and heading towards leading.

If I look at the individual price charts they are not particularly positive either.

However, when both equities and bonds decline but equities decline faster than these fixed income markets, they will still outperform! 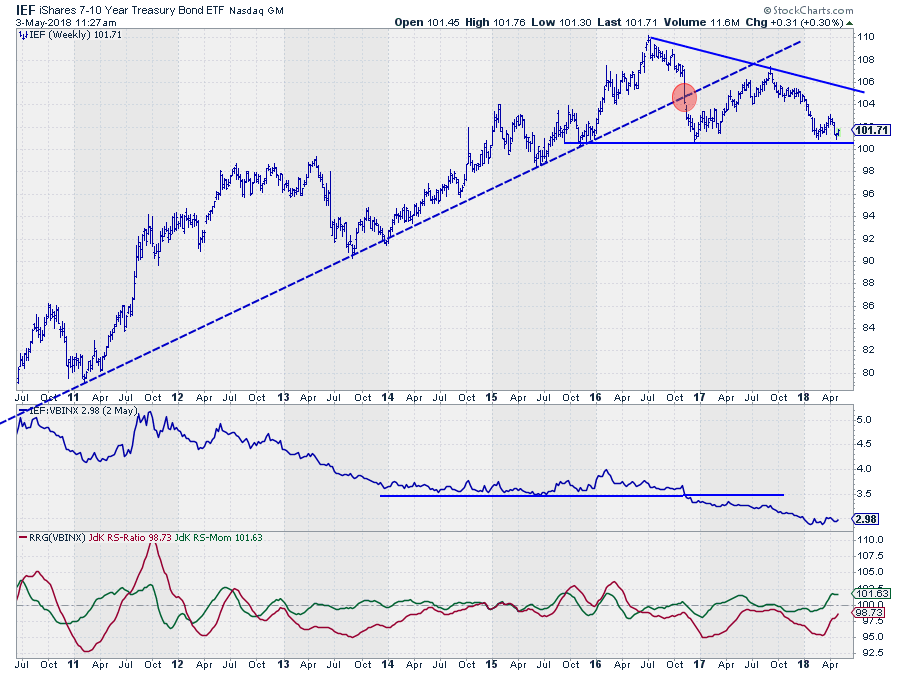 The IEF chart shows that US government bonds broke below their long-term rising support level at the end of 2017. Since then the level around 100 has emerged as an important support level. A break below will definitely serve as a trigger for further downside, probably accelerated.

The long-term relative strength against VBINX is still in a downtrend but since a few weeks a gradual relative improvement is becoming visible which is what is pushing the rotation on the RRG towards the leading quadrant. 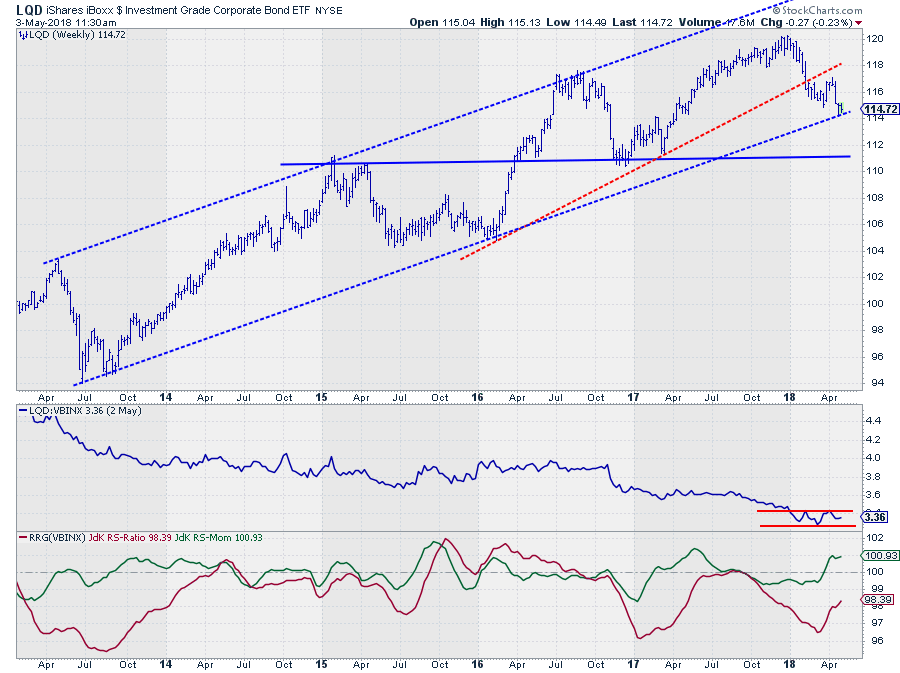 Depending on how you draw the rising support line, LQD is either still trading above it (blue dashed) or has just broken below (red dashed). I prefer the longer term over the stronger term as well as the fact that the blue dashed has a parallel brother running across the tops which the red dashed line does not have. Benefit of the doubt so to say.

No matter what support line you watch the picture is stronger than for Government bonds (IEF( as in either case the rhythm of higher highs and higher lows is still intact.

The recent improvement in relative strength against VBINX is what both IEF and LQD have in common. 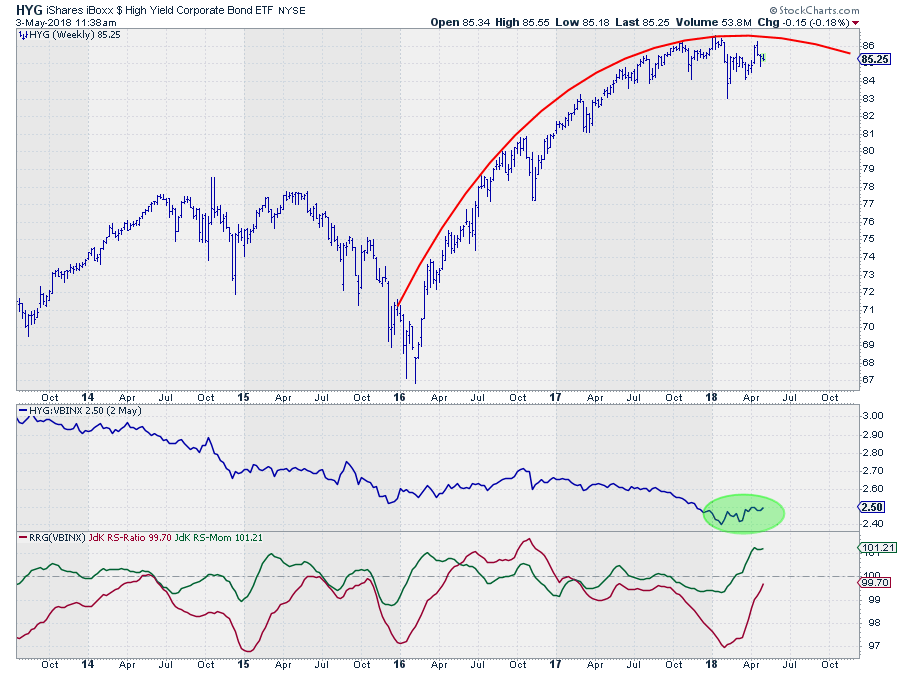 The HYG chart shows a pattern that looks like a developing rounding top.

Again not a very positive pattern from a price perspective but the relative strength against VBINX is improving since a few weeks which puts HYG inside the improving quadrant and underway to leading. 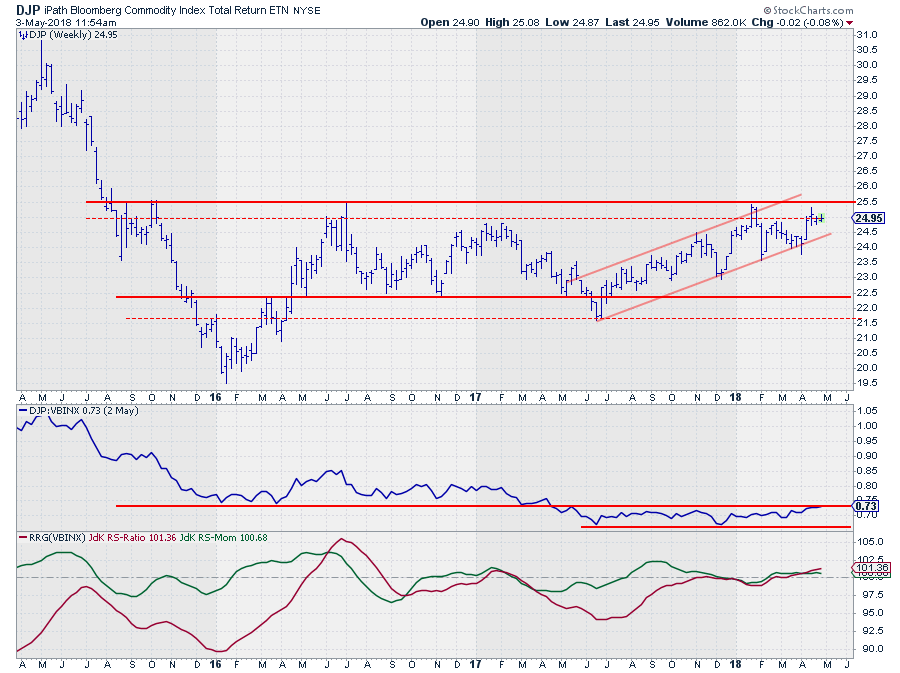 A few attempts have been made to break out of that range, but so far they were unsuccessful.
The relative improvement for commodities as an asset class in this universe is clearly visible on the Relative Rotation Graph.

The chart above shows that DJP has been moving higher in an up-sloping channel since mid last year and is now starting to push against the upper boundary of the range again.

With equities losing momentum a break beyond $ 25.50 in DJP could be the catalyst for an acceleration of the move and a further improvement for commodities.

If the situation occurs where both equities and fixed income start to decline together, commodities might offer a good alternative.

In a balanced portfolio, at least some allocation to commodities seems justified.